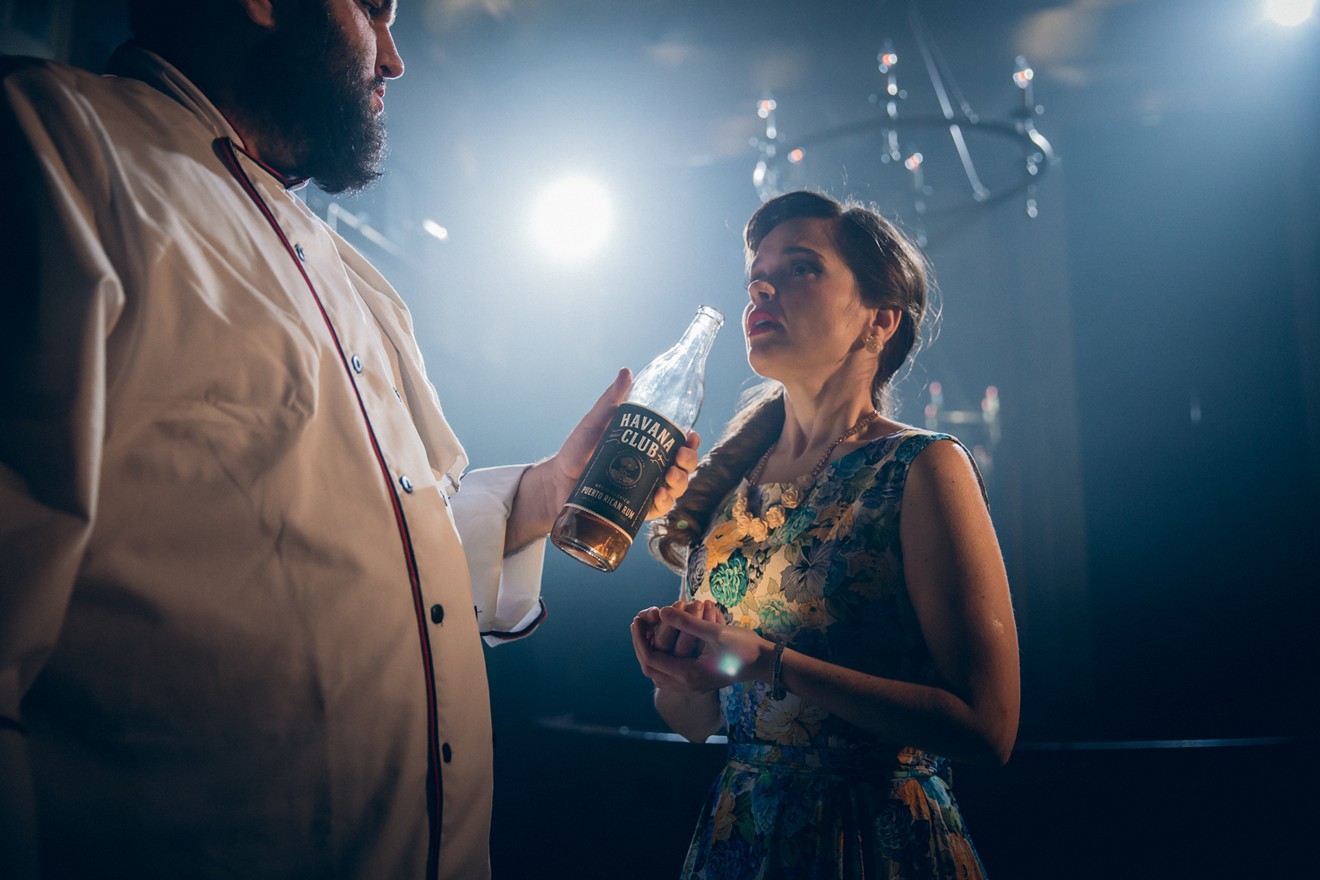 Bertha Leal plays young Amparo Arechabala, family to the founders of the real Havana Club Rum. Team Enterprises
On the corner of NE Second Avenue and 17th Street in downtown Miami stands an old villa enclosed by wrought-iron gates. On one side, there’s a hardware store, and on the other a modern-day fast-food joint. But step inside the villa, and you’re no longer in 2019 Miami. You’ve entered 1958 Havana, Cuba.

It’s breathtaking how real the sets inside this theater space look and feel. The entire first floor is basically a spacious bar, but once you head up some tiny winding stairs, you’re in another world entirely. Walk through an enormous tree trunk, and there’s a small apartment in one corner and a working fountain in another. Further down, a diva’s dressing room adjoins a lounge space complete with a stage and piano.

This entire set is for the upcoming immersive theater show called The Amparo Experience. The 90-minute production — which features five different "tracks," or stories, for guests to choose from — tells the story behind the popular rum brand Havana Club. The tale of the brand's origin has not been told until now. Although the method for sharing it is unique, the story will certainly resonate with Miami audiences.

A little over a week before the play opens, the actors are introduced to for the first time. New Times was invited to observe while the entire cast rehearsed a pivotal scene over and over again.

“The scene we’re rehearsing tonight is one that’s within the first half of the play and one of the spinal cord moments that the whole production together,” says its director, Victoria Collado. “It’s New Year's Eve 1958 in Havana, Cuba. The night before the revolution.”

Collado stands to the side of the room as her actors spill into the theater like water flows from a fallen cup, together at first and then spreading out like veins. In the middle of the scene, she stops an actor from completing his line. Clutching a half-burnt palo santo, she uses her hands to illustrate her point.

The actors nod, take a beat, and it’s back from the top.

“We like to call it experiential [theater rather than immersive] because we’re messing with senses,” says the director. “It’s about constantly bringing the audience into the scene — they’re a constant character; they’re not just a fly on the wall.”

Playwright Vanessa Garcia (left) with director Victoria Collado.
Team Enterprises
Collado likes to say that Vanessa Garcia, the show’s playwright, writes the way she thinks. Building this story from the ground up together has allowed the pair to transcend the traditional boundaries between writer and director — much like their show is untraditional. “Usually, I’ll just get a play and have to direct what’s on the paper... but here, we’re combining my director brain with Vanessa’s writer brain and listening to we’re in and merging everything together.”

Nearby, the petite Garcia blends into the crowd, distinguishable only by her laptop. She clutches the small device as if it were her modern-day clipboard. She bites her nails on the other hand as she watches her scene unfold, hearing the actors speak her words.

Garcia, an American-born Cuban, was first approached by Team Enterprise, the company that markets Havana Club rum, with the idea of doing a show about the Arechabala family. She was given one simple task: Do some research.

“Immediately, I was deeply interested in the story,” Garcia says from the corner of the set. “I’m a storyteller, so if I do not believe in a story, I do not tell it.”

When Amparo premiered in Miami last year, it was an hourlong show put on at Calle Ocho’s Ball & Chain, which was produced by Miami’s local Juggerknot Theater Company. After that, it had a brief stint in New York City, performed in a three-story building. And now, over a year later, the show has evolved into a 90-minute production, produced by Broadway Factor, that has taken over an entire building for a two-month run.

Garcia explains how the story itself transformed after each iteration. At Ball & Chain, the circular space inspired the writer to create a spinal cord narrative with smaller heartbeats surrounding it. “We would move people through these smaller vignettes and then back to the story,” she says. “In other words, Ramon and Amparo Arechabala are always in the story.”

When the production moved to NYC for a pilot run there, Garcia rewrote the show with six tracks, which later influenced the current version's five. The spaces inform the script, she says, adding that she delved deeper into her characters and story after New York.

“The characters continued to grow, and eventually some became new tracks of their own.”

Ramon and Amparo Arechabala played by Rene Granada and Bertha Leal.
Team Enterprises
Garcia, who holds a Ph.D. in creative nonfiction with a focus on Cuba, has been writing about the island of her parents for years, so this opportunity felt like one tailor-made for her. “All the things that I have researched in my life and also just experienced through my family were all training for this,” she says.

The actors feel the same way. Marcela Paguaga, a Miami-born Cuban who plays Margarita Maria Mendoza, says, “It hasn’t been hard for any of us to dive into the show because everyone in the cast is either Cuban or Cuban American, so we all share that connection to the story.”

Paguaga was part of the original cast and the 2018 pilots in Miami and New York. Now, returning to the all-so-familiar story, the actor says her character has undergone an incredible evolution. “When we first did the show in Miami [last year], Margarita started off as a wannabe dancer; she couldn't even get a solo,” she says. “And now she’s the main performer at Club Nautico. As an actor, it’s amazing to see her go through this huge change, not only in her career but physically, mentally, and emotionally.”

Margarita Maria Mendoza is featured in the Miguel track, one of two bilingual tracks and labeled the nostalgic route. “My track concentrates on time,” explains Paguaga. “You see the loss of time… and how with time things progress and things die.”

Standing in a hallway framed with -mâché trees, the actor admits being part of the production makes her forget the play promotes a rum brand. “Yes, Amparo is the origin story of the real Havana Club rum, but it’s also a story about exile and a story about tragedy and rebirth.”

“This isn’t about sticking your brand on something; it’s about the story,” playwright Garcia says. “The story does all the work here.”

The Amparo Experience. Thursday, April 4, through Friday, May 31, at 221 NE 17th St., Miami; theamparoexperience.com. Tickets start at $79.
KEEP MIAMI NEW TIMES FREE... Since we started Miami New Times, it has been defined as the free, independent voice of Miami, and we'd like to keep it that way. With local media under siege, it's more important than ever for us to rally support behind funding our local journalism. You can help by participating in our "I Support" program, allowing us to keep offering readers access to our incisive coverage of local news, food and culture with no paywalls.
Make a one-time donation today for as little as $1.