William Kentridge's Epic, The Head & the Load, Heads to the Arsht Center 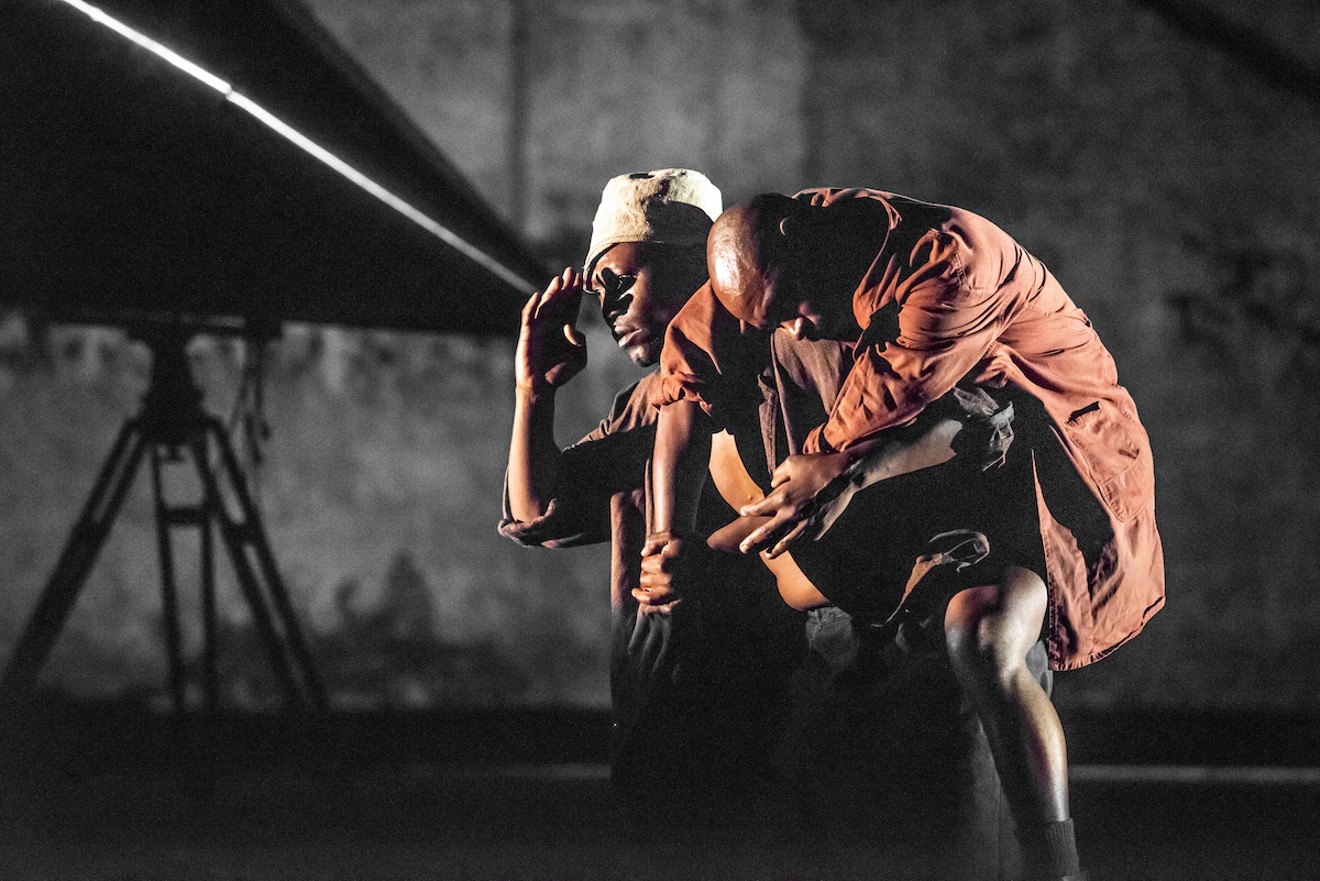 The Head & the Load captures the brutality of WWI but also finds moments of tenderness and beauty. Photo by Stella Olivier
It’s a production of epic proportions on every scale imaginable. More than a straightforward performance in the traditional sense, The Head & the Load is a protean pageant of shadow play, projections, music, and movement featuring 39 actors, dancers, singers, and other musicians, most of them from South Africa.

The production, opening Thursday, December 1 at the Adrienne Arsht Center for the Performing Arts, is the brainchild of William Kentridge, a whirlwind of a creator whose extraordinary output of film animations, opera adaptations, collage, sculpture, and charcoal drawings have put him firmly in the vanguard of international artists. In his four decades plus in the studio, he has developed an intriguing visual language of artistic techniques and of objects — megaphones, maps, rotary telephones, typewriters — that is instantly recognizable.

“A Kentridge is a Kentridge,” says Johann Zietsman, president and CEO of the Arsht Center. “It doesn’t look like anyone else.”

In 2018, Kentridge was commissioned to create a piece to be performed at the Turbine Hall of the Tate Modern for London’s commemoration of the centenary of World War I. At roughly the same time, he was invited to premiere a work at New York City’s cavernous Park Avenue Armory. Both called for something mammoth in scale.

“The formal thinking about space and performance in a way precedes the theme of the piece,” he says in a telephone interview from his native Johannesburg. “I know it sounds back to front, but the studio often works that way.”

William Kentridge's The Head & the Load is a massive collage of a performance told in music, dance, projections, and poetry.
Photo by Stella Olivier
He thus began an investigation into Africa’s involvement in the Great War. “It’s history that I should have known, but I didn’t know,” he says.

The British, he soon learned, had conscripted nearly one hundred thousand Black Africans to serve as porters in their campaign against the Germans in East Africa. These recruits, referred to as the Carrier Corps, were viewed as utterly expendable. Paid a miserly sum so as not to be considered slave labor, they were expected to be dead or of no use after a brief period of service hauling munitions and materiel across the dense jungle. When they died, they would simply be left behind, to be replaced by other nameless conscripts.

“In the end, [The Head & the Load] does have a very strong sense of this unknown history, what is it to elide histories and to make them disappear,” Kentridge says.

I asked Zietsman if a work of this magnitude and technical complexity had ever been produced at the Arsht Center. “Not in the history of the Arsht,” he says. “Not on this scale.” The audience will enter the theater through the loading dock and sit onstage with the performers, looking out in the direction the house would usually be. “The challenge is not just how we mount the show. We have to build risers for over 500 audience members... I’m looking right now at a thousand feet of trusses and miles and miles of cables. But when the curtain goes up, it goes up. That’s what we do.”

The title of the piece refers to an enigmatic West African proverb, one of many that adorn the walls of Kentridge’s Johannesburg studio: “The head and the load are the troubles of the neck.” “I couldn’t quite figure out what it meant,” Kentridge says. “It’s not only the physical load that bears you down but also the psychic load.”

Dancer Thulani Chauke, shown here, has collaborated with the Centre for the Less Good Idea since its first season.
Photo by Stella Olivier
Kentridge’s work has long interrogated systems of colonialism and oppression — and so did his parents’ work before him. His father, Sydney Kentridge, a legendary attorney and still alive at age 100, defended three Nobel Peace Prize recipients in the course of his career: Nelson Mandela, Desmond Tutu, and Albert Luthuli. His late mother, human rights lawyer and fierce anti-apartheid advocate Felicia Kentridge, cofounded Johannesburg’s Legal Resources Center. The ethical reverberations of his parents’ work, he says, “kind of disappear in the studio and maybe reappear in the finished work… No doubt that there’s a connection.”

His father would read the classics aloud to his children — everything from Greek myths to Victorian novels. As an adolescent, however, the son was more moved by Dada than Dickens. It was a fascination that would stay with him until this day.

The quality of those performers, Kentridge would tell you, is the secret to his success.

“I’m very good at choosing collaborators,” he says. He has worked with composer Philip Miller for more than 25 years and with the extraordinary Belgian costume designer Greta Goiris for 17; Australian singer/actor Joanna Dudley has been with him for seven. Thuthuka Sibisi, musical director and co-composer, and choreographer Gregory Maqoma are more recent additions to Kentridge’s artistic tribe, which developed The Head & the Load together at the Centre for the Less Good Idea, an arts incubator he created in 2016 in downtown Johannesburg. “Apart from the orchestra and the chorus, the main roles, both danced, sung and acted, were created by the people who now perform them... There’s a real agency of everyone in it, making the piece together.”

Outsized shadows cast by objects and performers are part of the visual language of William Kentridge's The Head & the Load.
Photo by Stella Olivier
He says some elements change each performance.

"People have to be very aware and sensitive to where they are and what's happening on the stage and how they relate to the other people because it's never the same. There are too many people and too many moving parts to set it precisely," he says.

Even for a seasoned creator like Kentridge — who has seldom met an artistic limb, he wasn't tempted to stroll out on — this production is a devilishly ambitious work.

"At the moment, our crisis for today is that our container with everything we need in it is still stuck at Jacksonville… there's a snarl-up at the ports, so they have to U-Haul it down piece by piece." Add to that the challenge of arranging for U.S. visas for close to 60 South African artists and technicians, and you have an idea of the logistical heavy lifting a production of this scale entails.

In a twist that is as worthy of Dada's absurdist vision as anything else, the production owes its Miami run not just to the generosity of diehard arts patrons like Valerie Dillon and Dan Lewis but also to Knoxville's Roy Cockrum, the former actor and one-time Episcopalian monk who used his 2014 Powerball winnings to create a foundation to promote theater on a grand scale here in the U.S.

One can only imagine what the Dadaists, with their manifesto, would have made of that.

The Head & the Load. 8 p.m. Thursday, December 1 and Friday, December 2; and 2 p.m. and 8 p.m. Saturday, December 3 at the Adrienne Arsht Center for the Performing Arts, 1300 Biscayne Blvd., Miami; 305-949-6722; arshtcenter.org. Tickets cost $50 to $175.
KEEP MIAMI NEW TIMES FREE... Since we started Miami New Times, it has been defined as the free, independent voice of Miami, and we'd like to keep it that way. With local media under siege, it's more important than ever for us to rally support behind funding our local journalism. You can help by participating in our "I Support" program, allowing us to keep offering readers access to our incisive coverage of local news, food and culture with no paywalls.
Make a one-time donation today for as little as $1.
ArtburstMiami.com is a nonprofit source of theater, dance, visual arts, music, and performing arts news.