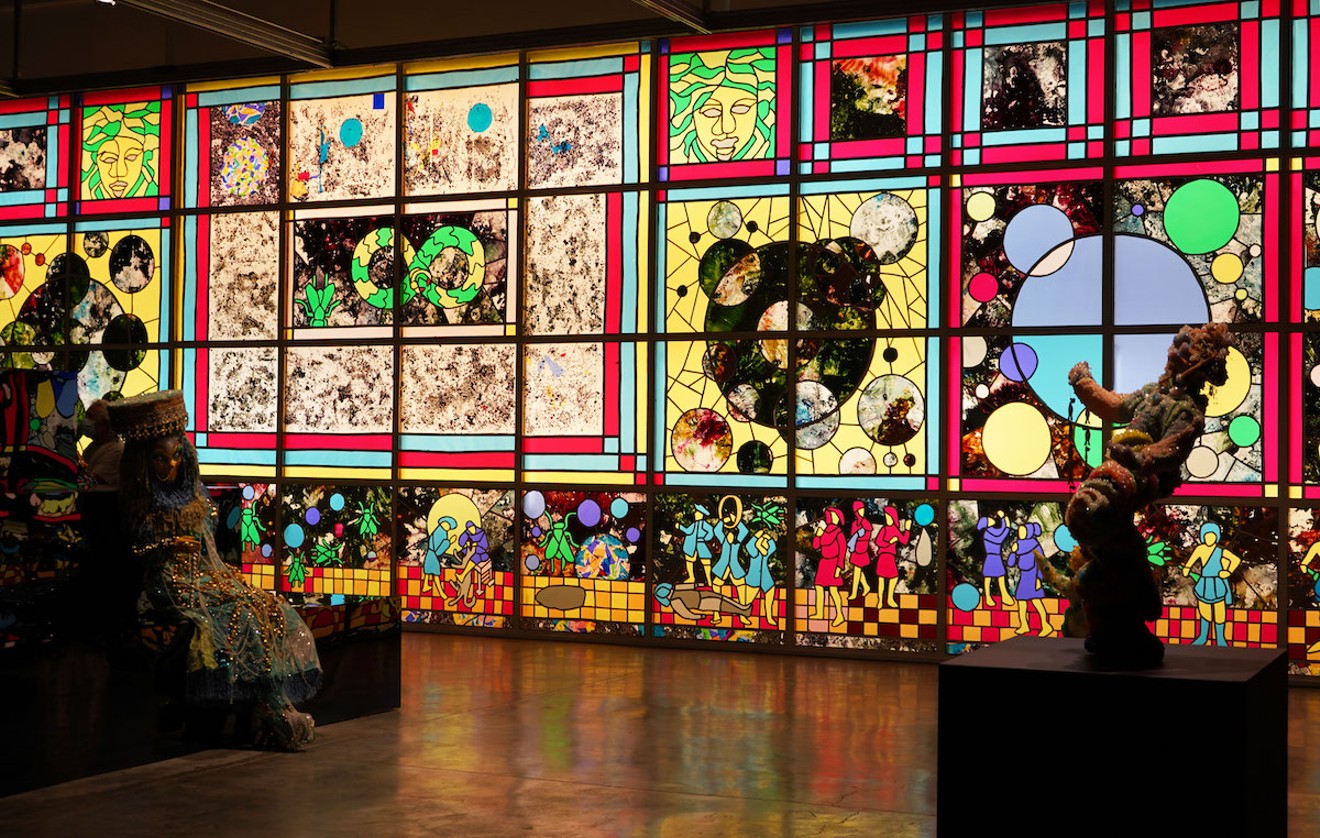 Raúl de Nieves' installation at the Museum of Contemporary Art, North Miami. Photo by Isabella Marie Garcia
The physical palpability of texture and the act of performance are two elements of life that we've been starved of for the time being.

Touch and live performance form the core of Raúl de Nieves' work as a multidisciplinary artist and performer, making his current exhibition, "Eternal Return and the Obsidian Heart" at the Museum of Contemporary Art North Miami (MOCA), all the more powerful as it throws the viewer into the celebration and cyclicality of life at its fullest.

From figurines cloaked in elaborate costumes to a carousel that spins continuously and a 60-foot, stained glass-like mural that flanks half the exhibition's length, the full spectrum of De Nieves' range as a multimedia artist is on display in the comprehensive survey. Raised in Michoacán, Mexico, and later in San Diego, De Nieves, who's now based in Brooklyn, grabs from his Mexican heritage and upbringing and merges it with his own definition of queerness and self-identity through his experience of moving to San Francisco and diving headfirst into the drag scene.

Day(ves) of Wonder (left) and Celebration
Photo by Isabella Marie Garcia
“I’ve been very fortunate to have this upbringing where, when I left Mexico, there was this consistent sense of self-expression through these rituals I would see constantly, either through folkloric dance or the outfits worn in these performances," De Nieves tells New Times. "When I lived in San Diego, I felt like I was missing something until I found the punk scene. It was an entirely different type of performance, but one I craved.

"In moving to San Francisco, my intention was to be around more people who thought similarly like myself in the LGBTQ+ community," he goes on. "Through the inspiration and courage of seeing others performing drag in order to gain this sense of self-acceptance — it’s exuberated from all these places I’ve grown up in to influence my work.”

As you walk throughout the exhibition space, the performative aspect is apparent in videos that show De Nieves performing with his art-rock band, Hairbone, and in collaborative pieces performed with various artists and musicians. The costumes placed atop a ziggurat in Fina (2019) transform from a passive act of beauty and adornment into an active reclamation of beauty in the eye of the beholder, as De Nieves literally removes the costumes from the mannequins to wear them in his own performances.

The exhibition, assembled by Risa Puleo, an independent curator, critic, and art historian based in Chicago, is a collaboration steeped in a mutual understanding of Mexican history. Its title, for instance, emerged from exchanges between Puleo and De Nieves during its initial stages more than a year ago.

Raúl de Nieves' installation at the Museum of Contemporary Art, North Miami.
Photo by Isabella Marie Garcia
“We started collecting these words that would embody the message of the exhibition — how the show is about these different cycles of time, from developmental growth stages to the seasons and cosmic or celestial times, as well as the element of ancestors and familial lineage," Puleo says. "It’s such a complex idea to think about how time is moving in all these different forms at the same moment, and, as Raúl constantly notes, there’s only so many experiences we have, but we relive these experiences as different people as we grow and change. We came to the idea of the eternal return: a succinct phrase to really describe this philosophical idea.”

"Obsidian heart," the curator explains, refers both to the volcanic glass imitated on the ziggurat and to a historical account of colonial dissonance. In pre-Columbian cultures in Mesoamerica, members of the indigenous cultures crafted mirrors of obsidian to see themselves reflected but also as spiritual portals through which to speak to their ancestors. Hernán Cortés stole one of the mirrors in the 1520s and brought it back to Europe as a gift to Queen Elizabeth I, who passed it along to her astrologer, John Dee, who devoted his life to unlocking the mystery of how the Aztecs used the glass-like substance to communicate with the dead. (He failed.) The enduring human fascination in communicating with those who have lived before oneself, says Puleo, is at the core of the exhibition and of De Nieves’ work.

“In these early days of colonialization, they believed in this Aztec technology and this interest in speaking to the dead and how to communicate with other realms," the curator says. "It’s a very Mexican, pre-Columbian technology and one that we still are trying to understand and harness in our own way."

Fina Fantasy (left) and The longer I slip into a crack the shorter my nose becomes
Photo by Isabella Marie Garcia
With South Florida museums opening up gradually, the evolution from stasis to a commotion is one MOCA executive director Chana Sheldon welcomes.

“We’ve managed to maintain our programming virtually, through education-based workshops and fully-online conversations with Miami-based artists and curators," says Sheldon. "Aside from a public-art installation we had on the museum plaza, this is the first exhibition to welcome the local community back to the museum, and one we hope will provide a safe return back to visiting exhibitions in-person.”

Amid the revival of museum exhibitions comes the bittersweetness of a show that encapsulates the exuberant celebration of life as well as the ouroboros — its cyclical nature.

“It’s like we’re waiting for the skeleton to rise out of the coffin," De Nieves says. "Regardless, this exhibition is a milestone in my career. To have this survey during this time, while accepting all the consequences of this time, it’s incredibly emotional. There’s happiness, and there’s melancholia, but at the end of the day, this is happening. I hope visitors take away something personal about the cycles of life that we universally pass through.”

Raúl de Nieves' "Eternal Return and The Obsidian Heart.” Through Sunday, March 21, 2021, at Museum of Contemporary Art North Miami, 770 NE 125th St., North Miami; 305-893-6211; mocanomi.org. Tickets cost $10, students and seniors $3.
KEEP MIAMI NEW TIMES FREE... Since we started Miami New Times, it has been defined as the free, independent voice of Miami, and we'd like to keep it that way. With local media under siege, it's more important than ever for us to rally support behind funding our local journalism. You can help by participating in our "I Support" program, allowing us to keep offering readers access to our incisive coverage of local news, food and culture with no paywalls.
Make a one-time donation today for as little as $1.