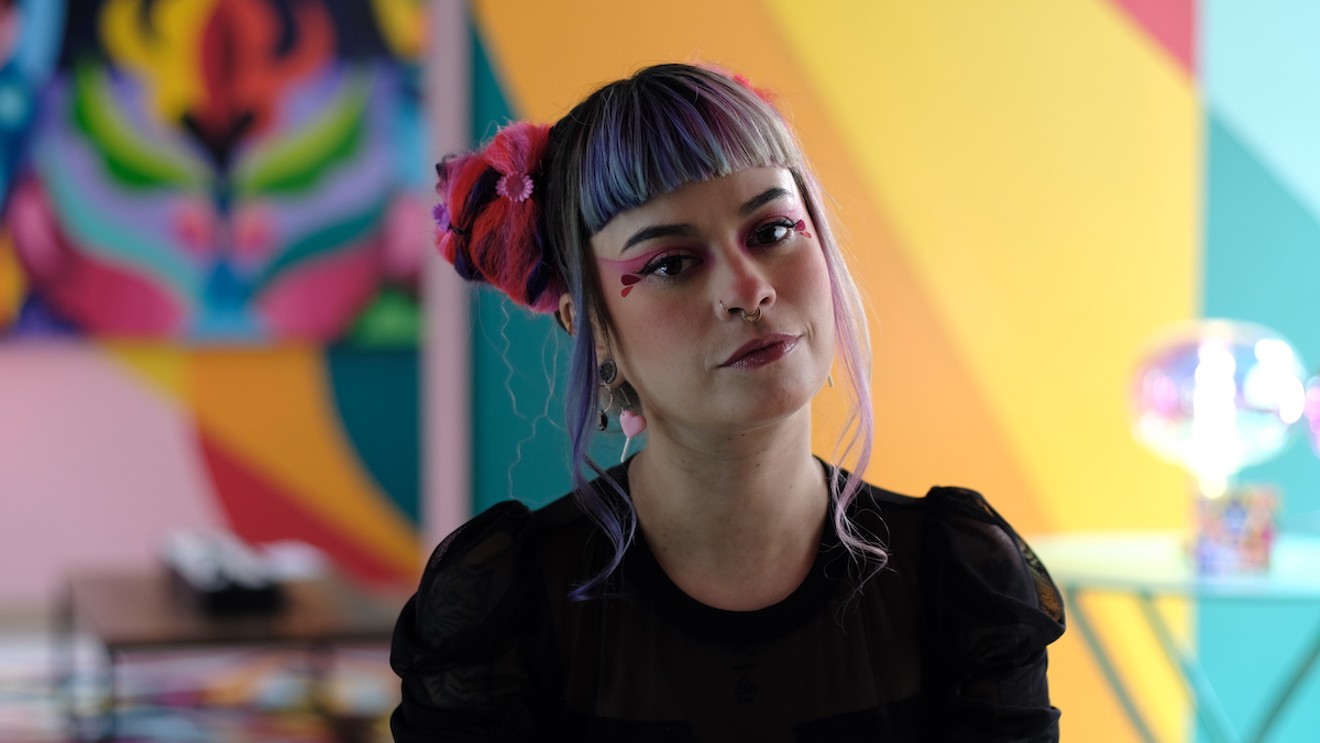 Coming from an artistic household, she found her curiosity for the visual arts sparked at an early age, and by 16, she was already showcasing her work in local galleries. Now, the world-renowned graffiti artist and muralist brings her talents to Wynwood's Museum of Graffiti.

Opening on September 22, "Private Spaces" serves as a culmination of Ledania's Latina identity, her surrealist artistic style, and the idea of the interactions between public and private spaces. According to the artist, the intersection between private and public spaces is at the heart of graffiti.

“I think a lot of the time about getting out of the gallery and coming back inside the gallery, to painting without permission and painting with permission,” Ledania says. “I want to do installations, but as well, I want to do art pieces that express all the colorful stuff I have in my background as a Latin-American girl. So it’s interesting because I want to invite people to this private space, my own space, in a public space that is the museum.”

Ledania (born Diana Ordóñez) — whose artistic name is a mashup of Leda, the famous woman seduced by Zeus in Greek mythology, and her birth name — first began experimenting in high school covertly painting on walls. Because the school's administration frowned upon the practice, she had to keep her work a secret. In the meantime, she also began working on a wall at a nearby gallery, where she met someone who would turn her on to spray cans.

Colombian artist Ledania's work looks at the intersection of private and public spaces.
Image courtesy of the artist
“I started painting this wall with a brush and this punk guy with a skateboard comes up to me and says, ‘You’re so stupid because you take so much time to paint this with a brush. Why don’t you use spray cans?’” she remembers. “To be sincere, I didn’t use spray cans really well, and at that time, I was a student, so I didn’t really have any money to buy them. But eventually, we went to a gallery where my cousin was one of the owners and he had a lot of spray cans he didn’t use, so we got to ‘steal’ some.”

When her new friend told her to tag her work, she instinctively signed it Ledania — though she admits she wasn’t entirely sure what tagging was. She was used to the idea of signing off on her work at school.

From there, she joined a group of graffiti artists that allowed her to truly experiment and find her own voice in her work away from her school-trained background. She was also the only woman in the crew, which allowed her to focus on the nuances of her identity while crafting her style.

“If you see my thesis, it was all in black and white because we didn’t have enough colors, and I had no idea how to use [spray cans],” Ledania says. “I was literally doing what I do in a sketchbook on the walls. But then, with the changes of colors, I started to create my own style because now I have new alternatives. Then I realized I don’t like to do realism or copy an image. Sometimes it’s everything that comes from my imagination, and I feel free doing that.”

As her style and voice started to develop, Ledania began to take her art all over the world. In fact, she credits traveling with helping her develop her artistic process to the fullest extent.

Ledania found her style and voice while traveling the world.
Image courtesy of the artist
“I think everyone has a process, and for me, I feel meeting other artists around the world started to change my mind,” she says. “I’m very much a lover of traveling. I enjoy the opportunity of finding out about other cultures and bringing a little bit of my art to those spaces.”

Her travels have now brought her to Wynwood, an area where she has had her eyes set for a while. With family in the U.S., including her aunt, who was once an illustrator for the New York Times in the 1950s, and a close friend from Miami in Colombia, she was able to visit Miami's arts district several years ago. After carefully making efforts to visit several galleries and exhibitions in the city, Ledania eventually made contact with Allison Freidin, cofounder of the Museum of Graffiti.

For the museum, featuring Ledania is an equally exciting venture. Freidin says her gallery is constantly looking to highlight artists with intersecting identities that have something profound to say through their work.

“I think that [this exhibit] provides us an opportunity to show the range and the scale of how many people are practicing this art form to new levels and adapting it in new ways,” Freidin says. “This show is especially important because it’s going to be launching in the middle of Latin History Month, so I think it’s really important for all institutions in Miami to be celebrating diversity.”

Ledania wants visitors to walk away with an understanding of just how much their lives and her work as an artist overlap.

“I try to make people feel different with my art, that’s what I want to transmit,” she says. “I want people to understand that my art can be yours at the same time. I might be thinking of my art outdoors, but if you want to put it indoors in your private space, I’m going to be a part of it. That’s the present of art — that people can enjoy it as an experience.”

"Ledania: Private Spaces." Thursday, September 22, through November 18, at Museum of Graffiti, 276 NW 26th St., Miami; 786-580-4678; museumofgraffiti.com. Tickets cost $12 to $16. Monday through Friday 11 a.m. to 6 p.m., Saturday and Sunday 11 a.m. to 7 p.m.
KEEP MIAMI NEW TIMES FREE... Since we started Miami New Times, it has been defined as the free, independent voice of Miami, and we'd like to keep it that way. With local media under siege, it's more important than ever for us to rally support behind funding our local journalism. You can help by participating in our "I Support" program, allowing us to keep offering readers access to our incisive coverage of local news, food and culture with no paywalls.
Make a one-time donation today for as little as $1.