Francisco Masó Connects the Political and the Personal at Dimensions Variable 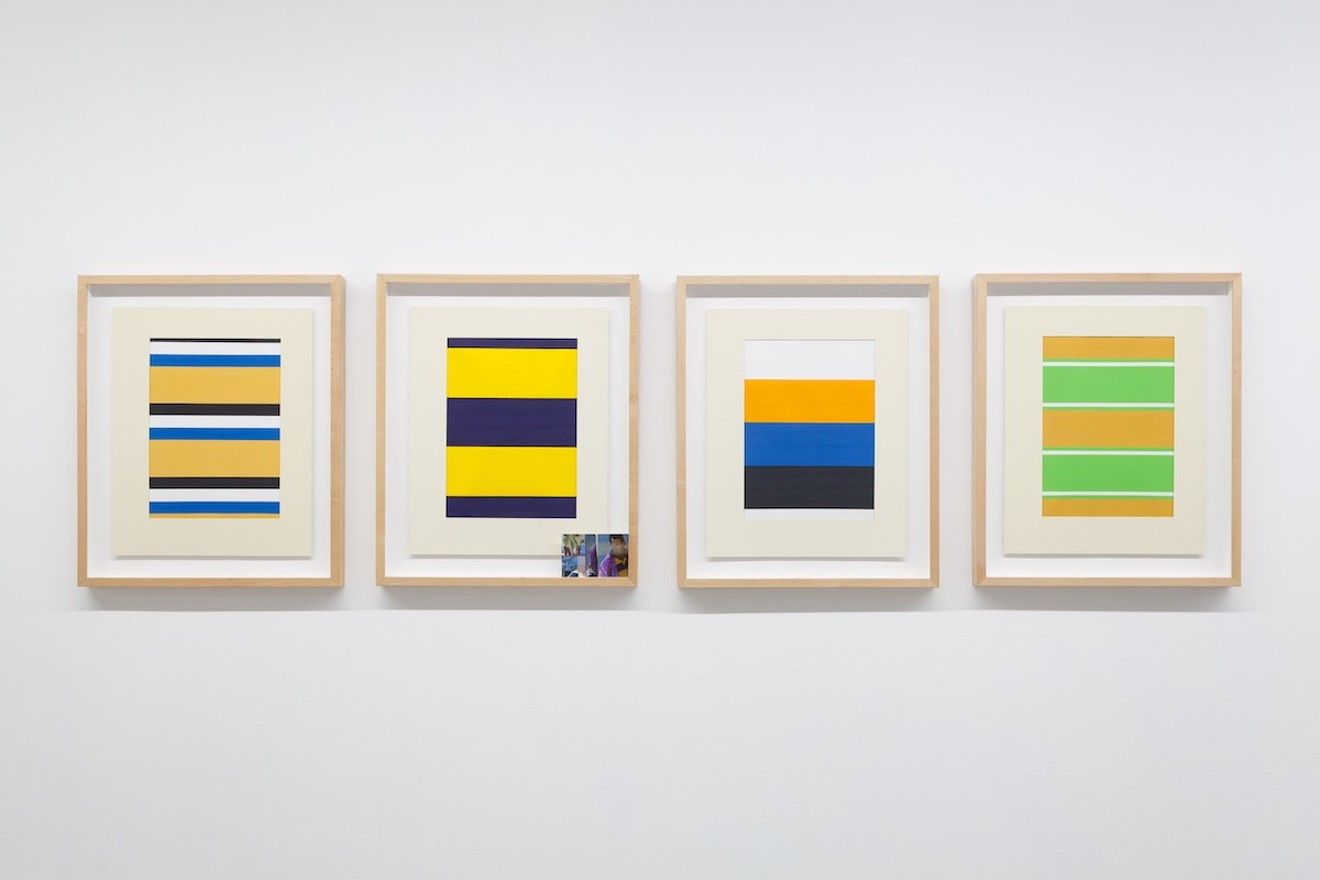 Installation view of "Who Kills Ai Weiwei" by Francisco Masó at Dimensions Variable Photo courtesy of Dimensions Variable
Miles across the sea from Havana lies the glorious swampscape of South Florida's Everglades National Park — a jarring contrast to the hustle and bustle of Cuba's capital city.

For Miami-based artist Francisco Masó, his Cuban roots and lived experience on the island nation form just a sliver of the foundation for the questions and research that filled his one-month residency at the Artists in Residence in Everglades (AIRIE) program in May 2022. AIRIE awards artists the opportunity to think creatively and critically about their impact on environmental, climate, and racial justice through a month-long stay and live-work residency within the national park.

With access to the park's resources in the form of researchers and the opportunity to live directly within the still beauty of the land and its creatures, this year's theme of "how to make the outdoors a space of belonging" fueled the continuous dialogue of Masó's investigation of political art as a vehicle to explore the concept of power between civilians and the police system within both the United States and Cuba.

"During the one-month residency in the Everglades, I had enough time to research and solidify my thoughts on political art," Masó explains. "While researching the presence of the Afro-Caribbean and African-American communities in the Everglades and its relationship with the pink bollworm infestation in the wild cotton plants, I read books about Marc Rothko, art conservation, and dry pigments."

Following the month's tenure, Masó was the inaugural recipient of the DV-AIRIE Award, allowing him to use his gathered research to create an exhibition at Dimensions Variable. Currently on view, "Who Kills Ai Weiwei" opened in June in Dimensions Variable's main gallery, showcasing Masó's small-format acrylic on canvas works and larger-scale paintings. 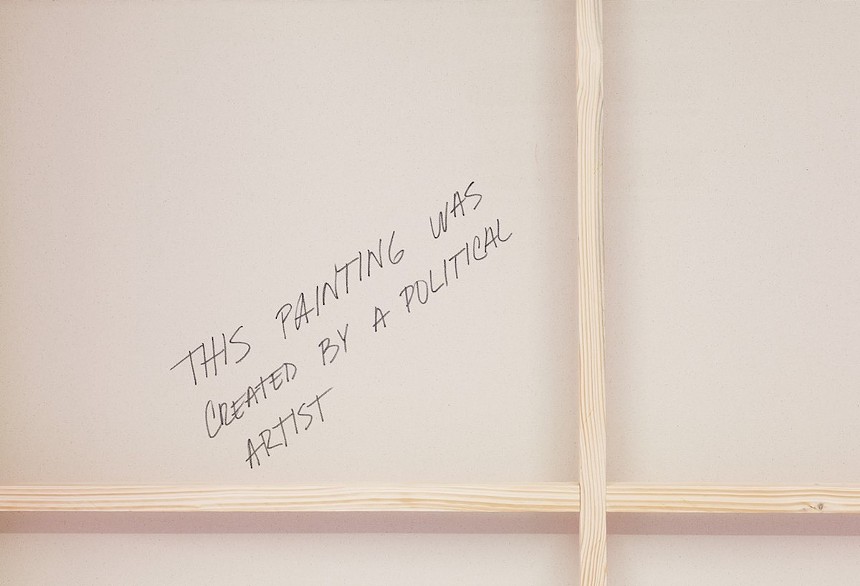 The verso of a canvas at "Who Kills Ai Weiwei"
Photo courtesy of Dimensions Variable
The exhibition's namesake, dissident Chinese artist Ai Weiwei, is an entry point into the thematic arch of the show: the role of the political artist in the scope of current government regimes and socio-political narratives and the role contemporary art plays. Known for his open distaste and resistance against the Chinese government's stance on human rights and democracy as a structure, Beijing-born Weiwei utilizes his practice as a means to reflect on his own political convictions and comment on the responsibility one has, especially as an artist, to reflect the times one lives in and how the present situation affects those around us.

"Ai Weiwei embodies the iconography of the political artist worldwide," Masó says. "Probably China's most famous living artist and its most visible political dissident, he has denounced government corruption and human rights violations in the country. Because of his openly critical position to the Chinese Communist leadership and advocacy for democracy and freedom of expression, he has been arrested, beaten, isolated, and prohibited from traveling outside China.

"For me, it was crucial to offer certain codes that could widen the frame of interpretation regarding the exhibition topic to different audiences. Ai Weiwei is a metonymic resource to reflect on the ethical sense of political art in front of the totalitarian systems' politics and on the civic responsibility of the political artist in the process of knowledge production and imagination."

Throughout the exhibition, Masó's own spin on the political artist and the heavy responsibility it presents in resisting regimes and ruling powers is reiterated through a series of acrylic on canvas works titled "Aesthetic Register of Covert Forces," juxtaposing a seemingly simple and colorful geometric striped sequence with a photograph from his Cuban homeland. Following last summer's violent political turmoil and sharp economic downturn, approximately 140,000 Cubans fled the island. The photographs selected by Masó are public domain images that depict secret agents and Cuban government officers enacting policing tactics and surveillance control on citizens and dissident groups throughout the island. 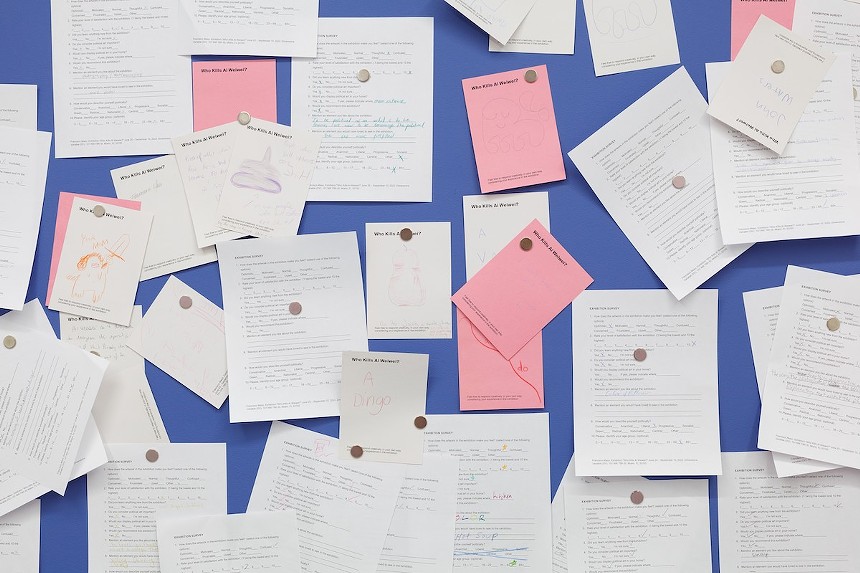 The interactive element of "Who Kills Ai Weiwei" has visitors fill out a survey.
Photo courtesy of Dimensions Variable
"The photograph is not a mere aesthetic gesture, but the expressed intention on my end to share hidden information for all to see and learn to decodify the strategies of surveillance we face in our daily lives," Masó explains.

Amplifying in scale and thematic intensity, the minuscule abstract languages of policing grow into three larger-size paintings where Masó then incorporates affirmative statements of personal agency. Phrases such as "This painting may not be displayed by an authoritarian regime" and "This painting was made during the dictatorship" are subtly placed in dark ink against an earth-tone palette to reaffirm Masó's own artistic and civilian independence from those seeking to suffocate resistance. As one turns around the wall in the middle of the space, the traditionally obscured back of the canvas is revealed to be littered with a scrawling of text across its surface. "This painting was created by a political artist" is just one of the personally written assertions made by Masó about political activism within contemporary art.

With the gravity of the exhibition on the shoulders of its visitors, a survey adds an interactive element that asks numerous questions on how those in the space are emotionally and mentally processing the showcase. Each individual is encouraged to reflect on their own lived experience and political alignment, reiterating the artist's core message throughout the exhibition that no one is immune to the actions of those in power or absolved of civic responsibility and agency.

"Who Kills Ai Weiwei." On view through September 10, at Dimensions Variable, 101 NW 79th St., Miami; dimensionsvariable.net. Admission is free. Thursday and Friday 1 to 5 p.m. and by appointment.
KEEP MIAMI NEW TIMES FREE... Since we started Miami New Times, it has been defined as the free, independent voice of Miami, and we'd like to keep it that way. With local media under siege, it's more important than ever for us to rally support behind funding our local journalism. You can help by participating in our "I Support" program, allowing us to keep offering readers access to our incisive coverage of local news, food and culture with no paywalls.
Make a one-time donation today for as little as $1.