Caraboom Drenches Audiences with a Ton of Pizzazz Caraboom isn't your average car wash. Photo by Nathaniel Shannon
If you drive in for a performance of Caraboom at Miami Dade College's Wolfson Campus this weekend, don't be alarmed if one of the show's characters greets you with a large magnet attached to a thick rope. Soon enough, they stick the magnet to the hood of your car and "pull" you into a designated parking area, where you'll be given instructions on how to use your vehicle's blinkers, turn signals, and horn to become part of the show.

Caraboom director Natasha Tsakos once performed during the Super Bowl with Cirque du Soleil, and the contemporary circus' influence is evident in this project. Reminiscent of Cirque's Ovo, Caraboom's first act has its many characters playfully whisk through their assigned spaces like ants, creating their own form of language amid improvisational movements while reciting — often gibberish and other times coherent — existential poetry. The next scene organically transitions as the characters come together for a synchronized dance.

Dubbed "the greatest car wash show on earth," Caraboom is a titillating disco journey that utilizes human water fountains, bubble machines, and foam cannons that are a soaking hazard to those seated in the designated splash zone. (Though splash-zone audiences are provided raincoats, be prepared to get soggy.) Encouraging the audience and passengers to meditate and boogie throughout the show's 45-minute runtime, the show functions as a cleanse of sorts. Not just a vehicular or bodily one, but mainly as an embodiment of a soulful spiritual purge or restoration. 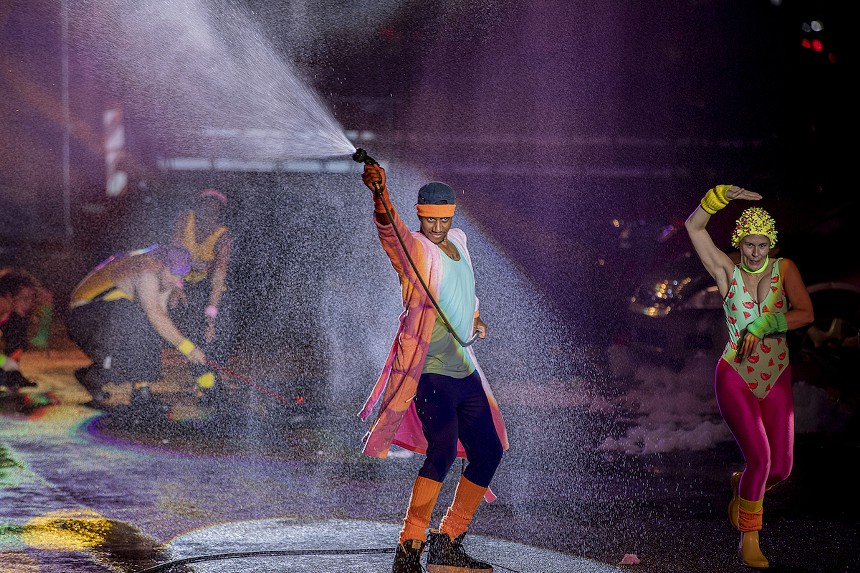 Prepare to get wet during Caraboom.
Photo by Nathaniel Shannon
"Caraboom is the much-needed boost of joy that we all need after two tumultuous years of pandemic life," says Kathryn Garcia, Live Arts Miami executive director. "Live Arts Miami is thrilled to be part of this extraordinary project that will bring some foolish fun into people's lives while reinventing how and where performances happen in 2022 and beyond."

It's no mystery that humans crave connection, and this show urgently gives attendees a form of necessary escapism during these still-unsettling times. The space, which occupies a parking lot on MDC's downtown Miami campus, offers a multitude of ways for spectators to appreciate not just their surroundings but also the other people around them.

"We are on a mission to scale joy," Tsakos adds. Caraboom's performers lean into the absurd.
Photo by Nathaniel Shannon
Running through Sunday, April 10, the show, produced by Live Arts Miami and funded by a Knight Foundation New Work grant, transforms the college's parking lot into a dynamic landscape equipped with outlandish comedic stints and colorfully orchestrated acts of absurdity. The ability to establish a sense of community where the people involved are releasing stress and ingesting gratitude is a spectacular thing. Caraboom offers up that kind of atmospheric kaleidoscope.

A multidisciplinary artist and film director, Tsakos brings a plethora of originality, birthing new ways of communicating through sound, vernacular intonations, expression, and prose. There's a romantic semblance when the 16 characters come together to spew disjointed phraseology and babble jabber at the mike. You may not understand it, but the atmosphere is still captivating; it's like watching a foreign film sans subtitles.

The show also beautifully embodies modern car wash mechanics without actually getting your car scrubbed down. Audiences are welcomed to partake in Tsakos' exuberant ride from the Boom Zone (for a comprehensive view of the show on bleachers), Splash Zone, or the VIP section. There's a romantic semblance when the 16 characters come together to spew disjointed phraseology.
Photo by Nathaniel Shannon
The show is soundtracked by recognizable tunes like "Keep Smilin', Keep Laughin', Be Happy" by Doris Day, "Love to Love You Baby" by Donna Summer, and "I'm So Excited" by the Pointer Sisters, which only adds to the vibe. The songs play a central role in Caraboom's storytelling, helping to paint a picture that coincides with every performance — be it a somber, melancholy mood or a jubilant, upbeat occasion.

Caraboom's final act closes with a massive amount of foam shooting out of cannons while everyone — audience included — hits the performance area to join the celebration. Perhaps this is the free-spirited, feel-good extravaganza we all need right about now.

Caraboom. 7 and 9 p.m. Through April 10, at Miami Dade College Wolfson Campus, 233 NE Fifth St., Miami; caraboomlive.com. Tickets cost $35 to $115.
KEEP MIAMI NEW TIMES FREE... Since we started Miami New Times, it has been defined as the free, independent voice of Miami, and we'd like to keep it that way. With local media under siege, it's more important than ever for us to rally support behind funding our local journalism. You can help by participating in our "I Support" program, allowing us to keep offering readers access to our incisive coverage of local news, food and culture with no paywalls.
Make a one-time donation today for as little as $1.
Carlos Omar Gardinet