Franky Cruz's Some Kind of Heron
Photo courtesy of Franky Cruz
Donna Marxer grew up in 1930s and '40s Miami, before invasive pythons and ravenous real estate developers encroached on the Everglade’s native land — a time when its vastness and rich ecology wasn't as imperiled as it is today.

As time went on, Marxer pursued a career as an artist and relocated to New York, but her concern for the Everglades remained. In 2001, a year after the Comprehensive Everglades Restoration Plan (CERP)went public, Marxer was inspired to contribute to conservation efforts the best way she knew how: through art. She would spend the rest of her life dedicated to her two largest passions, art and the Everglades.

When Marxer saw the news that congress was signing CERP, an ongoing major wetlands restoration project to restore and protect what is left of Florida’s “River of Grass,” she was hopeful.

Recalling her childhood memories of a less-endangered wetland, she realized art could be a tool to help people see the beauty of the land she revered. She wrote a letter to her congressperson proposing an artist residency program inside Everglades National Park as a way for artists to record and interpret the land and, through this intimate experience, become ambassadors for the Everglades.


The letter was quickly passed to Alan Scott, district interpreter at the time for Everglades National Park. Together Scott and Marxer created the Artists in Residence in Everglades (AIRIE) program.

Twenty years later, AIRIE is celebrating its commitment to conservation through art by exhibiting a survey of artworks created by AIRIE artists in Everglades National Park. Since its founding in 2001, AIRIE has brought more than 190 artists to the park for monthlong residencies in which they live and work within the largest subtropical wilderness in the United States. Opening on July 19, the show will feature work from Marxer, who died in 2018 at the age of 84, and other artists who became loving ambassadors of the Everglades through the program.

“It was passion work for her,” says Scott, current chief of resource education and interpretation. “People know about Marjory Stoneman Douglas and her support of the Everglades. Donna Marxer was the same. She basically decided to do something about the Everglades, and she did.”

By partnering with AIRIE, Everglades National Park has raised awareness about the threatened resource on a larger scale and to an audience that may otherwise not have any interest in wildlife.

“What goes on outside the boundaries of the park affects the wildlife, and the park itself is the downstream recipient of all the sins that are made by the people and the state of Florida,” Scott says. “AIRIE is a way for people who would never normally be involved in Everglades or Everglades restoration to be involved. So every one of them has become a speaker, a spokesperson, or an ambassador for the Everglades.”

The exhibit will feature photography, paintings, and video work made by fellows during or after their time in AIRIE.


Jose Elias, who was in residence in January 2016, focused his work on interspecies communication, traveling as far as Lake Okeechobee and through the backcountry to capture animal kingdom audio from the field. Five years later, through a process he describes as “osmosis,” he created the "Everglades Songbook Suite" in collaboration with Live Arts Miami and various musicians. 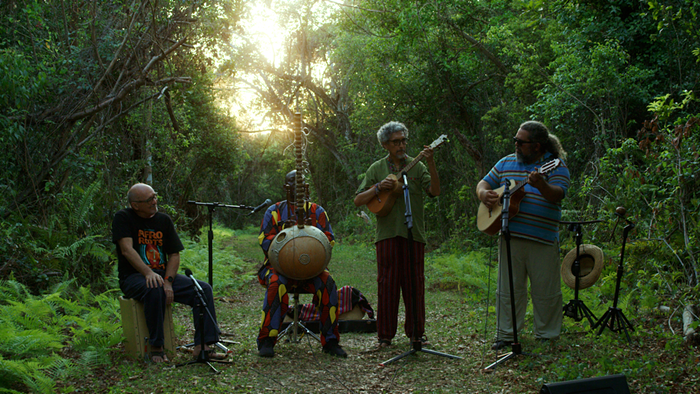 Still from "Everglades Songbook Suite"
Photo courtesy of Randy Valdez
The "Everglades Songbook Suite," which will be exhibited during the anniversary show, is a collection of improvised compositions and soundscapes that celebrates the sights and sounds of the Everglades by juxtaposing a variety of acoustic instruments with field recordings. The short film honors the Everglades’ natural flow, staging compositions from a sunrise peak on the Anhinga Trail to an intimate prayer song on the Mahogany Trail played by Seminole artist Samuel Tommie, with the ultimate goal to draw people into the majesty of the Glades.

“The Everglades is resilient, but it’s never going to be the same,” Elias says. “We are the stewards of the land. My hope is with this project moving forward is to make people be mindful of their footprint, regardless of where you live, whether it's Hialeah or Miami Lakes or Westchester — it all used to be swamp.”

One of the projects AIRIE began in 2015 was the purchase of promotional billboard space to highlight fellows' work. As a federal agency, the National Park Service cannot do any marketing of its own. While many other national parks receive state tourism money to market their parks, the State of Florida has other tourist destinations that have historically taken precedence in the marketing budget.

“Here we are one of the crown-jewel national parks, and the State of Florida doesn’t see us as being the main thing — not in the sense of marketing, at least,” Scott says. “AIRIE put the billboard up for people to encounter art related to the Everglades as they were driving down the Turnpike or 95, and it got a lot of reach.”

Franky Cruz’s photo series and performance, Some Kind of Heron, featured on an AIRIE billboard in 2015 and part of the anniversary show, presents the artist transformed into a heron deep in a cypress dome. During his 2015 residency, the local artist ingested information about the plume trade from the early 19th century that saw hunters nearly wiping out the population of native herons. Two weeks after his time at AIRIE, he decided to honor the bird and all it had endured by embodying the prized heron.

“Art in itself is a tool for communication, and maybe an object will touch someone in a way that someone preaching to them won’t, or an ad won't,” Cruz explains. “Something like that photo I did — it’s just like you were in that environment, it’s such a thing outside of what people do in their everyday lives it makes them curious about it.”

Cruz, who was raised in Hialeah, always felt innately connected to nature but never had direct access to it until he intentionally sought it out through AIRIE and the Everglades. During his stay, a park ranger would take him on off-trail tours, giving him a deeper admiration for the delicate cycles of the land and the way his work could leave a lasting impact. He experimented with natural pigments and learned to be more mindful of his footprint.

“I am nature,” he says. “For a long time, I was spray-painting on walls. I became aware of what I was doing. Am I just making more paintings and splashing noxious chemicals on things? Why can't I find another way that’s in keeping with what my footprint is going to be, what my impact is going to be in how the work is made.”

After 20 years and nearly 200 artists-in-residence, AIRIE will continue to highlight the state of the Everglades in the hopes of supporting the land’s natural cycles as Marxer and Scott always intended.

AIRIE 20th Anniversary Exhibition. On view through March 2022, at AIRIE Nest Gallery inside the Ernest F. Coe Visitors Center, 40001 State Hwy. 9336, Homestead; airie.org. Admission is free.
KEEP MIAMI NEW TIMES FREE... Since we started Miami New Times, it has been defined as the free, independent voice of Miami, and we'd like to keep it that way. With local media under siege, it's more important than ever for us to rally support behind funding our local journalism. You can help by participating in our "I Support" program, allowing us to keep offering readers access to our incisive coverage of local news, food and culture with no paywalls.
Make a one-time donation today for as little as $1.