Who needs snow when you have sand? Photo courtesy of the City of West Palm Beach

There will be no white Christmas in South Florida this year — there hasn't been snow recorded here since 1977. And that was more of a trace of snow than a winter wonderland. But just because the palm tree tops here never glisten and children never hear sleigh bells in the snow doesn't mean South Florida is devoid of the holiday spirit.

Still, South Florida has its own traditions for the holidays — from a 700-ton Christmas tree made of sand to a 12-mile holiday boat parade — that give Christmastime a unique vibe. Below, in chronological order, are the best of those sunny South Florida traditions and events to make your holidays merry and bright. 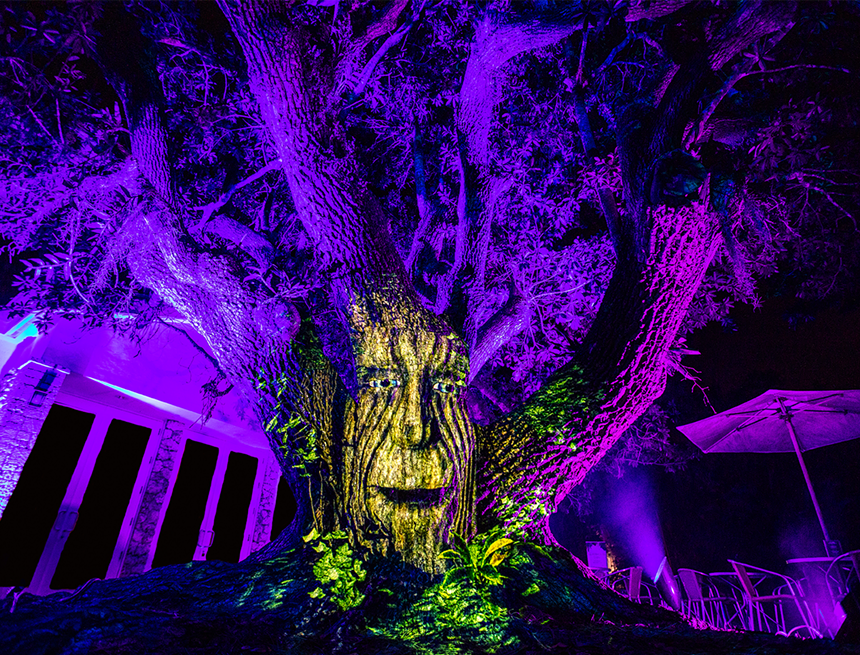 Archie the talking tree would like to have a word with you.
Photo by Sharon Sipple

Remember when Ye (FKA Kanye West) made headlines for talking to a tree (AKA Archie) in Miami? That convo took place at the NightGarden at Fairchild Tropical Botanic Garden. You too can get in your one-on-one time with Archie and experience an interactive light display — which includes a snowfall and tropical rainforest — unlike any other in South Florida. New this year: The FairyScope augmented reality app that allows you to find hidden fairies. 6 to 10 p.m. through January 2, 2022, at Fairchild Tropical Botanic Garden, 10901 Old Cutler Rd., Coral Gables; 305-667-1651; thenightgarden.com. Tickets cost $24 to $34.

The magical tunnel of lights, surfing Santa display, and Christmas music and reggaeton soundtrack await you at this most Miami of holiday traditions. Now located in Hialeah Park, after spending 37 years in Tropical Park, Santa's Enchanted Forest returns with many of the same carnival rides and greasy foods you know and love. Through Sunday, January 2, 2022, at Hialeah Park, 3100 E. Fourth Ave., Hialeah; 305-892-9997; santasenchantedforest.com. Tickets cost $39.25 for adults and $29.91 for seniors and children 3 to 8 years old.

The theme for this year's holiday décor at the Deering Estate: the Gilded Age.
Photo courtesy of Miami-Dade County

Charles Deering's old digs will once again turn back the clock for its annual holiday decorations. This year's theme? The Gilded Age. That's the term used to describe the era between the late 1800s and early 1900s known for its elegance and excess, not to mention greed. It's also the era that gave us the classic ballet The Nutcracker, which will be well represented in Deering Estate's Stone House. 10 a.m. to 4 p.m. Friday, November 26, through Thursday, January 6, 2022, at the Deering Estate, 16701 SW 72nd Ave., Miami; 305-235-1668; deeringestate.org. Tickets cost $15 for adults and $7 for children 4 to 14 years old via miamidadeparks.com.

Here's one post office you'll look forward to visiting this holiday season. Santa's post office — located inside Santa's Command Centre in Brickell City Centre  — invites guests to write or print out their letters to Santa and place them in the designated mailbox. Or they can speak directly with the jolly fat man himself. Santa will appear at this eye-catching pop-up on select days for free photos ops. Friday, November 26 through Friday, December 24 at Brickell City Centre, 701 S. Miami Ave., Miami; 305-350-9922; brickellcitycentre.com. Admission is free.

Believe it or not, there is sledding in South Florida. You can experience it for yourself at the 59th-annual Christmas on Las Olas, which again features a makeshift hill consisting of man-made snow. And if whooshing down a hill on a plastic saucer isn't your thing, take in the local school and church choirs performing holiday tunes on three stages. 5 to 10 p.m. Tuesday, November 30, at 900 E. Las Olas Blvd., Fort Lauderdale; christmasonlasolas.com. Admission is free.

One of the tallest Christmas trees in Florida can be found in Delray Beach.
Photo by Emiliano Brooks

The 100-foot Christmas tree is located in Delray Beach's Holiday Village is one of the tallest Christmas trees in the state. Is it real? No, but neither is the Santa at your local mall. Other Holiday Village activities include a carousel, skating rink, photos with Santa, and holiday movie nights. Tuesday, November 30, through Sunday, January 2, 2022, at Old School Square, 51 N. Swinton Ave., Delray Beach; 561-243-7250; 100footchristmastree.com. Admission is free; the carousel and skating rink are $3 each. Who needs a balsam fir or white spruce when you can have a Christmas tree made out of sand? "Sandi" — located at West Palm Beach's Holiday in Paradise — comes in at 35 feet tall and a whopping 700 tons. A music and light show accompanies Sandi every night on the quarter-hour. Country singer Brooke Eden is scheduled to perform at the tree lighting Thursday, December 2, and Santa is scheduled to make a few appearances himself. He'll be inside a snow globe during photo ops for social distancing purposes. 6 to 10 p.m. Thursday, December 2, to Tuesday, December 31 at 100 N. Clematis St., West Palm Beach; 561-822-1515; wpb.org. Admission is free; mini-golf is $3.

There are plenty of light displays around Miami come Christmas time. Hell, there's probably a gaudy one or two in your neighborhood. But few are as impressive as the ones you'll find strolling around Nights of Lights at Pinecrest Gardens. Besides thousands of lights, the annual event also includes a maze made up of lit fir trees and, on certain nights, holiday concerts in the Banyan Bowl. 6 to 9 p.m. Friday, December 10, through Sunday, January 2, 2022, at Pinecrest Gardens, 11000 Red Rd., Pinecrest; 305-669-6990; pinecrestgardens.org. Tickets are $20 for adults and $15 for children under 18 via eventbrite.com.

Miami City Ballet is making it easier to travel to the Land of Snow this holiday season. The ballet ensemble is taking its production of George Balanchine's The Nutcracker — we're talking over a hundred dancers and a live orchestra — to three venues across South Florida. Some might remember that last year's production took place outdoors in Doral owing to COVID. Friday, December 10, through Sunday, December 12, at the Broward Center for the Performing Arts, 201 SW Fifth Ave., Fort Lauderdale; Thursday, December 16, through Sunday, December 26, at the Adrienne Arsht Center, 1300 Biscayne Blvd., Miami; and Wednesday, December 29, through Thursday, December 30, at the Kravis Center, 701 Okeechobee Blvd., West Palm Beach; miamicityballet.org. Tickets cost $34 to $109.

There might not be a bigger holiday event in the area than this 12-mile boat parade in South Florida, which is said to draw around a million spectators each year. The self-proclaimed "Greatest Show on H2O" features private boats, showboats, and mega yachts decorated with lights and Christmas decor. Some of the more prime viewing points are available via tickets or hotel and restaurant packages, but you can still score a good spot for free if you're willing to show up early.  6:30 to 8:30 p.m. Saturday, December 11, from the New River to the Intracoastal Waterway in Fort Lauderdale and Lake Santa Barbara in Pompano Beach; 954-767-0686; winterfestparade.com. Admission is free, but seats in the grandstand viewing area are $25 for adults and $15 for children 10 years or younger.

Hundreds of Santas will be hauling ass on the streets of South Florida as part of this holiday-themed run, which takes place nationally in multiple cities, including Fort Lauderdale and Delray Beach. The race provides runners with a Santa suit and hat rather than a standard race shirt, a white beard — because why not? — and bells to tie onto their running shoes for that festive jingle effect. The little ones are invited to participate as well in the Kids Elf Dash. 8 a.m. Saturday, December 11, at Miami Lakes Picnic Park West, 15151 NW 82nd Ave., Miami Lakes; and 6 p.m. Saturday, December 18, at Las Olas Oceanside Park, 3000 E Las Olas Blvd., Fort Lauderdale; jinglebelljog.net. Registration is $45 for the 5K and $20 for the Kids Elf Dash via runsignup.com.

You could say this is the rock band's busy season. Trans-Siberian Orchestra has been delivering its brand of Christmas spirit — a mix of holiday classics with guitar riffs and leather — for over two decades. The faces have changed, but the intensity remains the same. This year's tour focuses on the band's 1996 Christmas Eve and Other Stories album that started it all, with a few other hits from their catalog mixed in. 8 p.m. Friday, December 17, at FLA Live Arena, 1 Panther Pkwy., Sunrise; 954-835-7000; flalivearena.com. Tickets cost $35.25 to $85.25 via ticketmaster.com.

The oldest home in Fort Lauderdale invites you to experience what Christmas was like long before The Elf on the Shelf and ugly Christmas sweater parties. Enjoy Victorian-style holiday decor and tour guides in old-fashioned Christmas attire for that old-timey feel. 7 p.m. Saturday, December 18 through Thursday, December 23, at Stranahan House Museum, 335 SE Sixth Ave., Fort Lauderdale; 954-524-4736; stranahanhouse.org. Tickets cost $30.
KEEP MIAMI NEW TIMES FREE... Since we started Miami New Times, it has been defined as the free, independent voice of Miami, and we'd like to keep it that way. With local media under siege, it's more important than ever for us to rally support behind funding our local journalism. You can help by participating in our "I Support" program, allowing us to keep offering readers access to our incisive coverage of local news, food and culture with no paywalls.
Make a one-time donation today for as little as $1.