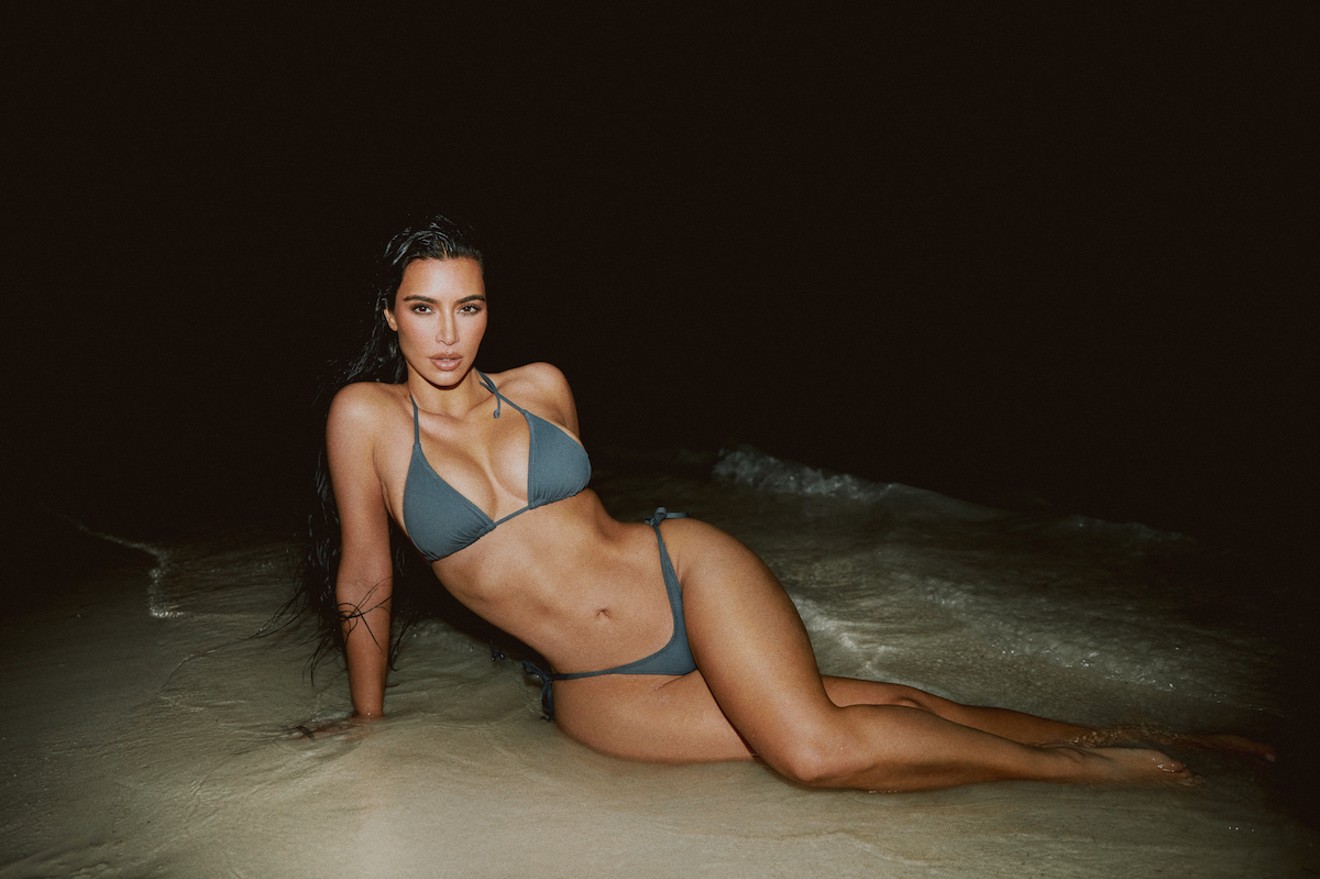 Skims Swims collection consists of 19 silhouettes in seven colorways. Photo courtesy of Skims
Like a true Miamian amid spring break season, I had no intention of leaving my house — that is until I heard Kim Kardashian was taking her talents to Design District. Skims, Kim's apparel brand, was launching its first-ever swimwear line, Swim, and announced a pop-up event in the tony neighborhood.

And in other true Miami fashion, I attended and waited three hours in line to get my Skims Swim.

So on Saturday, I arrived at the Design District at 11:30 a.m., underestimating the crowd because Skims hadn't announced the pop-up until the last minute. I reached the event's trailer in what seemed like a life-size, chromed-out version of the inflatable Skims ice cooler with a splash of water dropping on the side like a waterfall. I made a few rounds of the block looking for parking, passing the line every time and finding it shorter, naïvely assuming it was going by fast.

The long straight line eventually repositioned itself to a curved line, with Skims fans standing over a cornered yard landscaped with small white pebbles and a sign that read "Remain Pawsitive." We were waiting at a closed dog park but had two food truck stands opened to serve, including Yoso Bubble Tea.

The line only seemed to move every 20 minutes, and only three trees, spaced about 12-feet apart, provided shade. At times, fans remained under the shade even when the line moved, the better to avoid the blazing sun. The exuberant yellow wall behind the line had Skims campaign posters plastered over it and above it read "Divine Design," a phrase Vous Church dedicated to the late fashion designer Virgil Abloh. Though the line wasn't moving, there were Instagrammable moments even before we reached the actual pop-up. 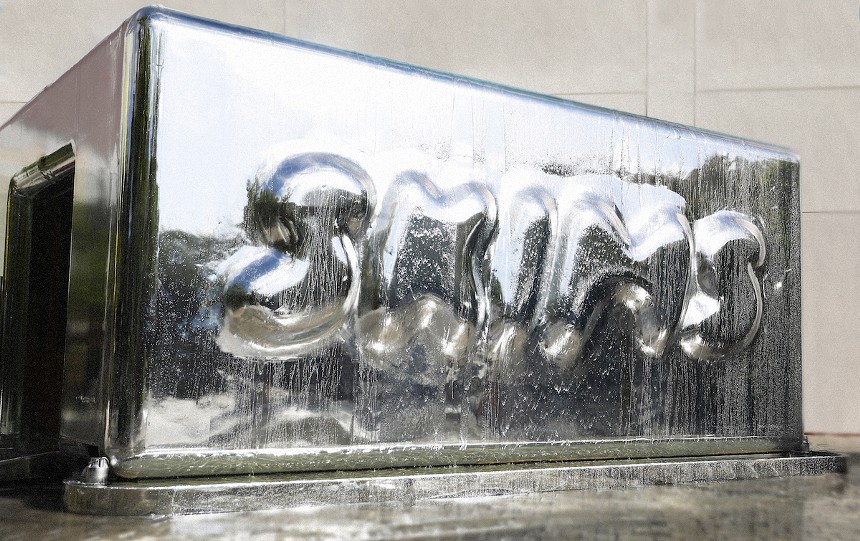 The Skims Swim trailer popped up in the Design District.
Photo courtesy of Skims
It was 1:15 p.m. I was still standing near the dog park sign. I'd spent time scrolling through Skims' Instagram, conflicted about which set to buy. The longer I waited, the more I debated which suit to get. I stepped out of line for a moment to buy a water bottle at one of the food trucks, only to watch as Kim's team brought out Skims-themed water bottles for everyone in line.

As the line moved, random tourists walking along NE 40th Street stopped and asked us what we were in line for. A woman who stopped to ask later shouted at her group, who'd kept walking, "¡Es para esta mierda!" ("It's for this shit!") signaling at the poster which had Kim photographed in her almond-colored bathing suit set.

A man also stopped by only to immediately run off the second someone told him, "We're waiting in line for a bathing suit." Someone in line commented that the man's watch was worth more than his own home. Making me dwell on how successful people are probably doing thriving and prosperous things on a Saturday morning, yet here I was. But there he was, too. We were in the same place doing different things — kind of like the concept behind the versatile swimsuit line itself.

The launch consists of 19 silhouettes in seven colorways, including a minimalistic periwinkle color and an electric cobalt blue. There are cover-ups, bodysuits with intricate designs (that would result in an interesting tan), and long-sleeve tops that one could wear out and about. It's a universal line that gives consumers the option of coming up with their own set — say, pairing a bikini top with cheeky bottoms or mid-waist shorts. Whatever one chooses, the pieces have one thing in common: They're created to make one feel empowered, secure, and exquisite. A long-winded description aligns skillfully with Kim K., illustrating how much of herself is poured into her brand. 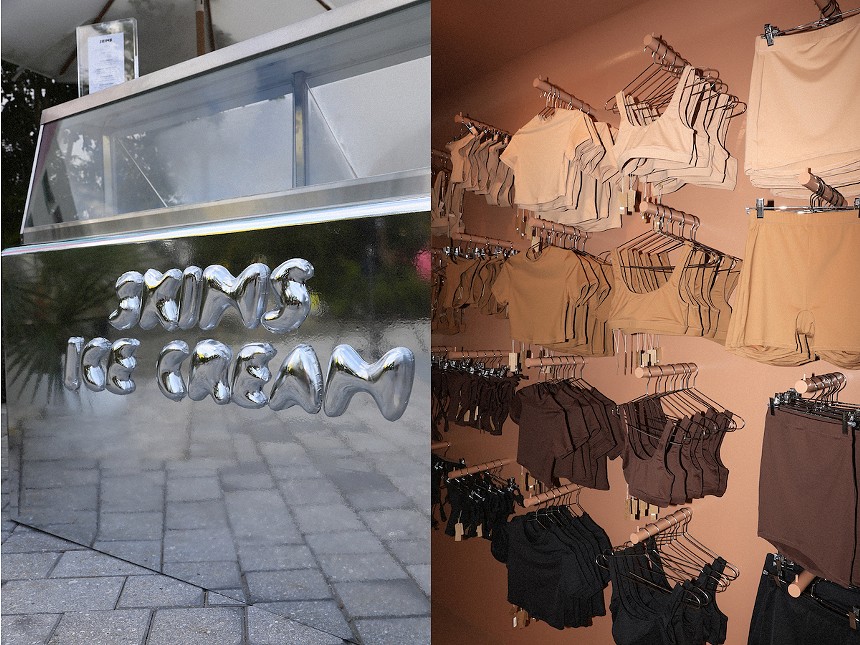 There was plenty to look at during the Skims pop-up.
Photo courtesy of Skims
At around 2 p.m., the line moved quickly, and I found myself standing on the sidewalk with newcomers. My fear at this point wasn't Skims running out of inventory but the possibility of appearing on @onlyindade's Instagram. Traffic began to mass as the neighborhood became more crowded and Miami drivers (yes, Miami drivers) stopped to record the queue.

The time hit 2:20 p.m. I was still in the same spot. I told myself that maybe by 2:45 p.m. I'd be inside, shopping away. More Skims water bottles were distributed, this time by a model wearing head-to-toe Skims and Yeezy slides. I began to see customers with Skims ice cream, some walking out wearing their purchases.

The line moved more quickly as we got closer — only to discover they were letting only two to three people enter at a time. There were about five sales associates, attending to each customer individually. As at many of the designer stores at the Design District, this was exceptional assistance. But slow.

It was 3 p.m., and ready to enter the Skims trailer, having chosen what suit I wanted. Walking into the tiny dome, a breeze of inspiration rushed through as I gazed at each colorway, hung out in a color-coordinated manner. Choosing my bodysuit was the easiest once I saw it in person. The rich colors are more resonant, in person and the texture of the fabrics — it's as if you knew off the bat which one would fit correctly because of the tailoring. Seeing the pieces in person made it easier to shop for without needing to try them on. I concluded the wait by purchasing the Swim scoop-neck one-piece.

Each customer was limited to four pieces. After my purchase, the associates advised me to linger and enjoy some ice cream while I waited to hear my name called as my order emerged in a metallic Skims bag. The vegan ice cream flavors matched the colors of the suits, from sea salt caramel to a simple milk vanilla flavor. Another true Kardashian touch.

The ultimate irony was the rose-colored sunburn I achieved waiting in line for a bathing suit.
KEEP MIAMI NEW TIMES FREE... Since we started Miami New Times, it has been defined as the free, independent voice of Miami, and we'd like to keep it that way. With local media under siege, it's more important than ever for us to rally support behind funding our local journalism. You can help by participating in our "I Support" program, allowing us to keep offering readers access to our incisive coverage of local news, food and culture with no paywalls.
Make a one-time donation today for as little as $1.