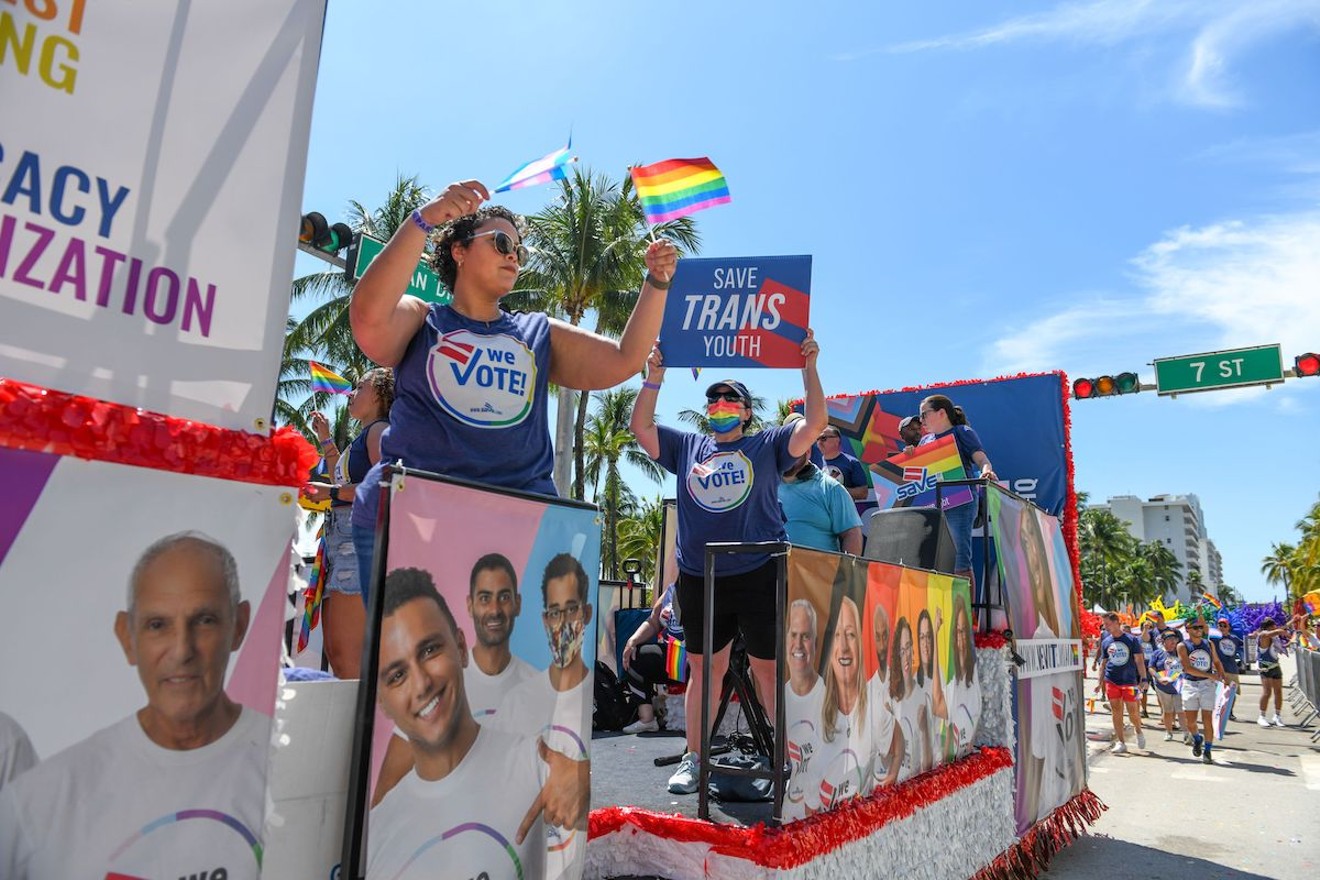 There are plenty of LGBTQ+ charities to keep in mind during Pride and beyond. Photo courtesy of SAVE
With the party atmosphere surrounding most Pride events, it's easy to forget the holiday is observed thanks to a riot. In 1968, tired of the police raids at the Stonewall Inn in Greenwich Village in New York City, gay, lesbian, bisexual, and transgender people protested, making way for the modern-day Pride parades.

That's why partying shouldn't be your only goal during Miami Beach Pride. It's important to recognize that a lot of work remains to be done. Many organizations make it their mission to help the LGBTQ+ community 365 days a year.

If you really want to show your support for the community, educate yourself about the nonprofits doing the hard work. If you're ready to take the extra step, consider donating money or your time.

The alphabetical list below is is by no means a comprehensive list of all the LGBTQ+ charities in South Florida, but it's a good place to start.

ariannas-center.org
Working to engage, empower, and lift South Florida's trans community, Arianna's Center helps one of the most marginalized communities out there. With an emphasis on the trans-Latinx community, the organization provides services like education, employment, and healthcare while also working on policy and advocacy. In addition, Arianna's Center helps undocumented immigrants, people living with HIV/AIDS, and people who have experienced incarceration.

pridelines.org
Since 1982, Pridelines has worked to educate and empower LGBTQ+ youth and the community. The organization hosts everything from social groups to health services for those in need. Its groups are essential, providing a safe space for dialogue — an issue of increased urgency in public schools, thanks to Gov. Ron DeSantis and the Republican-controlled state legislature.

prismfl.org
South Florida-based Prism provides LGBTQ+ youth (with an emphasis on people of color) with resources to foster the next generation of entrepreneurs, artists, politicians, and more. Prism's online resources supply context on sexual health, LGBTQ+ history, and queer POC. In the wake of the recent passage of Florida's "Don't Say Gay" bill, Prism has promised to step up its efforts to foster understanding of the LGBTQ+ experience.

save.lgbt
Since 1993, SAVE has been fighting for equal rights for LGBTQ+ individuals in South Florida. Along with its education arm, the SAVE Foundation, the group helps to raise awareness about the rights and protections available to the community. Its SAVE Action political action committee endorses local and statewide candidates who align with the organization's goals and educates candidates about issues that affect the LGBTQ+ community.

stonewall-museum.org
Preserving the past is an often thankless endeavor, and for almost 50 years, the Stonewall National Museum and Archives has been on a mission to safeguard LGBTQ+ history. Founded in 1972 by Mark Silver, the museum presents a year-round schedule of exhibitions and public programs along with film screenings, panel discussions, and events. Its Stonewall National Education Project hosts an annual symposium that invites K-12 educators to learn about a range of LGBTQ+ topics. (This year's symposium takes place from April 14-16.)

unitycoalition.org
Unity Coalition fosters Latinx and indigenous LGBTQ+ leadership and pride. Its October festival, Celebrate Orgullo, focuses on Hispanic and indigenous contributions to the LGBTQ+ community through art, music, dance, and theater. the group also hosts groups like Caōba, which provides a safe space for queer men of color, and the Micro Giving incubator fund, which bankrolls startups and backs educational development.

yesinstitute.org
YES Institute's mission is to prevent suicide and foster the healthy development of youth through communication and education on gender and orientation. The organization provides courses on a range of topics, including bullying, playing with gender, and leadership. It also offers resources to businesses and organizations looking to foster diversity and inclusion. Services are available to parents and families in English and Spanish, along with gender- and orientation-affirming medical and mental-health referrals.
KEEP MIAMI NEW TIMES FREE... Since we started Miami New Times, it has been defined as the free, independent voice of Miami, and we'd like to keep it that way. With local media under siege, it's more important than ever for us to rally support behind funding our local journalism. You can help by participating in our "I Support" program, allowing us to keep offering readers access to our incisive coverage of local news, food and culture with no paywalls.
Make a one-time donation today for as little as $1.