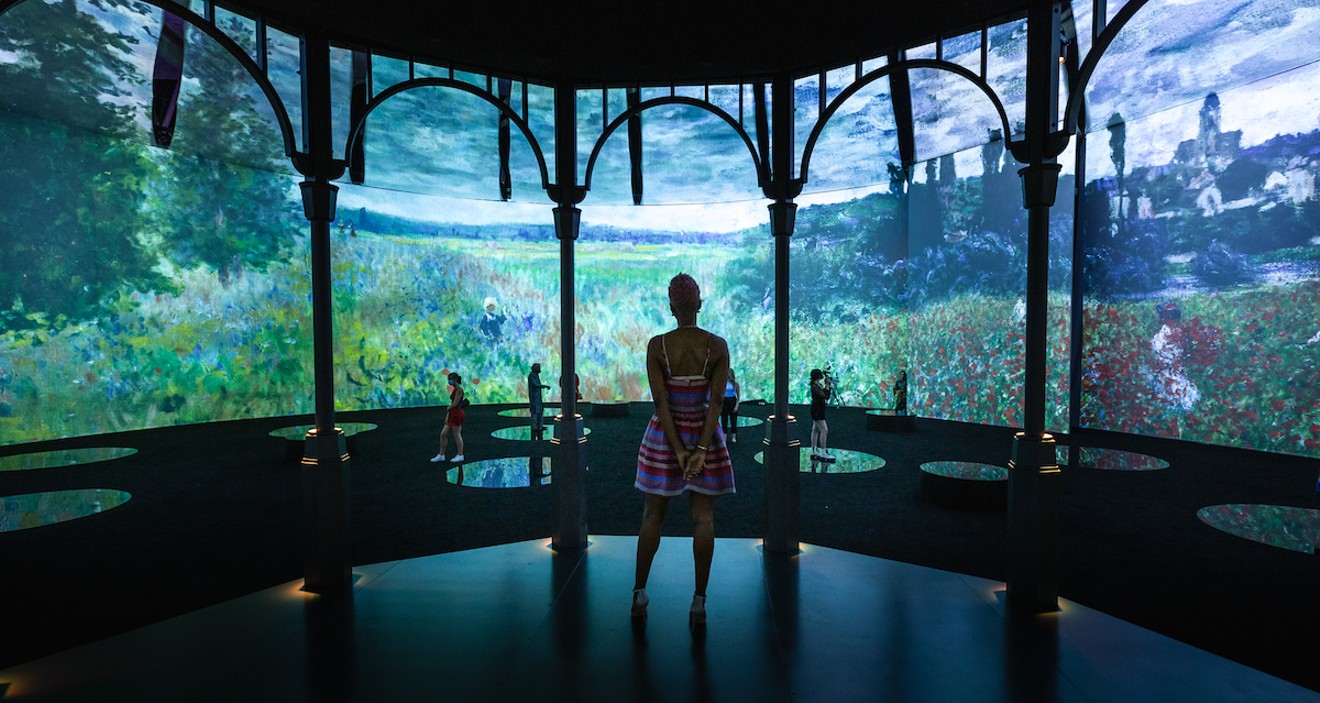 Photo courtesy of Beyond Exhibitons
Following the success of last year's "Beyond Van Gogh" exhibition at Ice Palace Studios, its sequel, "Beyond Monet," made its debut last week to showcase the work of another renowned impressionist painter, Claude Monet.

Like its predecessor, "Beyond Monet" touts itself as an immersive experience that combines the use of art, music, and projections to bring impressionist art to life. The new exhibition showcases over 400 of Monet's works, including acclaimed paintings such as Impression, Sunrise and works from the Water Lilies series.

The show was created by French-Canadian creative director Mathieu St-Arnaud and his team at Montreal's Normal Studio. Together they worked to re-create Monet's vision as a stimulating experience guests can leap into.

Upon entering, visitors land in a gardenlike room, surrounded by reproductions of the French painter's work. The walls showcase his paintings, particularly those that follow a green and pink color scheme, containing nature, such as trees, flowers, and gardens.

Photo courtesy of Beyond Exhibitons
Similar to the Van Gogh exhibit, the room contains explainers about Monet's work that outline key themes found in his pieces. However, unlike "Beyond Van Gogh," which superimposed the text directly onto the works, "Beyond Monet" sees the terminology placed in front of the art, allowing the viewer to see the imagery unobstructed.

Monet is perhaps best known for his paintings of water lilies, which were inspired by his gardens in Giverny. His 1899 painting, Bridge over a Pond of Water Lilies, consists of not only lilies floating on a pond but also showcases a Japanese bridge. At Ice Place, Normal has brought the painting to life, rec-reating real-life Japanese bridges for attendees to walk across. Each bridge sits inside its own tentlike structure filled with the reproductions of Monet's work.

After visitors are done immersing themselves in the art — or taking selfies with the portraits — they move on to the room that is perhaps the reason shows like "Beyond Monet" exist. Similar to the "Beyond Van Gogh" show, Monet's work is projected in a large space that fills the entire room. The visual stimuli are paired with music to elevate the sense of immersion.

Photo courtesy of Beyond Exhibitions
Here, the mirrors set the show apart from its Van Gogh predecessor, as does the large gazebo, which has been placed at the center of the space, giving visitors the sense they're sitting in the middle of a garden. Add to that the elevated seating that's coated with a reflective surface, and the overall impression is of being surrounded by a dark body of water with lilies reflecting the projected images.

Instead of taking on the role of casual observer, the attendee becomes a part of the work. As colors float and change, sometimes accompanied by words and quotes, the viewer is no longer a physical differentiator but rather a key contributor to the paintings' enduring power.

"Beyond Monet." On view through March 27, at Ice Palace Studios, 1400 N. Miami Ave., Miami; miamimonet.com. Tickets cost $23.99 to $93.99.
KEEP MIAMI NEW TIMES FREE... Since we started Miami New Times, it has been defined as the free, independent voice of Miami, and we'd like to keep it that way. With local media under siege, it's more important than ever for us to rally support behind funding our local journalism. You can help by participating in our "I Support" program, allowing us to keep offering readers access to our incisive coverage of local news, food and culture with no paywalls.
Make a one-time donation today for as little as $1.