Alvis Echevarría of Hialeah, a subject of Lasalle-Morillo's Retiro. Natalia Lasalle-Morillo
Endless interviews with women on the red carpet in glittering gowns. Flawless models selling the latest cosmetics in glossy women’s magazines. The new army of celebrity girls morphing into women in front of our very eyes. Young, attractive women are everywhere you look. What's rarer, at least in entertainment and media, are women openly accepting or coping with the inevitable aging process. Aging is increasingly hidden in real life too, especially in Miami, where it's masked with white lies, makeup, and cosmetic procedures.

Still, getting older is a universal experience. So where are our stories about life’s natural process and its effects on bodies and minds?

Interdisciplinary artist Natalia Lasalle-Morillo, age 26, is directing a hybrid theater and film piece at Miami Theater Center titled Retiro. The work strives to reveal and destigmatize attitudes about aging in women. The show, whose title translates to “retirement,” weaves together anecdotes of women in their 60s and older through physical realizations of interviews, spoken-word storytelling, movement, and improvisation.

“I’ve always gotten along with older women,” Lasalle-Morillo says. "They have a sensibility towards the telling of their stories that I wanted to capture. Aging is inevitable in our lives. I gravitate towards what is universal. There are so many divisions between people, but we will age, and we will all die. As as it sounds, it’s real.” 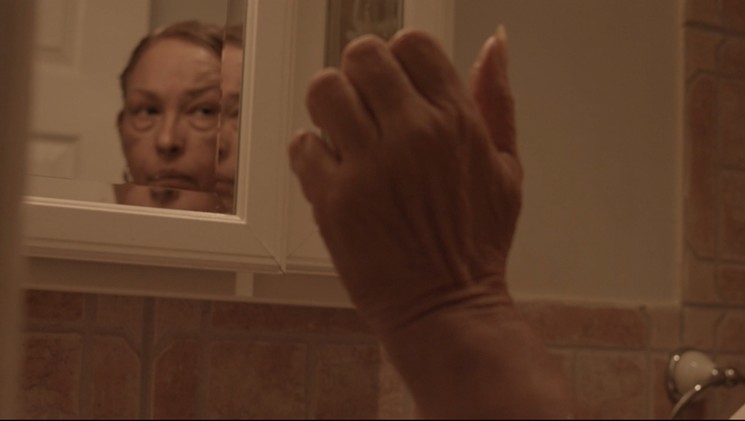 Gloria Morillo of Bayamón, Puerto Rico, in Retiro.
Natalia Morillo-Lasalle
The project began about two years when Lasalle-Morillo returned to her home in Puerto Rico to interview her mother after her grandmother passed away. “I interviewed her about grief and death. She was 63 at the time. We talked about her process of aging and how her body was transforming,” she says. “What were her fears? What does it feel [like] to live when you know that death is an imminent thing?”

The process continued when Lasalle-Morillo came to Miami and then went to Quebec. She found women of the same age as her mother and asked them the same questions. She worked with them to re-create memories in their lives, either from their past or and turned them into video vignettes.

The stage show Retiro emerged from this process of filmmaking. Lasalle-Morillo will be present at the show as a bystander, video operator, and intervener. “I proposed a theater piece as I was thinking about my role. As much I tried to be distant from these stories, I am very much in these stories too... These stories all have parallels and intersect, and my journey has brought them together. It’s alluding to the process of making the documentary.”

Old age seems far off for Lasalle-Morillo, but it remains a crucial subject of interest. “I am fascinated with what older women have to say. They have experience, and their bodies have experience. In general, older people are not represented. I am thinking of aging in this different way,” she says. “I am very conscious of the fact that my body is going to change and transform. As much as you take care of yourself, you have no control over where your body is going to go.”

Through this project, Lasalle-Morillo has created a diverse depiction of womanhood. She has interviewed women of many races in Puerto Rico, Miami, and Quebec. She continues to expand her project and hopes to include the voices of transgender women.

She says the show is less about entertainment and more about observing a process: the process of documentary filmmaking, storytelling, and aging.

“The message [of the work] is how to accept the course of life and uncontrollable things in life, how to show different ways of accepting the natural course of existence but also just trying to make people empathize with different points of view.”