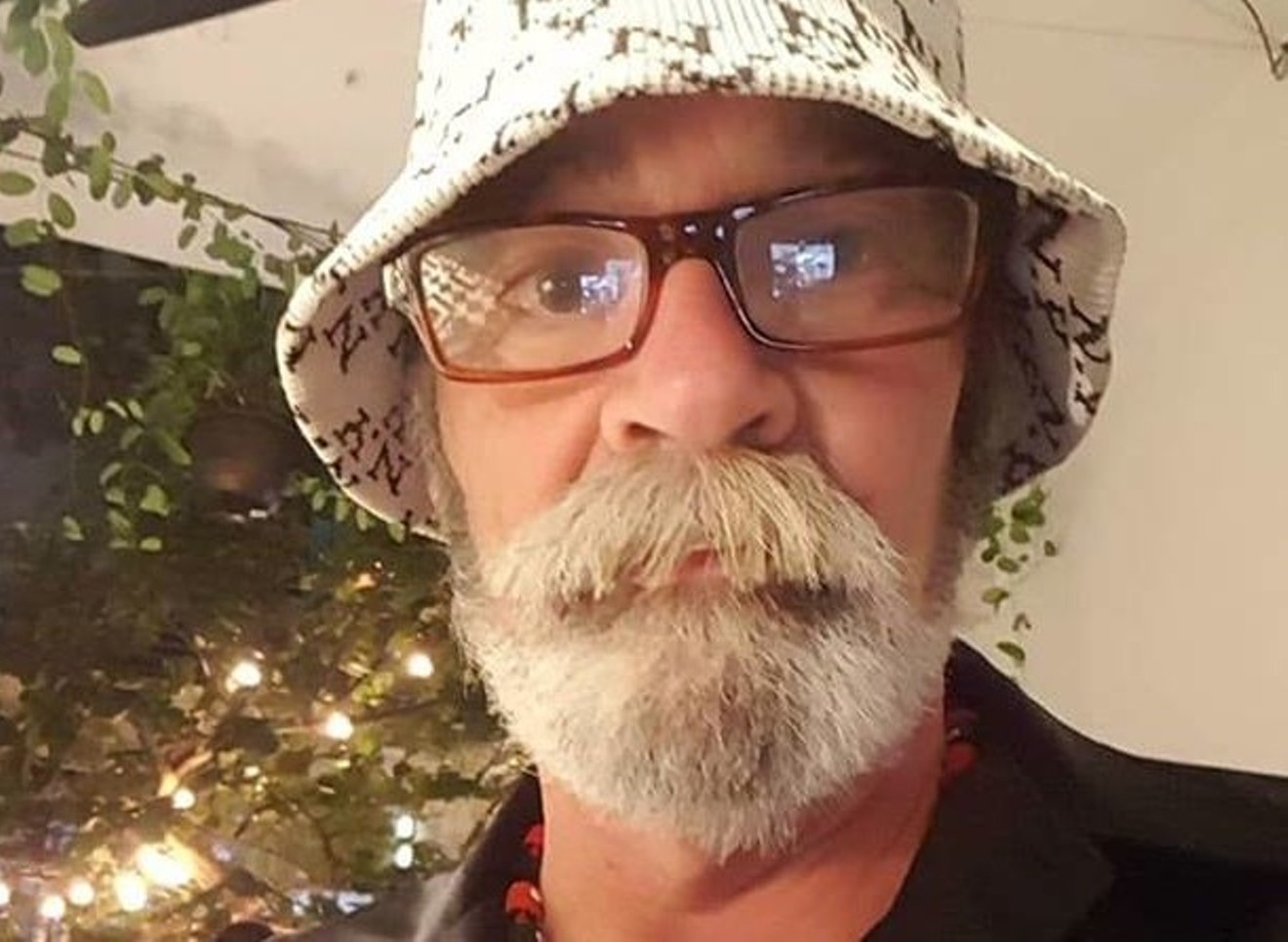 Former New Times art critic Carlos Suarez de Jesus, 1960–2022 New Times file photo courtesy of Carlos Suarez de Jesus
This headline should read: "The Crazy, Wonderful Art Life of Miami, as Told and Lived by Carlos Suarez de Jesus." My colleague and former editor at New Times Chuck Strouse has already written an eloquent and heartfelt obituary about Carlos, who left this world far too young on February 3. Chuck described a Miami renaissance man, an art critic who helped shape the Miami arts landscape, brilliant and Cuban-American to the core. All true, and it's hard to add much to that, but I will.

I first moved to Miami in 1999 to become associate editor for New Times overseeing cultural arts, just as Elian Gonzalez was being saved by dolphins (or inner tubes) and setting off an intense and emotional conflict among families, local and national government, and countries. It revealed a unique and complicated Miami to me, just as I was exploring a burgeoning and also unique arts scene bubbling up in Wynwood and Little Havana. It was an explosive time.

That's when Carlos Suarez entered my world — someone who would weave a form of political and cultural commentary into his own work and writings. And into his vibrant stories, which often were based on real escapades — in politics, in relationships, in the art world, in 1980s Cocaine Cowboys Miami. Looking back, it was Carlos who helped me see the funky, the dirty, the comical, the passionate layer that undergirded so much life here.

Back to the turn of the 21st Century, Little Havana, when I encountered Carlos and his then-wife Vivian Marthell, at their alternative art space off Calle Ocho on SW Sixth Street, called Lab6. There was a performance-art piece in the front window, complemented by more unscripted performance on the street courtesy of the neighborhood — such as a slow-moving rickety bike balancing six people on it, and rumba drum beats. The gathering crowd was as eclectic as the surroundings. This little section of street also included musician and artist Adalberto Delgado's 6g music studio, artists Carlos Alves and JC Carroll's studio, and Susan Caraballo's performing space PS 742.

It was raw, jumping and cozy at the same time, a time before Art Basel, Wynwood Walls, gleaming museums, overhyped art. Carlos would describe to me — no, spin a yarn about — some of the visitors and the art, with a telltale raspy chuckle and appreciation for the odd and the wonderful. He would sprinkle these with tidbits about Santería rituals and orishas, recollections of his days as a speechwriter for Miami's mayors or of being a kid in small-town Missouri, and always a loving mention of his own family.

But I'll let others offer their own memories of this formative period in contemporary Miami history, with Carlos as the linchpin.

Vivian Marthell, now co-director of O Cinema, recalls those early days. After opening a Champagne bottle and smashing his ceiling tile with the cork during one of their first meetings, she returned to his place with a single, new tile wrapped with a big red bow. The two artists married three whirlwind months later.

"We were inseparable! We riffed off of each other's energy and creativity and that's when we started working on...creating an organic diaspora in a mechanistic world." They decided they wanted an experimental live/work space and opened Lab6, where that street would "come together for events like Cafe Neuralgia, and the annual Babalú-Ayé [the Santería orisha of healing] celebration. It was during this time that Carlos, Susan, and I entered into a polyamorous relationship and moved into the large palacial studio above our Sixth street location [now Brigid Baker's dance studio]." One of the wood block paintings Carlos Suarez de Jesus made for friends of the PS 742 performance space (click image for full-size version)
Photo courtesy of Susan Caraballo
Lab6 would move upstairs and PS 742 opened on the ground level, both exhibiting local and national performance and visual arts that pushed all kinds of boundaries. Both were closed by 2005, and the instigators moved their separate ways.

That was, Vivian says, an "over-the-top, juicy, creative time, and Carlos Suarez de Jesus was at the epicenter."

Susan Caraballo, now a curator and resident artist at Deering Estate and MDC Live Arts, also recalls an edgy, creative spirit that Miami exuded in those days, where, she says, "Carlos was a force of nature." It was a very special time, she says, existing "at the cusp of Art Basel Miami Beach's arrival to South Florida. I remember us putting together elaborate press kits for shows, talking for hours, endless nights dreaming up projects, and so many other memories." Carlos mixed his love for art with his love for presenting, both visually and verbally. "When we closed PS 742, he made these wood blocks [paintings] as giveaways for some of the people that helped shape the space."

Gustavo Matamoros, who among other things has produced the Subtropics experimental sound festival for decades, tripped across Carlos around the same time. He remembers meeting a truly creative mind and big spirit. "I was running iSAW — a public-access project for artists wanting to work with sound and other media — and at some point, Carlos came in with his collaborator Jasmin [Kastel] to work on an alphabet soup piece that forever blew my mind."

More recently, he and Carlos "discussed ideas for collaborating around his 'Petunia: The Canine Art Critic' project. When I told him I was working with ultrasonic audio and suggested exploring the idea of The Dog Whistle, he really got excited — in more ways than one. He had a keen sense of humor."

Finally, remembers Matamoros, Carlos was full of surprises. "Yes, he was. Full of spectacular and useful surprises. And he was generous at heart."

After Lab6, Carlos landed for a time in Detroit and continued to make art and began writing art criticism for New Times. Former New Times writer and music editor Celeste Landeros — now a professor at Barry University — loved Carlos the raconteur maybe the most. "No one had more stories and no one was a better storyteller than Carlos," she writes. "After listening to tales about...that time in Detroit [when] a would-be burglar beat him up because all he had to steal was books, I hired him to write his first articles for the short-lived Category305.com — from there he moved on to write amazing pieces for Miami New Times and more. I will miss seeing him around town but will never forget his stories."

Small stories endeared him to former New Times theater critic Mia Leonin, now an associate professor at the University of Miami. Carlos was one of the very few Cuban-Americans who grew up in rural Missouri, as was Mia. He came from Sedalia in Central Missouri, "a tiny Podunk town 30 miles from Marshall, my tiny town. He was the only person I've ever met in Miami who knew where Marshall was!"

Combined, old Cuban tales, Sedalia, Detroit, and most of all an unrelentingly wild, fertile Miami made for rich fodder for the stories I recall. Along with the laugh, the outsized mustache, the underlying gentleness, and the eyes that were exclaiming, "You're going to be amazed by this."

Yes I was, and still am.

Carlos would seek out the unusual and the strange, the outsider and the overly privileged for subjects of his Art Brute column and criticism, as Miami-as-art-hub started to catch on internationally. For me, it was the outsider that jumped out: the introduction and controversies of street artist AholSniffsGlue; the interview with the artist despised for smashing Ai Weiwei's ceramic vase at PAMM; the pig wrestling of the performance artist Miru Kim, who rolled around naked in mud with swine.

He gave us insight into the rise of Wynwood and its Second Saturdays, and the hyperactive growth of Art Basel-turned-Art Week (both the exciting and ugly facets); the opening and closing of established and alt galleries; the flight of popular local artists. He continued to create his own art while occasionally showing others in pop-ups, until a stroke laid him low in 2016, and he struggled to gain back his health.

But his personal adventures in art, in the art world, in sundry jobs and locations, all made him a unique Miami presence with a unique voice, a shining light to many, whose flame won't be extinguished by death. As Matamoros put it, "Carlos, if you're listening, be well. You will be remembered."

There will be a Celebration of Life “Carlos-style” at O Cinema, Sunday, March 6 (his birthday), from 1 to 5 p.m., with an open mic, art installation, and music. And of course, pets are welcome.

Anne Tschida is a writer and editor who has contributed local cultural arts stories to the Miami Herald, New Times, and Biscayne Times, among other publications.
KEEP MIAMI NEW TIMES FREE... Since we started Miami New Times, it has been defined as the free, independent voice of Miami, and we'd like to keep it that way. With local media under siege, it's more important than ever for us to rally support behind funding our local journalism. You can help by participating in our "I Support" program, allowing us to keep offering readers access to our incisive coverage of local news, food and culture with no paywalls.
Make a one-time donation today for as little as $1.
Anne Tschida