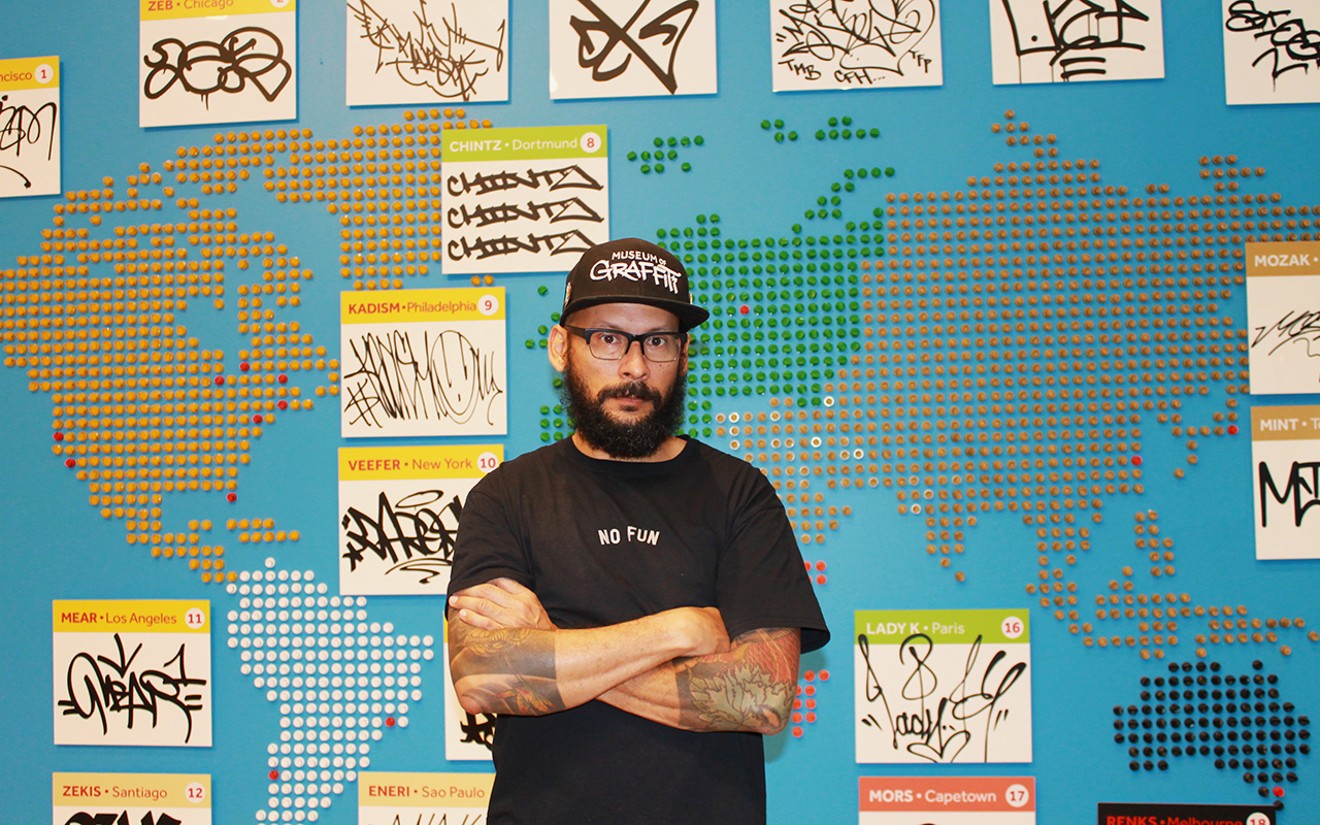 Observe visitors at the Wynwood Walls on any given day, and this is the pattern you'll notice almost all of them fall into. The Walls are to Miami what the Hollywood Walk of Fame is to L.A.: iconic to the city yet almost exclusively filled with tourists there to take photos.

That's all in good fun, but the experience is far from a reflection of the street art itself. Visitors leave with a phone full of photos but little knowledge about how graffiti has gone from something heavily criminalized to something people clamor to post on Instagram.

Alan Ket, a well-known graffiti artist from Brooklyn who curated art galleries near the Walls for more than a year, witnessed that gap firsthand.

"Sitting in the Wynwood Walls for a year talking to tourists every single day, I got to really understand what was missing," Ket, 51, tells New Times. "Tourists need context for the neighborhood, for the walls. In that learning, I saw the opportunity."

The Museum of Graffiti, which Ket cofounded in 2019 with Allison Freidin, was his solution.

"As an outsider in the subject matter, I could walk around Wynwood or even the Walls and not learn anything about the artists or the technique or the background, and that was a huge problem," says Freidin, 37, a former Miami-Dade assistant state attorney and a third-generation Miami native. "You can go into any major metropolitan museum in the world and find a genre that you like and learn more about it. But [for graffiti] that did not exist anywhere in the world, as far as I'm concerned, until Ket and I went on this adventure."

Now, in a new location directly next to the Wynwood Walls, the duo hopes visitors will take advantage of the opportunity to learn about graffiti as more than just IG-worthy street art.

Ket and Freidin decided to relocate from the museum's original home on the northeast corner of NW 25th Street and NW Third Avenue when they learned that the new Moxy Hotel would be built right next door and that construction would last for at least two years. 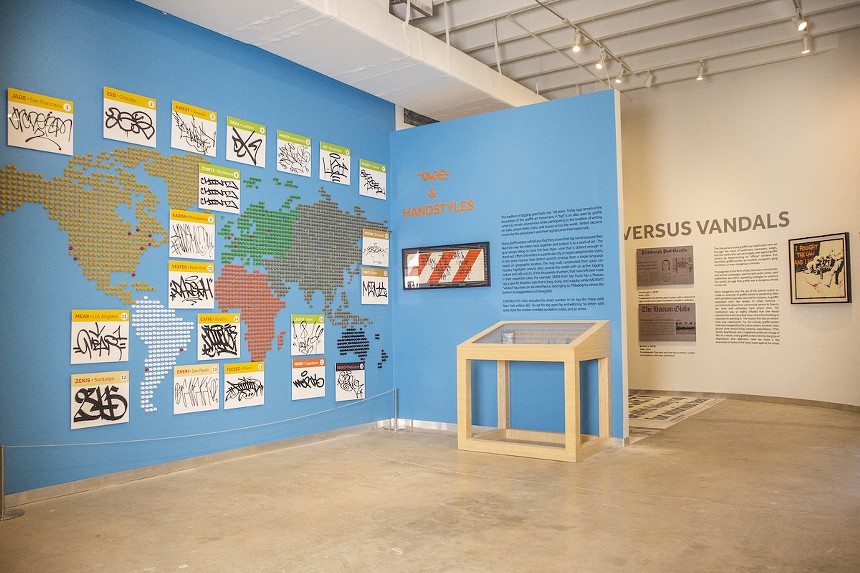 The Museum of Graffiti's larger space allows it to put on more ambitious exhibitions.
Photo courtesy of the Museum of Graffiti
"We felt it when they started digging," Ket says. "We really wanted to escape in order to be able to survive as a museum. You see it every day — when buildings go up, whoever is right next door to them tends to go out of business."

LBK Shoes, a long-standing shoe warehouse at 276 NW 26th St., just feet away from the Wynwood Walls entrance and a block away from the museum's former location, happened to have recently been gutted. Ket and Freidin began preparing the space in January and closed the museum on February 1 to work full-time on the move. It finally opened to the public on March 4.

The new exhibit is made up of donated and loaned works — the museum functions mostly off ticket sales. But Ket and Freidin's long-term goal is to find supporters whose investments will allow them to have a permanent space and collection.

"The hope is to keep growing. I mean, the story that we're telling is a very big one. So yeah, we could use 100,000 square feet," Ket says, laughing. "We're only confined by space, but not by our imagination."

"I could walk around Wynwood or even the Walls and not learn anything about the artists."

Nowadays, graffiti artists are celebrated, commissioned, and even famous. But the Museum of Graffiti doesn't let you forget where the culture began: at the nexus of police brutality and public disdain.

One of the first sights greeting visitors to the museum is a floor-to-ceiling mural of a blue creature in a police uniform peering angrily over a wall at an alien wielding a spray-paint can.

Around the corner is another wall inscribed with the words "cities versus vandals," with "vandals" crossed out with spray paint and "artists" written in its place. The display highlights examples of excessive punishments to graffiti artists with photos, news headlines, and signed and numbered print by famed British street artist Banksy's "I Fought the Law," which is on loan from Jordan Bratman, Christina Aguilera's ex-husband. 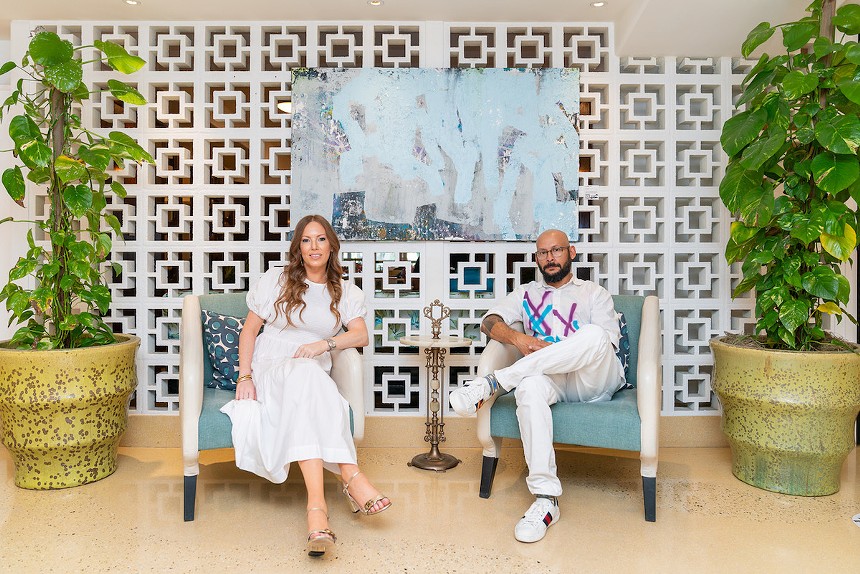 Allison Freidin (left) and Alan Ket cofounded the Museum of Graffiti in 2019.
Photo courtesy of the Museum of Graffiti
Ket says the new exhibit, titled "The Wide World of Graffiti," also presents new works on a much larger scale. The pair took advantage of the new space's nearly doubled square footage with elements like a wall-size world map composed of spray nozzles, and detailed profiles of graffiti trailblazers Lady Pink and Cornbread.

Historically, the art form has been fleeting by its nature, owing to illegality, government efforts at erasure, and competition among artists. So the museum can't rely on artworks alone. An area dedicated specifically to train and subway graffiti consists of a wall of photographs — including some shot by Ket when he was 16 — and decades-old documents.

Different, too, from the museum's original exhibit is the emphasis on the evolution of graffiti artists into pop-culture influencers.

"There was very little that we presented on current day," Freidin says about the museum's original iteration. "We've completely flipped that upside down and are basically picking up where we left off, telling the story of how graffiti goes into commerce and takes over the world and various industries in the mass marketplace."

A slew of album covers, skateboards, and other installations put the breadth of street artists' work in perspective.

"We believe that it's important to sort of lift the veil and show the true side of these artists, that they're multidimensional," Ket says. "These are the artists that are changing the visuals, the way that we see everything daily, and the things that we consume from cereal box packaging to TV commercials to skateboards to album covers. It's graffiti writers that are designing it all; people just don't know."

What do the Beastie Boys and Mary J. Blige have in common (besides hip-hop and the '90s)? Hello Nasty and What's the 411? Both album covers were conceived by graffiti-artist-turned-creative-director Cey Adams with help from other artists who started on the streets. 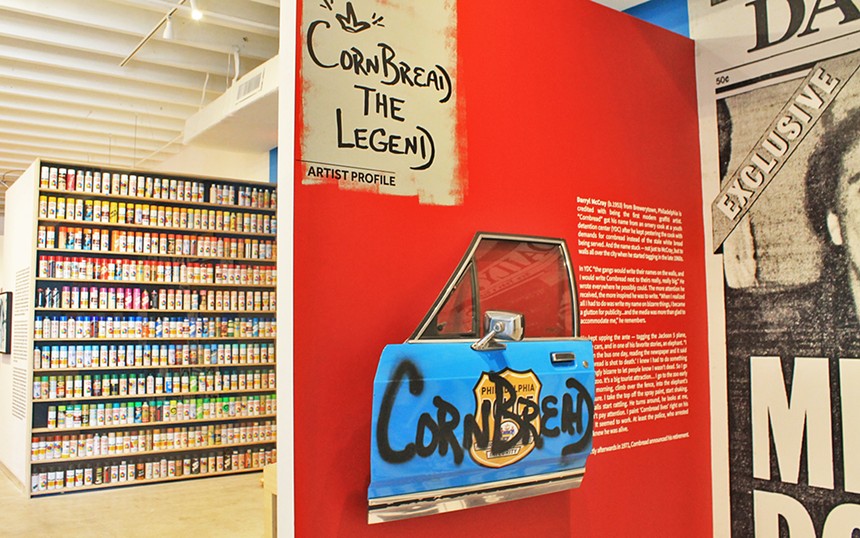 "The Wide World of Graffiti" profiles of graffiti trailblazers Lady Pink and Cornbread.
Photo by Emmalyse Brownstein
That's not to say commercialization isn't always beneficial to artists. According to Ket, some companies have taken advantage of street art's popularity for their own benefit.

In December, Ket posted an Instagram video of him at the Balenciaga store in the Design District. He showed that "Gucci" was seemingly spray-painted across the window in giant letters. But when he moved the camera nearer, it was clear the tag was a sticker.
​​
"This is upscale fraud. This is what happens when you've got these fashion brands that want to be down with the streets, but they're really just fake," Ket narrates in the video.

"This is what happens when you've got these fashion brands that want to be down with the streets, but they're really just fake."

Hiring an actual artist would've made the work not only authentic but impactful in that artist's life, he argues.

"They are taking what normally would have been the most radical form of anti-authoritarian graffiti writing, this huge extinguisher tag, and they turned it into a commodity. They turned into a sticker and used it to sell bags or whatever," Ket tells New Times. "It took all the power out of it. It reduced it to a caricature of itself. And that's why I feel like it was just so obnoxious."

The public seems eager to learn about such history from the museum — two different groups of people walked in the mistakenly unlocked doors within an hour of each other while the exhibit was still under construction. One group even bought items from the gift shop despite not being able to tour the exhibit. Album covers, skateboards, and other installations put the breadth of street artists' work in perspective.
Photo courtesy of the Museum of Graffiti
Though the museum dips its toe into the metaverse with an NFT display and a VR graffiti experience, it also pays homage to local history.

Much like graffiti itself, what once made Wynwood undesirable now makes it the epitome of cool. Industrial buildings and windowless warehouses of the working class made way for a hip, urban gentrification of what was once a predominantly Puerto Rican neighborhood.

Freidin says those origins inspired the current theme of the museum's corner gallery space, which is set up to rotate quarterly. For the opening, the museum will exhibit works from Puerto Rican artists.

"This inaugural show is going to be bringing back Puerto Rican artwork to Wynwood, and that's extremely important to do that for this community as a reminder of what the roots of this neighborhood really are," she adds.

The museum intentionally ends its exhibit with a wall of ways graffiti artists use their medium to comment on politics and social justice: one an ad for "Tent City, Florida Retirement Home" and another a sign to "contact trace government officials."

"As you walk out into the world and leave the exhibition," Freidin says, "that will be the last thing that you see: a reminder to say something when you see something."

Museum of Graffiti. 276 NW 26th St., Miami; 786-580-4678; museumofgraffiti.com.
KEEP MIAMI NEW TIMES FREE... Since we started Miami New Times, it has been defined as the free, independent voice of Miami, and we'd like to keep it that way. With local media under siege, it's more important than ever for us to rally support behind funding our local journalism. You can help by participating in our "I Support" program, allowing us to keep offering readers access to our incisive coverage of local news, food and culture with no paywalls.
Make a one-time donation today for as little as $1. 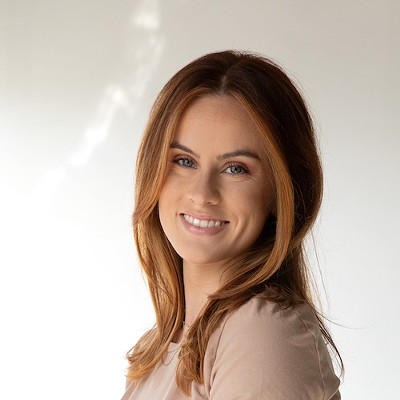