Meet Mira Lehr, the Eco-Feminist Using Art to Save the Shore

Mira Lehr Courtesy of the Museum of Contemporary Art, North Miami
Twisting and turning, a delicately crafted mangrove constructed of rope and steel snakes through the air, impossibly knotted but still unmistakably distinct in its path forward. A red line runs boldly along a gnarled makeshift branch, connecting it with another sapling looming ahead.

Onward, the splash of crimson continues — a solitary line that circles up, down, and around an airy gallery, connecting a community of eight giant mangrove installations.

Encompassing those who amble by, this network of endangered trees is the focal point of Mira Lehr’s upcoming exhibition, “Tracing the Red Thread,” which opens Thursday, September 6, at the Museum of Contemporary Art. A labyrinth-like, multimedia affair, the show promises an interactive experience inspired by the environmental problems facing Florida.

The namesake of Lehr’s theme stems from a fitting root: Greek mythology tells the tale of Ariadne’s thread, in which a spool of thread offered by a heroine leads a hero to solve a complex labyrinth and escape the clutches of a beast. For Lehr, a strand marking the way around a maze of her art represents a resolution to a persistent problem today: the critical threats afflicting Florida’s shoreline.

“If the ocean gets sick, we get sick, so that is a big issue... So the idea is that you follow the red thread," she explains. "Try to find solutions to what’s ailing us.” 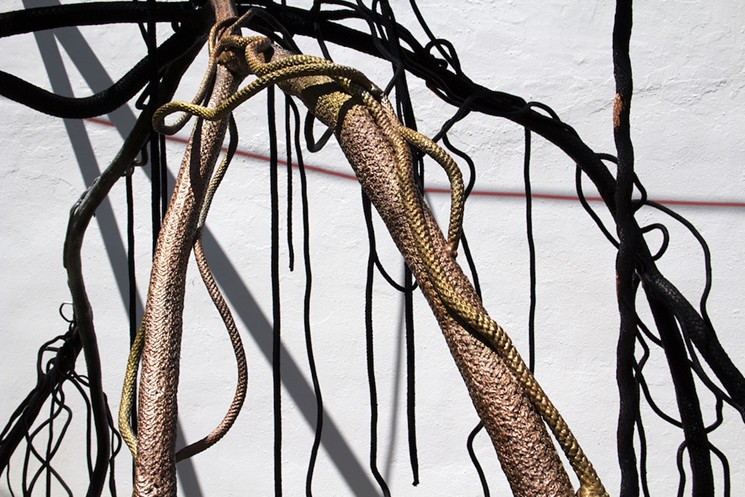 Lehr's mangrove labyrinth will dominate her upcoming exhibit at MOCA.
Courtesy of Mira Lehr
Sprawling across nearly 23,000 square feet, the exhibition includes not only ceiling-high mangroves but also paintings taller than telephone poles. Her first foray into three-dimensional productions, the use of rope and steel for the coastal trees has been a breakthrough that inspired the artist to work larger. “It came upon me little by little. I never intended that I’d end up in such a gigantic effort.” A work that took more than a year, the installations were born in Lehr’s own backyard.

Dubbed an “eco-feminist,” she incorporates nature-based movements, light, and patterns into her work in order to remind viewers of the elements of the sea. Lehr remains concerned about the state of global and local ecology, as well as the lack of leaders in society to acknowledge the problems. She describes it as “a misuse of the Earth in a way that I don’t think would happen if women were more in charge of running things.”

One of the leaders of the female abstract expressionism movement in the '50s and '60s, the multimedia artist cofounded the Continuum Gallery in Miami, one of the first female co-ops in the Southeast. No stranger to acclaim, her past work has been featured in national and international galleries, including the Smithsonian American Art Museum and the Getty Museum.

A meticulously designed larger-than-life exhibition, "Tracing the Red Thread" is meant to resonate due to its technical mastery and practical message. Much like the labyrinth it displays, the cause is one in which Lehr invites us to get lost.

“It’s a show for everyone. I’m hoping that the beauty of these pieces will make people realize what terrific treasures we have living on this planet," she says. "Let’s take care of it, let's guard it, let nothing bad happen anymore by our hands.”

"Mira Lehr: Tracing the Red Thread." Thursday, September 6, through November 4 at Museum of Contemporary Art, 770 NE 125th St., North Miami; 305-893-6211; mocanomi.org. Admission costs $5 for adults and is free for museum members, children under 12, North Miami residents, city employees, and U.S. military veterans.
KEEP MIAMI NEW TIMES FREE... Since we started Miami New Times, it has been defined as the free, independent voice of Miami, and we'd like to keep it that way. With local media under siege, it's more important than ever for us to rally support behind funding our local journalism. You can help by participating in our "I Support" program, allowing us to keep offering readers access to our incisive coverage of local news, food and culture with no paywalls.
Make a one-time donation today for as little as $1.
Ayurella Horn-Muller is a South Florida native, Florida State University alumna, and freelance journalist. She covers arts, culture and music for Miami New Times, and news for New Times Broward-Palm Beach. You can also catch her work in Forbes, Elite Daily, Film Threat, Elephant Journal, and Face the Current.
Contact: Ayurella Horn-Muller
Follow:
Twitter: @ayurellahm