Fourth of July celebrations hit a new peak on Sunday night, as partygoers headed to E11even to catch Lunay give an incredible performance. The reggaeton star had the crowd going wild as he hopped on stage and serenaded everyone all night long.

Over the course of three days, Route, a disruptive consumer e-commerce and tracking app, celebrated the launch of its new Discover feature ushering in a new era through its private event series En Route in Miami. On the opening night of the series, Route gathered tastemakers and artists to the Summer Worth Celebrating Party at the Faena Theater providing guests with an immersive experience and exclusive show featuring singer Kat Cunning, burlesque, and other stunning performances in front of an audience of socialites and celebrities including model Adriana Lima.

Legendary DJ Alesso celebrated his birthday on Friday night at Brickell hotspot, Komodo, with a special, intimate dinner. Alesso was joined by soccer icon Ronaldinho, girlfriend Erin Cummins, and friends who surprised him with an extravagant cake by Divine Delicacies Cakes.

Since 2004, IndepenDance has lured locals and visitors alike to dance their July 4 weekend away to the best DJs in the world. This year, the event returned for its 17th edition at the Miami Marine Stadium on Virginia Key, making room for more guests than ever before. On July 4, Soundtuary presented Damian Lazarus, Chus, Guy Gerber, Sainte Vie (live), Apache, Chloé Caillet, and aDios.

The Fourth of July madness reached its peaked on Sunday night for Steve Aoki‘s STORY takeover, where partygoers let loose like never before and partied with Aoki late into the night. 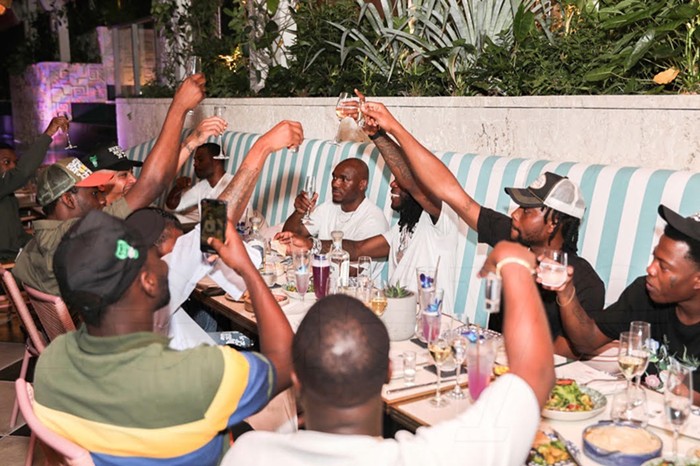 On Friday night, Burna Boy celebrated his birthday with a dinner at Strawberry Moon surrounded by all of his friends, including MMA fighter Kamaru Usman.

LIVONSUNDAY for the fourth of July was an absolute movie! Soccer legends Ronaldinho, Paul Pogba, Paulo Dybala, and Blaise Matuidi took over the club for an epic celebration alongside Burna Boy, Anitta, Swae Lee, Saquon Barkley, Kamaru Usman, and Zoey Dollaz, while DJ Don P and DJ Stevie J handled the decks and kept the party going all night long.

Fourth of July weekend at Oasis Wynwood started off on an unbelievable note, as reggaeton kings Zion y Lennox performed for a sold-out crowd that packed the venue from wall to wall.

Rácket popped off on another level Friday night when Mariah Angeliq took over and hopped on the mic for a special performance. Flo Rida was also spotted at the club getting lit alongside Miami legends DJ Irie and Mr Mauricio.

Revelers and celebs joined Miami hospitality great Roman Jones for a birthday celebration at his buzzing Coral Gables hot spot, the Gramercy, on Saturday night Billboard chart-toppers like Alexander Delgado and Randy Malcom of Gente De Zona, Jacob Forever and El Taiger joined Jones for a birthday party like no other.

The SLS Brickell hotel debuted its inaugural Seductive Fridays Happy Hour inside Saam Lounge. The happy hour is slated to be a hit among young, working professionals looking to expand their network and make new connections.

Magic was in the air at BOHO House on Friday night, as Milagros Espada enchanted guests with her live DJ set and kept them moving and grooving late into the night.

Kiki, do you love me? Because Miami sure does! On Sunday night, the city’s weekend crowd headed to riverside hotspot, Kiki on the River, for an epic Fourth of July celebration that was one for the books.

On Wednesday night, guests gathered to celebrate the release of the Blu Scarpa Sportiva Collezione. The new collection symbolizes Blu Scarpa‘s inherent culture of classic Italian fashion, combined with American tennis-inspired pedigree into a sophisticated line of footwear and accessories; curated for both on and off-the-court attire.

It’s summer in the city and the heat is definitely on! As Miami enters one of the hottest and most exciting times of the year, World Red Eye has once again partnered with the Collection for #Drive305 to bring residents the inside scoop on the most luxurious new cars of the season by collaborating with equally as sophisticated and recognized entrepreneurs throughout the city.
KEEP MIAMI NEW TIMES FREE... Since we started Miami New Times, it has been defined as the free, independent voice of Miami, and we'd like to keep it that way. With local media under siege, it's more important than ever for us to rally support behind funding our local journalism. You can help by participating in our "I Support" program, allowing us to keep offering readers access to our incisive coverage of local news, food and culture with no paywalls.
Make a one-time donation today for as little as $1.