From a celebration of Israel’s 75th birthday featuring 29 films produced in Israel to a spotlight on French cinema and a special North American premiere of a timely Ukrainian film, New Times has scoured the lineup to provide insight on what to see and what to skip.

Winner of Best Picture at the Ophir Awards (the Israeli Oscars), Orit Fouks Rotem’s Cinema Sabaya is a revelation. Exploring contemporary Israel through a group of nine diverse women taking part in a filmmaking workshop, the film centers on cinema and women, as its title suggests. "Sabaya" means women in Arabic, but, as the film points out, a slight mispronunciation changes the meaning to prisoner of war. This linguistic slip echoes how the film explores and interrogates the idea of perspective, as a participant asserts, “Everyone sees it differently.” Using filmmaking as a lens, Cinema Sabaya poignantly illustrates how what one sees, hears, and says can define that person and how changing any of these things inevitably leads to changing oneself.

One would be forgiven for mistaking Cinema Sabaya for a nonfiction film, which is a testament to the film’s authenticity. Inspired by Rotem’s own experiences leading a workshop, the film is further anchored by a stellar ensemble cast, especially the work of Joanna Said as Souad. Each performer imbues their character with such specificity and vitality that it is easy to imagine their life outside the classroom, where the film is entirely set.

While the meta-film is nothing new to cinema, Rotem’s film compellingly uses self-reflexivity. Most meta-films — that is, films about filmmaking — are often divided between the excessively cynical and the overly romantic. Cinema Sabaya is instead refreshingly impartial and receptive. The film wants to use film as a space to converse, articulate one’s perspective, and hear differing viewpoints. The women discuss myriad issues impacting contemporary Israeli and Palestinian women, from the mundane, like snoring husbands, to challenging topics like agency and control, terrorism versus resistance, occupation, domestic violence, and the differences between genders, sexualities, classes, religion, and education.

Together, the women reflect on the disparities and universalities of women in contemporary Israel. Rotem balances these complex issues with nimble filmmaking without appearing too optimistic or pessimistic about any situation. When you think the film could not get any more nuanced, Rotem throws in a fascinating examination of filmmaking and classroom ethics that might be the perfect companion piece to Nathan Fielder’s docuseries, The Rehearsal. Set in a classroom, Cinema Sabaya asks where cinema ends and real life begins — or if there is any actual divide. As the film closes, the viewer is assured of both the power and potential of cinema and women. 8:30 p.m. Monday, January 16, at Miami Theater Center and 8 p.m. Wednesday, January 25, at Coral Gables Art Cinema. Streaming online January 17-25.

Few films have captured children's unique magnetism or casual cruelty as beautifully as French filmmaker Rebecca Zlotowski's Other People's Children. A delightful slice of life that perfectly balances romantic drama with romantic comedy and provides sublime observations about yearning for intimacy and family while feeling perpetually at a distance. Rachel (Virginie Efira), a 40-year-old teacher with no children, meets and falls in love with Ali (Roschdy Zem) and discovers an added complication when she meets and falls in love with his young daughter Leila (Callie Ferreira-Goclaves).

Zlotowski reaches new heights with her fifth feature by mining her life for inspiration. This introspective autofiction gives the film emotional honesty — both heft and levity — that reflects real life. In Other's People Children, Zlotowski fully extracts all the heartache and joy from the material resulting in a film that can only be described as charmant.

Part of the film's charm comes from its careful and reflective observations about love, family, and life. This observational approach makes the unexpected cameo by Frederick Wiseman, the nonagenarian master documentary filmmaker, as Rachel's gynecologist, absolutely essential. It may turn out to be the 2023 equivalent to David Lynch's pivotal appearance in Steven Spielberg's The Fabelmans. Likewise, the main cast of Efira, Zem, and Chiara Mastroianni (in a small part as Ali's ex-wife) elevate the already exquisite material. Efira, in particular, anchors the film, appearing in every scene and continuing to establish herself as one of Francophone cinema's most captivating stars.

Perhaps the most impactful part of Zlotowski's film is what she has to say about motherhood. Other People's Children asks what a mother is and whether you must have a child to be one. Rachel becomes the embodiment of the maternal — not an idolized Madonna, but a real woman who nurtures, protects, and inspires those around her. It's difficult to articulate the magic of Other People's Children, and you never want the film to end — even as Zlotowski provides multiple perfect endings plus an epilogue. 3 p.m. Sunday, January 22, at Bill Cosford Cinema. 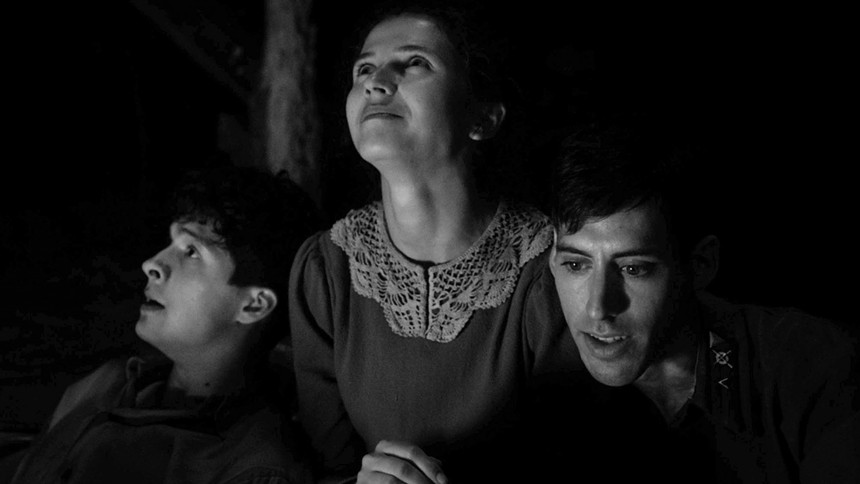 Ady Walter's Shttl makes its North American debut at this year's festival. The premiere is timely as the film explores the happenings of a small Jewish village in Ukraine before the invasion by an outside power. It's a lesson of history repeating itself as Ukraine is again under attack. Unfortunately, the history and production of Shttl prove more interesting than its final product. The all-Yiddish production was filmed in Ukraine on a massive set that recreated an authentic shtetl, which will be preserved as an open-air museum to teach about Jewish history.

The film charts the Barbarossa Operation 24 hours before the Nazis invaded Soviet Ukraine from bordering Poland. The marketing angle and potential selling point of the film is that it unfolds in a single, continuous shot — or rather, with well-hidden edits giving that effect. It's a technique employed sporadically over the last decade, in films such as Silent House (2011), Victoria (2015), and 1917 (2019), some successful and others not. Shttl is in the latter. The foundational problem with Shttl is the incongruity between the content and the form.

The crisp digital cinematography undermines its historical setting and craftwork on screen. Furthermore, the fluid camerawork feels predictable rather than poetic. Ultimately, it is the single-shot approach that hurts the film the most. It does not fit or complement the narrative, quite the contrary. A further conundrum is Walter's decision to move between past and present via shifts from black and white into color, which only weakens the sense of suspense in the storytelling. Perhaps Shttl would be a more engaging film had the filmmakers done away with the technical stunt.

Despite what feels like a lot of work in production design, cinematography, and editing, the film is remarkably uncinematic. It feels like a history lesson coming to life, but in a stilted way. Watching the film felt akin to being trapped in an expansive community theater production or stuck on a school field trip to Colonial Williamsburg. Overall, Shttl and its "single" shot borders on tedious. What may have felt exhilarating on paper feels exhausting in practice. 8 p.m. Sunday, January 15, at Miami Theater Center.

Miami Jewish Film Festival. Thursday, January 12, through Thursday, January 26, at various locations; miamijewishfilmfestival.org. Tickets cost $14 to $325.
KEEP MIAMI NEW TIMES FREE... Since we started Miami New Times, it has been defined as the free, independent voice of Miami, and we'd like to keep it that way. With local media under siege, it's more important than ever for us to rally support behind funding our local journalism. You can help by participating in our "I Support" program, allowing us to keep offering readers access to our incisive coverage of local news, food and culture with no paywalls.
Make a one-time donation today for as little as $1.