Typoe Resurfaces With a Larger-Than-Life Body of Work 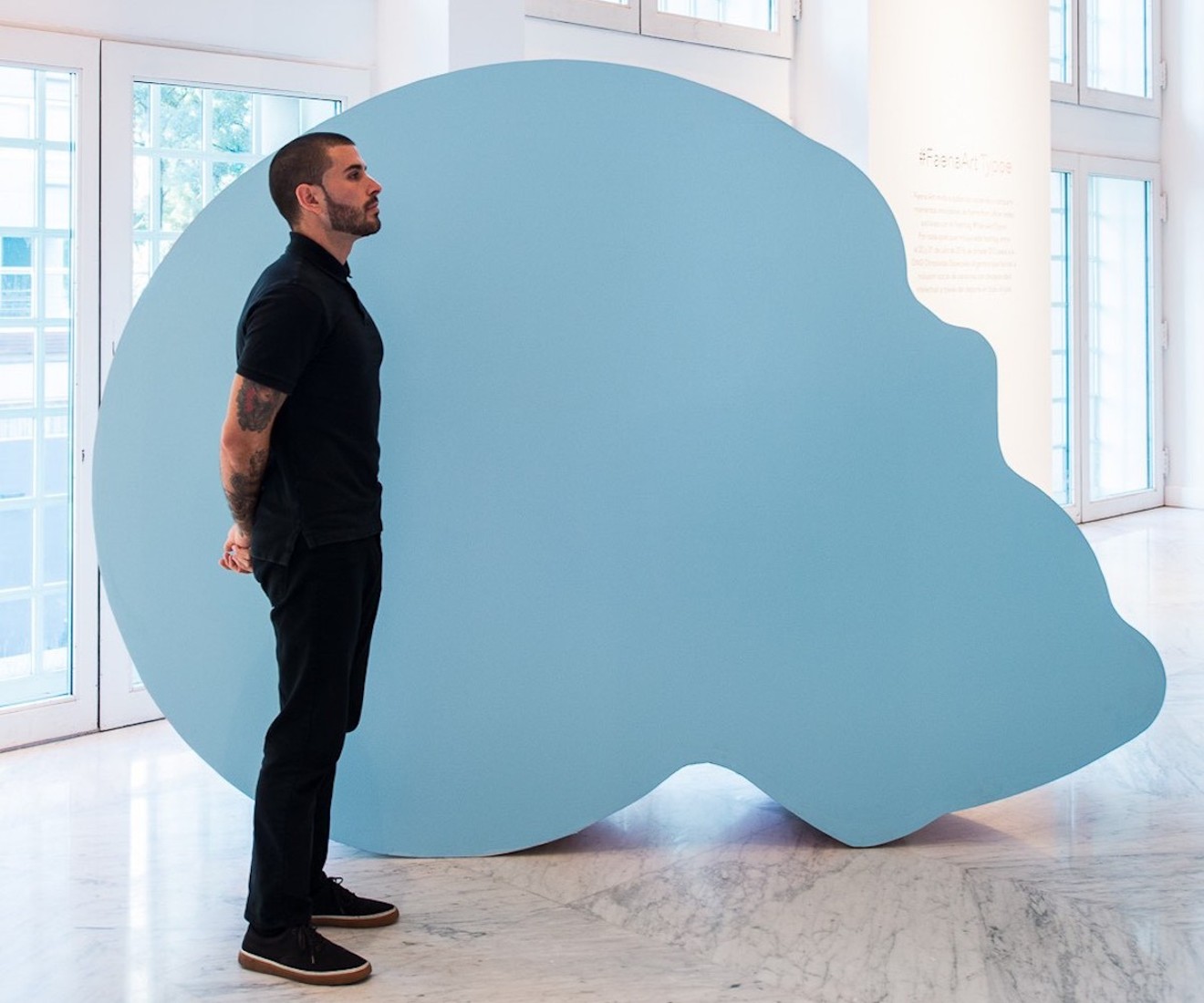 Typoe stands next to one of his large-scale sculptures. Photo courtesy of Michael Gran
It’s an ordinary Tuesday in March, and Miami artist Typoe is working in his Little Haiti studio. The sky starts to settle from daylight to a silver evening hue. The artist, whose given name is Michael Gran, answers the door to his studio with a paintbrush resting naturally between his teeth.

The space itself is like a large blank canvas — empty white walls and bare white ceilings. Paint cans lie on the floor, and miniature prototypes take up space on a large (white) table. Incomplete masterpieces lie in anticipation, waiting to be touched by their creator.

In stark contrast to his all-white studio, Gran himself is dressed in all black.

A tiny grim reaper holding a scythe creeps from the corner of the only table in the studio. It’s painted black, save for the bright yellow at the tip of the scythe. The piece is a prime example of the theme that influences Gran's work: the macabre mixed with a pop of positivity.

As an artist, Gran is interested in the delicate balance between light and dark. He straddles the line between the opposing forces and often marries the two with whimsy and delight. His signature style consists of clean, sharp lines filled with bursts of fantastical color. And there will likely be a skull or black raven incorporated into the piece.

“It’s this balance of the happiness in life and the darkness in life,” Gran says as he moves his hand down his paint-speckled shorts. “And I think part of the balance is how one serves the other, so that’s kind of like the theme throughout [my work].”

He works in all sorts of media, including metal, wood, neon, gunpowder — anything that he can get his hands on.

“I really just like to explore things that are in my landscape," he says. "I try and challenge materials and see what use I can find for them.” 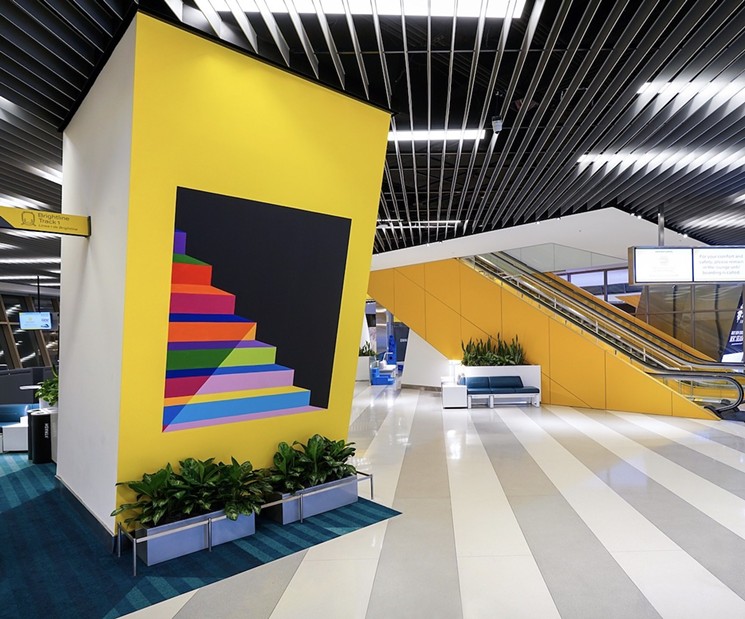 One of three Typoe murals at the Brightline MiamiCentral station.
Photo courtesy of Michael Gran
Gran grew up surrounded by fine art and artists. His mother is an artist; his older sister is an artist. His great aunt is an artist who carves marble. Art is in his blood.

The 37-year-old has been making art for nearly two decades, from the streets of Miami to fine-art galleries to international art centers to museums. He’s even done collaborations with top fashion brands like Adidas, Rag & Bone, and Del Toro.

“People think that I went from graffiti to fine art, but I always did art. Graffiti was more of a sport for me,” he says.

“People think that I went from graffiti to fine art, but I always did art. Graffiti was more of a sport for me."

Gran says one of his goals as an artist was to be able to create large-scale public art pieces. He achieved that in 2016 when he created Forms From Life for developer Alan Faena’s Faena Art Center in Argentina.

The sculptures were so massive they wouldn’t fit back in his studio, so once the exhibit was over, the artist donated them to schools, children’s hospitals, and other public institutions throughout Argentina.

“That was the first time in my career someone ever approached me and said, ‘Whatever you want, go!’” says Gran as his eyes widen. “Ever since then, I didn’t want to do little things anymore.”

He’s kept true to his vision and continued to work toward his larger-than-life goals.

Typoe's installation at SoHo Beach House.
Photo courtesy of Michael Gran
In 2018, he painted three murals inside Brightline’s MiamiCentral station before working on a massive outdoor mural at the Wynwood 25 building in 2019. Later that same year, he created more large-scale outdoor sculptures for the Arkansas-based Crystal Bridges Museum’s “Color Field” exhibition, which is currently on display at the University of Houston amid a tour around the U.S.

And the multidisciplinary artist is preparing for two exhibitions this year. The first, a group show titled “Can’t Wait to Meet You,” opens at Primary Projects on Saturday, April 3, and features over a dozen artists. The second is Gran’s first solo show in nearly three years. You can expect that one later this fall, also at Primary, the art gallery he cofounded in 2007 with partners Cristina Gonzalez and Books Bischof.

On the topic of starting his own gallery space, Gran says matter-of-factly, “We opened Primary because we wanted to see the work we like shown. We just love art.”

Being a gallery owner who represents fellow creatives is natural for Gran. As an artist himself, he can anticipate the needs of those who work with Primary. 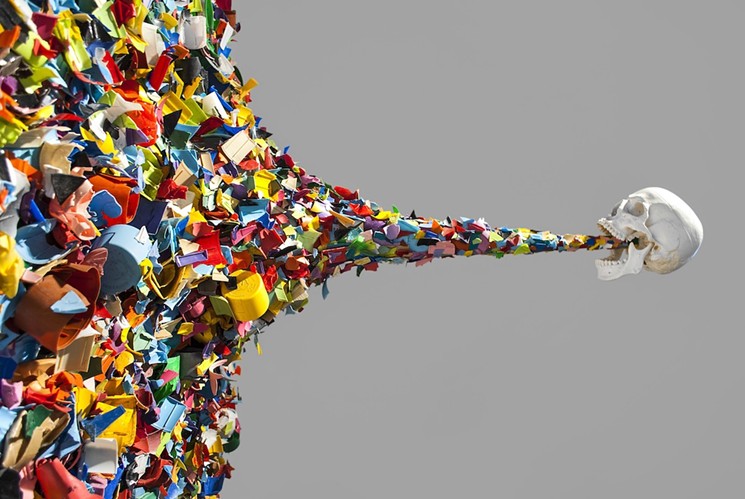 Confetti Death, 2010.
Photo courtesy of Michael Gran
“I want everybody that we work with to create their masterpiece,” he says. “I want them to create something that they’re proud of and something that they want to leave behind. To me, that’s the goal, and because I am an artist myself, I get it intuitively.”

The defining moment of Gran’s career was the debut of Confetti Death, a piece that captivated audiences — and dealers — during Miami Art Week 2010.

“Since then, everything changed for me,” he says. “[The last decade has] been a steady incline of learning, building, working, juggling owning a gallery with my partners, doing projects, managing projects, doing bigger projects, trying to do art in public places, doing fashion collaborations, working with musicians, working with developers. All these different things that require different skill sets."

If that list sounds exhaustive, imagine living it. The Miami native admits that up until 2020, his schedule was nonstop. When the pandemic hit, the busy artist took it as a sign to pause, refocus, and recenter.

“I didn’t make anything. I isolated myself inside for months,” he says.

Whereas all his projects stopped at the beginning of 2020, Gran is once again booked solid.

“I’m doing commissioners for clients, large-scale works. It’s been insane. Over the next six months, I’m going to be dropping a ton of new work.”

So what’s next for Typoe? He cocks his head to reveal a maniacal grin.

"Can’t Wait to Meet You." Opens noon to 7 p.m. Saturday, April 3, at Primary Projects, 7410 NW Miami Ct., Miami; 954-296-1675; thisisprimary.com. Admission is free.
KEEP MIAMI NEW TIMES FREE... Since we started Miami New Times, it has been defined as the free, independent voice of Miami, and we'd like to keep it that way. With local media under siege, it's more important than ever for us to rally support behind funding our local journalism. You can help by participating in our "I Support" program, allowing us to keep offering readers access to our incisive coverage of local news, food and culture with no paywalls.
Make a one-time donation today for as little as $1.