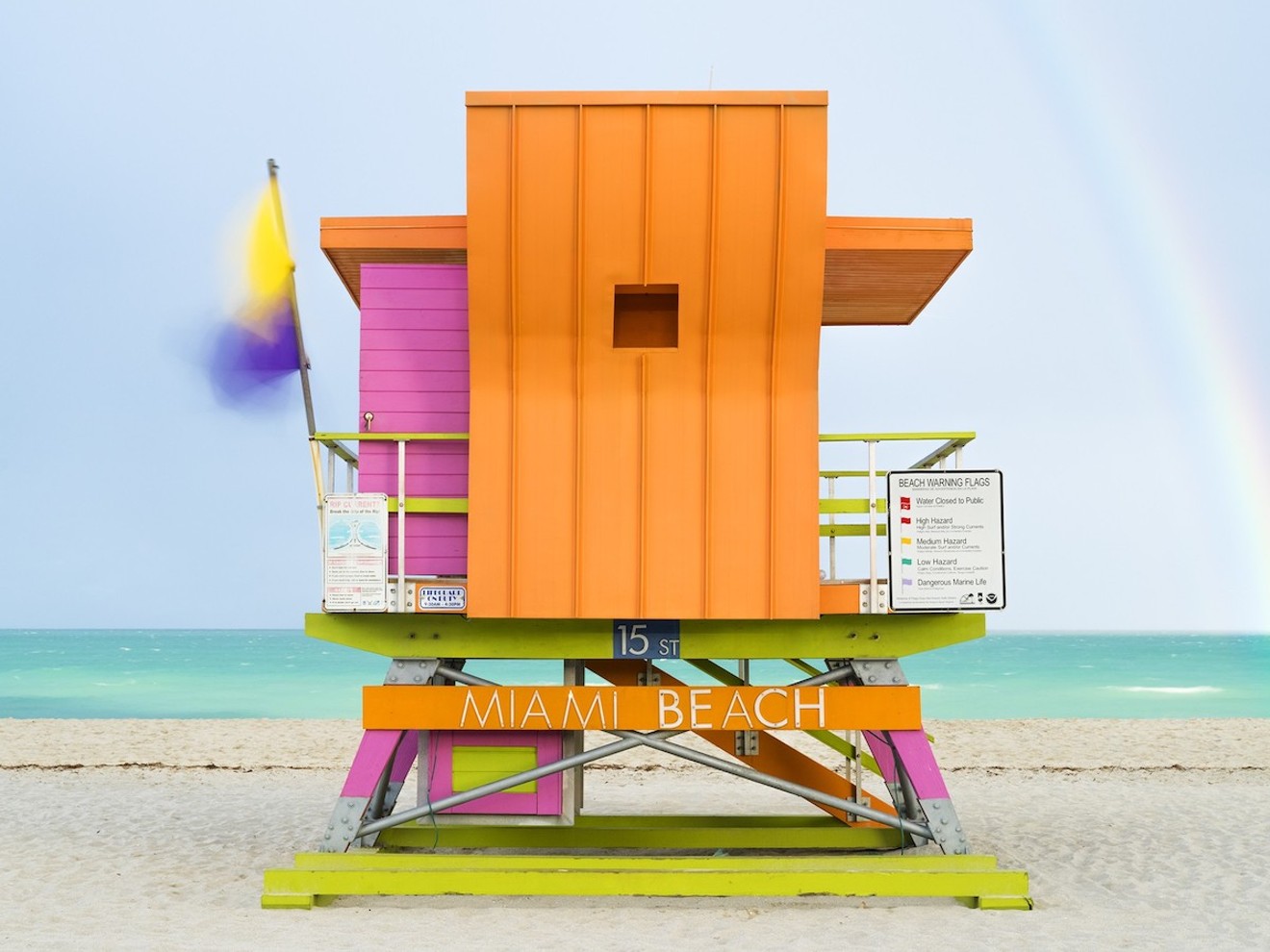 Miami Beach's iconic lifeguard towers are the subject of photographer Tommy Kwak's latest photo book. Photo by Tommy Kwak
Sitting on the sands of Miami Beach are 36 wooden lifeguard towers painted in all sorts of vibrant hues: bright orange, neon green, purple, pink, and many shades of blue. They sit neatly in a line along the beach from South Pointe Park up to 87th Street.

These lifeguard stands are not only fully functional — yes, lifeguards still patrol from them — but incredibly photogenic. The art deco-inspired towers by architect William Lane have probably been photographed more than the sunrise against the ocean water.

In his latest photo book, photographer Tommy Kwak took up the challenge to capture all 36 towers in their bright glory.

Kwak first encountered one of the iconic lifeguard stands while visiting Miami in 2019. A pink tower caught his gaze and sparked his creativity. The photographer proceeded to walk up and down the 8.5 miles of beach to capture the towers during various trips that followed. He then compiled the images for a new photo book titled Lifeguard Towers: Miami.

A graphic designer by education, Kwak admits he took up photography nearly 20 years ago when he first moved to New York City.

“I was mostly doing street and documentary type photography, really just carrying my camera with me everywhere,” Kwak tells New Times via email. “I took a few classes but I mostly taught myself just by constantly shooting.” 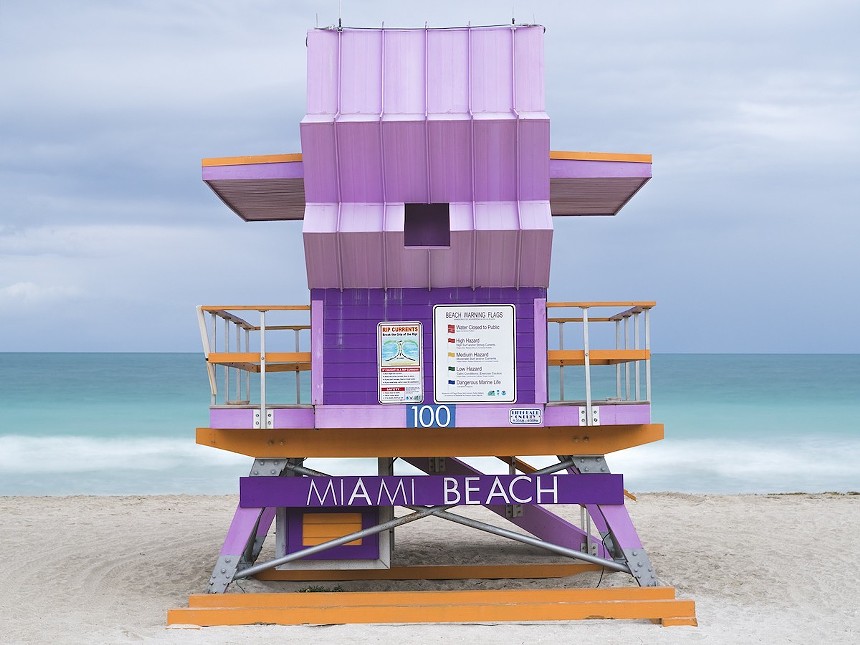 Architect William Lane designed Miami Beach's art deco-inspired lifeguard towers.
Photo by Tommy Kwak
The NYC-based photographer specializes in landscape photography and points to a trip to Iceland that inspired his passion for capturing nature. Each new location he visits — and oftentimes, repeat trips to familiar places — leaves a lasting impression on Kwak, and he’s sure to capture it all on film.

“I love to be outdoors and near water, so traveling to Iceland, Faroe Islands, Miami, and other coastal areas became natural subjects for my photography,” he says. “Most of my photography is of water-based subjects, whether traditional seascapes or abstract interpretations of waves. So this love of the water exposed me to lifeguard towers first on Miami Beach, then Southern California, and then closer to home in Montauk, New York.”

Of course, nature aside, Kwak was also really attracted to the bright, fun colors of the lifeguard towers. Kwak wanted to showcase the Miami Beach lifeguard towers in a unique way and make them the star of the shot, which can be challenging when the blue sky and ocean waters are so damn gorgeous.

Explaining his process, Kwak says how he tries to only use natural lighting. In addition to shooting early mornings, he employed two unique photographic methods. 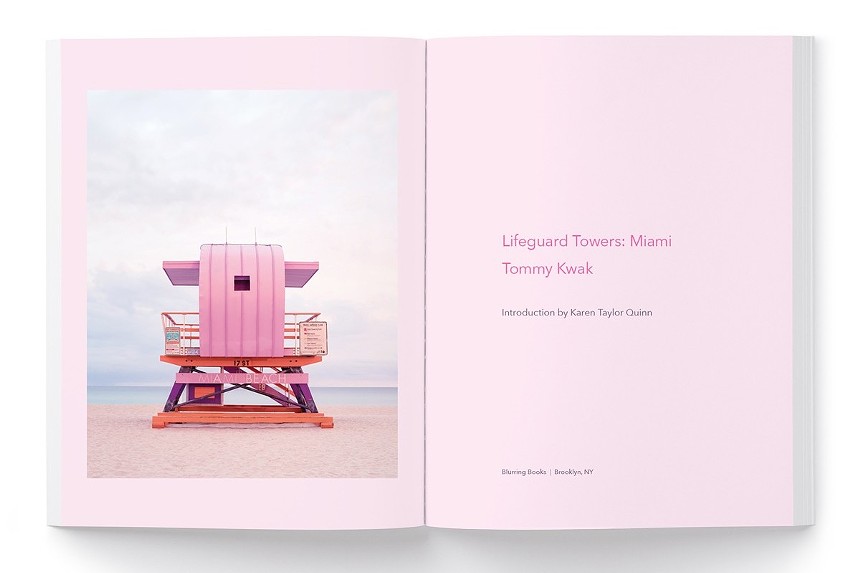 Kwak's photo book will be released later this fall.
Photo by Tommy Kwak
“To further showcase the vibrant colors and structural idiosyncrasies of the towers, I used two main photographic devices," he explains. "First, I used similar straight-on and centered framing across all the photographs to isolate the towers and to create a consistent and neutral background. In this methodical way, the tower becomes the focus and not the angle it was shot, so they are objectively documented as purely as possible."

“Secondly, I photographed using long exposures to reduce the sky and sea backdrops. This greatly softened the details of the ocean waves and clouds, making it more painterly and pushing them into the background, in order to highlight the traits of each tower.”

Lifeguard Towers: Miami, a gorgeous 42-page photo book with a foreword by the New Yorker’s Karen Taylor Quinn, is slated to be published later this year by the Brooklyn-based Blurring Books. The photos from the lifeguard tower series are currently on display at Clic Gallery, which represents the photographer.

Follow Kwak and Blurring Books on Instagram to stay up-to-date on the book's fall release.
KEEP MIAMI NEW TIMES FREE... Since we started Miami New Times, it has been defined as the free, independent voice of Miami, and we'd like to keep it that way. With local media under siege, it's more important than ever for us to rally support behind funding our local journalism. You can help by participating in our "I Support" program, allowing us to keep offering readers access to our incisive coverage of local news, food and culture with no paywalls.
Make a one-time donation today for as little as $1.