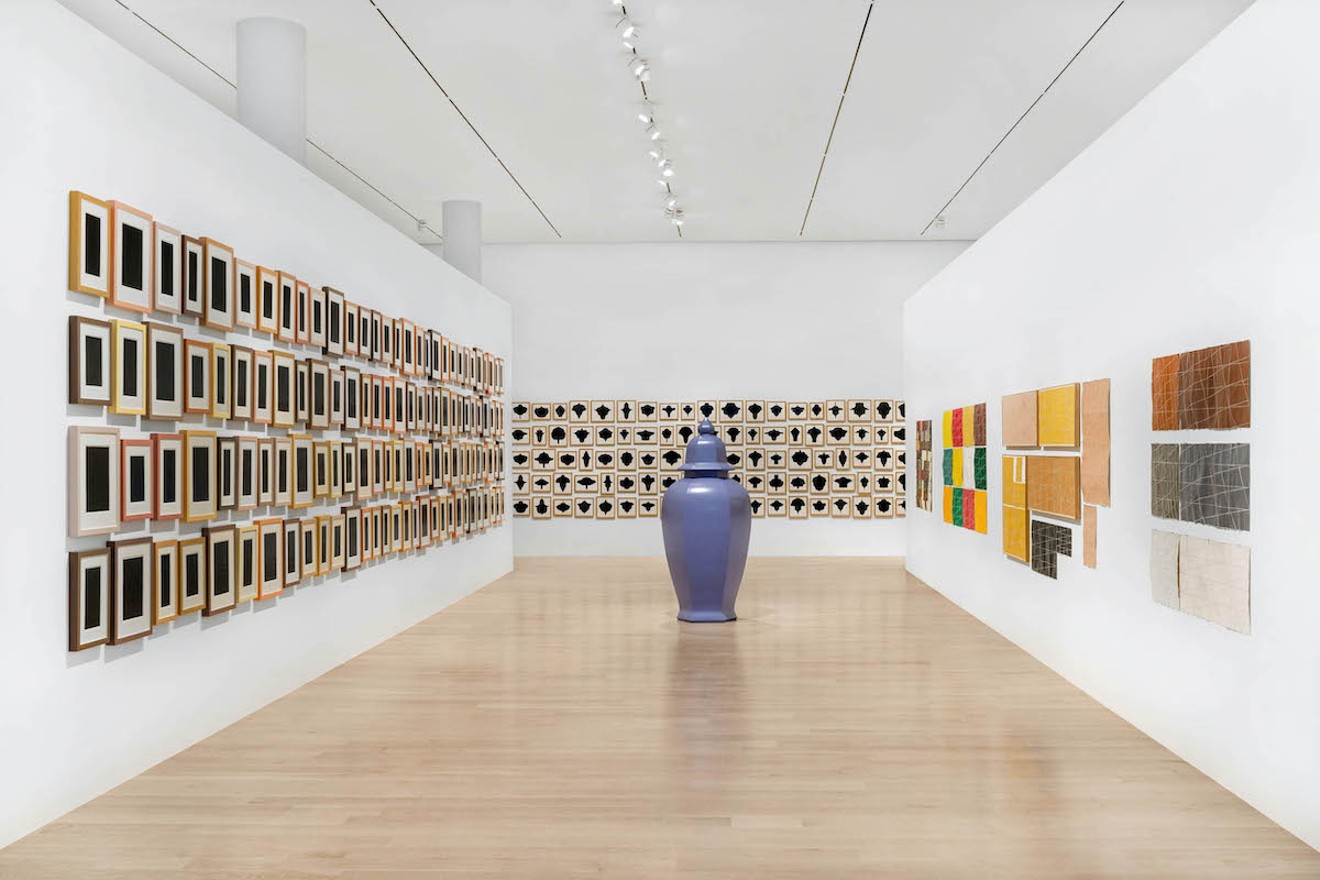 "Allan McCollum: Works Since 1969" now on view at ICA Miami. Photo by Zachary Balber/courtesy of Institute of Contemporary Arts, Miami
Like everything left in the pandemic's wake, Miami's cultural institutions have struggled under the shutdown. Their sudden closure left everyone scrambling to provide the kind of outreach programming they were more accustomed to doing in person.

The Institute of Contemporary Arts, Miami — which opened in 2017 after the leaders of the Museum of Contemporary Art in North Miami found themselves in a legal battle with city officials over the future of the museum — had perhaps been better equipped to deal with the fallout. During the shutdown, the museum kept its First Fridays event going, and also its Family Day Animation Film Festival. In May, it also announced the "Digital Commissions" program, which commissioned art from eight Miami artists.

But ICA leaders still hoped to be able to have patrons roam its galleries once more. And starting on Wednesday, they will.

"We are delighted that we can share our finally share our Allan McCollum and Tomás Esson exhibitions with audiences," says Alex Gartenfeld, the museum's artistic director. "What's even more exciting is the response we've gotten from our audience. We have endeavored to create a safe environment for visitors and staff."

The reservation system is key. All visitors must reserve a ticket online. (Museum members get a one-day head start on Wednesday, September 3, while the general public is welcome to begin making reservations the following day.) The museum is open Wednesday through Sunday. ICA remains free, but because capacity has been cut to ensure adequate social distance, the ticketing process allows for crowd control. Seniors and at-risk visitors can visit between 11 a.m. to noon, while the general public can enjoy the galleries from noon to 6 p.m.

"It's heartening to see that demand is strong for our programs even after a crisis like COVID-19."

Gartenfeld says the response has been nothing short of inspiring. "It's heartening to see that demand is strong for our programs even after a crisis like COVID-19," he says.

ICA will be the first major art museum in Miami to reopen, and if all goes well, it could provide a blueprint for the city's other museums to follow. (The De La Cruz Collection reopens Wednesday and the Rubell Museum reopened in July, but both are private collections.)

"Before we reopened, we wanted to ensure that all of our standards were at the highest level in terms of providing disinfectant, monitoring capacity, and making sure our visitors feel confident being with us," Gartenfeld says. "Certainly, we were looking at what some of our awesome colleagues were doing around the country and even around the world to develop policies for their audiences. That allowed us to feel confident in terms of moving forward." "Tomás Esson: The GOAT" on view at ICA Miami.
Photo by Zachary Balber/courtesy of Institute of Contemporary Arts, Miami
Though the museum is reopening, large events like lectures, workshops, and education programs will continue to take place online through ICA Channel. Not that Gartenfeld minds. The pandemic has undoubtedly helped the museum boost its online presence and provide programming to an audience that might not otherwise have a chance to visit the museum.

"All museums were faced with a challenge on how to serve the community," he says. "I was so impressed with my staff, particularly the education staff, who took pains to ensure that there was continuity in our work with teens and the underserved by being flexible and pragmatic and by meeting our audiences where they were."

Gartenfeld adds that the social and political environment, and the Black Lives Matter movement in particular, has fostered discussion among the staff about how it can support Black arts within its walls.

"We want to be equitable not only in terms of the artists we exhibit and collect but also across the institution," he says . "We announced two initiatives that build upon our long-term efforts — one of which is being majority-minority in terms of our programming; the second is dedicating three-quarters of our discretionary funding to acquisitions of work by Black artists."

In the meantime, Gartenfeld hopes that when people return to the museum this week, that they feel the energy that interacting with art generates.

The exhibitions by McCollum, Works Since 1969, and Esson, The GOAT, are a first for each artist: McCollum's first major museum survey in the U.S. and Esson's first solo exhibition.

"I hope that by having our facility open, the museum resumes its role as a hub for community and creativity," Gartenfeld says. "Bringing people together with disparate points of view is crucial to what we do."

Institute of Contemporary Arts, Miami. 61 NE 41st St., Miami; 305-901-5272; icamiami.org. Wednesday through Sunday 11 a.m. to 6 p.m.
KEEP MIAMI NEW TIMES FREE... Since we started Miami New Times, it has been defined as the free, independent voice of Miami, and we'd like to keep it that way. With local media under siege, it's more important than ever for us to rally support behind funding our local journalism. You can help by participating in our "I Support" program, allowing us to keep offering readers access to our incisive coverage of local news, food and culture with no paywalls.
Make a one-time donation today for as little as $1.