Two volunteers from COH Florida with Alison Thompson after Hurricane Sandy in New Jersey, 2012. Courtesy of Third Wave Volunteers
An alliance of grassroots organizations has banded together to deal with the aftermath of Hurricane Irma and secured a 12,000-square-foot warehouse at EcoTech Visions in North Miami as headquarters for disaster refief. Some of the organizations are arriving fresh from Hurricane Harvey, including Third Wave Volunteers, Humanitarian Aid and Rescue Project (HARP) and The Cajun Navy. Other organizations lending a hand include Georgia-based We Do Better as well as Florida-based New Florida Majority, Miami Climate Alliance, Urban Paradise Guild, Global Empowerment Mission and Rescue Warriors, a newly-formed ad-hoc group of military veterans based out of Miami with networks elsewhere in the nation.

The Community Operations Center (CEOC) will help people in the frontline of need both locally in Miami-Dade and in other Florida counties. CEOC is already working to create staging areas in the Florida Keys, Naples and Tampa.

Alison Thompson, Miami-based humanitarian and founder of Third Wave Volunteers, notes that no gesture is too small to help not just neighbors but also official agencies involved in immediate and long-term responses to disaster. “[Irma's] disasters are at a scale that overwhelm government services and rescue groups,” she says. “This helps take pressure off emergency management and government systems while improving resilience at a block-by-block level.”

The command center in North Miami, she notes, is on standby, but much help is needed to reach people locally as well as to funnel aid to the Keys and Gulf Coast. The center will also need manpower as well as donations of supplies.

"Third Wave is signing up volunteers at the warehouse," she says. "We also need boat captains with large and smaller rescue boats to assist medical teams to get into hard areas."

Sam Van Leer, President and Founder of Urban Paradise Guild, says that they’ve been putting together human and material resources to provide humanitarian support in the recovery stages of Hurricane Irma's aftermath. “There’s a bigger picture of the stuff that’s needed,” he says. “Corporations and individuals can step in.” Items needed include everything from solar-powered generators to personal hygiene items and even additional space to expand the base of operations in parking lots across the city. Food trucks can play a role.

The CEOC is also seeking volunteers who can staff operations 20 to 40 hours per week. “We need volunteer staff who can serve to lead, direct, have an administrative capacity, people who can process volunteers and direct them,” he says. “We also need electricians, inventory managers, and facilities managers.”

Grassroots volunteer efforts are critical in any disaster aid and help other relief organizations. “We’re boots on the ground,” Van Leer says. “We know the community where it’s the strongest and the weakest. Even the Red Cross is coming to us to ask where to direct their efforts.”

Burke Bryant, founder of HARP, drove into South Florida Saturday after spending seven days in Texas and is ready to help Florida deal with Hurricane Irma. The war photographer turned humanitarian offers some tips on volunteering for disaster aid, which he says needs to run like a military operation in order to be effective.

“Everybody is equally important, whether you’re picking up water bottles or doing triage,” he notes. “It takes every single person to create that wheel that moves correctly in the most efficient manner.”

Bryant encourages volunteers to leave their egos at the door and to be honest about their capabilities. “We’ve had people lie and say they’re nurses and then mess things up on the field,” he says. "We can't vet everyone in crisis situations."

“We need people who are organized and open to taking direction,” he adds. “Some people have great hearts, but others have a hero complex and that interferes with the success of the operation. This isn’t about taking a selfie and then saying you helped. Our prime concern is safety, then efficiency, in order to save lives.”

Both Bryant and Van Leer agree that volunteers should practice self-care before giving of their time. The shock that lingers during the aftermath can be emotional for many survivors. Burnout sets in even before the rain and wind subside.

“It’s all about concentric circles,” says Van Leer. “Take care of you and family first. Then check on your neighbors, especially the elderly and those with special needs. These are things you can do immediately. If you have time and resources, then join an effort and reach out.”

Here’s how you can help:

UPG has set up a volunteer roll call on Facebook starting on Monday, September 11 at 8 a.m. through September 25. Check the page for updates about the CEOC as well as local news bulletins before setting out to volunteer. Make sure it's safe to drive.

Third Wave Volunteers and Citizens of the World have posted a fundraising campaign for solar lights to help those living with power outages, which could last for weeks. Visit Hurricane Irma Relief and Giving Solar Light to Florida.

For a list of items needed, visit the CEOC’s landing page. 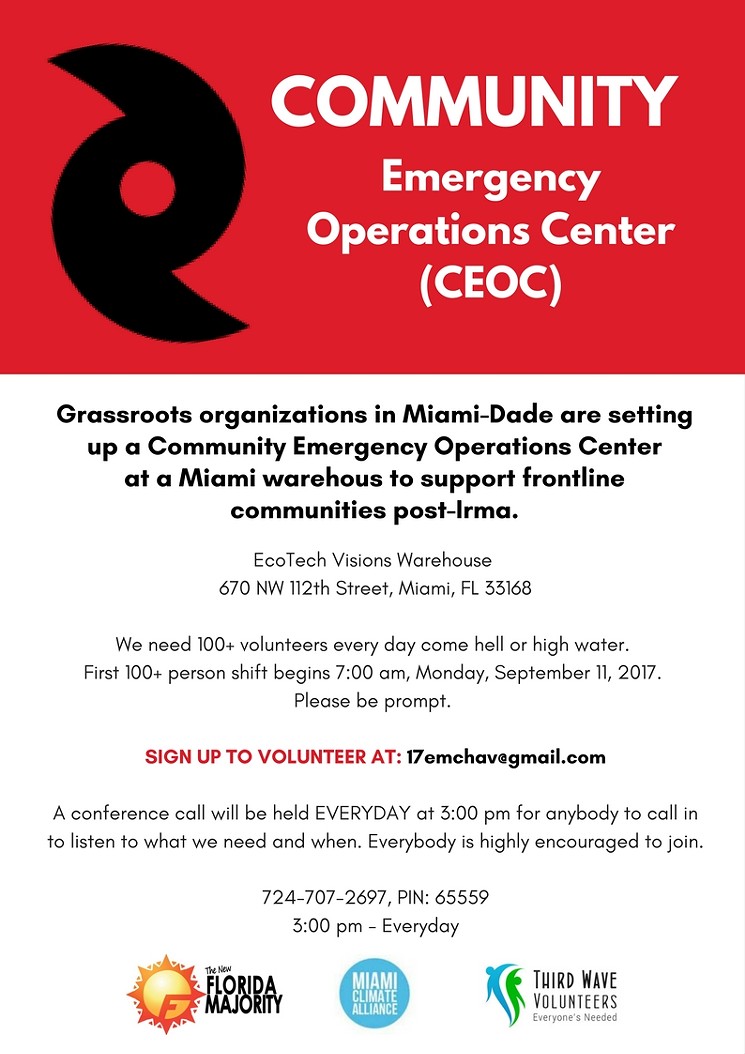 Courtesy of Third Wave Volunteers
KEEP MIAMI NEW TIMES FREE... Since we started Miami New Times, it has been defined as the free, independent voice of Miami, and we'd like to keep it that way. With local media under siege, it's more important than ever for us to rally support behind funding our local journalism. You can help by participating in our "I Support" program, allowing us to keep offering readers access to our incisive coverage of local news, food and culture with no paywalls.
Make a one-time donation today for as little as $1.