Has Art Basel Been Good for Miami? 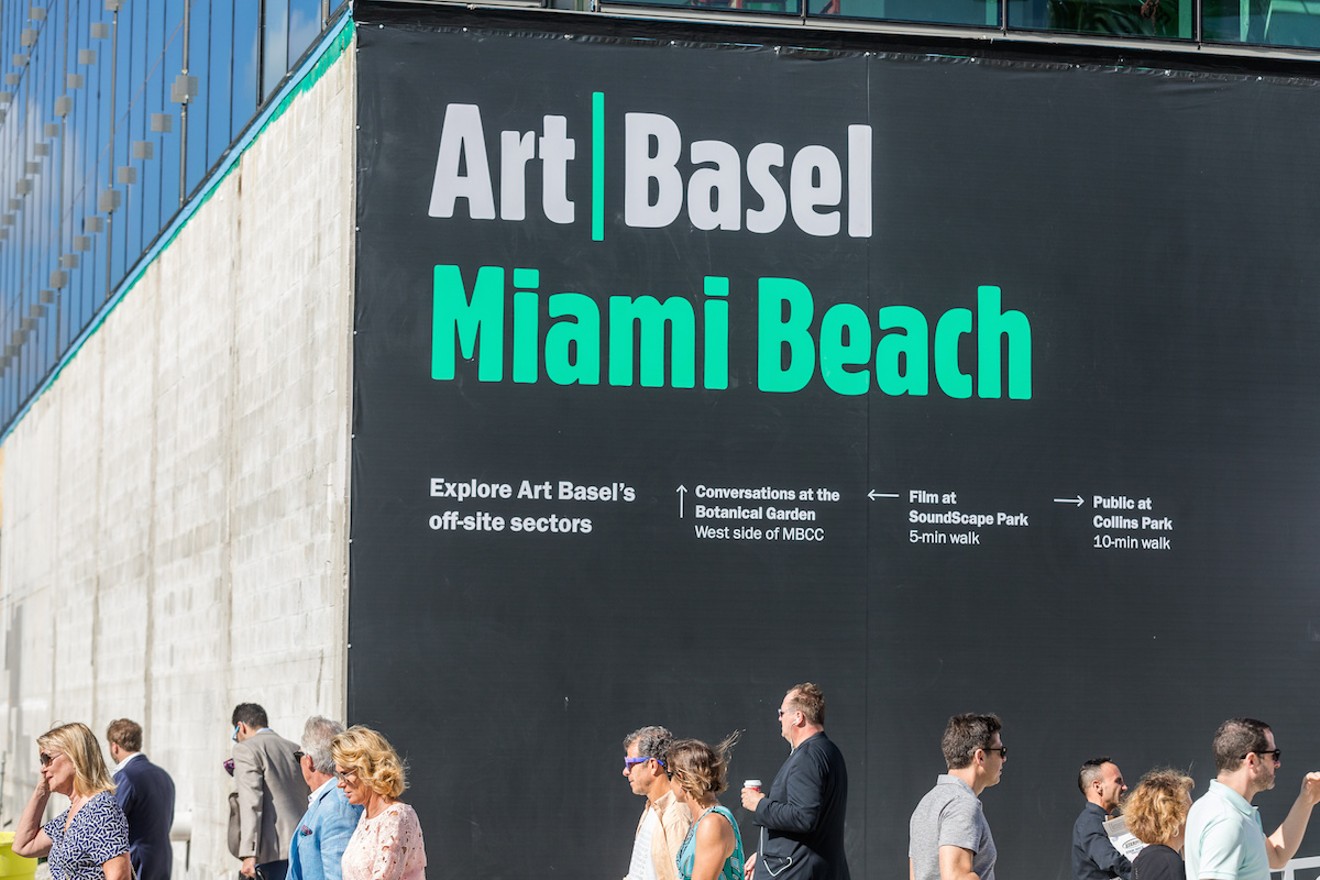 © Art Basel
Art Basel is back. The bad traffic and free wine, the star-studded afterparties and weird warehouse gettys, the artwork that's stunning and stimulating or provocative or incomprehensible or simply bullshit — all of it will make its annual landfall in South Florida this week. The Swiss are coming, and they’re bringing all their friends. For better or worse, Miami is about to become the pulsating nerve center of the art universe.

Art Basel ain’t for everybody, but everybody in Miami does have an opinion about it. Love it or hate it, the spectacle of Miami Art Week has transformed this town since Basel’s arrival 17 years ago. But has that transformation helped or hurt Miami? Has Basel been good to you?

Contrary to what you might have heard, this city had an arts scene before Art Basel. There were collectors such as Brook Dorsch and Martin Margulies and Rosa and Carlos de la Cruz. There were institutions such as the Museum of Contemporary Art (MOCA) and Miami Art Museum, known today as Pérez Art Museum Miami. Major artists brought impressive works to town, including Christo and Jeanne-Claude’s Surrounded Islands in 1983 and Isamu Noguchi’s redesign of Bayfront Park in 1986, including several sculptural works by the artist. Even before Art Basel launched its Miami Beach fair, the city seemed like it was en route to becoming a major player in the global art scene.

“Miami was always going to blow up eventually,” explains Esther Park, an event programmer and longtime fixture on the Miami art scene. “It’s just that Basel propelled it.”

Park arrived in Miami in 2003 on a short-term assignment and never left. She built a career on marrying contemporary art with events that feel younger and more exciting than what you might expect to find in a museum. She's played a major role in the development of this city’s cultural landscape, working with MOCA, the Adrienne Arsht Center, YoungArts, and now ArtCenter/South Florida, where she's vice president of programming.

In Park’s eyes, Basel was the gasoline to Miami’s fire. And as far as she’s concerned, the fire isn’t going to die down anytime soon.

“The thing is, once you become famous, you cannot become un-famous,” she explains. “I think that’s what’s happened with Miami. Miami [had] always been [known for] Scarface and Miami Vice — it always had a vibe.” After Basel, she says, “You have this 1 percent art world, supersnobby, bourgie art world, saying ‘OK, I can dig Miami.’ And then once they condone it, you get all the industry types who come. ”

The scene at Art Basel Miami Beach in 2007.
Jacek Gancarz
In the 2003 New York Times article “Miami Puts On an Arty Party,” style contributor Guy Trebay described “the growing sense that Miami is now bidding to become an art capital in its own right.” The story quotes Donald Rubell, one of the Magic City's most famed art collectors, saying, “Miami is not just bikinis and muscles anymore.”

Trebay also mentions a number of celebrities, such as renowned chef Eric Ripert and Oscar-winning filmmaker Kathryn Bigelow, whose star statuses have aged well, along with others such as Lenny Kravitz. Remember 2003?

Still, many artists who were active and getting their start in Miami in those days remember thinking the city had a long way to go before it was all grown up. Alexander Robbie creates light, colorful paintings, often rendered with a feeling of movement in pastel hues. It’s a palette that might make you reminisce about a Miami childhood in the ‘90s. Robbie grew up in Miami with artistic ambitions, developing his craft at Design and Architecture Senior High (DASH) in the Design District during the early years of Art Basel. He also worked at the Craig Robins Art Collection and Design Miami before eventually moving to Switzerland in 2011. Despite the art fair’s prestige, he recalls thinking Miami’s cultural cachet wasn’t all that substantial during the earlier years of Art Basel.

“I remembered [the scene] feeling small and cliquish,” Robbie writes from his home in Switzerland. “I was involved but somehow didn’t feel totally cool enough to be proactive. It also didn’t seem very serious or respected, and very commercial but in a tacky way, like, ‘Here’s something nice to go with your couch.’ There was some cool stuff happening, but rarely. It was small and insular, a shallow market primarily.”

Artist Alexander Robbie moved from Miami to Basel, Switzerland, in 2011.
Alexander Robbie
After three years of traveling to Switzerland with Design Miami, Robbie moved to the city of Basel, home to some of the most respected art institutions in the world, including the original Art Basel. There he found a sense of how the art fair’s presence in Miami had changed global perceptions of the city. The fair brings influence peddlers and big names who have reach and clout — and, of course, millions upon millions of dollars. Naturally, that has made Miami more important on the world stage. But Robbie says that notoriety comes with a caveat.

“[Basel has] elevated the city on the world scene. I would say it’s made Miami more important — not really serious, but important.”

What does “serious” mean in the realms of art and culture? Is it valuing a city’s long-term legacy over the short-term success of instant gratification, quick wins, and big sales? Does it mean copying other cities with more established artistic pedigrees, the Basels and New Yorks and Parises of the world and their so-called high culture? Or is it a matter of shifting the perspective of that world to include Miami and the unique work created here? The answers to those questions vary as much as locals’ opinions of Art Basel itself. But even if you don’t agree with Robbie’s assertion that Miami is not yet a serious city, it is difficult to argue with the fact that the art fair has made this city more important.

That newfound importance attracted collectors from all over the world to look to Miami as a place to buy art. Even though the fair primarily shows art shipped in from other art hubs across the globe — this year marks the first time in more than ten years that two Miami galleries are included among the 200 art spaces in the fair's main Galleries sector — the reality of being an artist in Miami has fundamentally changed during the Basel era.

Miami artist Jose Garza.
Alexandra Sahatdijan
Jose Garza is the kind of true local who can only have been made in Miami. He is a street artist who helped found the graffiti crew Get Up Kids, better known as GUK; a musician whose performances almost always leave him hoarse and half-naked; and, most recently, a craftsman who has turned his energies toward fabricating all sorts of pieces for events such as Burning Man and Art Basel. This jack-of-all-trades has been plugged into the Miami arts scene all of his adult life — and he says the past decade alone has seen incredible growth.

“If it wasn’t for Basel, artists wouldn’t be able to have gigs year-round,” Garza says. “It wasn’t really like that back in the day. I started volunteering in 2010 or 2009, like right after high school, and back then, to be a full-time artist in Miami, bro, you were scraping.”

But in recent years, Garza says, local artists can find work all year — and not just artists whose pieces can be found in contemporary art galleries. “Even graffiti writers — Abstrk, SSK, all these dudes — they get shit year-round now. August to November, you’re booked — that’s in a pocket.” For the rest of the year, he says, artists use the notoriety and cachet of Art Basel, as well as connections they’ve made during Miami Art Week, to book residencies and exhibits elsewhere. He points to a recent Vienna residency for Miami artist Magnus Sodamin and a Detroit exhibit for local muralist Hoxxoh as examples. “Definitely,” he says, “Basel has been a catalyst for a lot of people’s careers.”