Trump Pops Up as Pac-Man in New Wynwood Mural 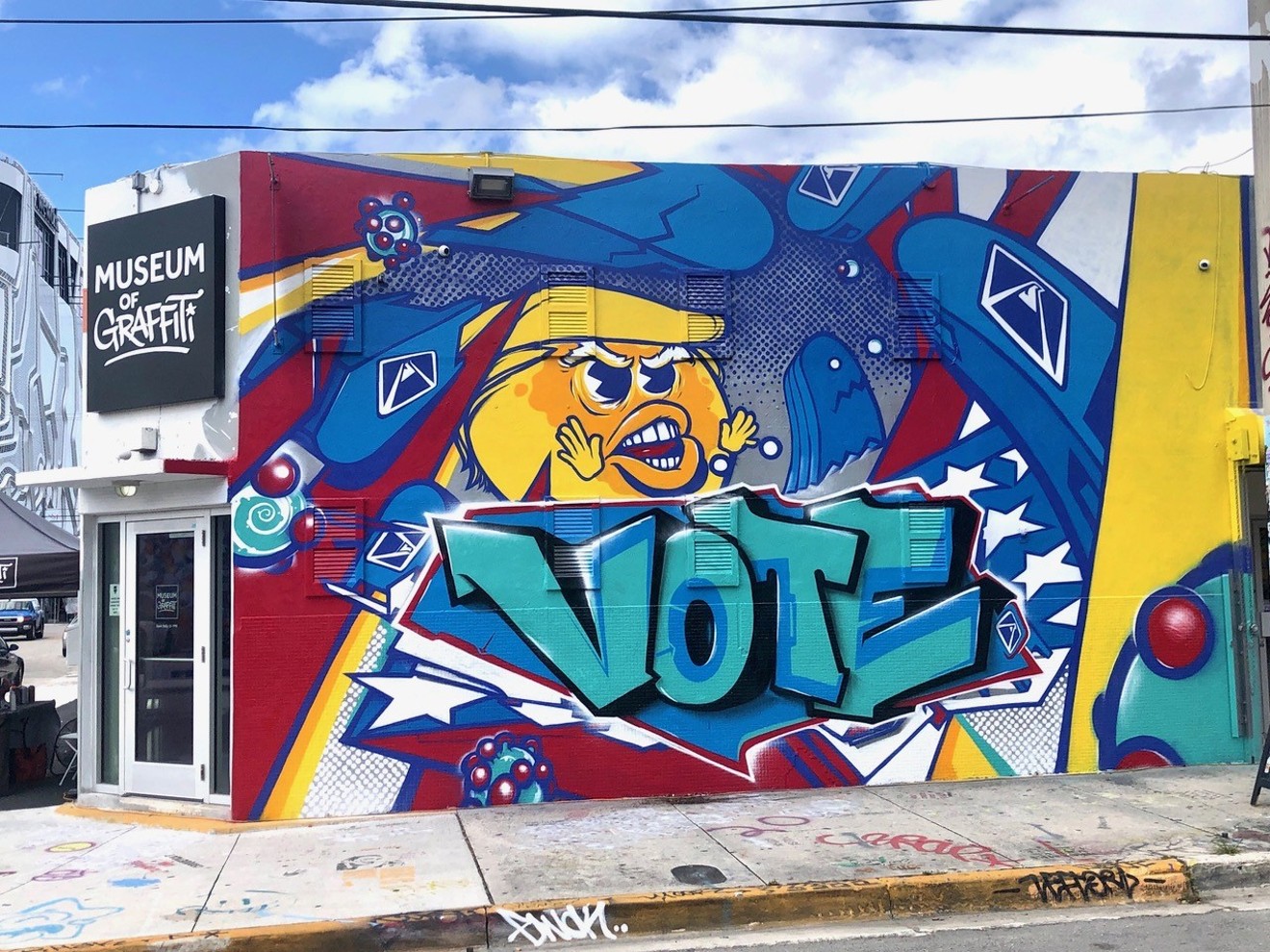 Ewok One's Game Over can be found outside the Museum of Graffiti in Wynwood. Photo by Fabien Castanier
There's a new mural outside the Museum of Graffiti in Wynwood, and it features a caricature of President Donald Trump. Game Over, painted by New York-based artist Ewok One, depicts the rotund, orange-tinged president as Pac-Man and shows him surrounded by U.S. Mail collection boxes that recall the arcade game's "energized" blue ghosts.

The artwork — which includes the word "vote" in graffiti lettering — references voter suppression and Trump’s frequent attempts to delegitimize mail-in voting. And to hammer home the nation's dismal state of affairs, the coronavirus symbol makes an appearance.

“With this new era of choking out USPS funding, I began to look at voter mailing as one of Trump’s biggest fears standing in the way of his possible re-election,” Ewok One tells New Times. “Symbolically, Trump’s persona and ego is formed around his image and image of perceived masculinity via being orangey-bronzed and healthy. So it was fitting to imagine him as Pac-Man eating and destroying anything in his path [and] simultaneously running from ghosts or his fears, which to me also looked like USPS mailboxes.

“The art builds energy and momentum with its circular design layout, and if you add in another element of the coronavirus, you have this visually delivering artwork with a somewhat hidden message.”

Known for his cartoony caricature style, Ewok One created Game Over in collaboration with the Museum of Graffiti, which first opened its doors to the public last December. The mural was meant to coincide with the presidential debate that had been scheduled for Thursday at the Adrienne Arsht Center downtown, but the debate was canceled after Trump came down with the coronavirus and then refused to participate in a virtual format.

Trump has long been a target of Ewok One, who is protective of his real identity, in part to let his work speak for itself. Ewok One has been selling original illustrations of Trump and his embarrassing antics for years.

“Humor used as the tool to expose what we’re all seeing daily," Ewok One says. "Since facts, science and debate are useless to people who believe in a cult — humor is a great vehicle to deliver a message.”

For street-art aficionados, the Museum of Graffiti offers a free downloadable poster of Game Over on its website. A limited edition of 45 signed screenprints ($200) are available via the museum's online shop.

Game Over isn't the first anti-Trump mural to appear in Wynwood. In 2016, the Bushwick Collective adorned a warehouse with Trump as the Joker holding a knife to the Statue of Liberty. After Trump unexpectedly won the presidential election, he was removed from that mural and replaced with a gorilla.

Museum of Graffiti. 299 NW 25th St., Miami; 786-580-4678; museumofgraffiti.com.
KEEP MIAMI NEW TIMES FREE... Since we started Miami New Times, it has been defined as the free, independent voice of Miami, and we'd like to keep it that way. With local media under siege, it's more important than ever for us to rally support behind funding our local journalism. You can help by participating in our "I Support" program, allowing us to keep offering readers access to our incisive coverage of local news, food and culture with no paywalls.
Make a one-time donation today for as little as $1.