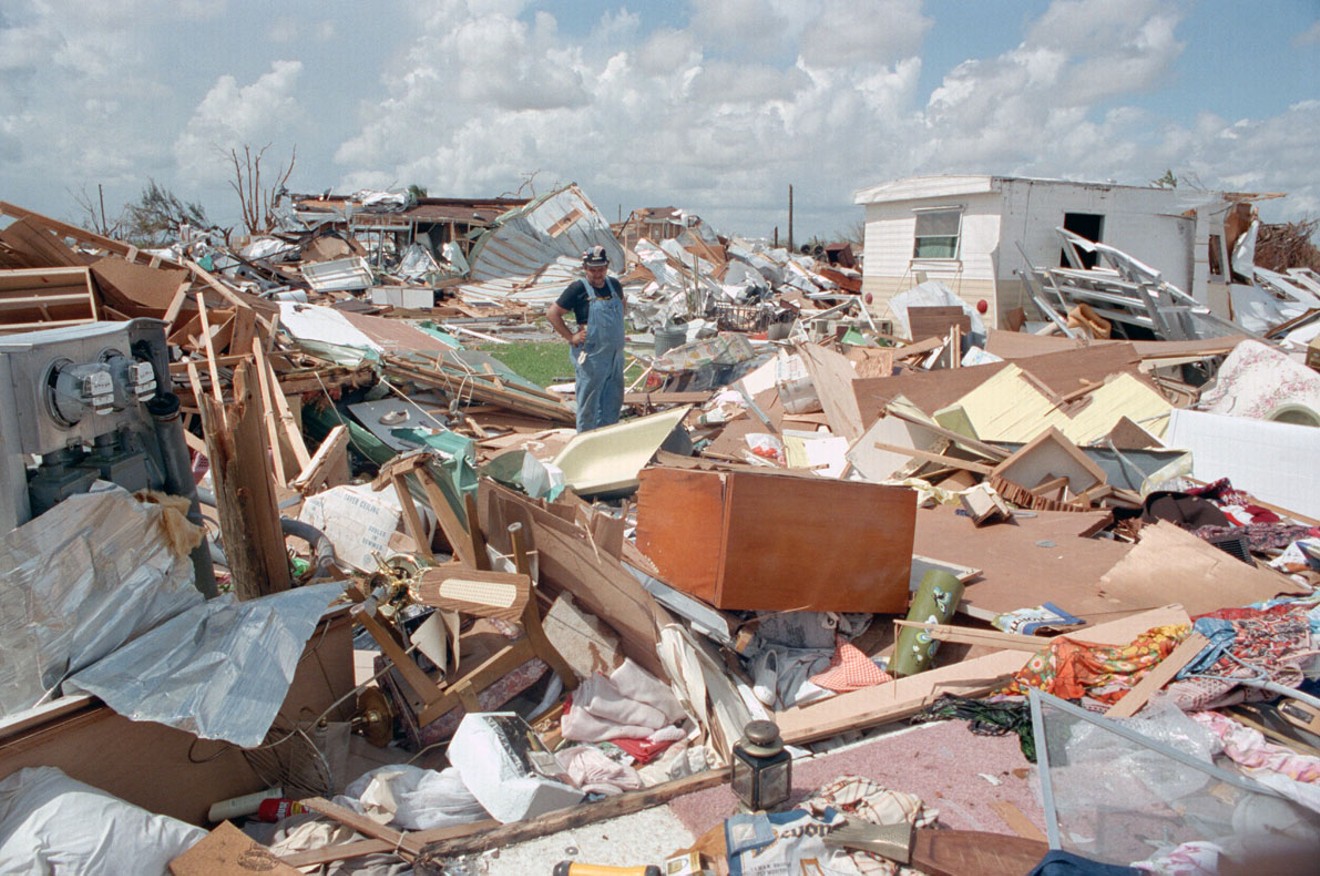 In September 1992, days after Hurricane Andrew struck, a man stares at the remains of his home. Take a look back at more of Andrew's devastation from 25 years ago. Courtesy of HistoryMiami Museum
Where were you during Andrew?

It's a question many Miamians have been asking one another since 1992, when the most destructive hurricane to hit the United States roared through Miami-Dade in the early-morning hours of Sunday, August 24. During the long night, many huddled in their homes and listened to meteorologist Bryan Norcross on the radio.

"We're talking about South Miami, Kendall down, including Homestead and Florida City," Norcross intoned during his famous 23-hour broadcast throughout the hurricane. "That's going to be the most key part, the most destructive part of the storm."

"The exhibit doesn’t just show the storm’s damage. It shows how South Floridians rallied together to rebuild a stronger Miami-Dade County."

The numbers tell only part of the story. The storm disrupted thousands of lives in myriad ways, both during that fateful weekend and in the months and years that followed. Hurricane Andrew was a deeply emotional turning point for many who bore the brunt of the storm and its aftermath.

Now, as the anniversary of Andrew approaches, Norcross has helped create "Hurricane Andrew: 25 Years Later," an exhibit at HistoryMiami that recounts the storm's devastation in the short and long term. He says he's also dedicated to helping South Florida survive the next big one.
Hurricane Betsy, a 1965 storm, was the last major 'cane to plow through South Florida before Andrew hit 27 years later, catching many complacent Miami-Dade residents off-guard. People scrambled through last-minute storm preparations Saturday to stock up on jugs of water, canned food, and batteries. Cars cued up around blocks at gas stations. The sound of hammering could be heard as homeowners boarded up windows with plywood. Miami was buzzing moments before lockdown, with no clue about the chaos that would follow.

Norcross had almost seen the mess coming. Almost. Twenty-five years ago, weather and emergency management technologies weren’t as sophisticated as they are today. He and WTVJ had prepared the best they could. In 1990, the station hired Norcross, who set up an on-camera working weather office he called the Storm Center to provide more information to the public in a faster, more immediate way.

“Generally when people prepare for a disaster, they don’t have one,” he notes. “In this case, we had a hellacious hurricane. But we were able to use every technology we put in place.”

The casualties would’ve been even worse without the Storm Center's backup plan. Norcross ended up broadcasting from a bunker at the downtown Miami TV station, which linked to the radio station Y100 in Broward and the West Palm Beach radar system after strong winds crippled other systems.

“Around 5:30 a.m., we got some calls from people in West Kendall,” he recalls. “One was a young girl named Debbie. Part of [her] roof came off. She was huddled in the room and figuring out what to do. I could correlate what people were describing with what I saw on the radar. I knew they had a good way to go and that winds would blow till about 7 a.m.”

Norcross believes that the communication before, during, and after the storm, though primitive by today’s standards, helped save lives. “People paid attention and followed suggestions. They hid under mattresses.”

During his marathon broadcast, Norcross’ voice became a guiding beacon in the tempest. He helped comfort fearful Miamians during the harrowing night.

"I've heard many times how calming my voice was," he says. "The philosophy I had adopted was about being direct, straightforward, and not overstating anything. But I was overusing my voice. The timbre of it changed through the hurricane, and by the ultra-intense part in the middle of the night, it was getting pretty rough and had that quality to it that sounded extraordinarily calm.”

September 18, 1992, Armando Perez and his son Lionel try to salvage belongings from a demolished trailer.
Courtesy of HistoryMiami Museum
Jorge Zamanillo, director of HistoryMiami Museum, was in Little Havana the night Andrew hit. When the weather cleared, he traveled to South Dade and witnessed the ravages of the fierce storm. In spite of the widespread sense of shock, he says, Hurricane Andrew proved Miami-Dade could be a resilient community.

“Landmarks blew away. It was very disorienting,” Zamanillo recalls. “Lives were changed, people were at a loss, but the community came together like never before. The exhibit doesn’t just show the storm’s damage. It shows how South Floridians rallied together to rebuild a stronger Miami-Dade County.”

Zamanillo hopes the exhibit will commemorate a pivotal moment in Miami’s history through shared narratives rather than shore up traumatic memories. "Hurricane Andrew: 25 Years Later" offers letters and memorabilia on loan from Norcross, first-person storytelling captured on video by documentary filmmaker Gaspar Gonzalez, historical footage, artifacts, and other items.

“It’s more about the history, not the science,” Zamanillo says. “It’s about different people in our communities with a common thread in an event that really transformed South Florida.”

The question “Where were you during Andrew?” invariably begs another: What happens when another Andrew hits?

Norcross, who recently published an account of his experiences in My Hurricane Andrew Story, says his book addresses the past as well as the "Andrew of the future": a nightmare scenario in which a similar storm hits the urban congestion and high-rise developments north of Andrew's ground zero in Homestead.

"The reality is that if Andrew had come farther north in 1992, the scale of human disaster would have been greater," he says. "If you translate that to modern Miami, you're talking about homelessness in the millions and damages in the billions of dollars."

Norcross warns that South Floridians must consider not only remaining safe in a dwelling but also the possibility of becoming stranded there and dealing with survival during the aftermath. "New buildings will withstand storms in theory," he notes, "but if you come out of the storm with no power, water, and communications in a disaster zone, you can't function, and that will likely be a huge public health and safety problem."

Developers touting hurricane-proof impact windows, for example, might lull buyers into a false sense of security. Windows and doors won’t be safe during a storm if they’re not properly installed. For that reason, Norcross' safety instructions remain the same as they were in 1992. “Stay away from windows,” he warns. “Even though odds in modern buildings are in your favor, you’re betting your life that whoever built it installed the windows correctly and did what they were supposed to do.”

There’s another problem modern Miami will face in spite of improved utility infrastructures: In 1992, Norcross’ voice reached people through the airwaves on transistor radio, and people called loved ones on analog telephone lines. Today most people use cell phones, and few own portable radios. Those outdated technologies are the most useful ones during a power outage.

“It’s a monstrous safety problem. The bottom line is that during and after a hurricane, internet and mobile, digital TV, anything that depends on electricity and cable, will be less robust,” he says. “Imagine if you didn’t have a radio,” he says. “Amplify the fear factor by an untold amount.”

September 1992: Sportfishing boats were among the debris of destroyed houses.
Courtesy of HistoryMiami Museum
As Miami enters hurricane season in 2017, Norcross, who is now senior hurricane specialist for the Weather Channel, says weathering a storm boils down to individual responsibility. "The decisions you make in the days and hours immediately before a hurricane can change your life, from horrendous to seriously inconvenient," he notes.

But a hurricane-preparedness mindset is also a community effort. “There are huge lessons from Hurricane Andrew," he adds. "Everybody — people, politicians, businesses, anyone who lives in this part of Florida — should imagine it hitting today and think about what you have to do to live successfully where these things happen. The lessons learned since Andrew can help today's Miami come through the next great storm as a city where people can vacation, live, and work without years of pain, upheaval, and loss."

"Hurricane Andrew: 25 Years Later"
Thursday, June 1, through January 14, 2018, at HistoryMiami Museum, 101 W. Flagler St., Miami. Hours are Monday through Saturday from 10 a.m. to 5 p.m. and Sunday from noon to 5 p.m. Admission costs $10 for adults, $5 for children aged 6 to 12, and $8 for students with valid ID; members and children under 6 get in free. Bryan Norcross will speak at a special reception Thursday, June 1, at 6 p.m. Tickets are free for HistoryMiami members and cost $15 for nonmembers.