The 12 Best Things to Do in Miami This Weekend 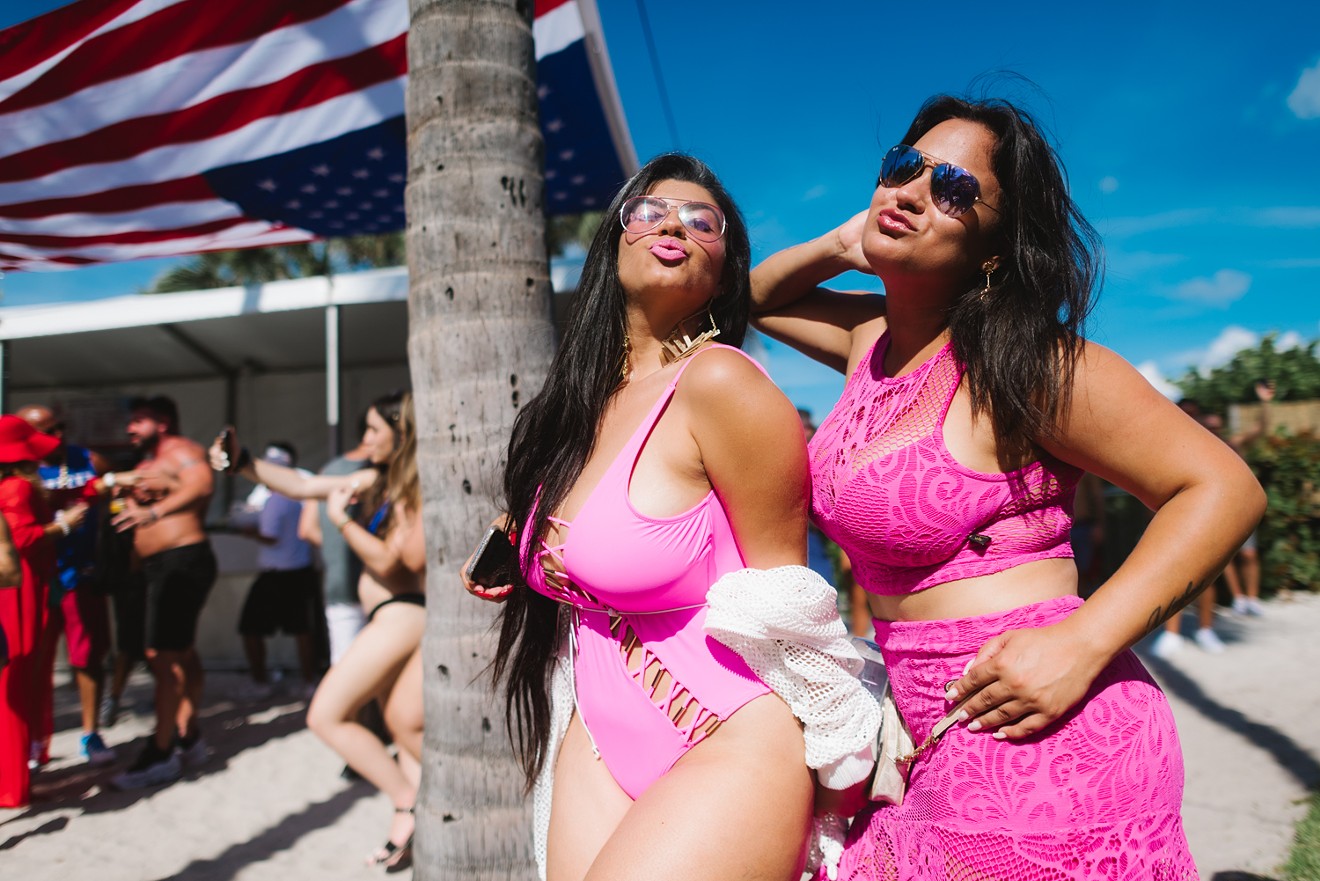 Photo by Karli Evans
Sorry, readers — there's no long holiday weekend in store for you like there was this time last week. But don't let that get you down. The coming three days are still packed with parties, performances, and you've-gotta-be-there events, from Overtown's annual arts and music fest to a celebration of mangoes at Fairchild.

Here are the best things to do in Miami this weekend.

John Leguizamo
Photo by Matthew Murphy
He's been in everything from Die Hard 2 and Righteous Kill to Ice Age. Now he has a Netflix comedy special, Latin History for Morons, that is taking the world by storm. John Leguizamo brings his latest jokes and priceless take on Latino history to Miami for three shows. In addition to being hilarious, Leguizamo's show won a Tony Award after a successful stint at the Public Theater in NYC. 8 p.m. Friday, July 12, and Saturday, July 13, as well as 3 p.m. Sunday, July 14, at Adrienne Arsht Center, 1300 Biscayne Blvd., Miami; arshtcenter.org. Tickets cost $49 to $125.
Last year's Black Market Fest was so damn awesome it's back for another whirl. Black Market Fest 2 is a two-day affair this year, going down Friday and Saturday at Las Rosas. In addition to hip vendors galore, this year's event boasts quite the curated musical lineup. Friday, enjoy sets from the likes of Orlando's the Grizzly Atoms, Douse (Philadelphia), and locals the Hoy Polloy. Sunday, jam to Nashville's AAGAAZtheband, Baby FuzZ out of Brooklyn, and Baltimore's Thrillkiller. 8 p.m. Friday, July 12, and 7 p.m. Saturday, July 13, at Las Rosas, 2898 NW Seventh Ave., Miami; eventbrite.com. Admission is free.

Ready to move your ass all night? The Ground is your place. For Bound x Internet Friends, DJs and artsy peeps are coming together to create quite the musical and visual spectacle. DJs slated to perform include curator and Brooklynite Katie Rex, Discosexo, Zei, and Bunny. The show is for party people 18 and over. 11 p.m. Friday, July 12, at the Ground, 34 NE 11th St., Miami; eventbrite.com. Admission is free.

Martyn Jenkins, lead singer of Absolute Queen, performs with his band.
Absolute Queen
OK, you can't time-travel to the '80s and see Freddy Mercury rockin' out with Queen. But you can transport yourself to Revolution Live to see Absolute Queen — the Tribute Experience. This show re-creates an early-'80s Queen concert, delivering the classic jams, costume changes, and infectious energy for which the iconic band is known. From "Bohemian Rhapsody" to "We Will Rock You," get ready for a throwback. 7 p.m. Friday, July 12, at Revolution Live, 100 SW Third Ave., Fort Lauderdale; jointherevolution.net. Tickets cost $15.

The Overtown Music & Arts Festival has attracted some seriously big-time performers in years past: Ginuwine, Estelle, Vivian Green, Monica, and CeeLo Green, to name a few. This year's lineup keeps the momentum going with Canadian-bred Melanie Fiona, "Let's Get Married" R&B group Jagged Edge, Ne-Yo, and Mario headlining. In addition to stellar tunes, there will be arts, crafts, and cuisine vendors onsite with cultural awesomeness available for purchase. 11 a.m. to 8 p.m. Saturday, July 13, at NW Second and Third Avenues between NW Eighth and Tenth Streets, Miami; overtownmusicartsfestival.com. Admission is free. There's a place called Vegandale in Toronto. It's a one-block utopia composed of vegan eateries, shops, and other goodness. Now Vegandale is hitting the road, bringing the Vegandale Miami festival to town Saturday. Among the yummy vegan vendors you can check out are Snackrilege (Portland), Imperative (Toronto), and Hempferu (Austin). In addition to stuffing your face with guilt-free goodies, you'll find tunes, games, and giveaways throughout the day. 11 a.m. to 7 p.m. Saturday, July 13, at Virginia Key Beach Park, 4020 Virginia Beach Dr., Miami; vegandalefest.com. Tickets cost $10.

It's time for a weed-ucation, y'all. Wynwood Factory will be morphed into marijuana-culture heaven Saturday for the sixth-annual 710 Dab Day. Sponsored by the peeps at Dab Day Productions, this shindig features a vendor village with more than 20 industry brands, live glassblowing, live art, and tunes as well as a fully stocked bar. Pro tip: VIP ticket options are available with comfy seats for when you need a nap. 4 to 10 p.m. Saturday, July 13, at Wynwood Factory, 55 NE 24th St., Miami; eventbrite.com. Admission costs $30 to $175.

The title His Double Life alone should be enough to draw in drama lovers. But there's so much more to this stage production. At its core, the Nial Martin piece explores a man's relationship with his father as well as a deeply held secret the young man has held from his wife. With a blend of comedy and dramatics, this one touches on sexuality, alcoholism, forgiveness, and more. 7 p.m. Saturday, July 13, at Julius Littman Performing Arts Theater, 17011 NE 19th Ave., North Miami Beach; eventbrite.com. Tickets cost $30 to $60.

New Found Glory
Ian Witlen
Roll out the red carpet, because some hometown heroes are ready to rock. Coral Springs-bred New Found Glory headlines Revolution Live Sunday. If you're stuck on the band's classics like "My Friends Over You," its 2017 LP, Makes Me Sick, is worth hearing. Joining NFG for the show are fellow rockers Real Friends, Early November, and Doll Skin. 6 p.m. Sunday, July 14, at Revolution Live, 100 SW Third Ave., Fort Lauderdale; jointherevolution.net. Tickets cost $28.

OMFG, it's NKOTB time. New Kids on the Block will make everyone scream at BB&T Center this Sunday. For its Mixtape Tour, the timeless boy band is bringing along some other timeless artists. Opening for the fivesome in Sunrise are Salt-N-Pepa, Naughty by Nature, Tiffany, and Debbie Gibson. Talk about a nostalgia overload. 6:30 p.m. Sunday, July 14, at BB&T Center, 1 Panther Pkwy., Sunrise; thebbtcenter.com. Tickets cost $45.25 to $225.

OLA is back. This time, the executive chef is Carlos Castro, and the location is the Gates Hotel South Beach. Joining him is a team of restaurant veterans with a 16-year history of working together since the Miami Beach eatery's inception. The restaurant, which debuted in 2003 at the Sanctuary Hotel, was originally helmed by Douglas Rodriguez, a member of Miami’s famed “Mango Gang” of chefs. OLA, an acronym for "Of Latin America," served guests for more than a decade before damage from Hurricane Irma in 2017 forced a short move to Miami Beach's SoFi neighborhood. Now the restaurant has a permanent home at the Gates. 2360 Collins Ave., Miami Beach; 305-695-9125; olamiami.com. Sunday through Thursday 6:30 to 10 p.m.; Friday and Saturday 6 to 11 p.m.
KEEP MIAMI NEW TIMES FREE... Since we started Miami New Times, it has been defined as the free, independent voice of Miami, and we'd like to keep it that way. With local media under siege, it's more important than ever for us to rally support behind funding our local journalism. You can help by participating in our "I Support" program, allowing us to keep offering readers access to our incisive coverage of local news, food and culture with no paywalls.
Make a one-time donation today for as little as $1.