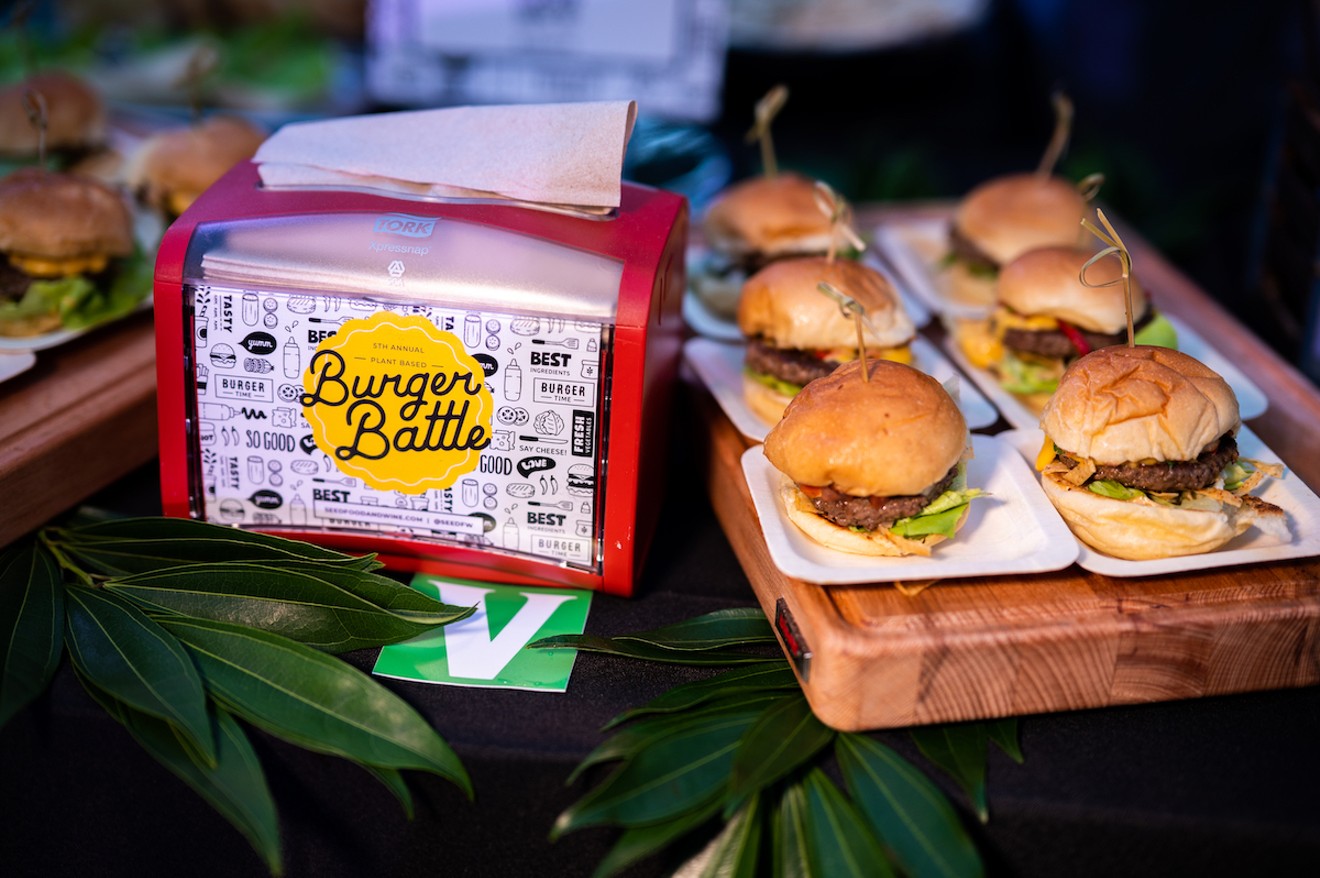 The recently reopened Mayfair House Hotel & Garden hosts Vibe House with Kymå on Monday evening. Hosted by Modern Ōm, the meditation combines mindfulness, exercise, and music to ease tension at the start of the workweek. The silent disco, led by Kymå, a DJ and trauma-informed meditation and breathwork teacher, will take you on a journey kick-started by sound and earthly rhythms. Breathe in good vibes and exhale bad energy while accessing the depths of your inner harmony. 7 to 8:30 p.m. Monday, at the Mayfair House Hotel & Garden, 3000 Florida Ave., Coconut Grove; 305-441-0000; mayfairhousemiami.com. Donations are encouraged via eventbrite.com. Sophia Medina

The arena that won't be known as FTX much longer heats up on Tuesday as the Miami Heat go head-to-head with their Eastern Conference rival Boston Celtics. At this writing, the Celts are perched atop the conference standings, with the Heat mired in midpack. Nikola Jović is out as he recovers from finger surgery and Tyler Herro and Kyle Lowry are day-to-day. Can the home team overcome the injury bug? Score a ticket or three and witness for yourself on Tuesday. 7:30 p.m. Tuesday, at Miami-Dade Arena, 601 Biscayne Blvd., Miami; 786-777-1000; miamidadearena.com. Tickets cost $30 to $575 via ticketmaster.com. Ashley-Anna Aboreden

On Wednesday, you can experience a six-course tasting menu prepared by two of South Florida's most talented chefs, as the Gibson Room hosts a Franco Stanzione and Michael Beltran Collab Dinner. Stanzione learned to make pizza in Italy and returned to Miami to share his knowledge (and food) at Stanzione 87, while Beltran's restaurant, Ariete, recently earned a Michelin star. The two will come together for the first time to cook an Italian-centered menu that includes timpano, lamb bistecca alla fiorentina, and ravioli. 6 to 9:30 p.m. Wednesday, at the Gibson Room, 2224 SW 22nd St., Miami; 305-570-4311; thegibsonroommiami.com. Tickets cost $110 via eventbrite.com. Ashley-Anna Aboreden

True Story is a local weekly event at which storytellers, artists, musicians, comedians, and guests come together to hear revealing stories. There are only two rules: It must be true, and it must be about you. Other recommendations include writing down the first and last line of your story, so you know where it ends. Also, think about a hook — keeping your audience in suspense seldom fails to wow. The event takes place every Wednesday at Ironside in Little River. 7 to 10 p.m. Wednesday, at Ironside, 7610 NE Fourth Ct., Miami; instagram.com/truestorymiami. Admission is free with RSVP via eventbrite.com. Ashley-Anna Aboreden 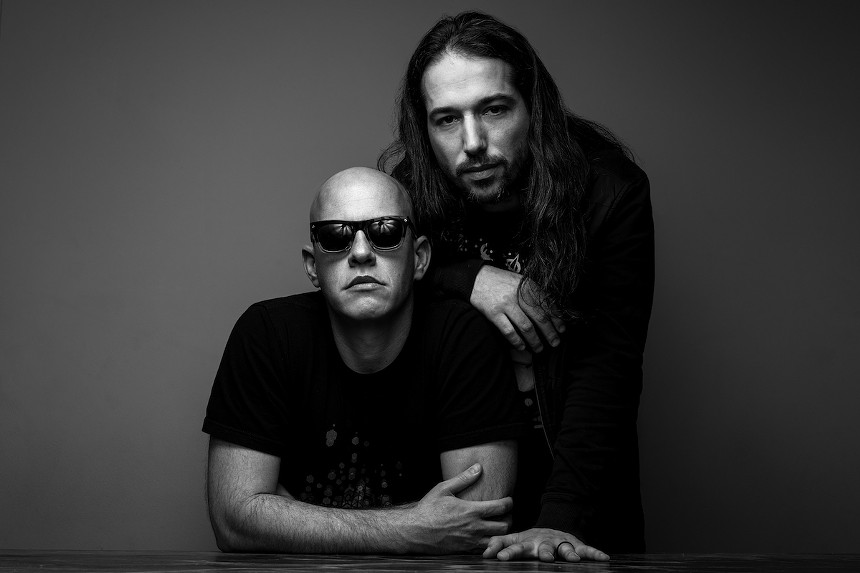 On Thursday, Seed Food & Wine Festival kicks off its celebration of plant-based cuisine with four days of events. From cooking demonstrations and special dinners to wine, craft beer, and spirit tastings, the festivities will deliver an experience any vegan or omnivore will enjoy. It all starts with the seventh-annual Burger Battle at Jungle Plaza in the Design District. Judges will vote for the best bite, and the winner will be crowned Best Plant-Based Burger in America. Competitors include Plant Mafia, Stalk and Spade, Vegan Perrology, Root to Rise Kitchen, and Dope Vegan. 7 to 10 p.m. Thursday, at Jungle Plaza, 3801 NE First Ave., Miami; seedfoodandwine.com. Tickets cost $60 to $85 via eventbrite.com. Sophia Medina

Israeli psytrance duo Infected Mushroom take over the decks at Daer for a night of heart-pounding electronic music. Since forming IM in 1996, Erez Eisen and Amit Duvdevani have performed at renowned festivals, including Ultra Music Festival, Coachella, and Burning Man. The pair recently released IM25 via Monstercat to celebrate the band's 25th anniversary and are in the midst of a world tour that sees them perform a hybrid DJ set and live performance — though Infected Mushroom's South Florida appearance will be a DJ set only. 10 p.m. Thursday, at Daer Nightclub, 1 Luck St., Hollywood; 954-779-4750; hardrocknightlife.com. Tickets cost $30 via tixr.com. Sophia Medina

On Friday, legendary reggae band the Skatalites hit the stage at the Ground. Founded in 1964, the band played a key role in reggae's development and rise in popularity around the globe. The intervening decades have seen a constant lineup rotation; the only remaining original member is vocalist Doreen Shaffer. In need of a pre-show Skatalites primer? Search YouTube for "Swing Easy," "Guns of Navarone," and "Exodus." 7 p.m. Friday, at the Ground, 34 NE11th St., Miami; thegroundmiami.com. Tickets cost $35 to $40 via eventbrite.com. Ashley-Anna Aboreden 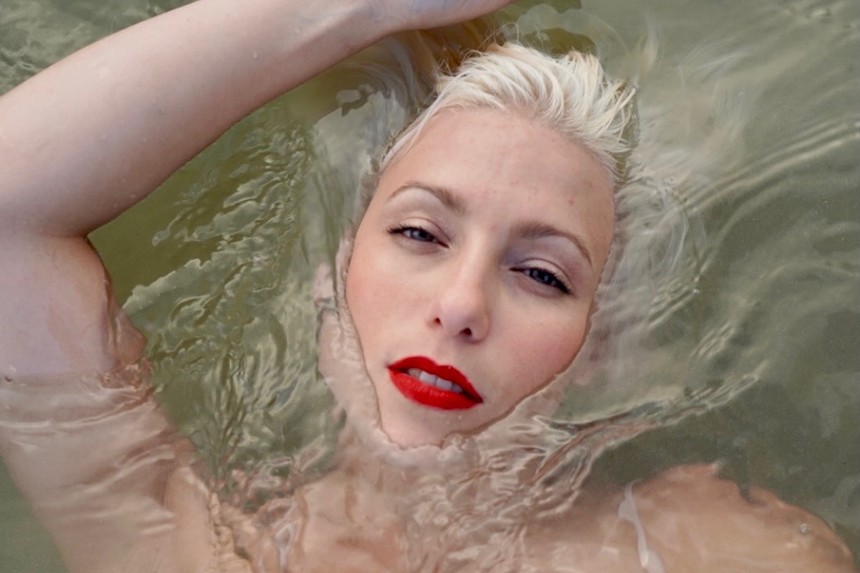 Gretell Barreiro's Marina at Miami-Dade County Auditorium: See Friday
FUNDarte photo
Make room for the Piano Man! Billy Joel stops at Hard Rock Live on Friday to serenade his South Florida fans. Joel is one of the most popular music artists of all time, with more than 160 million records sold over a career that spans more than five decades and accolades that include six Grammy Awards, two RIAA Diamond Awards, and a Tony Award, and he has been inducted into the Songwriters Hall of Fame and the Rock & Roll Hall of Fame. You'd expect nothing less from a guy who produced hits like "Tell Her About It," "Uptown Girl," and "Just The Way You Are." 8 p.m. Friday, at Hard Rock Live, 1 Seminole Way, Hollywood; 954-797-5531; myhrl.com. Tickets cost $105 to $505 via ticketmaster.com. Sophia Medina

On Friday, FUNDarte brings Cuban-born singer and composer Gretell Barreiro to the stage at the Miami-Dade County Auditorium. Barreiro will present her show Marina, based on her recent musical production of the same name. The production sees Gretell's alter ego take you on a trip through personal and cultural obsessions, all taking place in a dream cabaret where time and space are not real. 9 p.m. Friday, at Miami-Dade County Auditorium, 2901 W. Flagler St., Miami; 305-547-5414; fundarte.us. Tickets cost $15 to $20 via ticketmaster.com. Jose D. Duran

Dip your toes into a world of art during the Coral Gables Festival of the Arts on Saturday. Works from more than 200 artists span various media, from canvas to sculpture to metalwork. Art ain't your thing? No worries — celebrations of beer, wine, and spirits; dogs and other pets; chocolate; and kids and family will take place at the same time, in the same place. There's literally something for everybody to enjoy! 10 a.m. to 6 p.m. Saturday and Sunday, at Alhambra Circle between LeJeune Road and Ponce de Leon, Coral Gables. coralgablesartfestival.com. Admission is free with RSVP via eventbrite.com. Sophia Medina 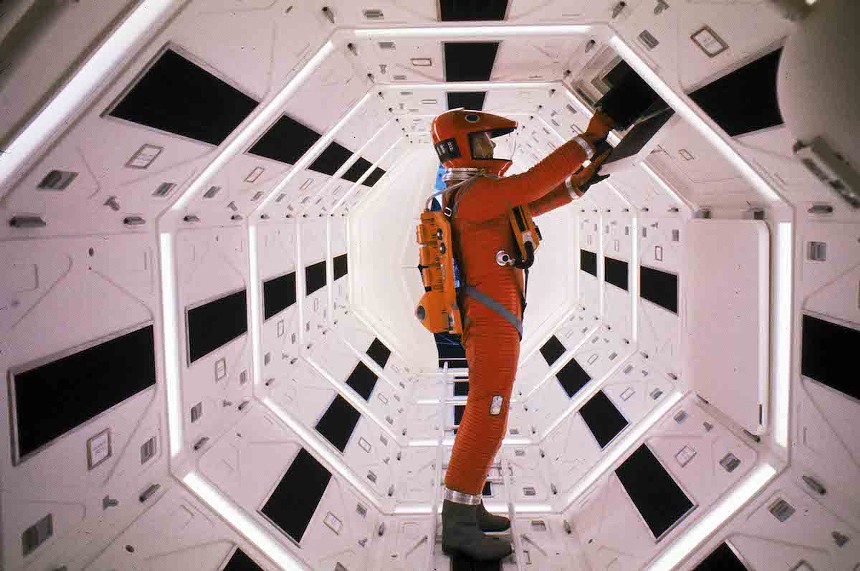 2001: A Space Odyssey at Coral Gables Art Cinema: See Saturday
Warner Bros. Entertainment Inc.
I'm not going to lie to you: I know nothing about horse racing. All I know is that you can bet on a horse and hope to the gods it finishes in the money. Many of those attending Saturday's Pegasus World Cup will likely have the same limited knowledge, but that doesn't matter. Gulfstream Park's big race is more than just horses. With Groot Hospitality in charge of the food and entertainment, fine dining and performances from pop-rockers OneRepublic and Norwegian producer Kygo are a sure thing. 10 a.m. to 6 p.m. Saturday, at Gulfstream Park, 901 S. Federal Hwy., Hallandale Beach; pegasusworldcup.com. Tickets cost $125 to $770. Jose D. Duran

Filmmaking was forever redefined with the 1968 release of Stanley Kubrick's 2001: A Space Odyssey. And now, thanks to Christopher Nolan's restoration, you can see it in theaters once more. On Saturday, Coral Gables Art Cinema hosts a screening as part of its After Hours series. Even if you haven't seen Kubrick's magnum opus, you have most certainly seen its opening scene, in which early man encounters a mysterious obelisk, parodied countless times. Now's your chance to behold the genuine article. 9 p.m. Saturday and noon Sunday, at Coral Gables Art Cinema, 260 Aragon Ave., Coral Gables; 786-472-2249; gablescinema.com. Tickets cost $11.75. Ashley-Anna Aboreden

Steve Lawler makes his way to Do Not Sit on the Furniture on Saturday to present Pendulum, a project that dives deep into the sounds of house with percussion and tribal rhythms. Joining him on the lineup are Insomnia, Nico Moon, and Surreal Flight. Over the past 20 years, Lawler has released music through labels like Hot Creations, Drumcode, Moon Harbour, and his self-founded imprint VIVa Music. Throughout his career, he has held a multitude of residencies, including at Ibiza's iconic Space, where he earned the nickname the King of the Space. 10 p.m. Saturday, at Do Not Sit on the Furniture, 423 16th St., Miami Beach; 510-551-5067; donotsitonthefurniture.com. Tickets cost $25 to $50 via shotgun.live. Sophia Medina 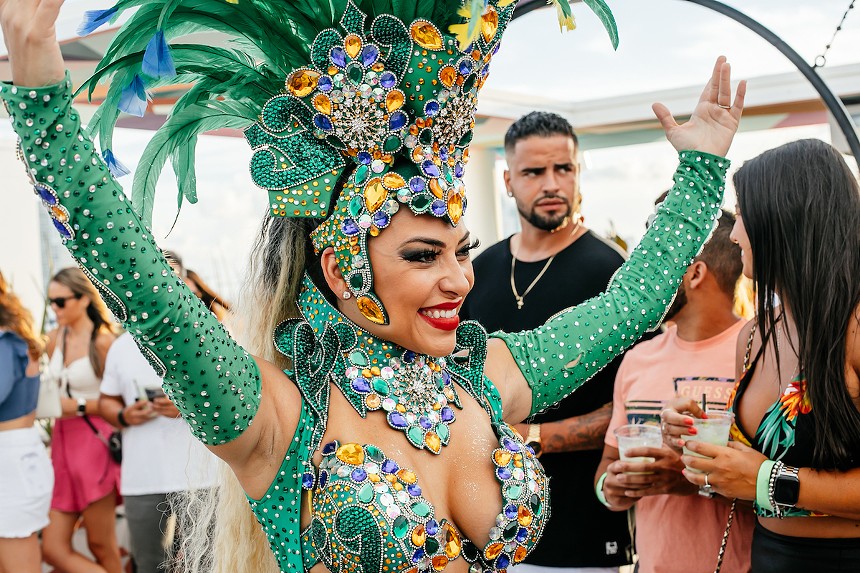 Time to lace up your running shoes! Attracting more than 25,000 runners each year, the Miami Marathon and Half commences at dawn against the downtown skyline. Once the race begins, you're in for 26.2 miles of free-running through the most picturesque areas of the city, including Brickell, South Beach, and Coconut Grove. If running isn't your bag, don't fret — designated cheer zones along the course allow you to support the runners without feeling like your legs are collapsing beneath you and your lungs are on fire. 5 a.m. to 1:30 p.m. Sunday, at 601 Biscayne Blvd., Miami; themiamimarathon.com. Sophia Medina

Enjoy your Sunday whilst sipping a refreshing cocktail, enjoying live music, and admiring the ocean and the Miami Beach skyline. This weekend, Moxy South Beach brings back its Samba Sunday party, featuring Brazilian dancers and sounds from Samba Band Tata do Povo and DJ Lucca Sav. The party takes place atop the Moxy at the Upside Rooftop space, providing a 360-degree panorama. 5 to 11 p.m. Sunday at the Upside Rooftop at Moxy South Beach, 915 Washington Ave., Miami Beach; 305-600-4292; marriot.com. Tickets cost $20 to $30 via eventbrite.com; admission is free for hotel guests. Ashley-Anna Aboreden
KEEP MIAMI NEW TIMES FREE... Since we started Miami New Times, it has been defined as the free, independent voice of Miami, and we'd like to keep it that way. With local media under siege, it's more important than ever for us to rally support behind funding our local journalism. You can help by participating in our "I Support" program, allowing us to keep offering readers access to our incisive coverage of local news, food and culture with no paywalls.
Make a one-time donation today for as little as $1.