'Tis the season to eat, drink, and be merry, and there will be lots of that going on at Hyde Beach at SLS South Beach on Thursday when it hosts the fifth edition of Celebrity Taste. The culinary pop-up event will feature tastings from a lineup of illustrious chefs and drinks from Saam Lounge at the SLS Brickell. Expect offerings from Karla Hoyos of the Bazaar by José Andrés, Edgar Vazquez of Katsuya, Mark Iacono of Lucali, Jose Mendin of Pubbelly, Jason Acoba of Tanuki, and Victor Rosado of Fi'lia. Tickets include both tastings and cocktail creations from the beverage partner stations until 10 p.m., at which point the venue will switch to a cash bar. 8 p.m. Thursday at Hyde Beach, 1701 Collins Ave., Miami Beach; 305-674-170; sbe.com. Tickets cost $75 via tixr.com/groups/hydebeach. Olivia McAuley

With a little help from massive LED screens, projection mapping, and festive music, Bright Lights at Historic Virginia Key Beach Park transports guests to an enchanted Christmas-themed world. From the safety and warmth of their cars, visitors can take in over a mile of audiovisual installations with accompanying sounds broadcast directly to their car stereo. Guest can order food from on-site vendors without setting foot outside their vehicles. 6 to 8 p.m. and 9 to 11 p.m. Friday, Saturday, and Sunday through January 10, 2021, at Historic Virginia Key Beach Park, 4020 Virginia Beach Dr., Miami; 305-960-4600; brightlightsmiami.com. Tickets cost $45 via eventbrite.com. Olivia McAuley

It might not be in its usual theater setting, but that won't stop Miami City Ballet from continuing its holiday tradition of performing George Balanchine's The Nutcracker. This year, the family-friendly production will take place at Downtown Doral Park, where you can curl up on the lawn and experience the magical tale of toys come to life, dancing confections in the Land of Sweets, and fantastical snowflakes. Friday's opening night performance — the first of 14 — is a free community performance dedicated to first responders and essential workers and open only to them. 7:30 p.m. Friday through Thursday, December 31, at Downtown Doral Park, 8395 NW 53rd St., Doral; miamicityballet.org. Tickets cost $125 to $285 via tickets.miamicityballet.org. Suzannah Friscia 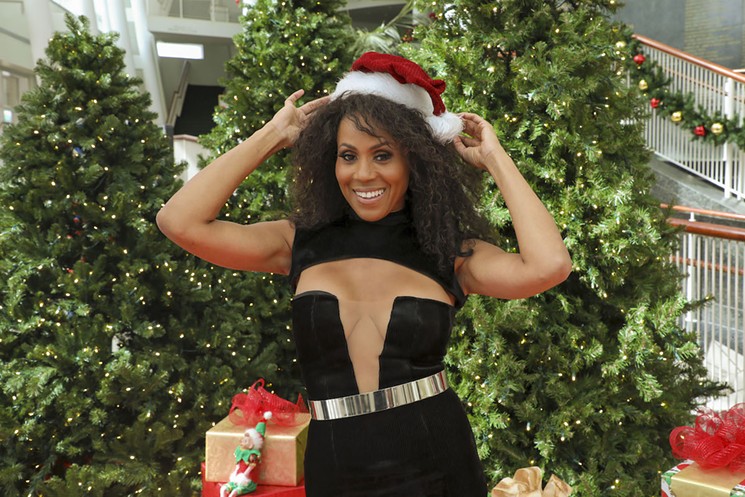 If you developed a green thumb while in quarantine this year, chances are you've accumulated a lot of greenery. If your selection could use an update or you're looking to try something new, head to Fairchild Tropical Botanic Garden's Houseplant Swap and Social. Bring two to three of your plant babies for someone else to take home and trade them for some new members to add to your plant family. Local vendors will also be on hand, selling other houseplants for purchase. 8 to 10 a.m. Saturday, at Fairchild Tropical Botanic Garden, 10901 Old Cutler Rd., Coral Gables; 305-667-1651; fairchildgarden.org. Tickets cost $11.95 to $24.95, free for members and children under 5. Suzannah Friscia

If there's a holiday tradition worth breaking, it's last-minute gift buying, and chef Michael Schwartz's restaurant in Coconut Grove has you covered on Saturday. The pop-up Holiday Market at Tigertail + Mary is a one-stop shop for brunch and boutique buying, featuring a handful of local vendors, including Dade Plant Company, Chere Lune, What's Up Gran-Hola, among others. The vendor booths will be located in the restaurant and throughout the courtyard, with a live jazz band serenading shoppers and brunchers alike. 2 to 6 p.m. Saturday at Tigertail + Mary, 3321 Mary St., Coconut Grove; tigertailandmary.com. Olivia McAuley

The New World Symphony gets into the holiday spirit at Dezerland Park Drive-In this year with a Wallcast performance of its Sound of the Season concert. The prerecorded broadcast will feature NWS fellows decked out in their best holiday costumes, performing seasonal favorites such as "Sleigh Ride" and selections from The Nutcracker. The performance will also highlight the rich variety of cultural traditions celebrated in South Florida, like Anthony DiLorenzo's "Navidad Latina," a medley of Latin holiday songs, and Sam Hyken's "Chanukah 5776," which honors the Jewish Festival of Lights. 7:30 p.m. Saturday, at Dezerland Park Drive-In, 14401 NE 19th Ave., North Miami; nws.edu. Tickets cost $50 per car. Suzannah Friscia

Broadway star and singer Deborah Cox brings holiday spirit, along with her Billboard-topping singles, to the Adrienne Arsht Center on Saturday for a one-night-only Christmas concert. "I'll Be Home for Christmas," an 80-minute, cabaret-style concert experience, will see Cox perform holiday favorites along with her original songs (including her latest "I Really Don't Want Much for Christmas") and Broadway hits. The concert is directed by musical theater legend Richard Jay-Alexander, who has assembled a full band to accompany the singer. 8 p.m. Saturday, at the Adrienne Arsht Center for the Performing Arts, 1300 Biscayne Blvd., Miami; 305-949-6722; arshtcenter.org. Tickets cost $70 to $220. Olivia McAuley

Featuring mouthwatering flavors like guava and cheese, maple and bacon, and white chocolate tres leches, Miami's favorite artisanal doughnut shop, the Salty, is popping up on Lincoln Road. The brand is harkening back to its early days in 2015 when cofounders Amanda Pizarro and Andy Rodriguez sold their baked goods out of a vintage camper in Wynwood. Look for the camper on weekends — and be sure to get your hands on one a doughnut before they sell out. 10 a.m. to 4 p.m. Sunday, at 700 Lincoln Rd. Mall, Miami Beach; saltydonut.com. Suzannah Friscia

Winter is the best time to see manatees in their natural habitat, and Virginia Key Outdoor Center is hosting a Manatee Photo Safari to guide you to some of their favorite hangout spots. The kayak and paddleboard tour will explore Jimbo's Lagoon, where several manatee families have made their home. You'll be able to take plenty of photos while respecting the animals and keeping a safe distance. You may also venture to Virginia Key Cove, where many manatee and dolphin sightings have been reported, and beach at North Point for birdwatching and a view of the Miami skyline. 10 a.m. to 12 p.m. and 2 to 4 p.m. Monday, at Virginia Key Outdoor Center 3801 Rickenbacker Cswy., Miami; 786-224-4777; vkoc.net. Tickets cost $30 to $130 via eventbrite.com. Suzannah Friscia

Immerse yourself in the Christmas spirit and get all your holiday activities in at Santa's Wonderland at Curtiss Mansion. You and the entire family can enjoy a meal with favorite holiday characters at Miami Springs Country Club, then head to Curtiss Mansion for a live performance of "Santa's Christmas Story Book." The show tells the story of Anya, Santa's daughter; and Rudolph, son of the evil Curtiss the Grinch; as they save Curtissville from the Grinch's plot. You can also wander the holiday village, where you'll frolic in the snow, make your own dessert at the Chocolate Factory, escape from Curtiss the Grinch's maze, write your letter to Santa, and get your photos taken. 4 to 10 p.m. Wednesday, at Curtiss Mansion, 500 Deer Run, Miami Springs; santaschristmasstorybook.com. Tickets cost $24 to $59.99 via eventbrite.com. Suzannah Friscia

It's that time of year when everyone's looking for a coquito fix. Why not cut out the middleman and create the coquito you want in your kitchen? On Wednesday, 1 Hotel South Beach's Holiday Cocktail-Making Class can help you achieve that goal. Learn how to make three new seasonal cocktails from beverage director Steven Minor, who'll introduce you to the "Plymouth Rock," a concoction of prosecco, gin, cranberry and raspberry syrup, and fresh lemon; the "Jack Frost," a decadent peppermint, chocolate, and vodka treat; and, of course, the 1 Hotel's take on the Puerto Rican specialty, coquito. 6 to 8 p.m. at the 1 Hotel South Beach, 2341 Collins Ave., Miami Beach; 833-625-3111; 1hotels.com. Tickets cost $40 via eventbrite.com. Olivia McAuley