Twenty Years of Art Basel in Miami Beach: "I Don't Even Know Why I'm Here" 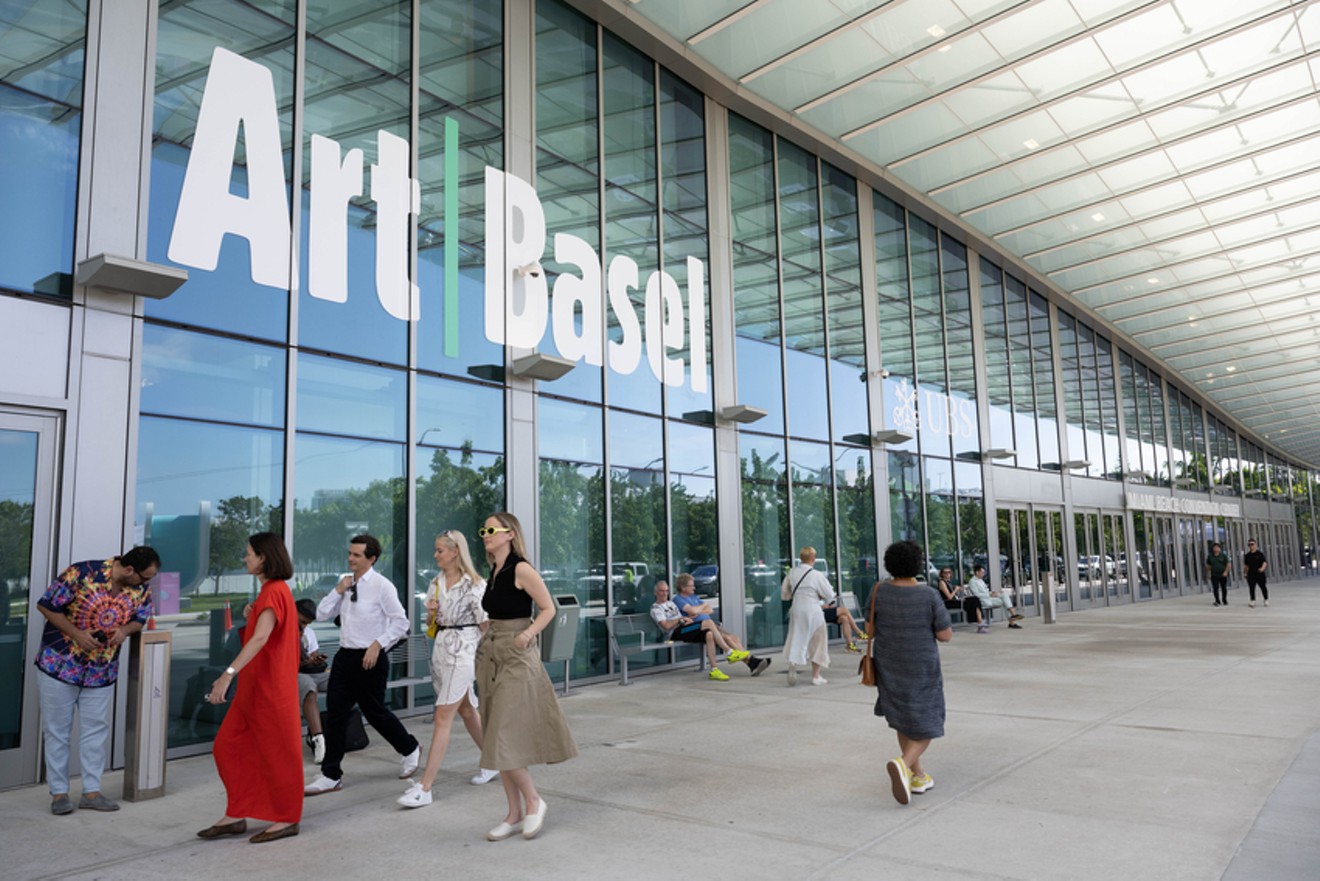 Outside the convention center during Art Basel Miami Beach Photo courtesy of Art Basel
No other event in the last 20 years has transformed Miami Beach and the surrounding areas more than the arrival of Art Basel.

When the massive art fair arrived in 2002, the city was still known primarily for nightclubs, cocaine, and celebs. (Still kind of is.) South Beach had swelled as a nightlife destination while Wynwood was still derelict warehousing and dingy studios for fringe artists like Purvis Young. Private art collectors like Norman Braman and the Rubell family began wooing the fair's Swiss operators, convincing them that an edition in the Americas would be a big deal.

How right they were. 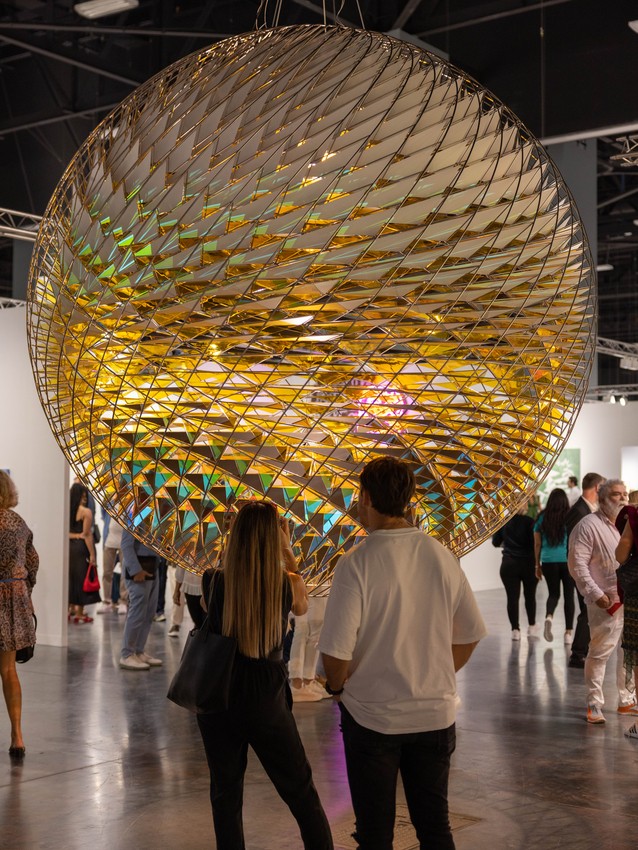 Fairgoers survey a large artwork on the convention floor at Art Basel Miami Beach.
Photo courtesy of Art Basel
In two decades, the city has gone from a vacation town to a haven for the world's ultra-wealthy to park their yachts and buy expensive paintings, if only for a week or so each December. Miami Art Week alone contributes, by some estimates, around $1.5 billion to the local economy. Over the years, dozens of unaffiliated satellite fairs have risen around Basel, including Design Miami, NADA, Untitled, and many more. Thousands of people flood in each year to party and chase clout under cover of the avant-garde. Millions are dropped on artworks of dubious quality and provenance. And yet all of this is normal, somehow. Remember when someone let Mauricio Cattelan tape a banana to a wall and sold it for 100 large? That's just Basel being Basel.

Today, Basel Basel, the one that started it all, almost feels superfluous to everything else going on around it. As Sarah Douglas wrote in ArtNews, "Whatever sprawling entity is now signified by the word 'Basel,' is, arguably, no longer dependent on artworks shown in a convention center. The fair could disappear, the rest would keep going." It can all be a bit fatiguing. A snippet of overheard conversation at the fair sums it up: "Sometimes I don't even know why I'm here." Izumi Kato at Art Basel Miami Beach 2022
Photo courtesy of Art Basel
With all this in mind, walking around the Miami Beach Convention Center can feel funny. One can see plenty of excellent examples of bad art, some bad in a funny way, most of it absurdly expensive, while walking the maze-like floor. The examples are endless: a portrait of a robotic Elvis by Hajime Sorayama at Nanzuka; a tacky, solid-gold Vanessa Beecroft statue of a woman kneeling at Jeffrey Deitch's misguided tribute to "Goddesses"; an interactive piece by MSCHF at Perrotin in the form of an ATM that displays bank balances as if they were high scores (which is admittedly a bit clever); a conceptual ice sculpture of a snowman designed to melt on purpose that feels like an absurd commentary on climate change considering the carbon footprint of everyone flying into Miami this week. One also can see so many examples of good art, mostly devoid of context other than as merchandise, that it often feels like you're playing Geoguessr, checking off the names of blue-chip artists as you pass by their work. Yayoi Kusama, yep. Lucio Fontina, okay. Basquiat, I'll take it.

Basel has been here for 20 years. It is worth asking now, after all it's wrought, whether or not it's worth something for us, the year-round inhabitants of Miami, or if it's just a bunch of expensive paintings in a convention center hall. Housing costs are higher than ever and now higher than anywhere else in the nation. Neighborhoods and communities have been, and are being, torn up for the sake of art. Wynwood became a gaudy tourist destination thanks to street art. Today, the murals remain, but unimaginative nightclubs and expensive condos have replaced the authenticity. Allapattah and Little Haiti are new colonies for local galleries, and who knows how soon it will take for the same gentrification cycle to push out the working-class natives. Cultural and environmental resources prized by locals — movie theaters, beaches, music venues, the Everglades itself — are being put to the axe by a city government that seems to care more for the tourists than their constituents. I think of Anton Chigurh in No Country for Old Men: "If the rule you followed brought you to this, of what use was the rule?" 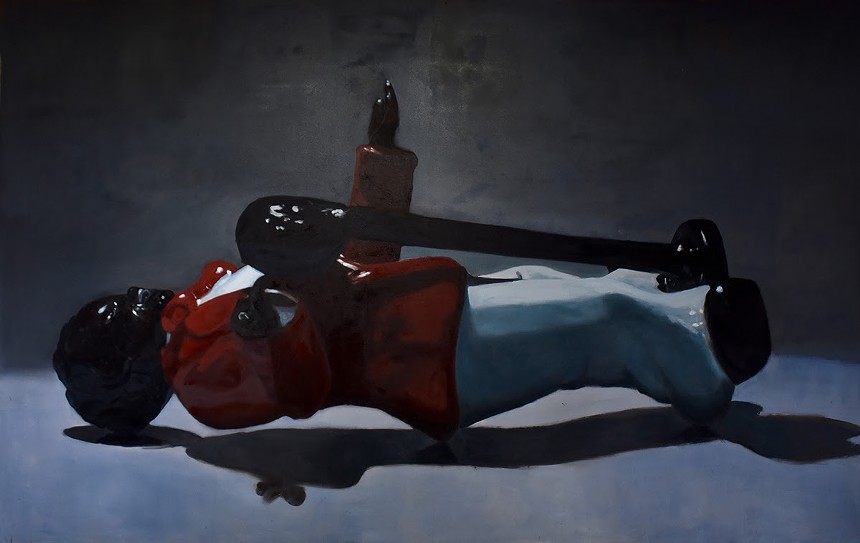 Reginald O'Neal's painting The Entertainer
Photo courtesy of Art Basel
Nevertheless, local art and artists have, to an extent, benefitted from Basel's presence. New institutions, such as the Institute of Contemporary Art, Miami, have opened while older ones have upgraded, often buoyed by the collector class. The Rubells moved their art museum into a 100,000-square-foot former warehouse in 2019, while the Miami Art Museum controversially invited Jorge Pérez to stamp his name on its new Herzog- and de Meuron-designed landmark building in 2013 before he opened his own space, El Espacio 23, half a decade later. New galleries, residency programs, and organizations such as Bakehouse and Oolite Arts have given Miami artists space to work and develop their skills. One of the best booths at this year's Art Basel, local gallery Spinello Projects, showed work from Reginald O'Neal and Juana Valdes, two Miami-raised artists of color. O'Neal's paintings are compelling, featuring images such as cotton plants and blackface minstrelsy toys that confront American racism with a sorrowful, sumptuous beauty. I stared endlessly at his portrait of an older woman washing at a sink. Would these artists have the same opportunities if Basel had never come here? I'd say no.

The real dirty secret of Basel Basel is this: Away from the spectacle of visual pollution and million-plus sales, there is good art to be had. Much of it, like the Spinello display, is muted or subtle, but this can make it even more satisfying to discover. The few Asian galleries at the fair seem exceptionally skillful at this: I recall Seung-taek Lee's paintings of long strands of straight, black hair on unpainted canvas at South Korea's Gallery Hyundai or the beautiful work by Lee Ufan and Tadanori Yokoo at Tokyo's SCAI The Bathhouse. 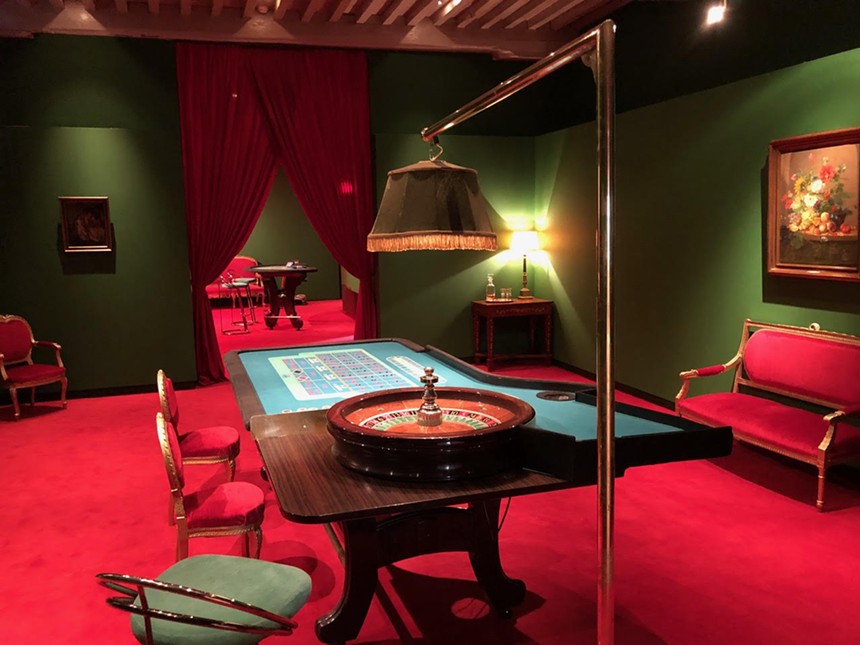 Guillaume Bijl's "Installation - Casino" on view at Art Basel Miami Beach 2022.
Photo courtesy of Art Basel
Many of the best booths are in sections like Nova and Positions, focused on single artists or historical presentations. If you make the trek across the causeway and pay the price of admission, these are the sectors worth dedicating your time to. In Nova, at New York's Company gallery, John Edmonds' gorgeous black-and-white photographs juxtaposed traditional African sculpture with contemporary black subjects. Near the Spinello booth at Jerome Poggi Gallery, Ukrainian artist Nikita Kadan presented a group of dark, shadowy text-over-landscape paintings the artist apparently made while Kyiv was being bombed. An excellent Kabinett presentation showed Izumi Kato's fluorescent paintings of deformed, big-headed figures that simultaneously recall ancient pottery and feel destined to end up in avant-garde memes for zoomer teens.

My absolute favorite booth had to be Meredith Rosen Gallery's Survey section presentation of an installation by Belgian artist Guillaume Bijl. The booth had been turned into a mini-casino with a working roulette and blackjack table. Everything in the room is fake, of course; the gambling is not for money, and the Dutch old-master paintings on the wall are printed from Wikipedia. But it's fun, and that's what makes it smart. Despite the piece being from a totally different time and place, the gallery and artist accidentally captured the essence of Miami: Everything is fake, but it doesn't matter when you're having fun.

Art Basel. Thursday, December 1, through Saturday, December 3, at Miami Beach Convention Center, 1901 Convention Center Dr., Miami Beach; artbasel.com. Tickets cost $55 to $2,200.
KEEP MIAMI NEW TIMES FREE... Since we started Miami New Times, it has been defined as the free, independent voice of Miami, and we'd like to keep it that way. With local media under siege, it's more important than ever for us to rally support behind funding our local journalism. You can help by participating in our "I Support" program, allowing us to keep offering readers access to our incisive coverage of local news, food and culture with no paywalls.
Make a one-time donation today for as little as $1.