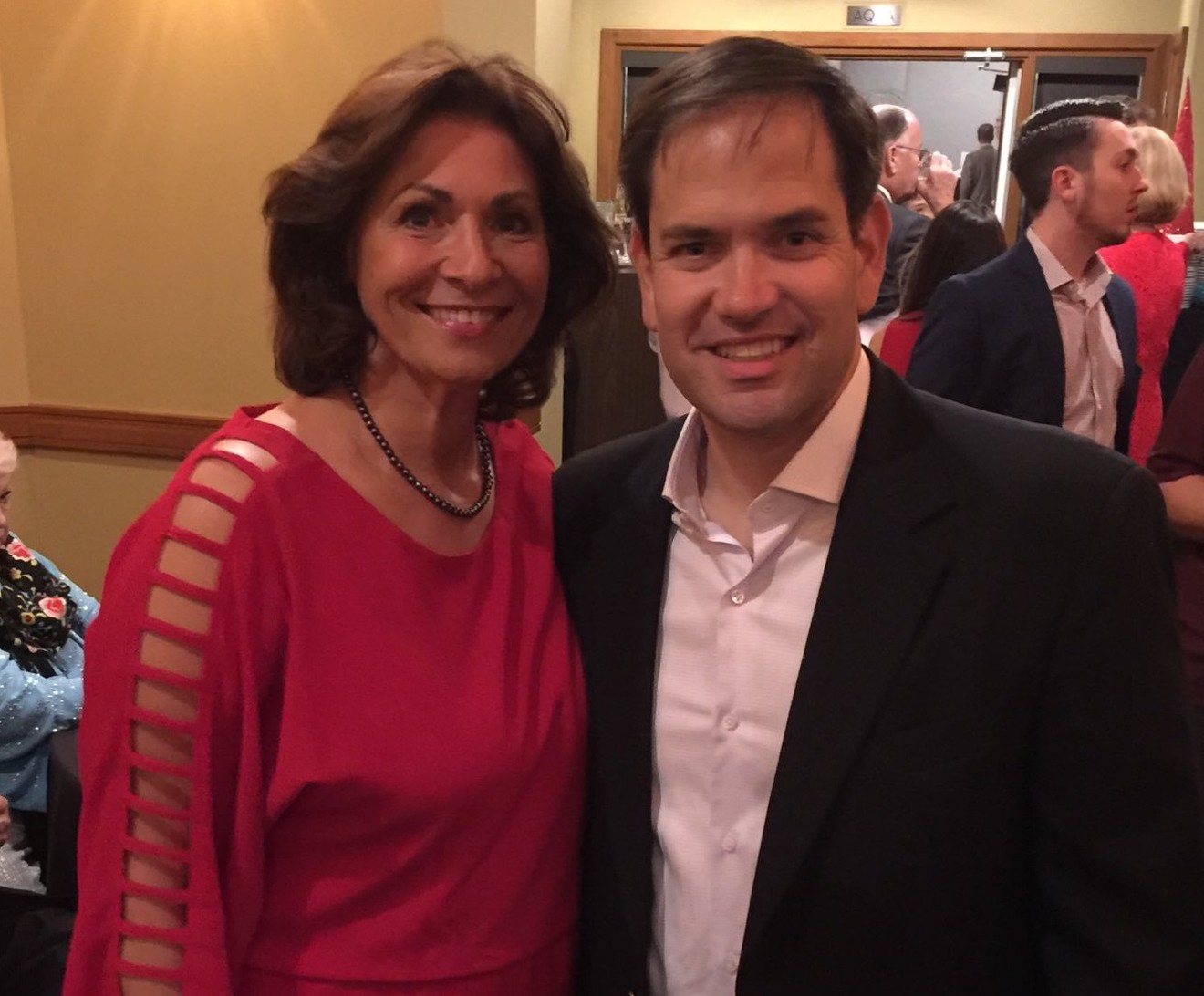 Susan Goldstein via Twitter
Susan Goldstein previously served as a Florida state representative for western Broward County from 2004 to 2006. She's now a prominent figure in Tallahassee and serves on the board of the Florida Association of Professional Lobbyists. In 2016, she was Marco Rubio's presidential campaign chair in Broward.

And in 2018, she's apparently fine with announcing she thinks Barack Obama looks like a monkey, and she doesn't get why that comment is obviously racist.

After Roseanne Barr got her show canceled this past Tuesday for comparing a black woman to an ape, Goldstein decided to go on a public Facebook rant decrying what she feels is a "double standard" between liberals and conservatives. Why, she repeatedly asked online, are people not racist for comparing Donald Trump to an orangutan but racist when someone like Barr compares a black woman to an ape?

"And I truly think Obama resembles the Curious George cartoon, who I think is an adorable character," Goldstein wrote on Facebook. "Curious George that is. That is what my eyes see. And I am not racist, and there is not mean-spirited intent in my observation. But I can't say it. Double standard."

She then added, "One thing has nothing to do with the other. God made everyone with some kind of cultural identifying characteristics."

via Facebook
When New Times asked Goldstein to elaborate on the comment, she said that the question was making "something out of nothing" and that "this is why people hate the press."

Goldstein initially denied she wrote the comment and claimed someone else had posted the text under her name. After a reporter read the quote back to her, though, she no longer denied writing it and instead said she was having a discussion "among friends." She vehemently denied her comment was racist.

"I believe there is a double standard," she said. "All I was trying to say is that I don't get why this 'comedian excuse' works for some and not others. I saw Wanda Sykes compare Donald Trump to an orangutan. Didn’t we all evolve from apes? Isn’t that what the evolutionists agree that we all evolved from? So I don’t understand why it’s OK for a comparison to be made to an ape for white people but not blacks."

She also told New Times she is "no longer a public official" and therefore not deserving of media attention. Asked about her role in Rubio's latest campaign, she said her job was a "volunteer role" for which she wasn't paid. Spokespeople from Rubio's Senate office did not immediately respond to messages from New Times.

Goldstein has been having a hell of hours on Facebook, where she's been posting memes defending Barr's racism, questioning why (black) show writer Wanda Sykes gets a cultural pass for calling Trump (who is white) a monkey and sparring with basically anyone who calls her out. After Goldstein posted one meme complaining about Sykes and subsequently asking why she can't compare black people to apes, one fellow Facebook user sent her a link to the Wikipedia page for "Scientific Racism."

It's amazing anyone needs to explain the difference in 2018, but here we go: Slaveholders, white supremacists, and segregationists have for centuries argued that black people are "advanced apes" in order to justify enslaving, mistreating, or segregating themselves from black people. Similar comments have been used for centuries to dehumanize and demean black people. The same has not been done to white people. Somehow, after Barr's meltdown this week, sections of the online right are pretending this history somehow doesn't exist. 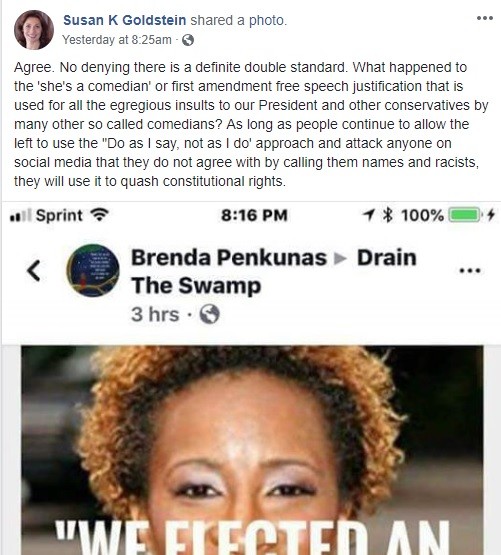 via Facebook
In another move that's extremely on-brand for the anti-LGBTQ Rubio, Goldstein also made some fairly homophobic comments. At one point, she argued there is "much worse" on TV than the pro-Trump Roseanne reboot: such as being forced to look at gay men.

"There are men kissing other men on Network TV now," she wrote.

New Times asked Goldstein if she was aware of the dark history of comparing black Americans to apes or monkeys. She said some of her Facebook friends had mentioned it to her this week.

"I don't come from a racist so that never occurred to me," she said. "I didn't compare all black people to apes. I said Barack Obama looked like Curious George. I also called him cute!"

After speaking with New Times, she posted this statement on her Facebook page:

I like the Roseanne show. I am not a racist. Just think there is a double standard. Thanks FB friends for the very civil and enlightening discussions and opinions from both sides. Especially my friends... and others whose historical citings helped me to better understand the other side. I appreciate the opportunity to have honest discussions and spirited debate when it comes to such divisive issues.

via Facebook
KEEP MIAMI NEW TIMES FREE... Since we started Miami New Times, it has been defined as the free, independent voice of Miami, and we'd like to keep it that way. With local media under siege, it's more important than ever for us to rally support behind funding our local journalism. You can help by participating in our "I Support" program, allowing us to keep offering readers access to our incisive coverage of local news, food and culture with no paywalls.
Make a one-time donation today for as little as $1.