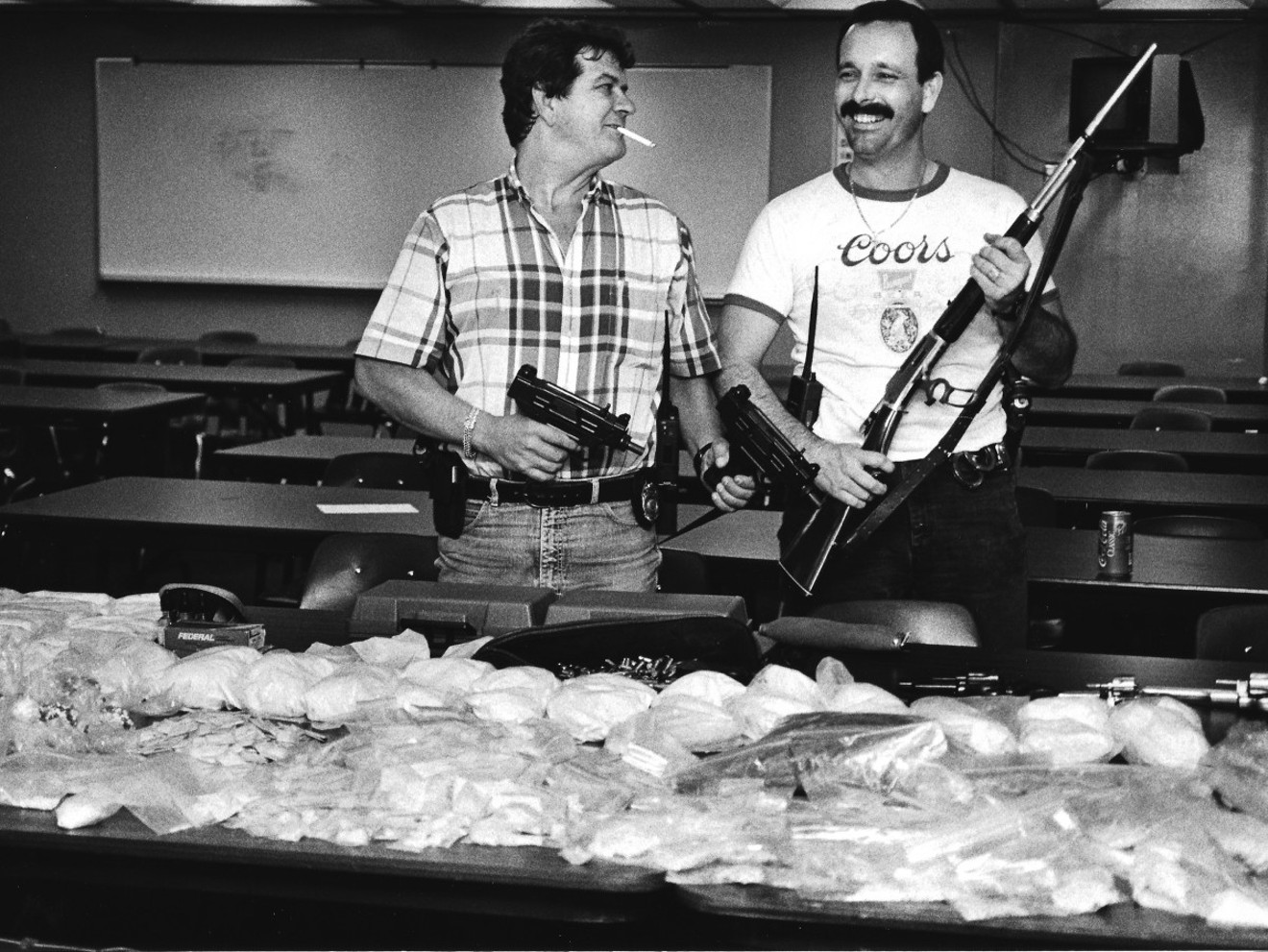 Rakontur
Thirty years ago this November, federal agents unsealed a litany of indictments against arguably the most famous drug traffickers in world history: The Medellín Cartel, led by the infamous drug-importing Ochoa crime family and its accomplice, Pablo Escobar. The indictments were billed as the end of Miami's era of drug-riddled violence. In 1986, crime had skyrocketed to unforeseen levels: There were 12,000 incidents per every 100,000 people. (Turns out arresting Escobar didn't solve the city's problems. The crime rate jumped to 13,500 by 1989.)

But newly released data show just how much the city has changed since Colombian and Cuban drug cartels were shooting each other in the streets. Today the Florida Department of Law Enforcement released its yearly Uniform Crime Report for 2016, which shows that crime across Miami-Dade County dropped a comparatively huge 5.8 percent last year — down to 4,118 crimes for each 100,000 residents.

That's less than one-third of Miami-Dade's peak crime rate throughout the entire 1980s. The county's crime rate has dropped steadily over the past handful of years. (In 1999, there were 9,000 crimes per every 100,000 residents.)

Nearly 30 years after the central figures in the city's sordid, coke-fueled history were arrested, crime has dropped to levels not seen since the 1960s. In 1971 — the earliest year in which FDLE's stats are posted online — the crime rate was 5,726 incidents per 100,000 people. And that was before cocaine or the Mariel Boatlift hit the area.

Broken down further, the new crime stats show every major crime across the county fell last year, with the exception of rapes, which rose from 756 to 796. (Other major crimes include murder, aggravated assault, robbery, burglary, larceny, and car theft.) There were 19 fewer murders, 535 fewer robberies, and a whopping 2,760 fewer burglaries.

Broken down at a department-by-department level, crime in virtually every county metro area declined as well. Crime dropped 6 percent in the city of Miami and 7 percent in both Hialeah and Miami Beach. Crime in Doral is down a massive 20 percent.

The 30-year record-low likely has less to do with any specific Miami-area police department than it does national trends. As a whole, violent and property crimes have plummeted since the 1980s across America, and crime analysts say there isn't really a good answer as to why. Law-enforcement defenders often tout the fact that crime plummeted when America began locking up significantly more of its citizens, but academic analysts argue that idea is bunk. In 2015, a huge report from the Brennan Center on Justice argued that lessening the incarceration rate would almost certainly further bring down the crime rate.

But the newly released crime stats in Miami underline a point that almost always gets lost in political or police discussions across the Magic City. Crime is a small fraction of what it once was in the county, but politicians, especially in Miami Beach, tend to act as if we're still living under drug-crisis conditions.

This year's mayoral and congressional races in Miami Beach have been dominated by claims that the city is a crime-addled nightmare. Commissioner Kristen Rosen Gonzalez, who is running for U.S. Congress, was caught in a leaked email suggesting that cops needed to be given "back their bullets" and, we assume, allowed to shoot more civilians. (Rosen Gonzalez has since apologized for her comments.) Commissioner Michael Grieco, who was later linked to an illegal political action committee, insulted Miami's black community by suggesting that Urban Beach Week — a mere three-day celebration over Memorial Day weekend — be canceled.

All of those ideas hinged on the fact that crime is out of control in Miami Beach, but historical data says otherwise. Of course, one murder or rape is one too many, but it's irresponsible to talk about crime in South Florida without giving voters proper context.

The same can be said for the area's police departments. Forces across the county routinely request funding upgrades and equipment increases under the pretense that robberies and assaults are out of control, that "problem" neighborhoods are unmitigated hellscapes, and that the law-abiding among us aren't safe walking the streets. City of Miami Police officers have been given extra AR-15-style rifles, commissioners have allowed intrusive surveillance technology to infect citizens' lives, and departments in extremely safe towns such as Coral Gables have obtained mine-resistant, tank-like vehicles to combat crime.

In the past two weeks, Miami-Dade County Police was forced to walk back a plan to spy on entire neighborhoods using plane-mounted cameras after New Times revealed the aspects of the plan to the public. MDPD claimed it needed the spy planes to combat a rising crime wave in the county's North Side district, between Miami and Miami Gardens.

But criminal-justice-reform advocates were quick to point out that the department could better address problem neighborhoods through community-oriented policing techniques, which allow cops to get to know residents, and better economic programs such as affordable-housing protections and minimum-wage increases. The same can be said of the entire county.

Though it would be a joke to call Miami-Dade "safe," crime has reached historically low levels in the county. It's about time local political leaders started acting like it.