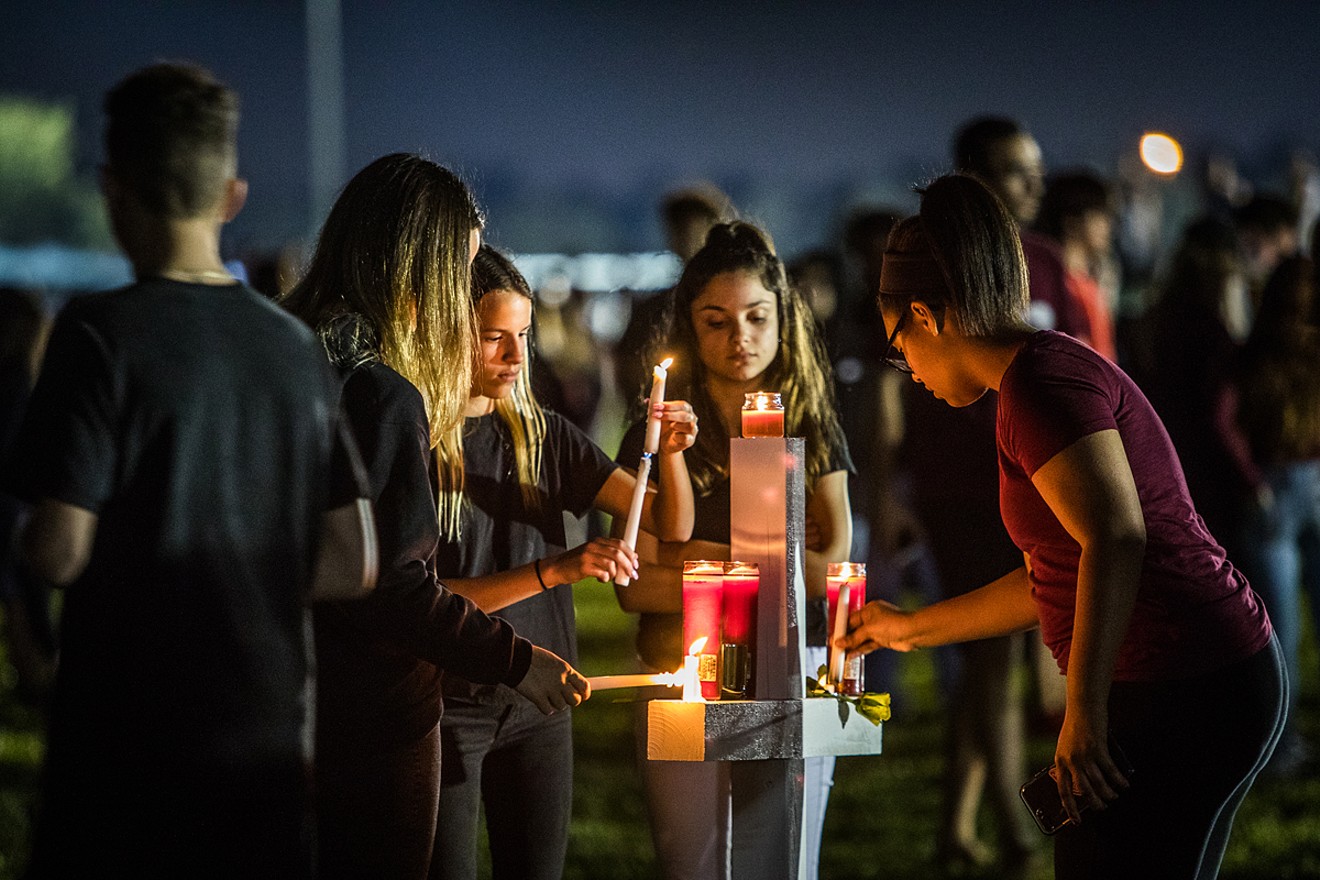 Photo by Ian Witlen
After Parkland shooter Nikolas Cruz killed 17 people including three members of the Broward Teachers Union (BTU) last week, union members — led by President Anna Fusco — began marching in the streets to demand gun reform, better school mental-health counseling services, and a world where their students can learn without worrying about being murdered for no reason.

Tomorrow, less than a week after the shooting, a state Senate committee is scheduled to hear a bill that could lead to decertification of the BTU. HB 7055, a sprawling education-funding package, includes a provision that would strip bargaining power from any teacher's union that fails to enroll 50 percent of its workforce.

As it stands, Broward County's union tops that 50 percent margin, so it wouldn't lose its bargaining power overnight if the provision passes. But next door, the largest teachers' union in Florida, Miami's United Teachers of Dade, would be affected immediately. The Florida Senate education committee is scheduled to hear the bill tomorrow at 11 a.m. — exactly six days after Cruz murdered 17 public-school students and teachers.

Reached via phone today, Fusco, BTU's president, said she was flabbergasted when she first heard state lawmakers were pushing the bill. But now, in the wake of last week's tragedy, she says lawmakers must scrap the measure completely.

"These are educators who want to take care of students, to teach their students, and now we've learned that they are shields and bulletproof vests for their students too," she says, referencing the Marjory Stoneman Douglas High School educators who died trying to keep their pupils safe. Football coach Aaron Feis, for example, was killed because he used his body to shield students from gunfire.
Republican Florida Rep.  Scott Plakon proposed the decertification measures in standalone bills during the 2017 and 2018 legislative sessions. Those bills included provisions exempting state police, fire, and corrections unions from the decertification law. (Those union members generally vote Republican, while teachers, nurses, and most other statewide union members vote Democrat.) Plakon has not fully explained why the provision is necessary or would help anyone; he has simply said it is not "fair" for a union that represents less than 50 percent of a workforce to negotiate on behalf of everyone, even if that union is working for better funding, vacation, pensions, and health care for all employees.

The lobbying arm of the Koch brothers' network, Americans for Prosperity, has endorsed the idea of required 50 percent enrollment. In 2017, Miami-Dade's union head, Karla Hernandez-Mats, told New Times that teachers see the idea as part of the nation's assault on workers' rights. The provision is nearly identical to Wisconsin's infamous Act 10, the transparently anti-union bill that Gov. Scott Walker passed in 2010. Since Act 10 passed, union membership has been crippled. Job benefits for teachers, specifically, have declined sharply.

"From a national level, we see this as a direct attack on labor rights," Mats said that year. "So I think that it’s happening at the national level, and now it's coming all the way down to the state."

HB 7055 would also impose a long list of education funding changes that state teachers unions oppose — notably, the bill would create a program called the "Hope Scholarship," which would let any student who reports being bullied flee to a private school. Public-school unions in the state say this is just a transparent attempt to shovel more money toward the private-school since rates of bullying at public and private institutions are basically identical.

"This bill is about more than just decertifying the unions," Fusco said. "They're looking to defund so many things and just put money into private institutions. Like this 'bully bill' — the idea that we have a 'bully epidemic' in public schools is totally false." (Fusco is also calling for the state to postpone its upcoming round of "high-stakes" standardized testing, which hits public schools every March.)

For what it's worth, the state Senate has not been particularly receptive to union-decertification ideas in the past, but in hard-right Tallahassee, anything can happen as long as it's mean to workers and the poor.

Florida teachers' unions say the omnibus spending bill's provisions will make it much more difficult for them to fight for basic rights for their workers. Unions are one of the most powerful tools workers can use to lobby state and federal officials and push for new laws — the BTU, for example, has gone all-in on fighting for gun-control laws and assault-rifle bans in the wake of the Stoneman Douglas shooting. Decertification would hamstring the efforts of those in any other Florida school district rocked by a school massacre.
"This bill should be wiped away," Fusco said today. "We should be fighting for more funding for public schools. We should be doing whatever it takes to stop this arsenal of guns on the streets. We shouldn’t have to be looking at putting safety officers in our school or building schools into armed fortresses. We should be focusing on what just happened, which has ruined not just 17 families, but thousands across the nation."