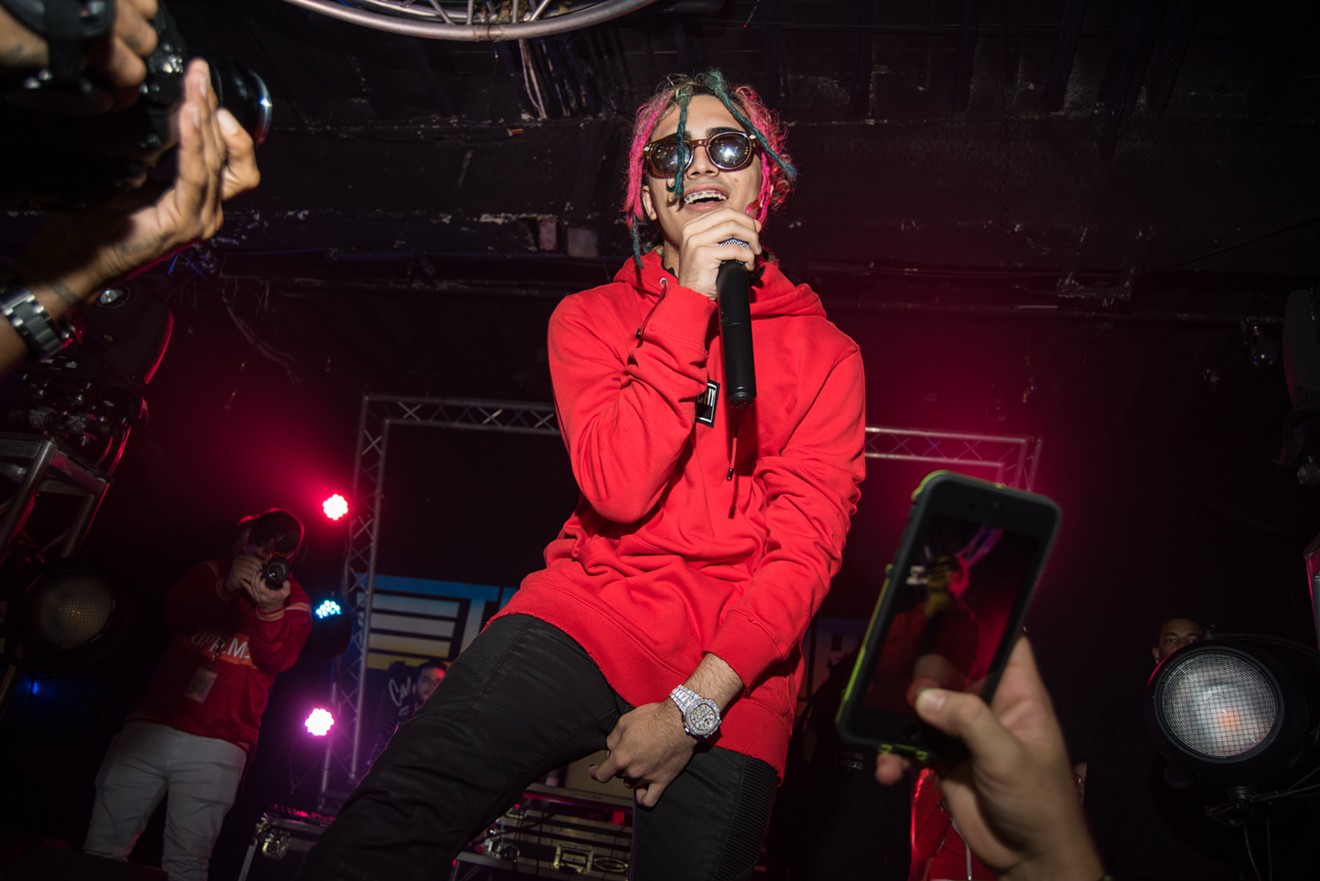 See more photos from Lil Pump's performance at the Hangar here. Photo by Amadeus McCaskill
Last night, I rolled up to the Hangar at 9 p.m. and rushed to the entrance because I was worried about missing Lil Pump, who ended up not going on until 45 minutes after he was supposed to perform. In my Zen-like focus to see a rapper whose big thing is saying “Gucci Gang” 53 times in his hit song, I disregarded warning signs about what would happen to people who don’t pay for parking.

Midway through the show, I remembered the parking, but it was too late. My car got booted at a Lil Pump show.

Why is this the most embarrassing thing I’ve ever written?

For one, I must have been the oldest person in that club. I’m 22. A good 80 percent of the packed room would have to ask me to buy cigarettes for them. Weed and vape smoke filled the air. Shouts of “Eskeddit!” (“Let’s get it”) and “Where the fuck is Lil Pump?” rang out as we waited for him to arrive. It felt like being in a grimier version of a junior homecoming dance, and appropriately enough, it was Lil Pump’s homecoming.

The 17-year-old rapper, who was 1 year old when the September 11 terror attacks happened — if you want to feel old — was born in Miami. He was expelled from several schools in the area before hitting it big as the archetypal SoundCloud rapper, whose wild persona and vapid bars about doing drugs, buying expensive clothes, and hating school resonated heavily with the current generation of angsty youths. And when I say “resonate,” I mean the crowd knew every word to every song.

See more photos from Lil Pump's performance at the Hangar here.
Photo by Amadeus McCaskill
Many observers have compared Pump and his cohort of teenage hype rappers, many from South Florida, to the punk movement. There are similarities, sure: The songs are short and noisy, the performers are amateurs, and the shows are mostly about releasing energy. Pump frequently demanded the crowd open up the pit, and everyone gleefully obliged, moshing and running into one another with joy. The greatest difference, of course, is the lack of political content. Zero thought goes into the composition and enjoyment of a Lil Pump song. It is pure id.

So the performance was good, not great. Rap shows are the most hit-and-miss things in the world, and this was mostly a hit. Wearing a Gucci polo (of course) and his signature pink dreads, he had a commanding stage presence that kept the energy going for most of his set. He didn’t stand around much. He rapped most of the words. He left a bit early, but he has fewer than 20 songs, and most of them run less than three minutes, so I'll cut him some slack.

By the end, I felt like I was the only one in the room who didn’t have fun. It was not my scene, not my kind of music. The whole affair led me to think that if you're out of your teens and at a Lil Pump show, you've made a mistake (my mistake was becoming a music journalist). I felt out of place leaving the venue and hopeless when I found my crippled vehicle. I got the boots off, but it took nearly every penny in my checking account. As of this writing, I have literally a dollar to my name. It’s up to you to decide whether it was worth it.