A dog in Homestead was rescued by Boots on the Ground Volunteers after Hurricane Irma. Courtesy of Boots on the Ground Volunteers
In the aftermath of Hurricane Irma, many pets joined the ranks of strays, precariously living on South Florida streets. Some owners who evacuated left their pets behind during the storm, and surviving animals — confused, hungry, and traumatized — either were trapped or wandered away from their homes.

That’s the scenario one group of rescuers faced when they arrived in Homestead fresh from the ordeal of Hurricane Harvey in Texas. Boots on the Ground Volunteers (BGV), a newly formed nonprofit, set up a forward operating base three days after Irma hit South Florida and began receiving animals the following Saturday for one week. In total, they treated about 70 animals.

The Homestead Rodeo Association donated space, mobile A/C units, and other supplies to support the operations where BGV took in dogs, cats, and even a potbellied pig needing foster care. Many animals were strays, some lost, and others let go, according to BGV cofounder Amanda Trask. “We had some owners surrender their pets,” she says. “People lost everything. They had no home, no insurance, nothing.”

To manage the fate of the rescued animals, Trask, a lifelong animal advocate, worked with a team including BGV co-founder Jessie Cox; five other volunteers, some of whom were trained vet techs; and Dr. Michael Claudio, senior associate of Mobile Pet Doctors of Key Largo. Another cofounder, Brandy Barnes, coordinated rescues and transportation remotely.

Claudio is FEMA-certified and donated his time as well as medications and supplies to the effort, as did Dr. Robert Prosek, president of Florida Veterinary Cardiology. BGV took in animals from Homestead to Key Largo, including one dog with a broken back and another that had an object fly through its cornea.

The aftermath was especially dire in the Florida Keys, where the chain of islands bore the brunt of Category 4 winds. “I treated a cat today that was pulled out of the rubble from a collapsed home in Key Largo,” Claudio says. “I’m afraid to wonder how many are still trapped.”

According to Trask, animals were taken care of after intake, given an ID number, photographed with a card, and then transported to area animal shelters, including Paw Patrol of Miami, Big Dog Ranch Rescue, Limbo Chihuahua Rescue, Catopia Cat Rescue, and Just Jacks Rescue. "We worked with no-kill rescues in Florida and outside of Florida for owner surrenders, rescue surrenders, and true strays," she explains. "But animals who may be owned and have a chance at reunification remained in Florida."

Claudio adds that many residents were unable to leave with their pets on county-sponsored evacuation buses. “As Americans, we adore our animals,” he says. “But one of the biggest mistakes we make is that we think everyone else adores our pets as well. The buses have to operate within the rules of public health. I think people assumed that animals would be welcome on evacuation buses.”

CT Scan of "Rocky," a dog rescued in Key Largo in the aftermath of Hurricane Irma. Volunteers say his spinal fracture was likely caused by a fallen tree branch or being picked up and flung by the wind during the storm.
Courtesy of Mobile Pet Doctors
Microchipping is key to reunification at any time, but especially in the aftermath of a natural disaster. Miami-Dade Animal Services offers microchipping for $15 per pet. Trask and Claudio encourage owners to microchip their pets and register unique ID numbers with the microchip company’s database. Collars and tags aren’t good enough because they aren’t permanent.

“I’d encourage pet owners to have a disaster plan," Claudio says. "Know what your limitations are. Trying to do that at the last minute with Irma ended catastrophically.”

Grassroots organizations such as BGV provide valuable assistance to county animal control after major storms when government agencies are overwhelmed and simply can’t keep up with demand. Claudio, who has treated animals from Coral Gables to Key West, says the network of animal lovers is strong. “There’s a whole unique and wonderful network of groups that pour their heart and soul into caring for animals,” he says.

And that network runs beyond state lines. BGV is now on its way back to Texas, but the story of how this group got to Florida highlights the reality of volunteer work in the aftermath. For Trask, the path from Texas to Florida involved cutting through some red tape. Offering a helping hand in disaster relief, although well-intentioned, isn’t always easy.

Trask says she had used up her vacation money and time to help in Texas and was asked to travel to Florida via a network of volunteers. A fundraiser among family and friends supported the organization’s journey to Homestead. “It’s important to be transparent,” she notes. “I publish receipts for everything.”

The First Response Unit (FRU) for Humanitarian Aid and Rescue Project (HARP), led by Bryant Burke, which also supported relief efforts in Miami-Dade after Hurricane Harvey, trusted BGV to handle animal rescue after working with the group in Texas. HARP sponsored BGV as an umbrella organization since BGV was formed out of Harvey and is still working toward attaining nonprofit 501(c)(3) status.

Bryant, a former war photographer, founded HARP in 2010 after witnessing atrocities in South Sudan. The organization has since helped provide relief to areas experiencing war, ethnic cleansing, famine, and disease, as well as natural disasters in the U.S. and abroad.

“The animal rescue world has a lot of nutty people within it,” Bryant says. “Jessie and Amanda were solid. When I assessed the amount of work they had actually done [in Texas], I was blown away. We were more than happy to fiscally sponsor Boots on the Ground Volunteers and use them again as the animal rescue arm of HARP.” 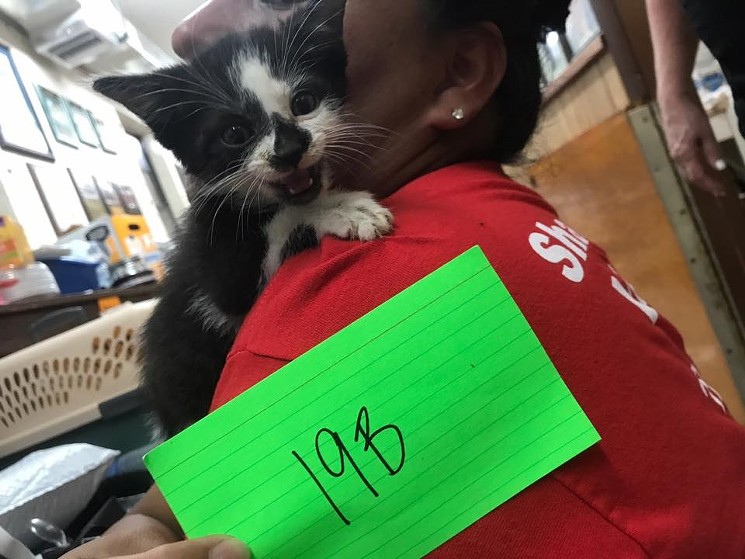 This kitten in Homestead was rescued by Boots on the Ground Volunteers after Hurricane Irma.
Courtesy of Boots on the Ground Volunteers
Trask notes it would have been almost impossible for BGV to support animal rescue in Florida without HARP’s fiscal sponsorship and the chance to set up camp on private property. Individual grassroots efforts are often able to hit the ground running faster than larger organizations that need time to mobilize on a macro level. “This was a lesson learned in Texas that applies to Florida,” she says. “You didn’t see a large corporation come out in the first 48 hours. You saw individuals who just got in their cars and spent their own money. Those are the ones who made a difference without the red tape.”

Bryant says anyone who’s interested in helping should consider disaster preparedness education. FEMA disaster response courses are free online and help individuals and organizations obtain an SID (student ID number) for access to locations. “I don’t always advocate for government, but there’s structure, and those things are golden," he admits. "Everybody wants to go boots-on-the-ground with the attitude that they know what they’re doing, but when everyone is running on their own system, in the end it’s just a jumble of things to sift through.”