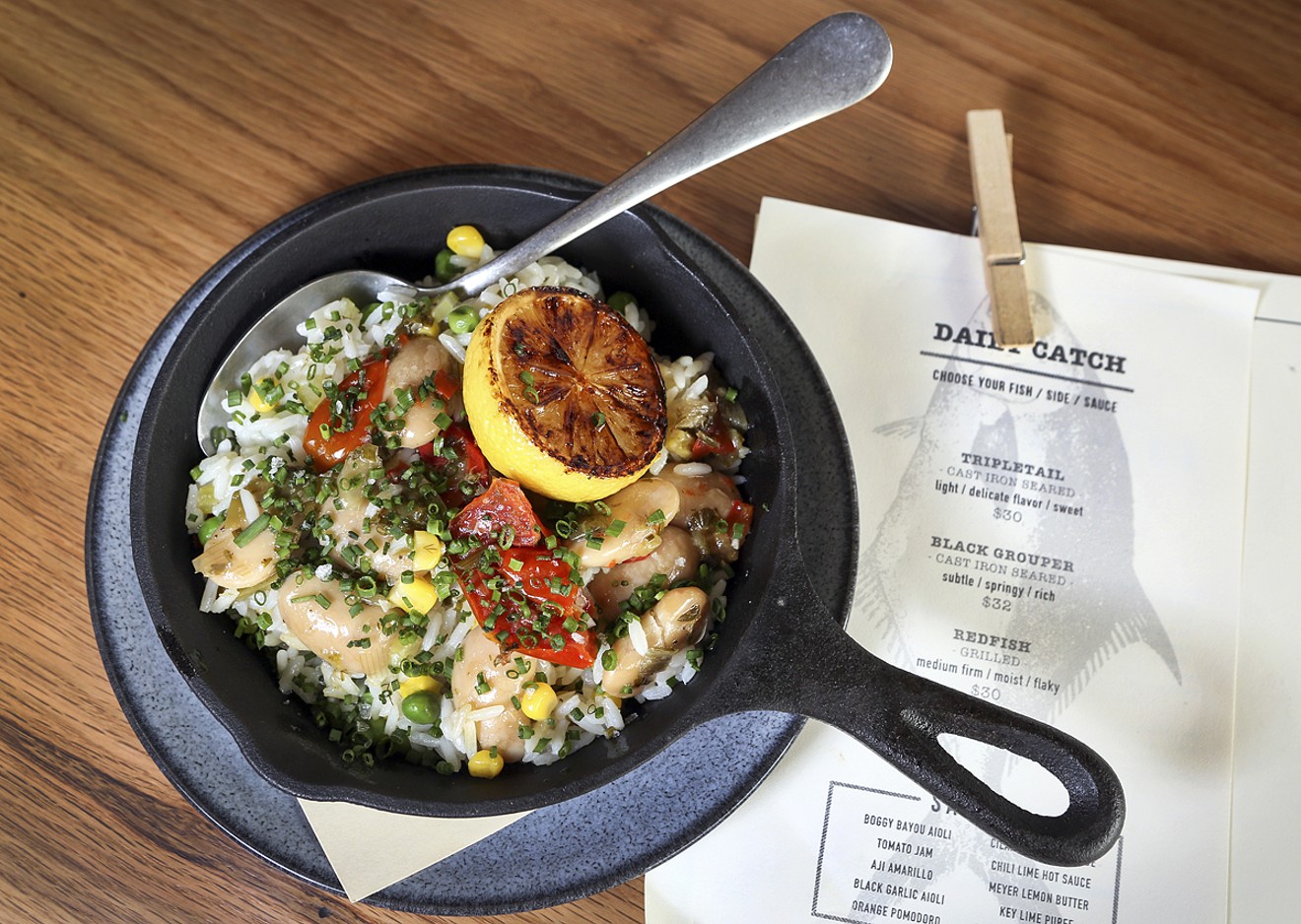 Before Janine Booth and Jeff McInnis were Miami restaurant royalty, they set sail on a fishing trip from South Beach late one sunny afternoon in fall 2013. The day went brilliantly. After laying anchor a mile south of Key Biscayne, McInnis hauled in a hefty snapper and a small grouper.

As the sun moved toward the horizon, the blond Barbie and Ken look-alikes motored west toward Stiltsville, an iconic cluster of wood-framed, century-old pastel shacks known for fishing, gambling, and debauchery.

Moored there, overlooking the sea, the couple kissed for the first time.

"You know how it went," McInnis says with a deep chuckle. "The sun set and it happened. Then we came back and cooked together."

Four years later, not much has changed. The 39-year-old McInnis and 30-year-old Booth are now partners in life and business. This past September, they opened Stiltsville Fish Bar (1787 Purdy Ave., Miami Beach; 786-353-0477), an upscale seafood shack in Sunset Harbour.

The restaurant, a partnership with Grove Bay Hospitality Group's Francesco Balli and Ignacio Garcia-Menocal, is housed in the former Joe Allen space. The couple's approach is both basic and groundbreaking. In a time when billows of smoke and whimsical tableware are de rigueur, McInnis and Booth offer approachable and consistent food. It's similar to the concept that made Joe Allen an icon for more than a decade.

"If you treat your people well, it'll show. That's how all of this is really possible."

Raised in Niceville in the Florida Panhandle, McInnis spent his childhood on fishing boats. After culinary school in South Carolina, he worked in the Virgin Islands, San Francisco, and Miami, including stints at Norman's in Coral Gables and DiLido Beach Club at the Ritz-Carlton South Beach. Booth, a native of Australia, traveled throughout Europe and Asia before enrolling in Le Cordon Bleu in Miami.

The two, who competed on different seasons of Bravo's Top Chef, met on the line at the now-defunct Gigi in midtown Miami. In 2011, they reunited at Yardbird Southern Table & Bar, where McInnis and the restaurant earned three James Beard nominations in two years. Shortly after that first kiss in 2013, McInnis and Booth relocated to New York, moved in together, and dumped their life savings into opening Root & Bone in Alphabet City. The restaurant quickly caught on, and the couple returned to Miami in 2015 to debut an American dim-sum concept, Sarsaparilla Club, in the Shelborne South Beach. In early 2017, they opened a Root & Bone pop-up at a Wyndham in Puerto Rico. After suffering damage from Hurricane Maria, the eatery is set to reopen soon. The couple recently closed the Sarsaparilla Club at the Shelborne to make room for a second Root & Bone pop-up. (This past summer, Root & Bone partner Richard Freedman sued the pair, but McInnis and Booth say there's no validity to any of his claims.)

Now comes Stiltsville. The Sunset Harbour structure, which was built in 1940, required almost a complete renovation of the kitchen and main dining area, McInnis says. He and Booth also resolved to restore the rooftop bar, which had been neglected for years. That project, including a stairway and elevator, will be complete by late 2018.

Despite setbacks, on a recent Saturday night, Stiltsville was so jammed that customers without reservations were turned away.

The restaurant, which seats about 100, features nautical décor with wood, bronze, and copper accents. Floor-to-ceiling windows offer a clear view of the Sunset Harbour dock. In the entryway, two ceramic bathtubs are filled with ice and fresh-caught fish such as snapper or grouper. Every hour, a bartender dumps in heaps of ice to maintain the chill.

Kevin Little, who worked with McInnis at Yardbird and Root & Bone, helms Stiltsville's kitchen as chef de cuisine. Originally from Maine, he brings New England-style panache to the restaurant and allows McInnis and Booth to run their other restaurants in different cities.

"My employees are my right and left hands," McInnis says. "If you treat your people well, it'll show. That's how all of this is really possible." About 115 pounds of seafood is delivered daily by fishermen from Key West, Key Largo, and Miami. Before opening for dinner at 5 p.m., the restaurant prints "Daily Catch" cards, which list each fish, the type of preparation (baked, grilled, seared), and a few descriptors, such as "flaky," "sweet," "subtle," or "medium firm."

Such a large delivery results in piles of leftover fish belly and tongue, which McInnis and company smoke by burning pieces of tail, rib, and other organs in a smoker with cherry wood and charcoal and then combine with onions, scallions, and garlic to make fish dip ($9). The result is satisfying. Though each batch is made with the parts of five or six fish, there's no piscine flavor. Served with saltines, the dip leaves a pleasantly smoky aftertaste.

Next comes the smokin' Havana scallop ($11), which is the only item on the menu not locally sourced. Because of Florida's limited scallop season, McInnis buys them from northern Virginia. Served in pairs, the scallops are placed on a bed of Cuban-tobacco-smoked plantain hash, similar to mofongo, and garnished with "mermaid bubbles," a purée of key lime and herbs. The hash, which is smoked with cherry wood, orange juice, cream, and tobacco, complements the scallops' rich flavor and silky texture. The savoriness redeems the small portion size but leaves you wanting more.

Another notable small plate is the cobia tiradito ($15), which includes thick slices of raw fish layered atop a puddle of lime-green ají amarillo and ginger. Cubed avocado and onion are mixed with hominy and popped corn. Though the popcorn seemed stale, the cobia was impeccably fresh.

McInnis' famed fried chicken ($22 to $39), which was served at Yardbird and is available at Sarsaparilla Club, makes an appearance as a Stiltsville entrée. Brined for 24 hours with bay leaves, citrus, and a pinch of fennel, the bird is crunchy on the outside, moist in the center, and faintly tangy. It's well worth a try despite the restaurant's seafood focus.

A similar seasoning is used for the crisp whole snapper, nicknamed "big fish for two" ($50 to $65). The three-pounder is submerged and fried whole, producing an odd bend in the snapper's spine. When brought to the table, it's propped up as if it could leap off the plate. Its crisp shell yields an enjoyable taste, but its moist center falls flat on flavor.

The shrimp 'n' grits ($26), one of McInnis' more popular dishes at Yardbird, reappears here. Using a creamy base of stone-ground grits, he includes Creole sausage, melted tomatoes, sweet peas, and shrimp butter. The result is warm in texture, rich in flavor, and rather heavy. It requires a hefty appetite and might affect your ability to savor anything else.

There is also a surf 'n' turf burger, for which thick cuts of butter-poached lobster and grilled beef are layered beneath black garlic and kale ($36). The sandwich's massive size and generous amount of meat justify the price, and McInnis and Booth's dash of horseradish rémoulade might even leave you with a smile.

Their cocktail program, led by Chicago transplant Sergio Campos, includes a dozen options, all fairly priced between $12 and $14. The Stone Fruit Reviver stands out. It's a classic gin cocktail containing lemon juice, apricot liqueur, and peach bitters. The flavor is light and bright. There's also a bounty of sweet, nonalcoholic house-made drinks, including a fizzy sour orange and mint, and a passionfruit and pineapple ginger beer.

For dessert, try the gooey chocolate cobbler ($11); a cup of water is added to the cast-iron skillet during preparation, creating a warm and decadent center. There's also coconut key lime pie with a made-from-scratch graham cracker crust, which follows the restaurant's theme of incorporating key lime zest into as many items as possible. It's a safe and consistent choice for a sweet finish.

As Sunset Harbour's newest restaurant, Stiltsville Fish Bar joins an impressive lineup of chef-driven concepts, including Pubbelly Noodle Bar, NaiYaRa, Soul Tavern, Lucali, and Sushi Garage. Even so, Stiltsville shines. It's one of the only restaurants around that serves off-the-boat seafood while maintaining a swanky vibe. The question that remains is how McInnis and Booth will handle four restaurants in three cities.

"It's kind of like having a newborn baby," McInnis says. "The newborn gets a little more attention than the other kids, but you still wind up feeding everyone every day."