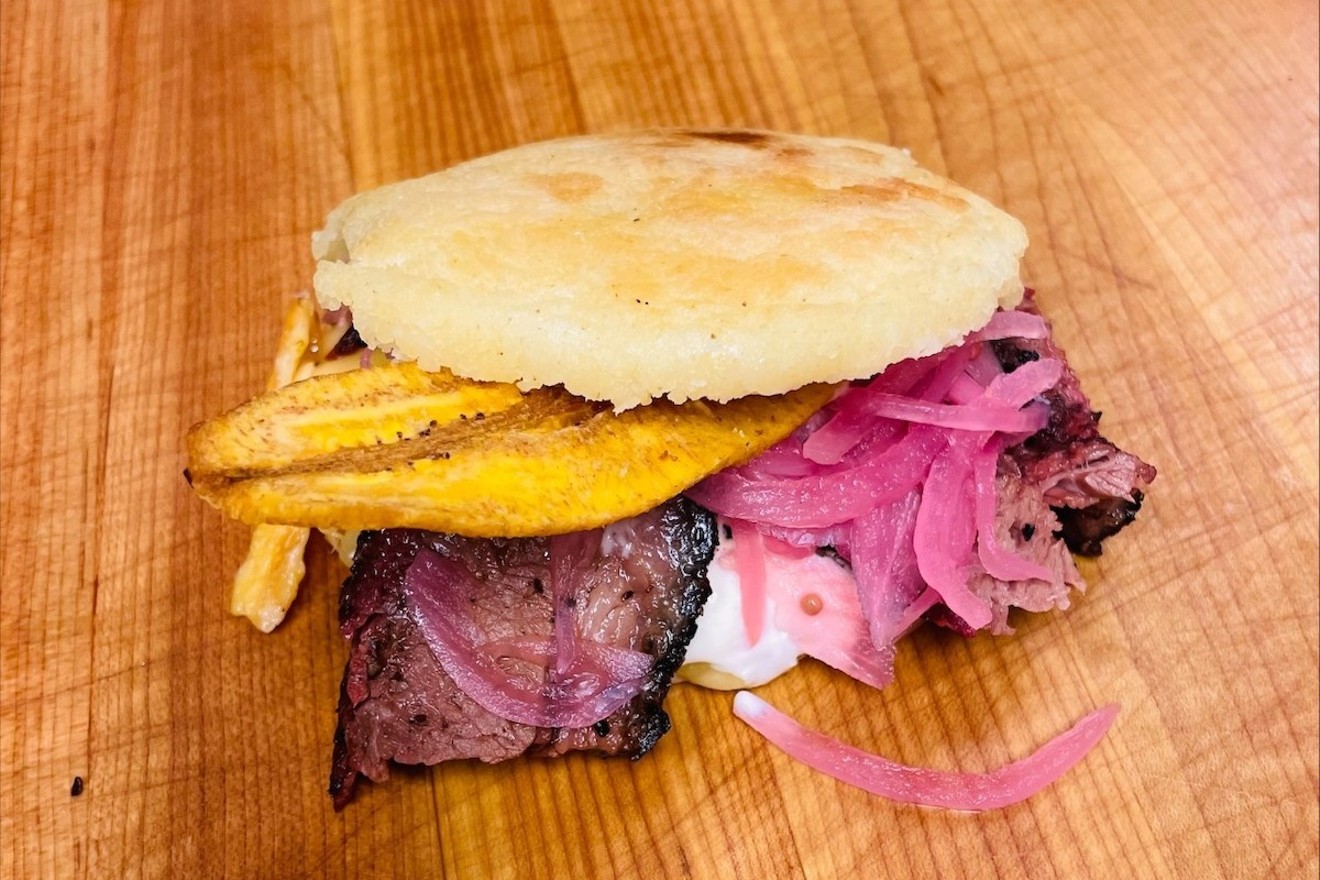 Husband and wife Harry and Michelle Coleman opened their West Kendall empanada bakery in 2017 after running Charlotte Bakery in Miami Beach for more than a decade. They decided their next project would involve hot dogs and what they call "Miami-style" barbecue, which incorporates ingredients from the many cultures that inhabit the city. The Colemans eventually signed a lease for the space next door to Empanada Harry's.

That was almost three years ago.

Then COVID hit and significantly slowed construction and the permitting process. In the meantime, the couple opted to set up a smoker in front of Empanada Harry's and sell barbecue on Sundays.

The pop-up was an immediate hit. The lines for meats such as the cafecito-rubbed brisket and baby back ribs in guava sauce were long, and the demand helped ease any fears the couple harbored about opening a restaurant amid a pandemic. After all, many restaurants were struggling to survive at the time, including their own.

“The barbecue did so well that it kept Empanada Harry's afloat,” Harry Coleman tells New Times. “The weeks were slow, but fortunately, we didn’t have to lay anybody off. We did [barbecue] take-home packages, and that helped us hold down the fort until things picked up.”

The brick-and-mortar version of Smoke & Dough finally opened to the public on January 20. There are no hot dogs on the menu — that idea was scrapped owing to the overwhelming success of the barbecue. But there are tapas, in addition to the barbecued meats. Most menu items are smoked or include dough in some form (hence the name Smoke & Dough). And they're just as creative as the concoctions that made Empanada Harry's — home to 40 or so varieties of empanadas — unique.

The aforementioned brisket ($17) is served with a side of chimichurri sauce and incorporates Cuban cafecito into its rub. This helps give brisket that has been smoked for 15 hours that desirable dark bark, but it does not impart a coffee flavor. Cuban influence can also be found in the timba sausage link ($8), which consists of brisket, sweet guava, and creamy white cheese.

Coleman was born to Chilean parents in Venezuela and gives a nod to his birth country with his selection of four barbecue sandwiches, whose fillings are stuffed into arepas rather than arranged between slices of bread. While one typically expects bread to do little more than hold the sandwich together, a smoked pulled-pork arepa topped with slaw and guava barbecue sauce ($12) surprised with the flavor and texture of the area itself. 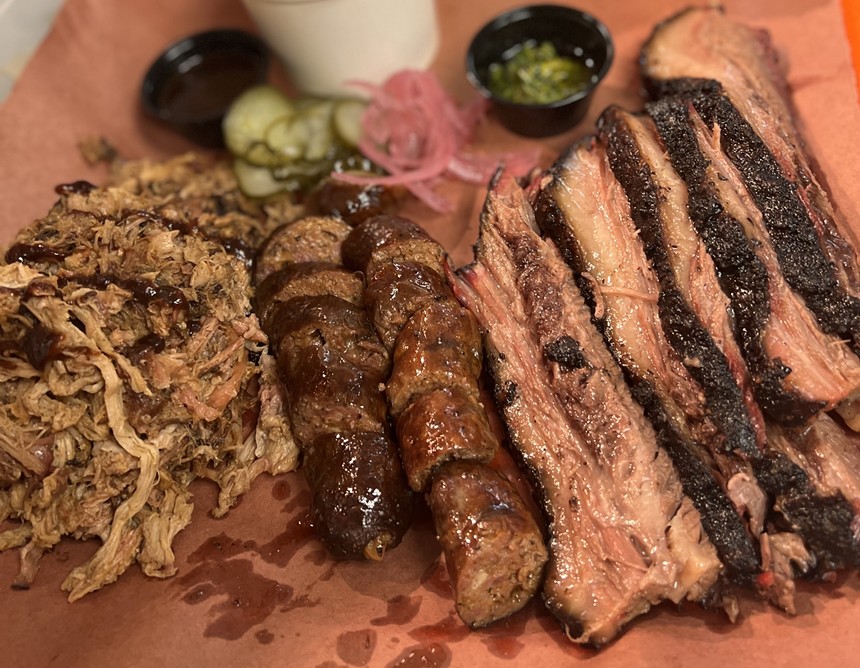 Smoke & Dough's meat selection includes pulled pork, timba sausage, and cafecito-rubbed brisket.
Photo courtesy of Smoke & Dough
And then there are the tapas — a real source of pride for Harry Coleman. They can be ordered as an appetizer or side for your main course, or they can stand alone. Tapas options include pisco-cured Chilean salmon toast ($13), smoked charcuterie duck with pickled mustard seeds ($13), and double-smoked ham and Gouda croquetas ($12).

"We wanted to go a little gourmet," Coleman says. "Barbecue meats are pretty good because there are pitmasters doing them, but the sides tend to lack because they're not chefs. We wanted to do sides that are just as good as the meats."

The Colemans plan to mix the menu up to keep things fresh. They want to serve Puerto Rican mofongo on Fridays and a brunch featuring eggs Benedict on Sundays. And there might be a smoked item of the month that will go beyond meat.

As for the restaurant's décor, that was all the Colemans' doing as well. With its bovine skulls and hides adorning the walls, it's unmistakably barbecue. But there are personal touches too, such as the photos taken by the couple themselves and a mural Michelle Coleman painted in the private event space.

You'll find both Colemans regularly working at Smoke & Dough — Michelle at the front counter and Harry in the kitchen. They say there are no other investors or partners in the restaurant, making this an honest-to-goodness mom-and-pop establishment.

"Harry and I are kindred spirits," Michelle says. "This is our vision, 100 percent. It's the perfect dynamic. A lot of people don't understand how we do it. But we're as good partners in our business life as we are in our personal life."

Harry picked up barbecuing five years ago, and then he and Michelle visited barbecue hot spots across the South to help hone his craft. He says Smoke & Dough is most influenced by Texas and points out that the majority of barbecue restaurants in Miami — not a town famed for its barbecue — draw their inspiration from the Lone Star State. But it's his hope that Smoke & Dough separates itself with its Miami-style spin.

It's a term that Harry often uses when discussing the restaurant's fusion cuisine, even if it is more of a buzzy description than an actual category. "It doesn't exist," Harry admits, laughing.

There are no guidelines for Miami-style barbecue. At this point, Harry and Michelle are making up the rules as they go. They say it's more fun that way.

Smoke & Dough. 4013 SW 152nd Ave., Miami; 786-362-5698; smokeanddough.com. Wednesday and Thursday noon to 9 p.m., Friday and Saturday noon to 9:45 p.m., and Sunday 10 to 4 p.m.
KEEP MIAMI NEW TIMES FREE... Since we started Miami New Times, it has been defined as the free, independent voice of Miami, and we'd like to keep it that way. With local media under siege, it's more important than ever for us to rally support behind funding our local journalism. You can help by participating in our "I Support" program, allowing us to keep offering readers access to our incisive coverage of local news, food and culture with no paywalls.
Make a one-time donation today for as little as $1.