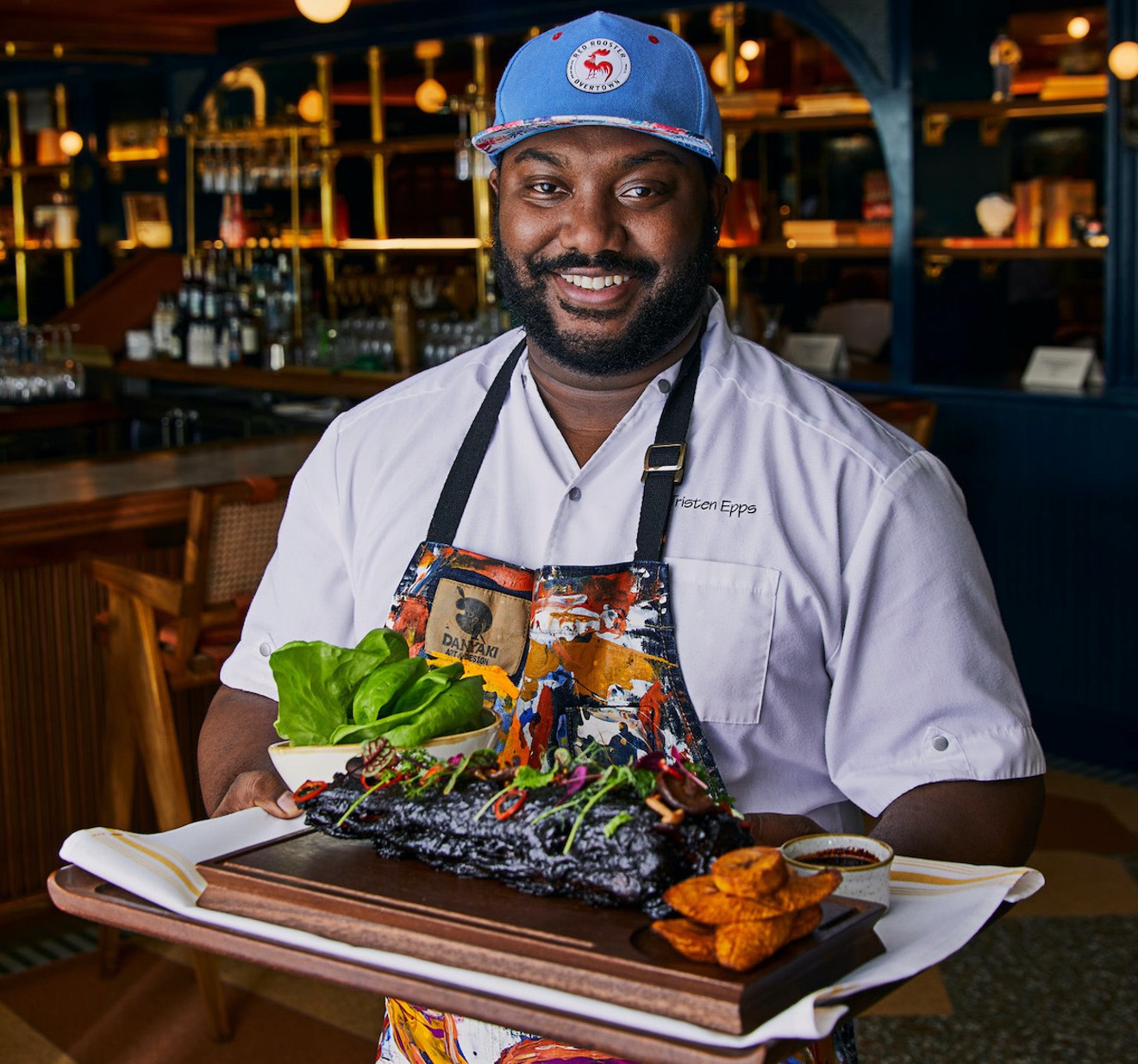 "It's a warm, sultry night in Miami in the 1960s. Muhammad Ali and Aretha Franklin walk into the room. Ali is wearing a light linen shirt and impeccably pressed pants. His shirt is unbuttoned halfway, and the sleeves are rolled up. Miss Aretha is wearing a dress that sparkles. And, even though it's Miami in the summer, she's wearing a fur. They walk in arm-in-arm and the restaurant just stops. All eyes are on them because they are royalty."

Fleming describes the imagined entrance as if he were actually being transported back to the days when Ali was the greatest of all time, Aretha was the queen of soul, and Overtown was the thrumming pulse of Black culture in Miami.

Fleming is partner of Red Rooster Overtown and, along with Miami's Grove Bay Group, opened the Overtown offshoot of New York City's popular Red Rooster Harlem after an extended delay caused by the COVID-19 pandemic.

The restaurant, which opened this past December, stands on the site of Clyde Killens’ legendary pool hall, where Count Basie, Duke Ellington, Ella Fitzgerald, Sam Cooke, and other Black legends would hang out after performances at the Lyric Theater across the street. Muhammad Ali and Aretha Franklin were also seen at Killens and might even have strutted in together, arm-in-arm on one particular evening.

Some believe that a building can retain residual energy from past moments. Walk into Red Rooster, and you might agree. The bar, dining room, and outdoor patio are filled with a mix of colors and textures. Take a closer look and you'll see artworks by Rashid Johnson, Mickalene Thomas, Kara Walker, and other African-American artists, mixed in with memorabilia celebrating the people who flocked to Overtown when it was in its prime.


"People will be dying to see Red Rooster in Florida. It's not re-creating Overtown, it's picking up where we left off."

On a recent afternoon, Donnamarie Baptiste, who serves as director of culture and arts for the restaurant, gave Bea Hines a tour before lunch. Hines, who's 83, is a Miami historian and was the first Black woman to work as a reporter for the Miami Herald. Born in Williston, Florida, in 1938, Hines moved to Overtown at age 5 when her mother fled an abusive marriage. Hines recalls growing up just a few blocks from the pool hall where Red Rooster now stands. Asked whether she ever visited Killens' place back in the day, she said "nice girls" didn't go there — though she did share one memory: "I was walking past the pool hall and I saw this beautiful blue Cadillac. The door opened and out popped Nat King Cole."

Hines can recount many memories of an Overtown filled with music and Easter parades and church choirs. It's a far cry from the neighborhood's subsequent reputation. Bounded roughly by NW 20th Street, NW Fifth Street/North River Drive, N. Miami Avenue, and NW 12th Avenue, with a chunk west of Interstate 95 cut out of that would-be square for the Jackson Hospital complex, the area known as "Colored Town" and, later, "the Central Negro District," was hobbled in the 1960s when it was drawn and quartered by the construction of I-95 and the Dolphin Expressway. At one time a thriving Black community of more than 30,000, Overtown currently logs a population of 8,300.

If Red Rooster Harlem is any indication, the arrival of the Overtown location bodes well for the neighborhood. After the coronavirus descended on New York, Red Rooster Harlem partnered with World Central Kitchen to provide meals to locals in need. Red Rooster Overtown did the same — before it even opened for business. And like its NYC sibling, the Overtown Red Rooster has a stated commitment to hire from within the community

Despite the ongoing issues involved in operating a restaurant amid a pandemic, the growing availability of vaccines is lightening the mood at Red Rooster, providing a welcome undercurrent of energy on the outdoor patio. Diners of all ages, colors, walks of life are enjoying the food prepared by chef de cuisine Tristen Epps, whose menu hits both Caribbean and Southern culinary notes.

"There are things old and new I want to highlight," Epps tells New Times. "I wasn't around in the 1950s, but I don't imagine a lot of caviar came through here."

What was served? Whole fish, deviled eggs, and oxtail.

The dining room at Red Rooster Overtown.
Photo courtesy of Alchemy Agency
"I think there isn't a Black person who doesn't have a connection to oxtail. It was a poverty dish, but it shows history in the most elegant way," says Epps, who recently created a menu to celebrate Black History Month that included African-American, Caribbean, and American Southern dishes. That menu, Epps explains, followed the slave trade. "There was no South without the slave trade."

Epps, who makes ample use of greens from Red Rooster's hydroponic garden, sees the ever-changing bounty as a metaphor for Overtown itself.

"For me, it speaks to the transformative nature of what we are," he says. "What might be available today might not be available tomorrow. We have the ability to restart and also to push ourselves to be the best representation of our culture. The neighborhood should be a model for Black excellence. We're partners in that."

Donnamarie Baptiste notes that Overtown is already undergoing changes. For one thing, Wynwood, once a neglected neighborhood, is creeping southward toward its border with Overtown.

"Change is inevitable and change can be a good thing," says Baptiste. "Overtown won't look like it does now in five years, but there will be Black and Brown people here. The hope — the intention — is that the community can, once, again, offer the best of Blackness and Brownness."

Baptiste points out that in the past, tourists flocked to Overtown.

"That will happen again," she says. "Marcus [Samuelsson] already has his following. People will be dying to see Red Rooster in Florida. It's not re-creating Overtown, it's picking up where we left off."

In Bea Hines' view, where Overtown "left off" was a neighborhood where people could attend church and then listen to Lena Horne perform. Where students at Booker T. Washington Senior High were treated to screenings of Carmen Jones and talks by Tuskegee Airmen during assembly.

Derek Fleming says that once the restaurant's upstairs lounge gets built out and it's safe once again for people to congregate at bars, music will return to Overtown.

"This is really an evolution of engagement. This space is for everyone. How often do you have that in Miami?"

Though not completely redone, the space is already lined with dark wood paneling, the bar padded with green Naugahyde. The décor is 1940s pool-hall chic, a tribute to its past proprietor, Clyde Killens. As he proudly leads a quick tour of the as-yet-unfinished room, Derek Fleming is once again transported to another time and place. This time, it's the near future. He sways gently on his feet he paints the picture.

"Imagine: It's 2 a.m. and you had dinner at Rooster and you're upstairs listening to some music and having drinks. Your friend texts you and asks where you are and you tell them you're having this amazing time in Overtown.

"This is really an evolution of engagement," Fleming says, absorbed in his reverie. "This space is for everyone. How often do you have that in Miami?"

Can one restaurant alter the trajectory of a neighborhood?

Bea Hines believes it can provide a spark.

"I would like to hear music in Overtown and I would like to see our churches filled again," she says. "I want to always have pride in our history and our culture. I don't want to see that die. Derek and his partners have thought this through. And this is where our future lies."

Red Rooster Overtown. 920 NW Second Ave, Miami; 305-640-9880; redroosterovertown.com.
KEEP MIAMI NEW TIMES FREE... Since we started Miami New Times, it has been defined as the free, independent voice of Miami, and we'd like to keep it that way. With local media under siege, it's more important than ever for us to rally support behind funding our local journalism. You can help by participating in our "I Support" program, allowing us to keep offering readers access to our incisive coverage of local news, food and culture with no paywalls.
Make a one-time donation today for as little as $1.