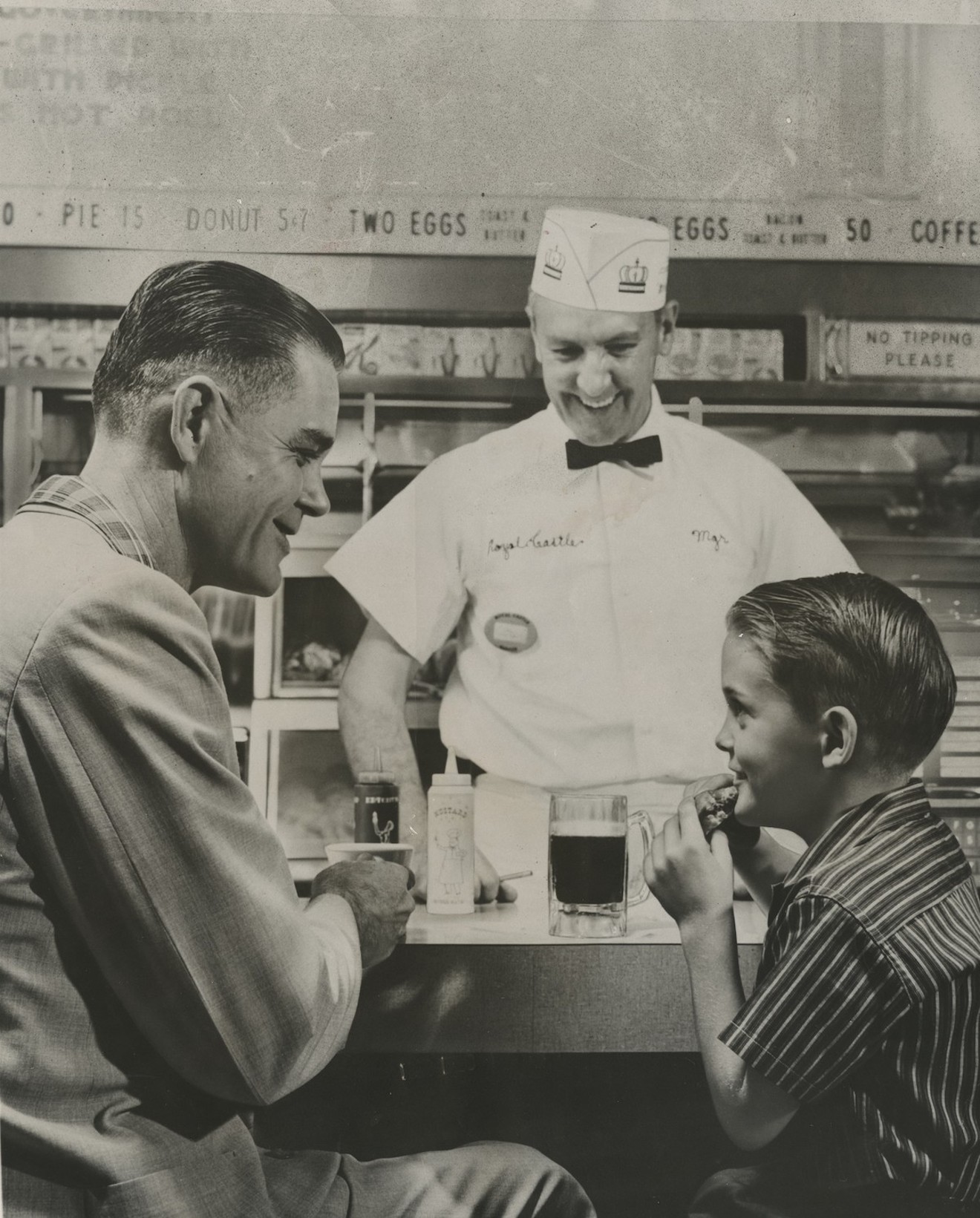 A father and son at a Miami Royal Castle, circa 1957. Photo courtesy of Miami News Collection, HistoryMiami
When you think of Miami's food scene, your thoughts probably go to the Cuban sandwich and stone crabs. But Miami has a long and fascinating history with one of America's most iconic sandwiches: the burger.

We'll likely always have Burger King. But over the past century, a surprisingly large number of chain restaurants have attempted to hit it big in the Miami burger-sphere and missed, including well-known names like A&W Drive-In, Hardee's, Howard Johnson's, Roy Rogers, and, perhaps most infamously, White Castle. Plenty of obscure burger joints have given South Florida a shot as well, including names like Dog 'n Suds, Henry's Hamburgers, Sambo's, and TropiBurger.

More recently, chains like Five Guys and Shake Shack have thrived in Miami and standbys like McDonald's (which made its first appearance in Miami during the early 1960s) and Wendy's (which arrived in Miami in the late 1970s) have cemented themselves as part of our fast-food culture.

Though Miami isn't California or Ohio with a deep history of drive-ins, mom-and-pops, and burger restaurants that have spread nationwide, it has had its share of memorable burger joints over the years.

Local burger gems that disappeared but were once part of the comfort food landscape in the 305 include places with names like Circus Wagon, Hamburger Circus, Paramount Soda Shop, Crown Burger, and Burger Farm. Royal Castle, once a thriving chain, is the only one of these chains still alive, with one Miami location remaining.

Some burger joints, however, stand out. Long before there was Wahlburger's, our city was home to not one — but two — celebrity-driven burger restaurants. Two current Miami hospitality veterans also had local burger chains here. And, one of the world's most well-known burger chains has a place in Miami's history.

Here are the five most interesting burger chains that will forever be etched in Miami's history.

This franchise location, run by David Edgerton and James McLamore, would grow to four restaurants by the end of 1955. When the parent company ran into financial difficulties, Edgerton and McLamore took over. The early 1960s saw them drop the "Insta" from the name and refocus on propagating Burger King nationwide.

The building that housed the first Burger King in Miami is gone, but store "number two" is still around. It still resembles its 1950s self with a walk-up order window.

It has since exchanged selling burgers for frita cubanas, croquetas, and churros. You may know it better as La Palma. 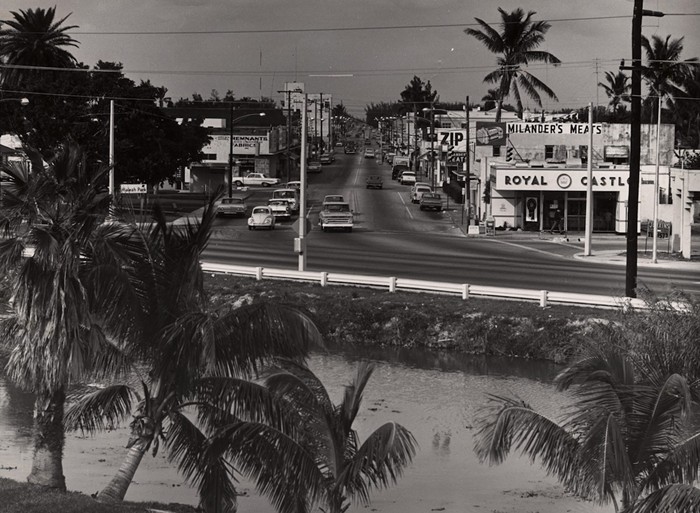 A Royal Castle at the intersection of Palm Avenue and Okeechobee Road in Hialeah. (Only one Royal Castle remains of the once-thriving chain, at 2700 NW 79th Ave. in Miami.)
Photo courtesy of Miami News Collection, HistoryMiami

One of the biggest names in football in the 1960s and '70s was Joe Namath, AKA Broadway Joe. Blessed with movie-star looks and a flamboyant personality to match, Namath is best known for leading the New York Jets to victory over the Baltimore Colts in Super Bowl III at the Orange Bowl in 1969.

The restaurant chain quickly grew to include 11 locations, but its success was short-lived after Namath left the company in 1970.

In 1968, Muhammad Ali licensed his name and likeness for a black-owned and -operated burger chain called ChampBurger. The first location opened at 3268 Grand Ave. in Coconut Grove.

Ali's contract specified that all the food served would contain no pork or shellfish, in keeping with his Muslim beliefs. In addition to burgers, ChampBurger offered all-beef hot dogs, fried chicken, and its own "Mr. Champ" soda.

Later that year, a second location opened at 6155 NW 17th Ave. Unfortunately, the end was near. Issues with investors and a court case with stockholders derailed the restaurant financially and it never recovered. 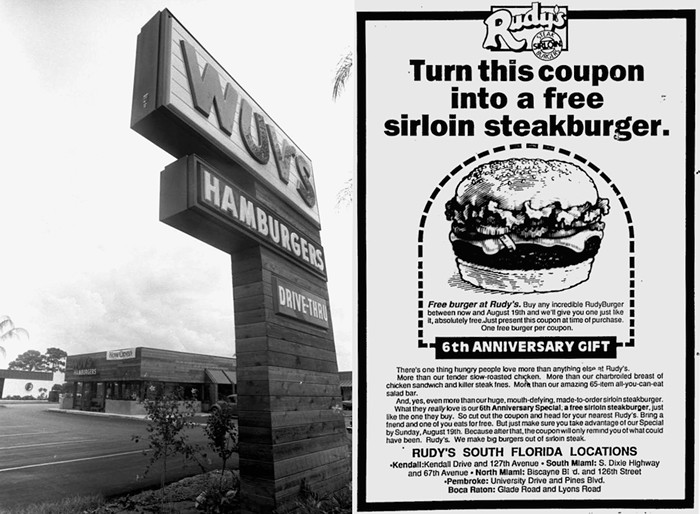 The 1980s saw the "Burger Wars" among McDonald's and its two closest competitors, Burger King and Wendy's, which were battling it out for second place. While that was going on, a "Better Burger Movement" with a fast-casual restaurant atmosphere was gaining momentum out of Texas.

Houston's Fuddruckers was slowly spreading across the U.S. And though there were a few Fuddruckers in Miami,  we had our own superior version in Rudy's Sirloin SteakBurgers.

The founder of Rudy's was Douglas Rudolph. Douglas was already involved in the Miami burger scene: In 1977, he brought Wendy's to Miami.

But Rudy's burgers were different from Wendy's. They were made from freshly ground sirloin and charbroiled. Each restaurant also offered a toppings bar.

Rudy's Sirloin SteakBurgers was sold to a Miami real estate developer and some European investors. Their planned expansion in 1991 never materialized, and Rudy's disappeared.

Douglas Rudolph, however, stayed in the burger game. He and his son, Alex, are currently part of the Tap 42 restaurant chain. 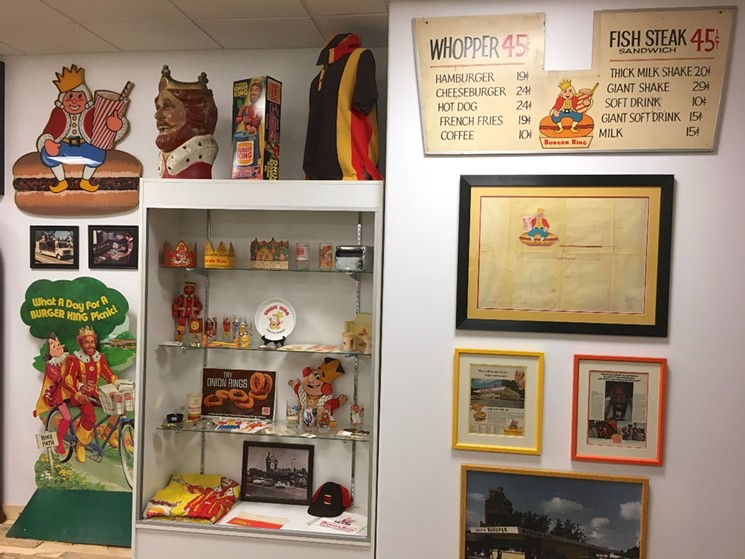 While burger chains in the 1970s were switching from fresh beef to frozen, a McDonald's franchisee had the idea to bring back fresh meat. Jack Penrod, of Penrod's and, later, Nikki Beach fame, opened Wuv's, which operated from 1975 through 1981.

Wuv's would expand to more than 15 states but would eventually file for bankruptcy in late 1981. In an interview with the New York Times, Penrod explained the chain's failure: "We got ourselves in a hole, and we can’t get out of it."

Sef Gonzalez is the fella behind the Burger Beast blog. He is a published author (All About the Burger), event creator and curator (Hamburger House Party & Croqueta Palooza), food historian, and Guinness World Record holder. Follow him on Twitter (@burgerbeast) and Instagram (@burgerbeast).
KEEP MIAMI NEW TIMES FREE... Since we started Miami New Times, it has been defined as the free, independent voice of Miami, and we'd like to keep it that way. With local media under siege, it's more important than ever for us to rally support behind funding our local journalism. You can help by participating in our "I Support" program, allowing us to keep offering readers access to our incisive coverage of local news, food and culture with no paywalls.
Make a one-time donation today for as little as $1.