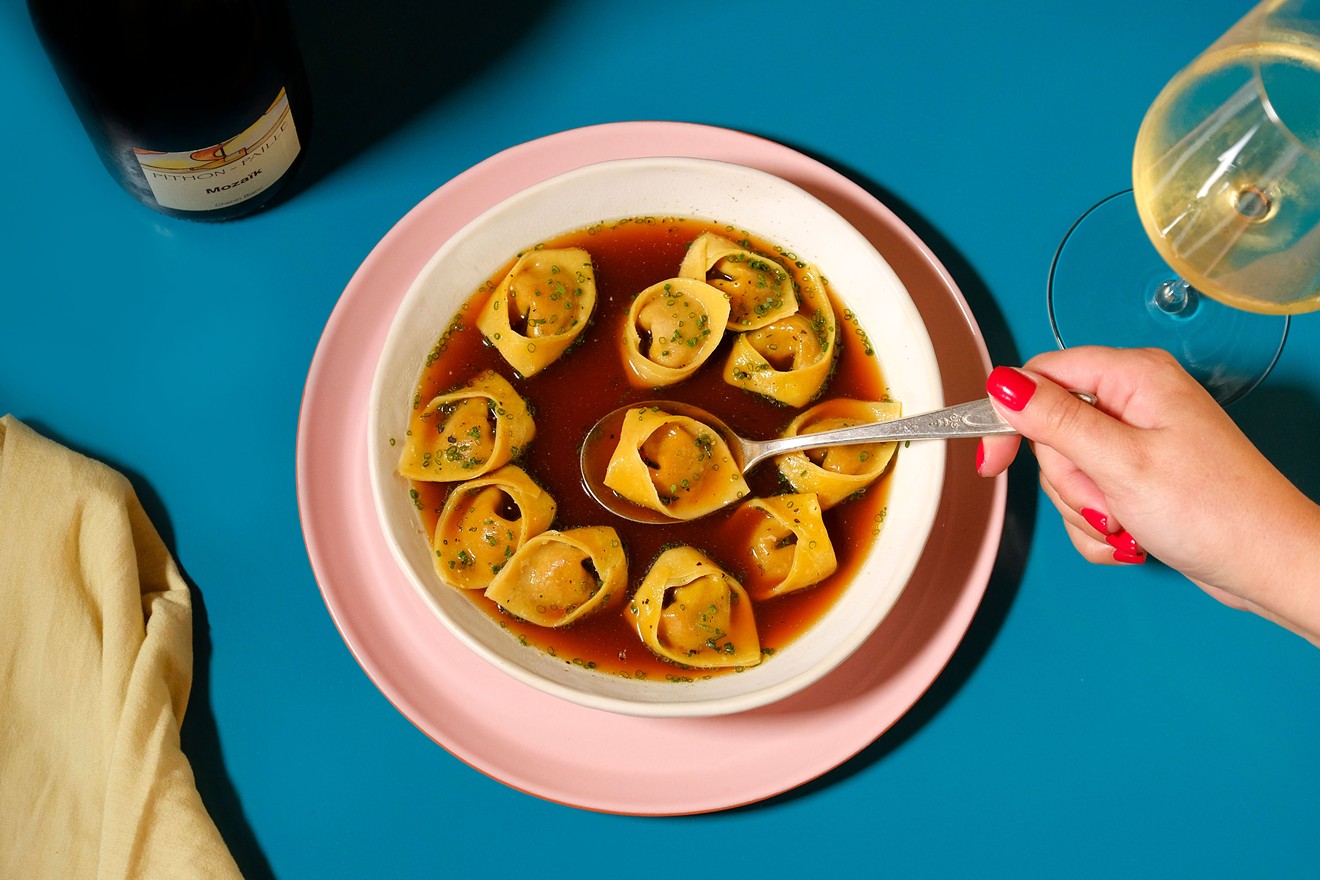 Tortellini en brodo Photo by FujifilmGirl
On NE Second Avenue in Little Haiti, knots of squid ink tagliolini ($28) are flecked with stone crab bound with a delicate fortified wine cream sauce perfumed by black truffles. The shocker is that it arrives cold — and is perhaps the most luxurious pasta salad you will ever eat. Such a dish seems out of place in a neighborhood beloved for its mornings filled with grits and steamed snapper, and days of crackly fried chicken and tender griot crowned with the spicy, slightly sour fermented cabbage condiment pikliz.

Yet Luciana Giangrandi and Alex Meyer's 24-seat Boia De — which after opening June 26 became one of Miami's buzziest restaurants — tacitly fits between a coin laundry and medical clinic, barely hinting at what waits inside.

The chefs, both 33 years old, made a quiet splash in 2017 when they opened their taco cart La Pollita in the Midtown Garden Center and later moved to a Design District side alley. The two quickly became known for their resumés, along with handmade tortillas and a variety of well-sourced fillings. 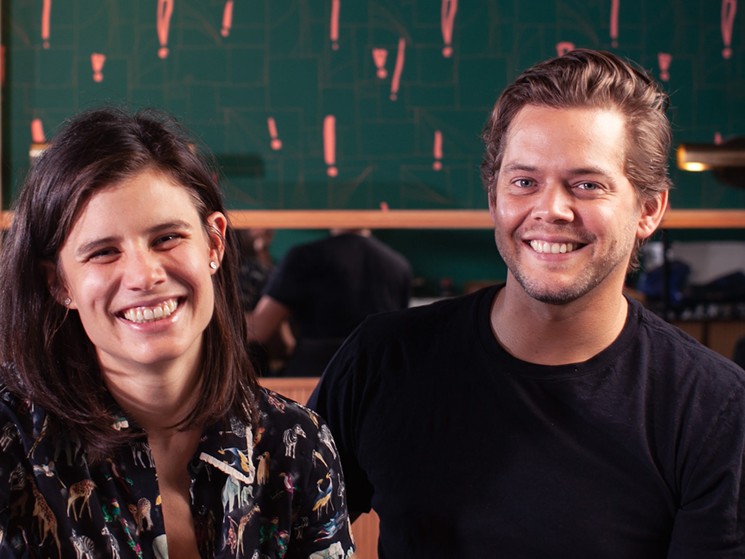 Luciana Giangrandi and Alex Meyer
Photo by David Bley
Giangrandi started out in the kitchen of Scott Conant’s Scarpetta in New York City. She later moved to the Eleven Madison Park team's NoMad Hotel, where she and Meyer met. She then went to Carbone, run by Rich Torrisi and Mario Carbone. Both restaurants earned Michelin stars in their first years with Giangrandi in the kitchen.

Now, in their first place, whose name loosely means "Oh, my" in the Italian city of Livorno, where Giangrandi visited often as a child, the two have called upon their training to create something that is both warm and inviting while boasting a degree of elegance and sophistication, all enveloped in pool-table-green walls. Boia De serves a litany of deceivingly familiar-sounding plates that arrive with an unfamiliar range of presentations and ingredients. The menu is a microcosm of the restaurant, which, despite prices that edge on the high side owing to uncompromising sourcing, is quietly drawing a new kind of clientele to a vibrant neighborhood now under threat of disappearing as billion-dollar developments loom.

Take, for instance, the almost ubiquitous hamachi crudo ($16). Though it's most commonly dressed up with acid and jalapeño, here Meyer and Giangrandi take a more Italian approach, accompanying each curved, buttery slice with an herbaceous salsa verde, sliced Fresno chilies, and fried capers for an acidic pop. The beef tartare ($16) cuts the same way with a pool of velvety tonnato sauce resting atop a disk of hand-chopped hangar steak, making each bite that much meatier. The idea here was to riff on classic vitello tonnato, in which cold slices of veal are topped with a tuna aioli, and the sensation is quite similar while feeling several degrees more luxurious.

It's even in the lamb ribs ($24), which in so many cases follow a more Mediterranean or Middle Eastern philosophy but here punt everything except a rich, piquant yogurt and again look toward the place's soft Italian focus. The slabs are rubbed with tomato powder, the spice blend peri peri, salt, and sugar and then dry-roasted. The rendered-out lamb fat is used to sauté heaps of onion and garlic later fortified with tomato paste, a much-needed splash of vinegar, and plenty of Calabrian chilies. The result is an intense fra diavolo sauce that in any other application would be overwhelming but in this instance is the perfect foil to the fatty, slightly gamey ribs.

However, any discussion of Boia De would be incomplete without mention of the nearly half-dozen or so pasta offerings, which are rolled out daily, filling the small space with billowing yellow ribbons and puffs of semolina.

asta squares and cannellini beans with middleneck clam
Photo courtesy of Boia De
If there's a signature dish, it's the tortellini en brodo ($23), which recently reappeared after a summer sabbatical. The curled, thumb-size pockets and accompanying broth take nearly three days to prepare and begin with an intense duck stock that's reduced into an aggressive concentrate later clarified to a beautiful autumn auburn. Arriving a spot-on al dente, the tortellini are stuffed with duck confit, shredded duck prosciutto, foie gras and a touch of nutmeg in a nod to the classic.

Other offerings appear less decadent, but don't be fooled. Pillowy ricotta gnocchi ($17) are enveloped in a tangy fresh tomato sauce that achieves incredible complexity with little more than chilies, basil, hot pasta water, and a pat of butter. It is not to be missed. Neither is the pappardelle alla lepre ($22), with unctuous shreds of braised rabbit tangled amid wide ribbons of pasta; nor the pasta squares and cannellini beans ($18) highlighted with salty middleneck clams scattered across the plate, all slicked with a pork cheek fat-infused Parmesan broth.

The dish recalls an early, seminal experience when the combination of linguine, clams, white wine, butter, garlic and parsley revealed themselves to be much more than they seemed. Meyer and Giangrandi, with the help of wine director Bianca Sanon — who curated an interesting, approachable list of wine including many fashionable natural choices — have done something similar. The best recommendation is to visit over and over before favorites disappear and to see what new tricks they're playing on classics.

Boia De. 5205 NE Second Ave., Miami; 305-967-8866; boiaderestaurant.com. Sunday through Thursday 5:30 to 10:30 p.m., Friday and Saturday 5:30 to 11:30 p.m.
KEEP MIAMI NEW TIMES FREE... Since we started Miami New Times, it has been defined as the free, independent voice of Miami, and we'd like to keep it that way. With local media under siege, it's more important than ever for us to rally support behind funding our local journalism. You can help by participating in our "I Support" program, allowing us to keep offering readers access to our incisive coverage of local news, food and culture with no paywalls.
Make a one-time donation today for as little as $1.