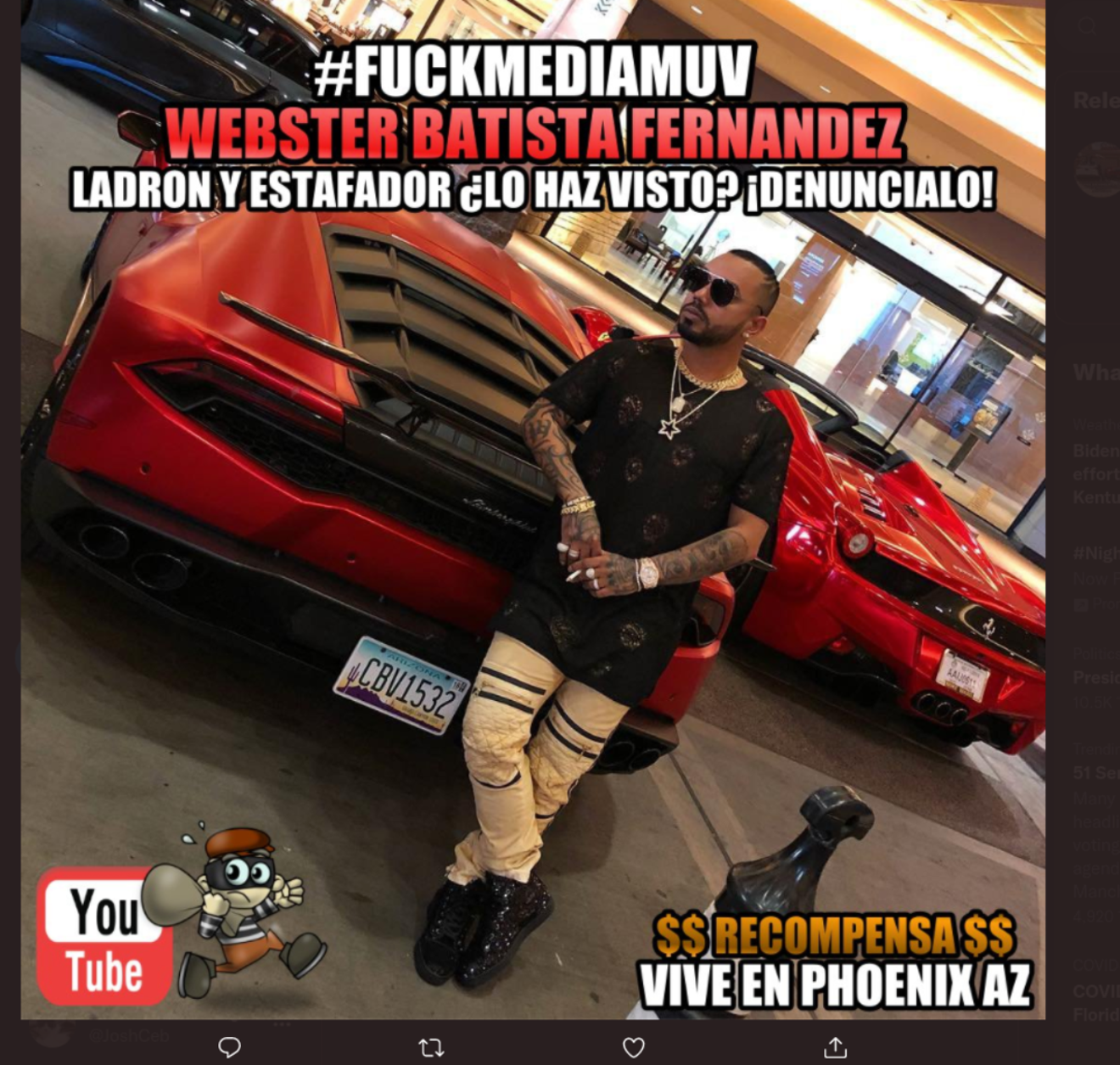 Webster Batista must forfeit the luxury sports cars he owns as part of a guilty plea agreement filed last week. Screenshot via @fuckmediamuv Twitter
Last week, a prolific scammer who allegedly raked in an estimated $20 million in a years-long YouTube royalties scam has pleaded guilty to two felony charges in federal court and will now have to forfeit his sports cars and real estate properties.

Webster Batista was arrested last November in Doral and ordered by a federal judge to remove himself to Phoenix, Arizona, to await trial alongside his alleged co-conspirator, Jose Teran. The pair, who were dubbed "ladrones de contenido en YouTube" — YouTube content thieves — were accused of fraudulently claiming ownership of thousands of songs and sending bogus copyright claims to YouTube content creators who used those tracks, raking in $20,776,517 from 2017 to 2021 without paying a penny to the original artists. A grand jury indictment charged Batista with 15 counts of wire fraud, seven counts of money laundering, and seven counts of identity theft, as well as a single count of conspiracy.

In Batista's plea agreement, filed last Thursday, he pleads guilty to two of the 30 counts levied against him: one felony count of conspiracy and one count of wire fraud. In the agreement, Batista stated he would forfeit his five-bedroom property in Phoenix, Arizona, a 2017 Tesla X 100D, a 2014 BMW i8, and nearly $1 million seized from various bank accounts.

"Sometime in 2016, I discovered there were recorded songs of musicians and bands on the internet that were not being monetized. I began searching for these songs and uploading them to [YouTube] as mp3 files," Batista states in his plea agreement, which has been embedded at the end of this story. "I falsely claimed legal ownership over them and began receiving royalty payments."

As part of the plea agreement, Batista admitted that he created a fictitious entity called MediaMuv in Arizona for the purpose of fraudulently monetizing music on YouTube, and that he falsely claimed MediaMuv owned the royalties to more than 50,000 songs from an array of genres, including Spanish songs ranging from the 1970s to the early 2000s, as well as music from the popular visual-novel game Doki Doki Literature Club.

In a video published about MediaMuv last December after Batista and Teran were arrested, YouTube user Mental Outlaw explained how the pair manipulated YouTube's content-identification system, which uses computer software to identify licensed music used in videos posted on the platform, and highlights a serious weakness in the platform's copyright policy.

Batista faces a maximum of five years imprisonment for his felony conspiracy charge, and a maximum sentence of 20 years for felony wire fraud. In his plea agreement, Batista's attorneys stipulate that in exchange for his plea, the faux-media mogul be sentenced based on the lower range of the court's sentencing guidelines. On top of his asset forfeiture to the court, Batista agreed to pay up to $25 million in restitution to victims.

The defense and the prosecution agreed to the terms of Batista's plea agreement last Thursday, and it is now up to U.S. District Judge Douglas L. Rayes to accept the terms of the agreement.

Batista's co-conspirator, Teran, pleaded not guilty to all charges against him last December and has not changed his plea.