Today, more than a year since Korten alerted the State Attorney's Office that its own case files could exonerate James, prosecutors asked the court to vacate James' life sentence and free the 55-year-old Miami native.

"I'm so very pleased," Korten said through tears when New Times reached him by phone. "It was as amazing as abominable to realize that our system could just jump the rails like that completely — I mean, just pick up a random guy and run him through the system and sentence him for life."

How does a man wind up in prison for 31 years for a crime he did not commit?

As Korten revealed in "The Tragic Case of the Wrong Thomas James," it was a case of mistaken identity that dated all the way back to the January 1990 murder of Francis McKinnon in Coconut Grove.

After two men stormed into an apartment and fatally shot McKinnon in the process of stealing roughly $300, a witness at the scene told Metro-Dade police (now Miami-Dade police) that a man named "Thomas James" was involved. Investigators believed they found their killer when Thomas Raynard James was brought in on an unrelated gun charge.

Thomas "Tommy" James and Thomas Raynard James are Black men who are around the same age and were living in Miami-Dade County at the time. But as Korten uncovered through decades-old records and scores of interviews, Tommy James was a friend of one of the other murder suspects, whereas Thomas James had no connection to the case, nor any history of violent crime.

Despite Thomas James' insistence that he was innocent, the 23-year-old was tried, convicted, and sentenced to life in prison on the basis of flimsy eyewitness testimony, despite an utter absence of physical evidence. 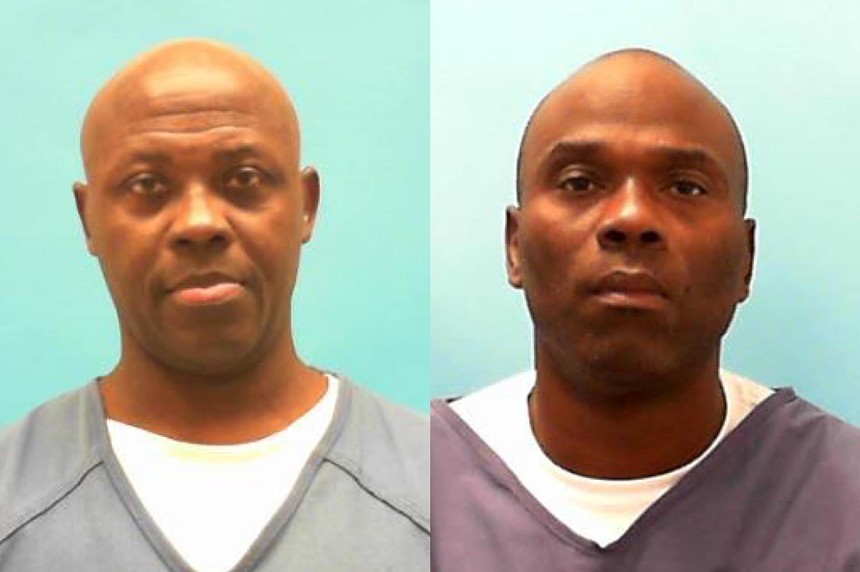 Thomas Raynard James (left) and Thomas "Tommy" James
Photos via Florida Department of Corrections
During his investigation, Korten interviewed Tommy James, who acknowledged that he knew the people who'd planned the robbery and that his near-namesake was innocent.

"Let the other Thomas James know I feel for him," Tommy James told Korten. "I’m sorry this happened."

The decision to vacate James' sentence came after the chief eyewitness to the 1990 murder, Dorothy Walton, told investigators in a sworn statement earlier this month that she erred when she identified Thomas Raynard James as the man who fired the fatal shots more than 32 years ago.

"Today we are undoing an injustice that was an unintentional wrong," Fernandez Rundle told those assembled.

She said the Miami-Dade State Attorney’s Office Justice Project, which examines wrongful convictions, spent the past year reviewing tens of thousands of pages of documents, re-interviewing old and new witnesses, and testing samples for possible DNA matches in the case.

Noting that the case went through appeals, post-conviction reviews, and reviews by a private investigator and the Innocence Project of Florida Inc., Fernandez Rundle said, "None were successful in finding Mr. Thomas Raynard James innocent until we got involved."

Investigators' most likely suspect in McKinnon’s murder, the state attorney concluded, "died without ever being held accountable."

Today was an emotional day for Thomas James and for his mother, Doris Strong, who attended the press conference.

So too for Korten.

"There were a lot of concerns in the community that [the State Attorney's Office] was taking too long. I was worried too," Korten says. "But you can't argue with the results. They did the right thing."

He says that people often read or hear about wrongful convictions but to experience one in minute detail was something else entirely.

While James' sentence has been vacated, it remains unclear precisely when he'll walk out of prison. Korten says James has two cousins who have not let his case rest and a "very sweet mother" who is patiently awaiting his return home.

Korten was a New Times staff writer from 1998 to 2005 and reported the story for GQ in 2020 while still living in Miami. He moved with his family to New England last year.
KEEP MIAMI NEW TIMES FREE... Since we started Miami New Times, it has been defined as the free, independent voice of Miami, and we'd like to keep it that way. With local media under siege, it's more important than ever for us to rally support behind funding our local journalism. You can help by participating in our "I Support" program, allowing us to keep offering readers access to our incisive coverage of local news, food and culture with no paywalls.
Make a one-time donation today for as little as $1.