The President Just Gave a Shout-Out to Blacks for Trump, the Group Tied to a Miami Cult Member 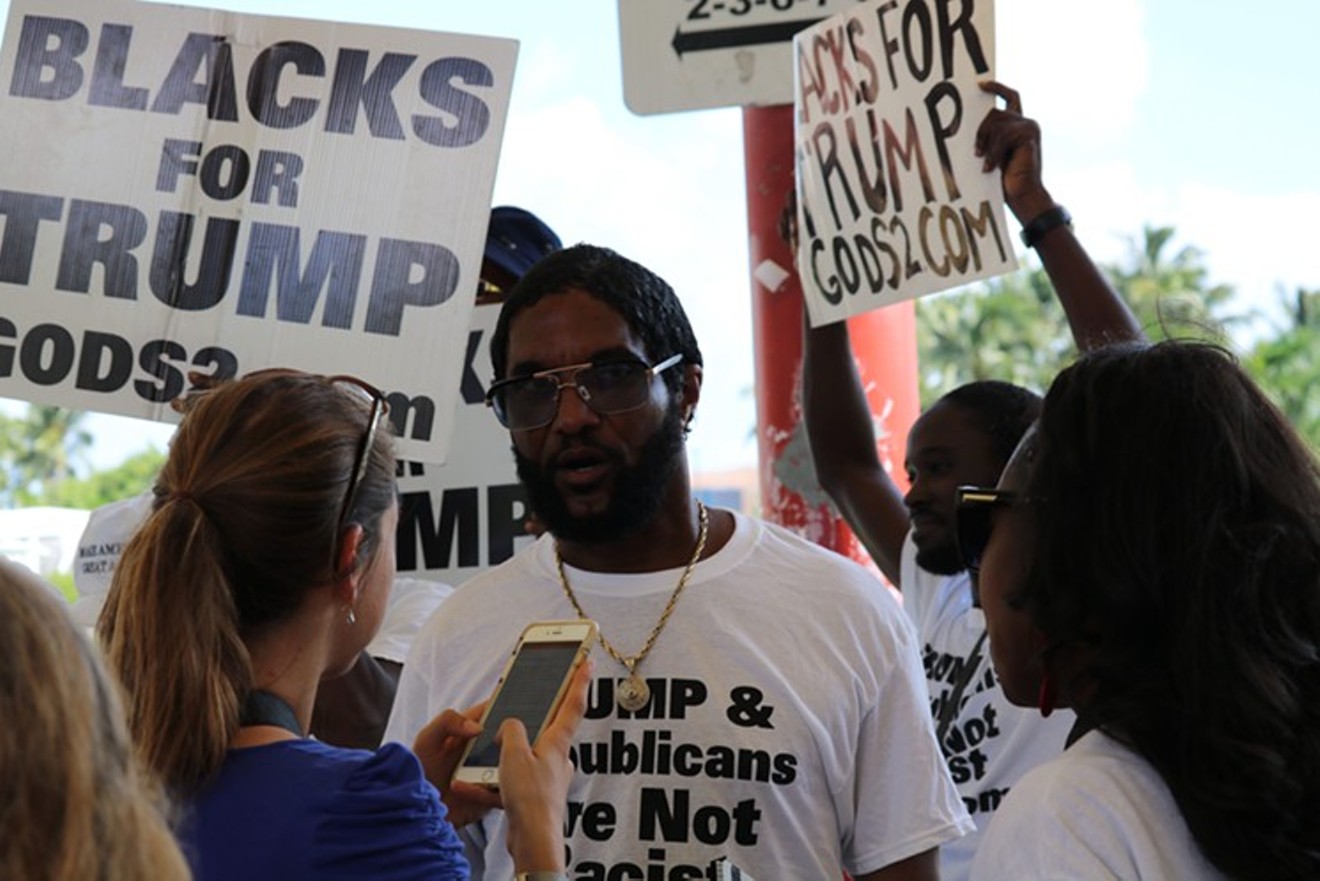 Michael the Black Man at a Donald Trump rally in Miami in 2016. Photo by Jerry Iannelli
Donald Trump's first campaign for president was already bizarre before the appearance of Maurice Woodside, AKA Michael Symonette, AKA Michael the Black Man. At an October 2016 rally, political Twitter exploded after a group of men in white T-shirts reading, "TRUMP & Republicans Are Not Racist!" stood behind Trump's podium at a rally and waved signs reading, "Blacks for Trump."

New Times, of course, immediately recognized the group leader: It was Michael the Black Man, the former Yahweh ben Yahweh cult member who was once tried for but acquitted of conspiring to kill people while he was in the cult. (Other members of the cult, including Yahweh ben Yahweh himself, were convicted of killing 14 people.)

Well, fast-forward three years, and Trump campaign officials still seem pretty darn pleased to lean on Michael for support. Today Trump spoke in Atlanta and launched a black-voter outreach campaign. Not only was Michael there with his crew, but also Trump seemingly urged the crowd to chant "Blacks for Trump!" during the rally:

Crowd breaks out in chant supporting @realDonaldTrump after he asks if they preferred "Blacks for Trump" or "African Americans for Trump" at the debut of "Black Voices for Trump," which is a new reelection coalition. pic.twitter.com/KUH8jy4LiI

Bumped into a van load of “Blacks for Trump” folks walking into GWCC. I was so caught off guard I couldn’t (didn’t really want to) get a good picture. pic.twitter.com/uN3yZ2ZF4V

The Florida-based group Blacks for Trump traveled to Atlanta today to support @realDonaldTrump’s launch of the “Black Voices for Trump” coalition. pic.twitter.com/C2cejZS5zk

Of course, Michael's involvement has sort of been a long time coming. He and his crew began getting involved in Tea Party politics more than half a decade ago — even though New Times reported in a 2011 feature story that Michael had essentially resurrected aspects of the murderous Nation of Yahweh after his trial ended. That year, New Times reported that Michael had been living in a series of hand-me-down mansions left over from Yahweh ben Yahweh's glory days. He routinely throws parties at the properties and, per that 2011 story, runs his own strange organization, the Brothers of Superior Status, or BOSS — a group of about 20 men who live rent-free on Michael's properties, listen to his sermons, and help tend the grounds.

Today is just the first day of the campaign for the coalition Black Voices for Trump. At least the public can rest soundly knowing the inaugural rally was totally normal.
KEEP MIAMI NEW TIMES FREE... Since we started Miami New Times, it has been defined as the free, independent voice of Miami, and we'd like to keep it that way. With local media under siege, it's more important than ever for us to rally support behind funding our local journalism. You can help by participating in our "I Support" program, allowing us to keep offering readers access to our incisive coverage of local news, food and culture with no paywalls.
Make a one-time donation today for as little as $1.