Trump National Doral in Miami Photo by Michele Eve Sandberg
In its ongoing efforts to plan for hurricane season amid the COVID-19 pandemic, Miami-Dade County is negotiating with Trump National Doral Miami to use the resort's hotel as an emergency shelter.

Medical professionals have warned that traditional shelter methods might pose a risk because grouping people together in an enclosed area during a pandemic could inhibit social distancing and lead to the spread of the novel coronavirus. As a possible solution, Miami-Dade County is looking to rent hotel rooms to shelter residents in the event of a storm.

According to Frank Rollason, Miami-Dade's director of emergency management, one hotel that meets the county's criteria is Trump National Doral. The county is assembling a list of other hotels that qualify as potential shelters, but Trump National Doral is the only one where negotiations are underway.

Rollason explained to New Times that he passes Trump National Doral on his way to work at Miami-Dade Fire Rescue headquarters only a few blocks away. He said he could see the hotel was a potential fit as a hurricane shelter, so he drove in one day earlier this summer to open negotiations.

Rollason said the management team at Trump National Doral has yet to decide whether the resort will remain open if a hurricane hits or if it will have enough staff available to care for people. He said Miami-Dade County would negotiate the lowest possible flat rate for rooms, as it has done with other hotels for other purposes. (The Red Roof Inn, for example, has been used to shelter the homeless.) The money would be paid from the county's emergency fund or logged as a virus-related expenditure, and Miami-Dade would seek reimbursement through the Federal Emergency Management Agency (FEMA) or the Coronavirus Aid, Relief, and Economic Security (CARES) Act.

While President Donald Trump said he resigned from his positions at his myriad companies in 2017, he still owns a stake in the Trump brand and receives revenues from Trump National Doral, according to his 2019 financial disclosure.

Because Trump still makes money from the brand, the use of his hotels by foreign and domestic politicians has become a subject of substantial investigation and debate.

Some legal experts believe that for a local government to do business with Trump's hotels — as Miami-Dade County has suggested — would violate the Domestic Emoluments Clause of the U.S. Constitution.

"The president can't make money from federal or state governments apart from his congressional salary. This situation would appear to trigger that and cause a problem," says Jordan Libowitz, a spokesperson for the nonpartisan group Citizens for Responsibility and Ethics in Washington.

Trump National Doral has struggled since the president took office, and it was battered along with the rest of the hospitality industry by COVID-19. At least 560 employees were laid off or furloughed from Trump National Doral because of the pandemic. Late last month, the New York Times reported that Trump hotels nationwide plan to furlough or lay off at least 1,500 employees and that the Doral resort continues to see low room occupancy.

Along with his day job, Gimenez is running for a congressional seat, facing off against fellow Republican Omar Blanco in the upcoming August 18 primary and, should Gimenez win, against incumbent Democrat Debbie Mucarsel-Powell in November.

The mayor announced his run for the House of Representatives in January, with an endorsement from Trump. Since then, Gimenez and the president have diverged on some issues, including the coronavirus response. (Notably, Gimenez has mandated that facemasks be worn in Miami-Dade County, while the president has repeatedly refused to wear a mask.)

The mayor's office was unable to make Gimenez available for an interview Monday, Tuesday, or Wednesday of this week. On Wednesday, at the request of a spokesperson, New Times sent the mayor a list of questions, including one that asked whether he is aware of the county's negotiations with Trump National Doral.

Patricia Abril, a spokesperson for Gimenez, responded via email that the mayor's office was swamped and that the county's Emergency Operations Center "is primarily charged with this matter."

The Miami-Dade mayor has come under fire from opponents for allowing construction projects to continue amid the pandemic after multiple developers backed his congressional campaign.

In the case of the hurricane shelter, Libowitz says, even the appearance of a conflict could be problematic.

"If the county helps pull up a struggling hospitality company owned by the president, does the president then show any form of gratitude?" The Emoluments Clause, Libowitz says, "prevents those kinds of questions."

One of the Constitution's two so-called Emoluments clauses that prohibit the president from receiving gifts or payments from foreign dignitaries or local government leaders, the Domestic Emoluments Clause forbids "any other Emolument [beyond a fixed salary] from the United States, or any of them." An emolument can be any advantage, profit, or gain.

Libowitz explains that the clause is intended to keep the president above reproach and to prevent politicians from buttering him up and expecting favors in return. Other presidents, including George H.W. Bush, Bill Clinton, and George W. Bush, divested their assets when they entered office so as not to run the risk of violating the Emoluments clauses. But Trump did not follow suit — meaning any money paid to the president's businesses by a government entity could present a problem.

This isn't the first time the use of Trump's properties has raised questions related to the Emoluments clauses. In 2019, NBC News reported that dignitaries from at least 22 foreign governments had visited Trump hotels, drawing criticism and creating the appearance of a potential conflict of interest.

More recently, critics have scrutinized the ways the Trump family has benefited from government funding through the CARES Act and from FEMA, asserting that the arrangement constitutes an ethical and legal dilemma.

Rollason, the Miami-Dade emergency management director, told New Times the county has identified only a handful of hotels that would fit the necessary requirements for use as a hurricane shelter. A facility must lie outside of storm-surge zones near the coast and along inland waterways and must be accessible via indoor hallways in order to allow access for emergency workers to safely check on sheltered people during a storm.

Rollason shared a map the Office of Emergency Management is using to identify hotels and motels that might qualify. With very few exceptions, they're located west of Miami International Airport. All are north of State Road 836. 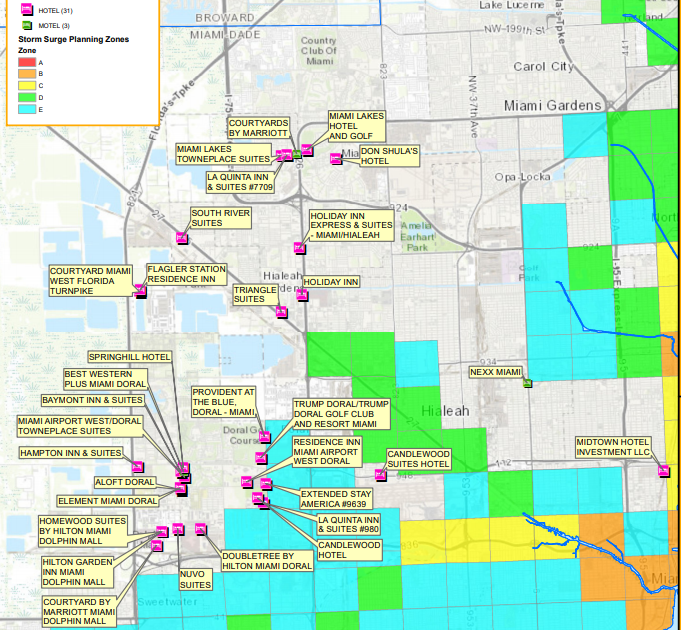 A map of hotels and motels outside of storm surge zones in Miami-Dade County that could potentially be used as hurricane shelters.
Screenshot courtesy of Miami-Dade County
Miami-Dade County has about 40 existing hurricane shelters, most of which are schools. Rollason said the county normally only needs to open eight or ten during a storm, but if a hurricane hits this year, it will open 20 to allow for more space for social distancing. (He said the county won't open all 40 because some might be in flooded neighborhoods or areas hit especially hard by the hurricane.) The county is looking at hotels in addition to traditional shelters because hotel rooms can keep people who potentially have COVID-19 separated from others, Rollason said.

According to Rollason, no deal has been finalized between Miami-Dade and Trump National Doral.

A spokesperson from Trump National Doral did not respond to requests for comment from New Times.

The president is expected to visit the U.S. Southern Command in Doral on Friday.

Meanwhile, Citizens for Responsibility and Ethics in Washington is suing the president in Washington, D.C., and Maryland for the use of his hotels by government officials, citing the Foreign Emoluments Clause because foreign dignitaries have spent hundreds of thousands of dollars at Trump properties.

"We believe that the law is clear — he is unconstitutionally benefiting from his hotels," Libowitz says.
KEEP MIAMI NEW TIMES FREE... Since we started Miami New Times, it has been defined as the free, independent voice of Miami, and we'd like to keep it that way. With local media under siege, it's more important than ever for us to rally support behind funding our local journalism. You can help by participating in our "I Support" program, allowing us to keep offering readers access to our incisive coverage of local news, food and culture with no paywalls.
Make a one-time donation today for as little as $1.