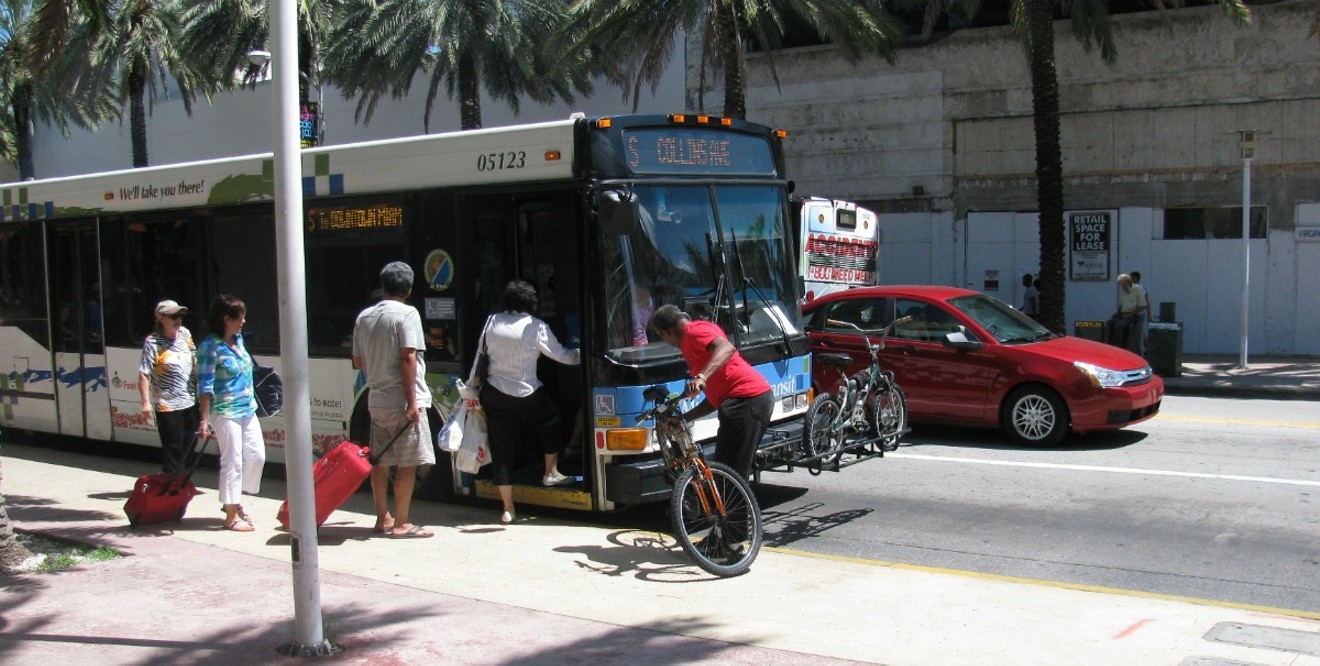 Milton Jung via Flickr Creative Commons
Though 7.7 million people ride public buses, Metrorail, and Metromover every month, Miami-Dade makes no apologies for its hellish transit system. In a move that seems to favor ridesharing and commuting by car, the county has promised to make massive budget cuts in public transit over the next fiscal year.

To save $24 million, the county's current transit proposal would cut 8 percent of Metrobus’ $248 million and 6 percent of Metrorail’s $75 million budget. Bus routes would be eliminated, operating hours would be reduced, and wait times for trains would increase.

As county commissioners get ready to review the proposal in the first of two hearings September 7, some outraged residents are organizing to fight the cutbacks.

“Even if you don’t use transit, there are good reasons for you to support the public transportation system,” says Marta Viciedo, founder of Transit Alliance Miami, a group rallying opponents of the cuts. “It reduces congestion and improves mobility for the community, not just the individual. It’s an investment in the collective quality of life.”

Viciedo thinks few Miamians, including regular public transit users, know about the looming cuts. She fears that once the plan goes into effect October 1, many commuters — especially lower-income workers — will be “blindsided” when it becomes more difficult to get to their their jobs every day.

In fact, many people she's spoken with think the county is expanding the rail system, not shrinking it. The confusion, she says, stems from announcements related to Mayor Carlos Gimenez’s Strategic Miami Area Rapid Transit (SMART) Plan, which is separate from the county’s budget proposal.

During his re-election campaign in 2016, Gimenez unveiled a plan to install rail lines in six corridors around Miami-Dade, re-committing the county to their original promise. Later that year, a consultant estimated the SMART Plan would cost $6 billion. When commissioners urged him to push the plan forward anyway, Gimenez said, “Right now you can’t afford rail on both the north and the south corridors. You can’t. In fact, you might not even be able to afford rail on one corridor.”

In April 2016, the county officially adopted and endorsed the SMART Plan, but little progress has been made since then. Thus far, the county has only initiated project development studies on the six corridors, which critics say is merely taking money away from Metrobus and Metrorail maintenance. As for the county's promises of rail expansion, "[they were] just opinions being expressed prematurely,” says Viciedo.

Regardless, Viciedo says she can’t understand why the county is divesting from mass-transit services while the funding for other departments has gone relatively untouched. Faced with long commutes, heavy traffic, and expensive tolls, many people rely on public transportation over driving personal vehicles even if the quality of public transit is lacking.

In particular, Metrorail could use better upkeep, she says.

"It's either packed or it's breaking down or it's not on time," she says. "Many people still prefer the Metrorail, but the problems are impacting their ability to get to work, so why are we taking millions of dollars in maintenance away from something that is already making them late?”

Gimenez's answer: In a recent interview with the Miami Herald, he argued that people have begun to switch to Uber and Lyft, preferring the comparably priced, comfortable options to public transit.

The county's transit department confirms that ridership is indeed down. According to Karla Damian, transportation spokesperson, declines in Metrobus and Metrorail ridership were respectively 10 and 5 percent, resulting in a decline in revenue as well.

However, Viciedo says there's a chicken-and-egg question in that assumption. The influx of Uber and Lyft hasn't resulted in lower public transit ridership, she believes; rather, the poor quality of public transit has forced commuters to resort to ridesharing services.

“There’s just no data to support the county’s belief that Uber and Lyft are taking away transit riders," she argues. "It's more that they simply haven't provided a service that people can confidently use to get around.”

Public transit should be improved, she says, not traded out.

Her group, Transit Alliance, plans to attend the September 7 county hearing to protest the funding cuts.

“Our goal is to fully restore the transit budget and ensure that operations and maintenance is taken care of,” says Viciedo, who hopes at least 50 community members will provide testimonies in front of the board of commissioners.

“Miami-Dade County has a history of challenges with transportation," she says. "Now is the time to get it right, and we need all of the voices at the table."

Correction: An earlier version of this story misidentified who claimed that riders are leaving trains and buses for Lyft and Uber. That claim was made by Miami-Dade Mayor Carlos Gimenez.