Textured Waves founders Chelsea Woody, Gigi Lucas, Danielle Black Lyons, and Martina Duran. Photo by Bethany Mollenkof/Courtesy of The Seea
One year ago, surfer Gigi Lucas stood for the first time in the soft, warm sands of NaNa Dune outside of Jacksonville and experienced a rare feeling: a sense of privilege as a dark-skinned Black woman.

Lucas, an athletic beauty with an enviable crown of dreadlocks, is acutely aware that the surfing lifestyle she adopted as an African-American woman wouldn't have been possible only a few decades prior. "Overwhelming gratitude" swept over her on American Beach, which contains a history lost to the larger world and even to some in her own community. The 33-acre stretch of shoreline was purchased by Florida's first Black millionaire, A.L. Lewis, in 1935 to provide beach access to Black residents at a time when many beaches were deemed white-only. He advertised it as "recreation without humiliation."

Little is known about the history of segregation in many such beach towns in Florida and across the U.S. But a surf collective called Textured Waves wants to change that. Founded in 2019, the group aims to be a voice for Black women and other marginalized people who feel underrepresented in the predominantly white and male surf community. The group's latest project, ROOTS, documents and showcases beaches with historical significance to the African-American community, including several in the Sunshine State.

"I started in Florida because that's where I was born and raised," says Textured Waves co-founder Martina Duran, who is from Miami.

Duran started the collective with Lucas, a Tampa native, and California surfers Chelsea Woody and Danielle Black Lyons after the four women found each other on Instagram. For them, the ocean has distinctly feminine energy.

"We innately feel this deep connection, and we know this space is ours," they say in a recent Instagram video. "This is what Textured Waves is about." 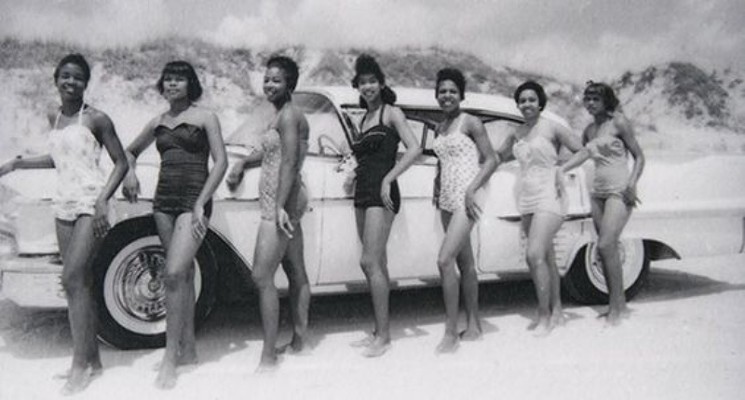 Bathing beauties pose alongside Mrs. Lizzie Lunsford's Cadillac in 1958.
Photo courtesy of Marsha Phelts
Shared narratives and histories that don't get taught in school have inspired the women to reconnect with a forgotten legacy and to celebrate the beach as a positive place of equality and acceptance. ROOTS is a nostalgic love letter about the hidden Black history of beach life, digitally curated by women of color who experience the sea as a safe space.

"The grand vision is to educate our followers and give African-Americans a starting point for visiting areas to reconnect with their heritage," Duran explains. "There appears to be systemic erasure of our history while simultaneously preserving the European."

Water has great spiritual significance for communities of color. Some say there is magic in the sea, healing, a whisper in its waters. Yemonja is the ocean's patron water spirit, a protector of women, in the Yoruba religion. West Africans still worship her as a deity; Brazilians and Cubans, as a goddess of the sea.

Yet the coastline holds trauma for the Black community. At the main ports of the slave trade, American waters claimed many Black lives. Duran acknowledges we "lost so many of our ancestors" coming here. Then, segregation came to the nation's shores.

ROOTS, an ongoing visual series, started as a way for Textured Waves to create social media content about places of historical significance to the African-American community across the U.S. Until the pandemic limited travel, the plan was to share biweekly posts from the road, showcasing lesser-known but important beach communities from state to state.

To kick off the project, the women started in Florida last year. The earliest posts celebrate Floridian beach life at its best; American Beach, Butler Beach, and Fernandina Beach serve as the backdrop. Vintage photos show Beach Blanket Bingo-worthy vacationers posed as bathing beauties experiencing the Gidget-inspired lifestyles of the '50s and '60s — but the carefree, smiling faces of the women looking back are all Black.
click to enlarge

A photo from Marsha Phelts' book, An American Beach for African Americans .
Photo courtesy of Marsha Phelts
Duran says people should "question why there isn't a ton of historical imagery of Black beach culture," especially since that way of life often brought prosperity to African-American communities on the coast. In Florida, American Beach and Butler Beach didn't just transform their communities; they thrived with Black-owned businesses and became the sites of civil-rights protests and other history-making moments. American Beach attracted notable Hollywood elites Ray Charles, Cab Calloway, and Zora Neale Hurston; Butler Beach was named for Black entrepreneur Frank B. Butler.

Duran and Lucas shared some of that history on their Instagram and blog in March after exploring Florida's coasts as part of the ROOTS project. Although they're both self-described water babies who were raised on saltwater and sand, they each only considered surfing later in life because they didn't see anyone like them on the waves when they were growing up.

Part of Textured Waves' mission is to push for more representation in mainstream depictions of surfing, including in advertisements. So far, the women have been featured in videos produced by Adidas, The Gnar Gnar Honeys, and Seea Swimwear.

"The lack of inclusive commercial imagery created the illusion that Black people never were in these spaces," Woody told Highsnobiety recently.

Because of the COVID-19 pandemic, the ROOTS project is now on hold. But the women of Textured Waves plan to visit more beaches in Florida and beyond once they can safely do so.

Lucas' last blog post says: "Here we are, a complex and colorful community of surfers, freedivers, and water photographers, finally establishing our place in the pages of history. The greatest part is that the best is yet to come."
KEEP MIAMI NEW TIMES FREE... Since we started Miami New Times, it has been defined as the free, independent voice of Miami, and we'd like to keep it that way. With local media under siege, it's more important than ever for us to rally support behind funding our local journalism. You can help by participating in our "I Support" program, allowing us to keep offering readers access to our incisive coverage of local news, food and culture with no paywalls.
Make a one-time donation today for as little as $1.
Falene Nurse is a freelance writer who attended college and studied in Florida. A digital nomad, she has lived and worked in London, Los Angeles, New York, Miami, and the Caribbean.