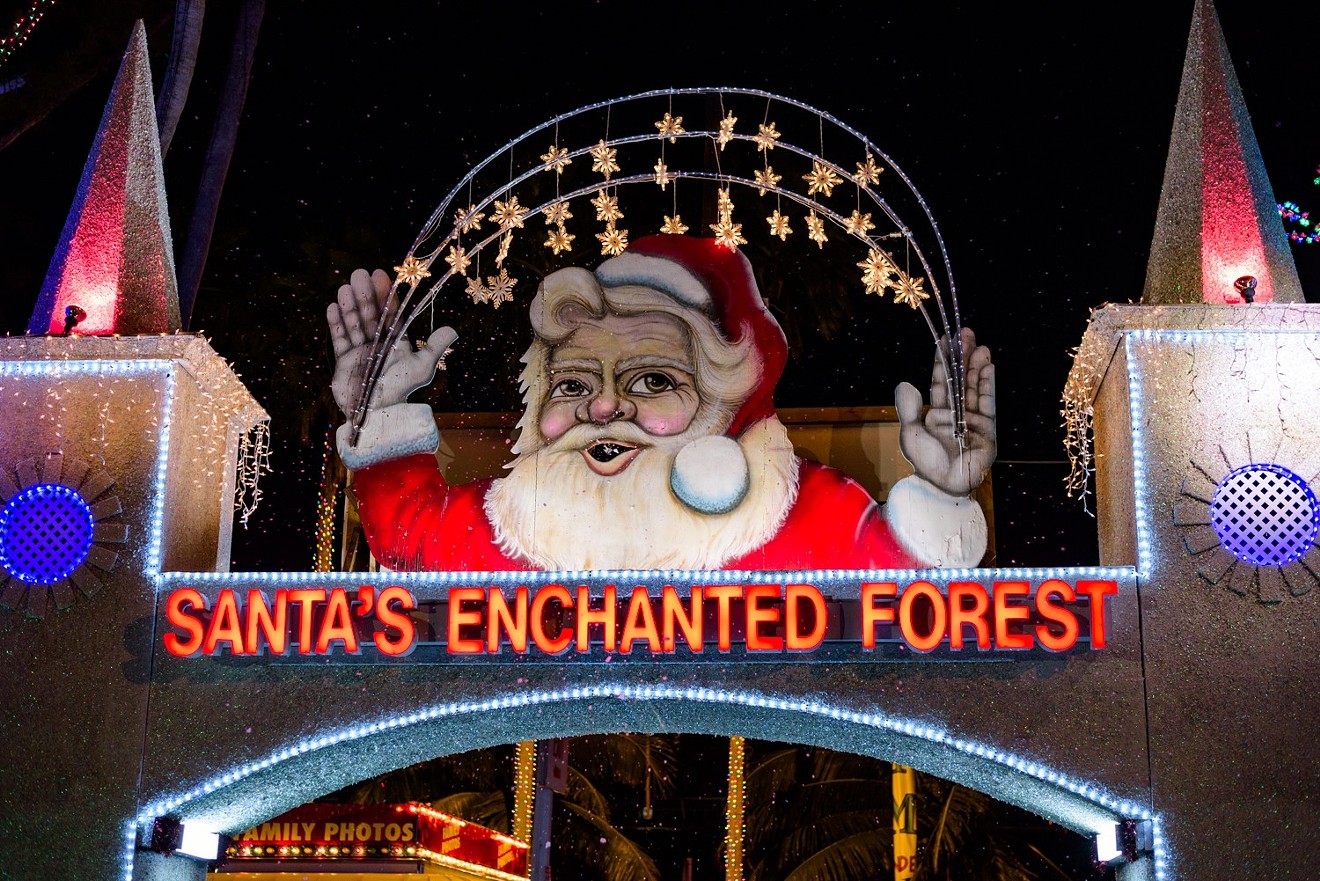 As its opening date fast approaches, the event has been left in limbo thanks to a slew of code violations courtesy of Miami-Dade County. In recent weeks, it appeared as if tiny tots across South Florida, with their eyes all aglow in hopes of making their annual trip to the Enchanted Forest, might be met with a proverbial lump of coal.

On October 4, the event's organizers were issued a cease-and-desist order by the Miami-Dade Department of Regulatory and Economic Resources (attached at the bottom of this story). The department insists it's not being a Grinch: according to county spokesperson Tere Florin, the event organizers had failed to comply with 27 citations and a previous stop-work order issued for starting construction at the event site without the required permits.

While organizers are still working to secure the permits, Santa's Enchanted Forest spokesperson Maritza Gutierrez says these hiccups won't disrupt the holiday spirit –– and the event will proceed as planned next month.

"All the advertising is being placed, and soon we'll be kicking off just like normal," Gutierrez tells New Times.

After leaving its longtime home at Tropical Park in 2020, and following a brief move to Hialeah Park in 2021, Santa's Enchanted Forest relocated to a spot at the border of Medley and Doral this year. The new site is reportedly owned by the wealthy Dunn family, who hold large swaths of land in the Miami area.

Because the property is situated at an awkward location at the intersection of soon-to-be annexed areas in Medley and Doral, event organizers thought they only needed to apply for permits with the City of Medley, Gutierrez says. As it turned out, they needed to apply with the county as well, she says.

Florin says Santa's Enchanted Forest is working with county staff to bring the property into compliance "as quickly as possible" in time for the event on November 9.

The Department of Regulatory and Economic Resources, which handles building, development, and consumer protection, has advised organizers what needs to be to done to address their improper storage of reclaimed asphalt and submit a storm water management plan.

Among the conditions for compliance, the Enchanted Forest organizers had to cough up roughly $20,000 for the citations before any permits would be issued. (Florin says they paid it earlier this week.)

While Gutierrez says the event operators immediately "hit the brakes" on work at the property and applied for permits with the county, they were still fined $13,000 for putting up displays and a chain-link fence.

"They got a fine, which they're taking care of," Gutierrez says, "and they're now working with the county for the permitting."

Florin says that Santa's Enchanted Forest is currently allowed to do some work on the site –– including installing holiday decorations, string lights, and temporary fencing for the holiday displays. However, she notes that "without proper environmental remediation," the event won't be able to proceed.

The event is scheduled to run from November 9 to January 8, 2023, according to its website.