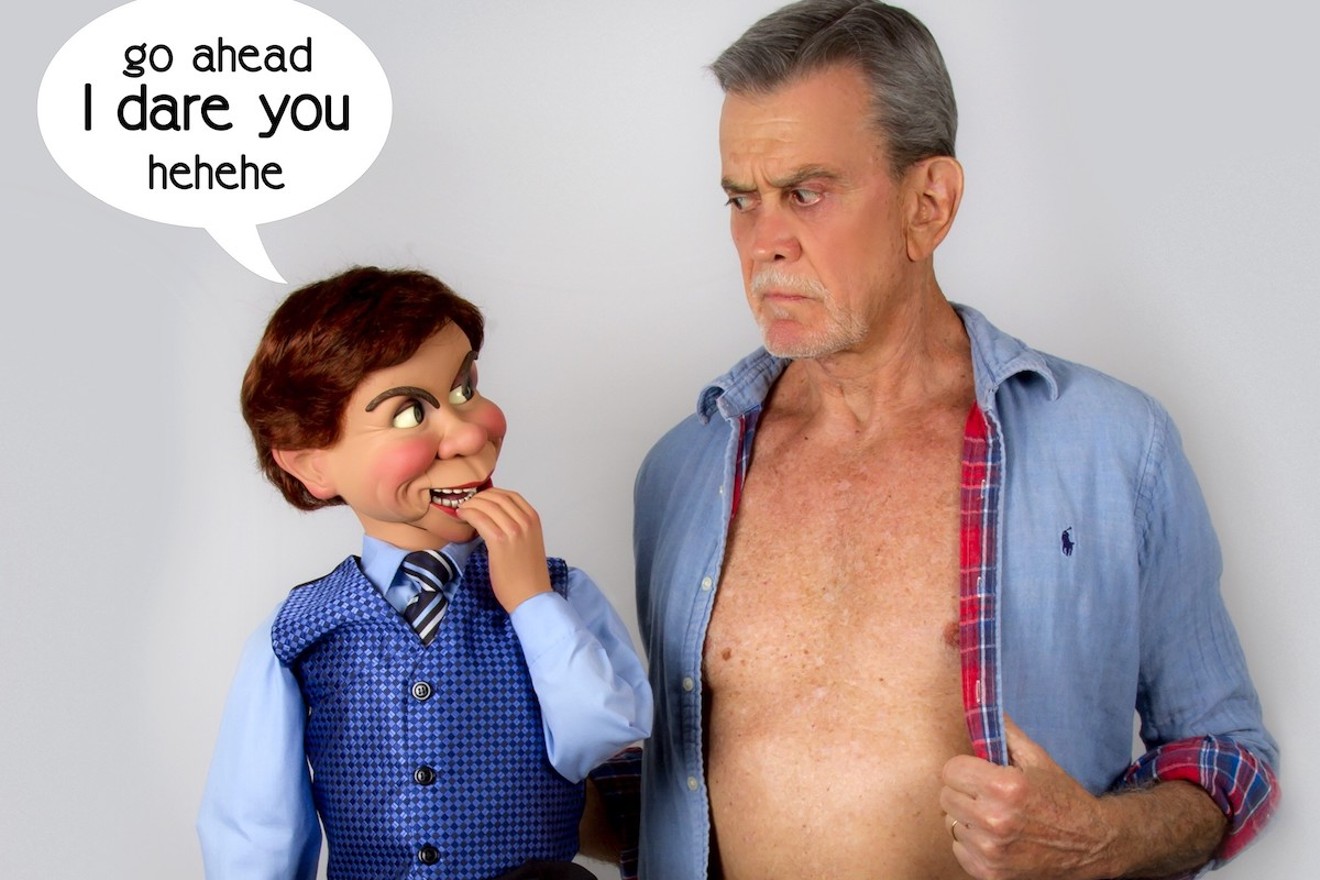 While on vacation with his wife in October 2018, the former City of Miami cop picked up a pen and paper to write a script for what he thought would be a kids' ventriloquy show. In the '80s, he and his puppet Buster regularly appeared on The Sunday Funnies, a locally produced children's show that aired on Channel 7. Schwartz, who was a trained actor before trading the stage for a badge, knew he wanted to get back into performing after retiring from the police force in 2008.

"Buster always seemed to be calling me from his trunk," Schwartz tells New Times. "He'd say, 'Come get me.'"

While Schwartz was writing the script, he says, Buster took on a different persona altogether from the sweet puppet who used to do children's shows. He was mean, and he told dirty jokes. The kids' show turned into a dark comedy for adults.

"I've spoken to other playwrights, and they've told me sometimes a character will take over the play for you and write," Schwartz says. "This is how the play turns dark. Buster gets evil on me."

The play, The Naked Ventriloquist, begins the way Schwartz's script idea began — with a preview of a kids' show that goes sideways. Schwartz calls the performance a "time-travel play" that confronts demons from his childhood, young adulthood, police work, and family life. Schwartz says the play is a funny personal story about the human mind, "a dark place to be running around without a flashlight." Bill Schwartz — the naked ventriloquist — and his puppet Kooky.
Bill Schwartz
The three puppets onstage with him are different facets of his mind. Buster represents "the negative voices we allow in our heads that overwhelm the positive ones." A bird puppet named Kooky is Schwartz's silly and vulnerable self. And Dan the Man, the wise guy, tells it like it is and holds up a mirror to Schwartz.

Schwartz says most of the play focuses on personal struggles, but he touches on trauma related to police work.

"It's hard to totally analyze where all your demons come from," Schwartz says. "I still have bad dreams and memories from the police department that still every once in a while wake me up in the middle of the night. But I think the personal demons probably predated that, and when you mix it all together, you can be a toxic person."

The play isn't all about Schwartz, though. It's an invitation for audiences to be vulnerable along with him, to laugh at themselves a little, and to be honest about the hell we all create in our own heads.

"I didn't realize I was looking for a release until I started writing this," Schwartz says.

Oh, and about the nudity: Yes, Schwartz gets naked onstage. There are literal chains involved. But he swears it's not gratuitous.

"It's basically me taking off the chains that have confined me as a person and becoming free," he says.

The Naked Ventriloquist. 8 p.m. Friday, January 24, and Saturday, January 25, and 2 p.m. Sunday, January 26, at Artistic Vibes Miami, 8888 SW 129th Ter., Miami; 786-505-8423; artistic-vibes.com. Tickets cost $25.
KEEP MIAMI NEW TIMES FREE... Since we started Miami New Times, it has been defined as the free, independent voice of Miami, and we'd like to keep it that way. With local media under siege, it's more important than ever for us to rally support behind funding our local journalism. You can help by participating in our "I Support" program, allowing us to keep offering readers access to our incisive coverage of local news, food and culture with no paywalls.
Make a one-time donation today for as little as $1.