I was standing in the backyard of a Fort Lauderdale home rumored to be haunted, so I asked the spirit out loud if it liked coconuts. Immediately, as if on cue, a coconut crashed down from a tree nearby. Coincidence? Or proof that spirits live among us?

That's a question I repeatedly found myself asking last Thursday while out with a group of South Florida's most active paranormal researchers. My notes are filled with questions like, Did the lights flicker, or did I blink? Did a spirit lower the temperature in this room, or should I have brought a heavier sweater?

"If you open yourself up to it, you can feel the presence," paranormal investigator George Mercado told me. "I'm not the most psychic, but I definitely feel this dude."

Mercado leads a team of paranormal investigators that travels throughout South Florida to locations rumored to be haunted. The group produces short video segments that have appeared on Univision. Founded in 2008 as Team Phenomenon, they have recently reunited after a four-year hiatus and rebranded themselves as the Paranormal Bad Boys.

Asked about the name change, Mercado said, "It's because we take no shit. But we're always respectful to everyone, alive or dead."

The Paranormal Bad Boys have recently partnered with PRISM (Paranormal Research & Investigative Studies), a South Florida-based organization with the aptly named website DoYouSeeDeadPeople.org. Together, Prism and the Paranormal Bad Boys go to Florida locations to investigate whether they might be haunted. This past weekend, they visited a one-bedroom home owned by Richard Joyner and his sister Kathy Leikauf on the Tarpon River in Fort Lauderdale.

The earliest historical record Joyner has been able to find of the home is a 1924 fire insurance map from the Fort Lauderdale Historical Society. The home was once located next to a bridge and was the home of the bridge tender when Fort Lauderdale was still part of Dade County. After a new bridge was built in the '50s, a local contractor bought the home in 1969 and renovated the exterior with keystone rock. The home won a few architectural awards in the '70s and is rumored to have been the location of raging parties over the next decade.

Joyner grew up in the neighborhood and fished in the river nearby as a teenager. "I used to tell my friends that someday I would own that castle," he said with a chuckle. He now uses the home as a guest house and rents it out on Airbnb. He said some guests have complained of strange noises at night, but he wondered if it could just be the river. PRISM and the Paranormal Bad Boys were there to figure out if the noises were a coincidence or something more.

"We've been to a lot of freaky places, covering the history of South Florida," Mercado said. "The past always has the answer." 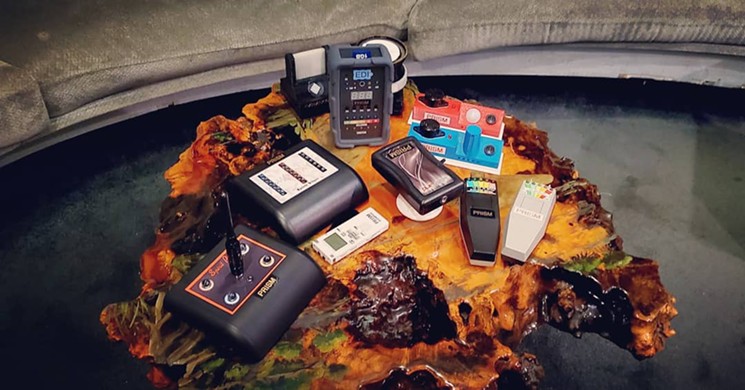 Ghost hunting is basically a game of 20 questions. Rodriguez and Mercado asked a series of questions to the room, such as Were you the bridge tender? Are you related to him? Were you the man who threw parties in this house? Did you ever overdose here? They then repeated the questions in Spanish and monitored their equipment to measure if someone might be responding.

"It's like a puzzle," Mercado said. "The technology helps you know what questions to ask. It guides you to the location."

The equipment was set up downstairs, and various men went upstairs to ask various questions. Sometimes the equipment did nothing, and sometimes their lights flashed. Some of the technology they use included devices that measure energy, frequency, shadows, static electricity, temperature, humidity, and even barometric pressure. The team also checked for normal explanations for things people might be seeing or hearing, such as gas leaks, which can cause people to hallucinate.

"We ask questions and then look for changes in the atmosphere," Rodriguez said. "The barometric pressure will change with ghosts, just like it does in a storm."

One of the researchers' go-to resources is a DR60 dictation recorder developed by Panasonic in the '90s. Panasonic quickly stopped making them after a barrage of complaints that the recorder was picking up weird feedback and voices. Paranormal researchers believe that feedback is from the spirit world, and the equipment now runs as high as $2,500 on eBay. An Ovilus IV device turns static electricity into words from a dictionary but shouldn't be confused with a digital ouija board (which, of course, they also had).

"When I first started, I was terrified," said Troy Dixon, a veteran paranormal researcher. "I'm not going to lie: There are still some places that are really scary."

Rodriguez and Mercado, however, said they're never afraid. Mercado said being connected to the spirit world runs in his family, while Rodriguez said he was possessed by a spirit from the ages of 12 to 15. The possession ended when he moved out of his house, he said, but ever since then, he has sensed paranormal activity.

"Once you open that door, it's gonna stick with you forever," Rodriguez said. "Ghosts are kind of like cats, and cats always know if you're not a cat person."

When I said goodbye to the team four hours later, I asked Mercado and Rodriguez if they truly believed a spirit was with us.

"They're definitely here," Rodriguez replied. "You just have to be in the right place at the right time and ask the right questions."
KEEP MIAMI NEW TIMES FREE... Since we started Miami New Times, it has been defined as the free, independent voice of Miami, and we'd like to keep it that way. With local media under siege, it's more important than ever for us to rally support behind funding our local journalism. You can help by participating in our "I Support" program, allowing us to keep offering readers access to our incisive coverage of local news, food and culture with no paywalls.
Make a one-time donation today for as little as $1.