The Slap Heard 'Round the County: "Hey Pussy, Do You Remember Me?" 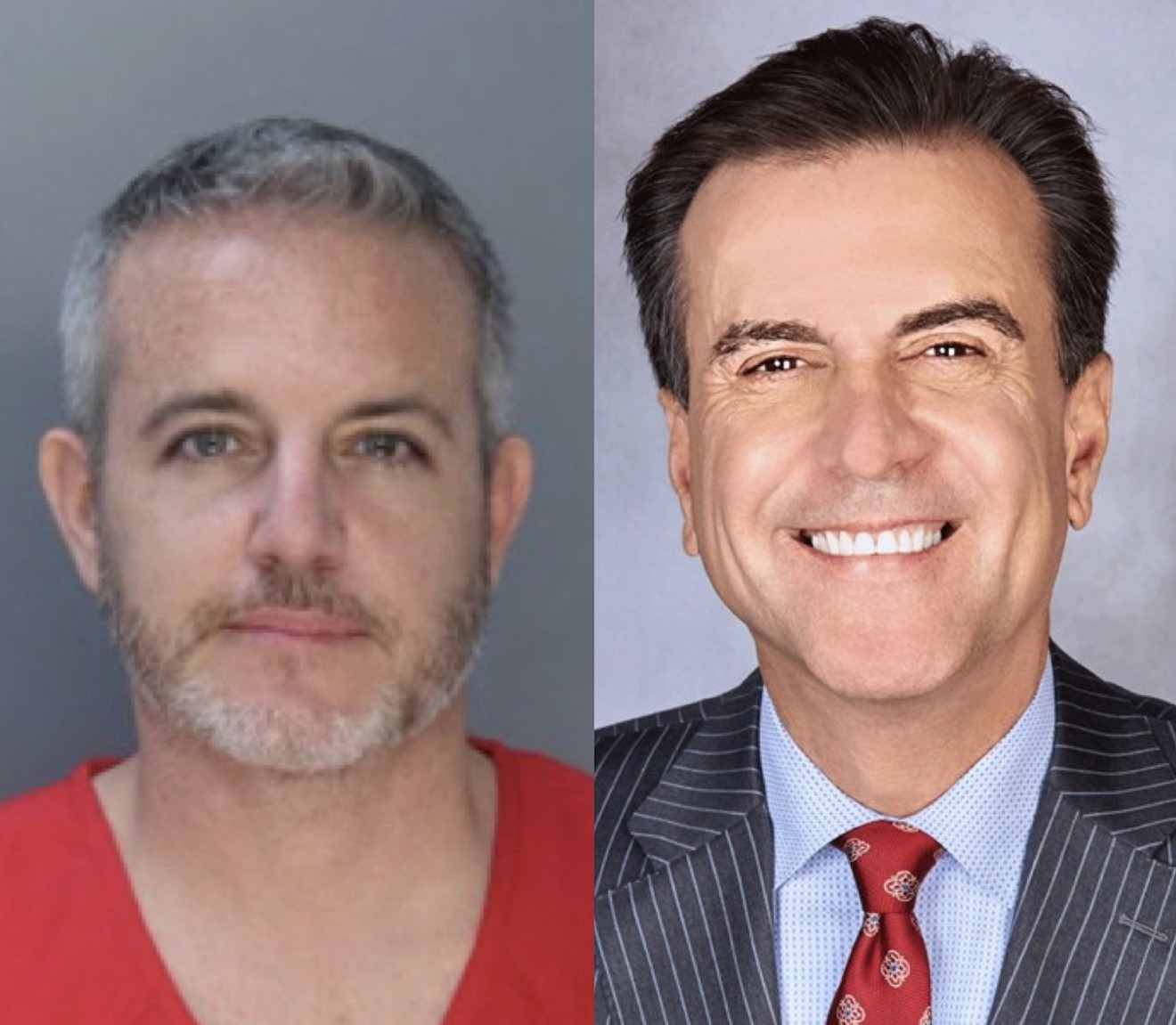 Carlos "C.J." Gimenez (left) was arrested after slapping Miami City Commissioner Alex Diaz de la Portilla (right) at Morton's The Steakhouse in Coral Gables. Photos courtesy of Miami-Dade County Corrections and Rehabilitation, City of Miami
Morton's the Steakhouse is an upscale joint in downtown Coral Gables. There are white linen tablecloths, ornate chandeliers, and a strict dress code. It's the kind of place Miami Commissioner Alex Díaz de la Portilla might indulge in a midweek afternoon lunch with his sergeant-at-arms.

So imagine patrons' shock when the son of U.S. Congressman and former Miami-Dade County Mayor Carlos A. Giménez, Carlos "CJ" Gimenez, suddenly approached the commissioner Wednesday afternoon and said, "Hey pussy, do you remember me?" and then "struck" Díaz de la Portilla on the "side of the head with an open hand," according to a Coral Gables Police Department (CGPD) arrest report that has been embedded at the end of this story.

Though it's unclear what triggered the high-profile kerfuffle — was it a protest against eating meat? perhaps it was a poorly executed besito? — the arrest report states that "the sergeant-at-arms on the detail," whom the Miami Herald identifies as Miami Police Det. Stanley Paul Noel, held Gimenez "by his coat and instructed him to stop resisting."

That's when, according to Noel, Gimenez said, "You're a City of Miami Police officer, you don't have jurisdiction here."

The Coral Gables police report cites a "mutual aid agreement" between the City of Miami and the City of Coral Gables to explain an officer of one municipality making an arrest in a neighboring one.

But local attorney David Winker raised some concerns, telling local news blog Political Cortadito that the arrest was "improper" and calling for "an independent investigation of the actions of City of Miami officers making the arrest in Coral Gables and review of Miami Commissioners traveling with 'sergeant-at-arms' to other jurisdictions."

Winker did not address the issue of the CGPD arrest report itself, which was attested to by a Coral Gables police officer but whose "Narrative" was provided by an unnamed Miami sergeant-at-arms (presumably Noel).

Gimenez was detained until CGPD officers placed him under arrest and charged him with a single count of simple battery. He was booked and taken to Turner Guildford Knight Correctional Center, where his bond was set at $1,500.

In response to the incident, Díaz de la Portilla released two separate statements, one in English, the other in Spanish.

"It was more like a flick of his wrist from behind me when I was having lunch as he cowardly approached me from behind and ran away. This guy is not known as a very courageous guy. Actually he’s quite a coward and appeared to be under the influence," the English-language statement reads.

"As is the custom of this individual, he tried in a cowardly way to provoke me and like a little girl brushed my hair with his nails. Men do it from the front, and not from behind," the Spanish-language version reads.

Carlos Julio Gimenez, a 44-year-old married father of two, is a lawyer and government lobbyist in Miami-Dade County. His father, the former mayor of Miami-Dade County, was elected to the U.S. House of Representatives in 2020. CJ Gimenez's past clients include Donald Trump, whom he represented before Trump ran for president in 2016.

Back in 2011, Diaz de la Portilla was a consultant to the elder Carlos Giménez when the latter defeated Julio Robaina in a special election for Miami-Dade mayor. A year later, Diaz de la Portilla and CJ Gimenez's wife, Tania Cruz, were arrested at the swanky InterContinental Hotel in Boston, where they'd reportedly traveled on a business trip. The pair allegedly refused to comply with a security guard who was responding to complaints of cigarette smoking in one of the rooms.

The arrest, in which trespassing charges were ultimately dismissed, didn't come to light in Miami until five years later, when Diaz de la Portilla was vying for a hotly contested special election to fill a state senate seat and Cruz was assisting in his campaign. (Diaz de la Portilla lost that 2017 Republican primary to Jose Felix Diaz, who in turn was defeated by Democrat Annette Taddeo.)

And the Coral Gables catfight was just the latest in a series of controversies involving Díaz de la Portilla in recent weeks.

In early January, the city-issued SUV transporting Díaz de la Portilla and a person he later identified as his aide, Vanessa Garcia Azzam, crashed in Little Havana. No one was seriously hurt but Miami Commissioner Joe Carollo told the Herald that Díaz de la Portilla had asked him whether his name needed to be in the official crash report about the incident, prompting a call to Miami City Attorney Vicky Méndez and rumors of a coverup.

The traffic crash report from that incident has not yet been disclosed.

CGPD spokesperson Kelly Denham says there is surveillance footage and 911 audio of the incident at Morton's the Steakhouse. New Times will update this post when those records become available.