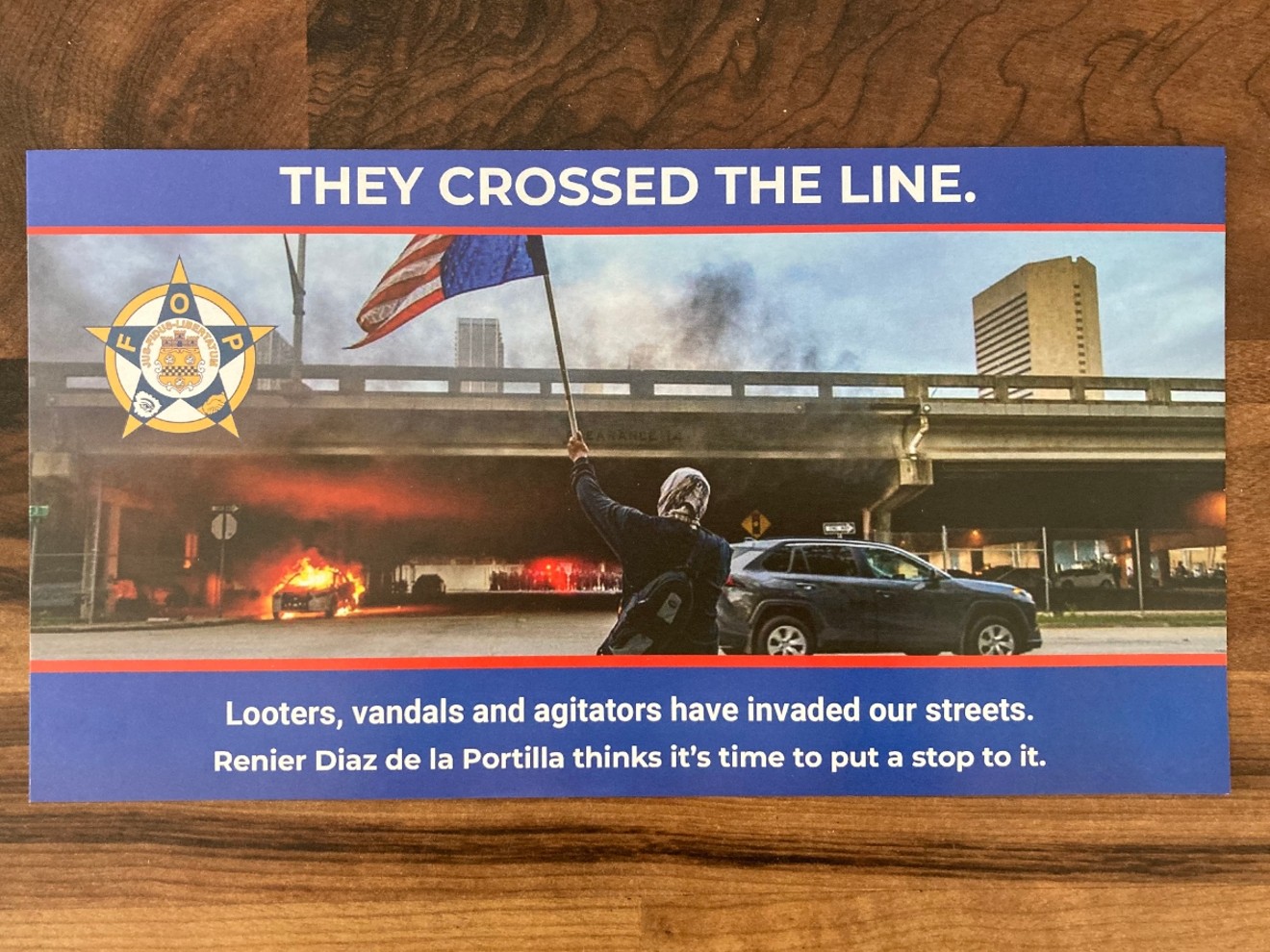 A mailer from Proven Leadership for Miami-Dade County. Photo by Jessica Lipscomb
On May 30, as protests swept the nation in the wake of the killing of George Floyd in Minneapolis, a demonstration in Miami turned chaotic as night fell.

Protesters took their march onto Interstate 95. Officers fired tear gas and rubber bullets at a crowd near a Miami Police Department parking garage. Looters targeted shops at the nearby Bayside Marketplace.

At the scene, Miami Herald photographer Al Diaz captured a striking image of a person waving an upside-down American flag while a police cruiser goes up in flames in the background.

"Looters, vandals and agitators have invaded our streets," the mailer reads. "Renier Diaz de la Portilla thinks it's time to put a stop to it."

According to Miami Herald visuals editor Orlando Mellado, the committee did not have permission to use Diaz's photo.

"This was indeed an unauthorized use of the photo, and we have sent a cease-and-desist notice to the PAC and campaign demanding they stop using the photo," Mellado writes in an email to New Times.

Photo by Jessica Lipscomb
The ad states that it was paid for by Proven Leadership for Miami-Dade County, a committee established to support Diaz de la Portilla's brother, City of Miami commissioner Alex Diaz de la Portilla, in 2018. Financial disclosures from the committee do not show any expenditures for photos or photo licensing through July 22.

Renier Diaz de la Portilla, an attorney who formerly served as a state representative and Miami-Dade school board member, is running for county commission in District 5, which includes downtown Miami, Little Havana, parts of Brickell, and most of Miami Beach. He faces incumbent Eileen Higgins and business owner Miguel Soliman.

This isn't the first time a mailer from Proven Leadership for Miami-Dade County has raised eyebrows. In May 2018, the committee attempted to tie Alex Diaz de la Portilla's opponent to Venezuelan strongman Nicolás Maduro. And earlier this summer, Elaine de Valle reported on her blog, Political Cortadito, that the PAC sent out a mailer criticizing Higgins for helping to pass a $25 million coronavirus relief fund for small businesses, which it called "corporate welfare."
KEEP MIAMI NEW TIMES FREE... Since we started Miami New Times, it has been defined as the free, independent voice of Miami, and we'd like to keep it that way. With local media under siege, it's more important than ever for us to rally support behind funding our local journalism. You can help by participating in our "I Support" program, allowing us to keep offering readers access to our incisive coverage of local news, food and culture with no paywalls.
Make a one-time donation today for as little as $1.