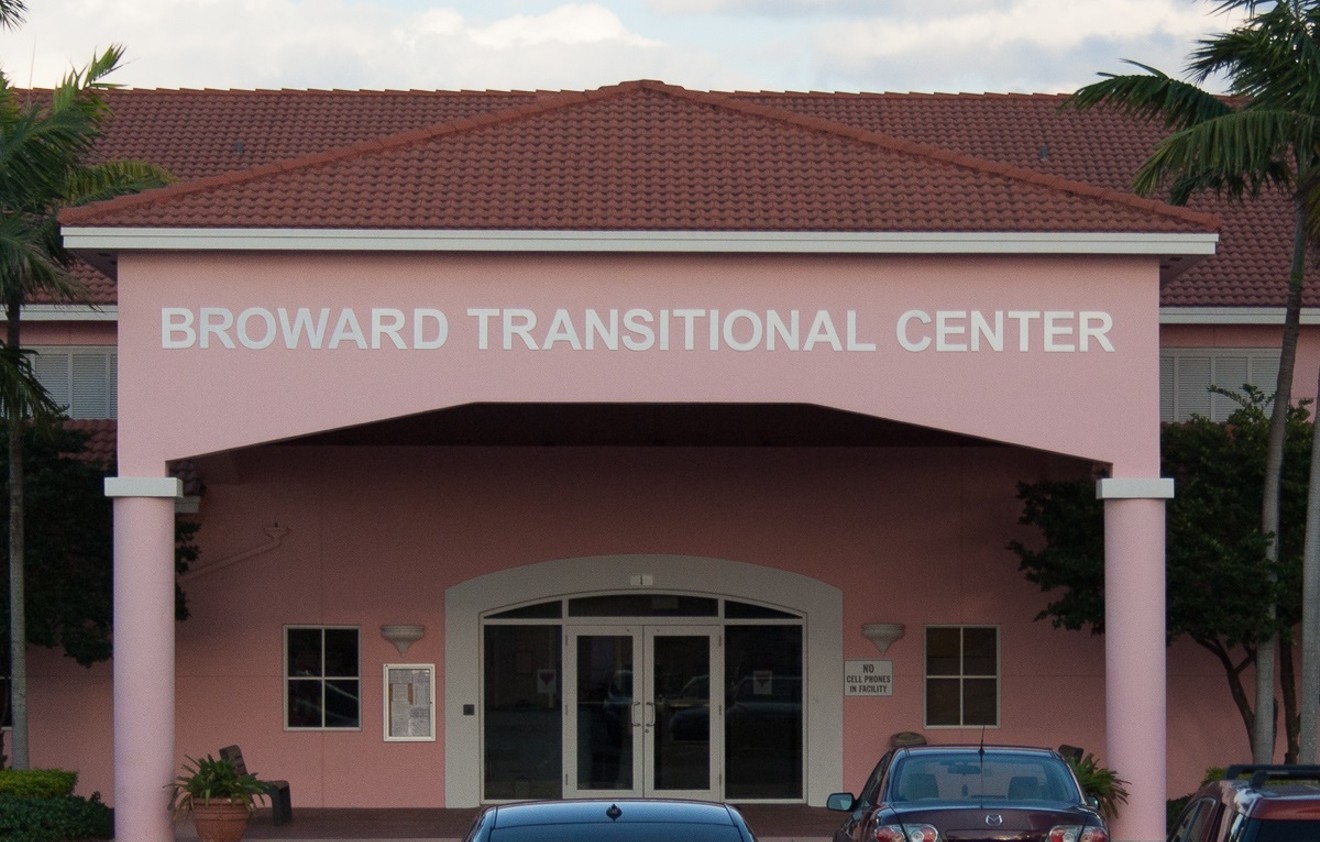 Eflatmajor7th / Wikimedia Commons
Update: Scroll down to see images from today's protest, including anti-ICE banners unfurled across the state and shots of protesters blocking roads near the detention center.

The Broward Transitional Center is basically a jail for people who haven't committed crimes. It's designed to hold "low-level" immigrant detainees slated for deportation after they've been arrested on minor charges — such as driving without a license — or picked up on no criminal charges at all.

The center is also run by Boca Raton's gigantic private-prison contractor, the GEO Group, which means a private company is making money from keeping immigrants locked up.

Given those two facts, progressive activists who oppose both the private-prison industry and the concept of imprisoning immigrant detainees awaiting deportation say they plan to stage a "Families Are Not for Profit" protest outside the facility from 10 a.m. to 1 p.m. today.

The event is hosted by immigrant-rights groups such as the Florida Immigrant Coalition, Broward Immigrant Justice Coalition, and United We Dream, as well as the Miami-Dade and Broward chapters of the Democratic Socialists of America. As of Wednesday evening, more than 60 people said they would rally outside the facility.

"Families belong together outside of detention centers. We denounce the Trump administration and elected officials who are complicit with GEO Group and corporations capitalizing on the incarceration of our immigrant communities," the organizers wrote online earlier this week. "We will be rallying outside of the Broward Transitional Center, a privately owned immigration detention center, to call for an end to the profiteering of immigrant lives."

GEO Group (previously known as Wackenhut) is a powerful firm in both Florida and D.C. politics. The corporation rains money on political candidates across the state, from Sen. Marco Rubio to gubernatorial candidate Adam Putnam to a good number of Florida Democrats. In the meantime, the firm has been sued for allegedly forcing immigrants to work for food and supplies, accused of operating a Colorado facility where detainees were and had multiple immigrant detainees die inside its facilities. GEO also has close ties to Attorney General Jeff Sessions and dumped cash into Donald Trump's presidential campaign.

The Broward Transitional Center also has seen its fair share of protests. In 2012, New Times published a profile of two undocumented activists who infiltrated the center and reported what they said were abysmal conditions. New Times later toured the facility alongside an Immigration and Customs Enforcement spokesperson.

After protests, sit-ins, a detainee hunger strike, and news of one detainee being raped with a Sharpie marker became public, 22 Democratic members of Congress demanded ICE conduct a "thorough, case-by-case review" of every immigrant detained at the facility. Eflatmajor7th / Wikimedia Commons
This past May, ThinkProgress and New Times each detailed the case of Mary Caceres, an undocumented woman with a "Dreamer" daughter living in Jacksonville. Caceres had finally obtained a valid work visa this year before ICE detained her for no reason and shipped her all over the state, her daughter said. Caceres wound up at the Broward Transitional Center.

"To me, they’re profiting off her being there," her daughter, Daniela Gaona, told New Times. "We have to pay for her commissary. Just for her to call me, it costs $20 for like 20 minutes."

But at least in some political circles, it's becoming too politically toxic to accept donations from GEO anymore. The Florida civil rights group Dream Defenders has launched anti-private-prison campaigns this year, and a huge number of Democratic candidates across Florida have signed the group's "Freedom Pledge" to refuse private-prison cash. That list includes every major Democratic candidate for Florida governor.

Banner drops across FL calling for divestment from private prison companies like GEO Group and to #AbolishICE. GEO has dumped tons of cash on FL politicians which has allowed them to operate with little opposition or regulation. Rick Scott alone has taken over $718,000 from GEO. pic.twitter.com/Teq9Nefap6

We are at the Broward Transitional Center, a private immigration detention center owned by GEO Group. Creating a profit incentive for imprisoning people and keeping them imprisoned is immoral. We call on all elected officials and candidates in FL to reject private prison money. pic.twitter.com/LZTk4ZFISO

We just blocked a major road outside the Broward Transitional Center, a private immigration detention center owned by GEO Group. We are ready to fight statewide against corrupt private prison companies. We will disrupt them just like they disrupt our families and communities. pic.twitter.com/kZe7uCC8W3